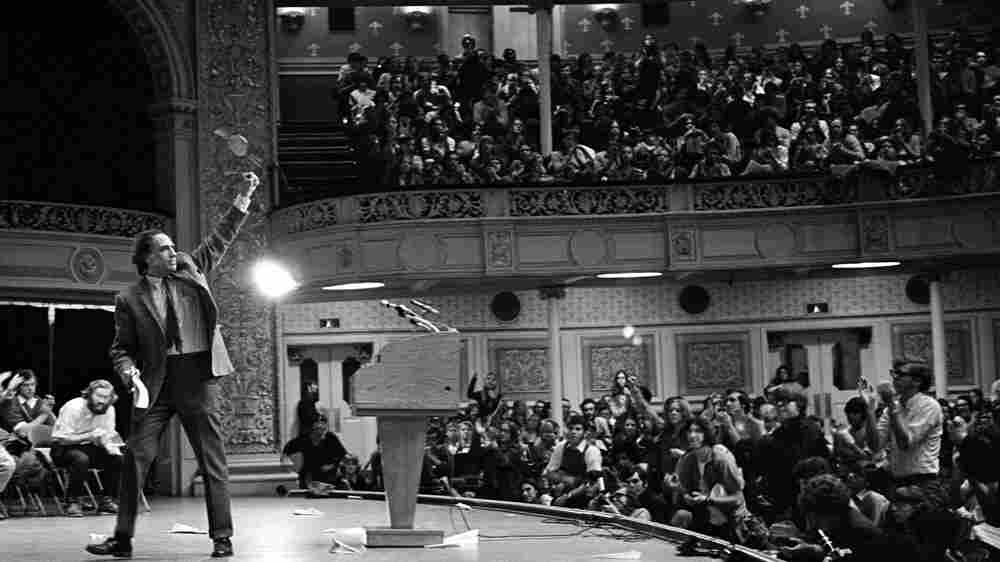 Political theater: William Kunstler, pictured at a rally for the so-called Chicago Seven, was famous for defending some of America's most polarizing people in the courts. David Fenton/Arthouse Films hide caption

Not rated: nothing offensive besides a couple of corpses and curses

As teenagers in the 1990s, Emily and Sarah Kunstler were mortified when their radical-lawyer dad turned to representing common criminals.

"We realized he was defending bad people," recalls Emily, who narrates the sisters' documentary, William Kunstler: Disturbing the Universe.

But those concerns quickly evaporate in this mostly laudatory account of the man who famously represented the Chicago Seven, Attica Prison inmates and the Indian activists of Wounded Knee. The movie does eventually return to the sisters' adolescent anxieties, but it's primarily an overview of Kunstler's career for those who've forgotten (or never heard about) his exploits.

The directors, who also wrote and co-produced the film, are the products of their father's second life. In the first, he was a World War II veteran who went to law school on the GI bill, became expert in accident law and wrote Joe McCarthy's will. He had a wife and kids, and lived in the New York suburbs.

That existence began to slip in 1961, when he delivered the ACLU's regards to an African-American lawyer who was battling segregation in Mississippi. The attorney responded that he needed more than greetings, and Kunstler took the hint. Soon he was representing Freedom Riders in the South and pursuing racial housing-discrimination cases back home in Westchester County.

"Dad taught us that all white people are racist," Emily says.

Kunstler's radicalization continued when he went to court with the Catonsville Nine, who destroyed draft records to protest the Vietnam War. One of the Nine, Daniel Berrigan, taught the attorney that the courtroom can be used for political drama. In 1969, Chicago Seven defendants Abbie Hoffman and Jerry Rubin helped extend Kunstler's theatrical range to farce.

The "power to the people" lawyer mostly won by losing, or on appeal. But he did help prevent a bloodbath at Wounded Knee, and he got the Supreme Court to uphold flag-burning as a form of political speech.

Along the way, Kunstler divorced, moved downtown, remarried and had two more children. In home-movie footage, young Emily and Sarah admiringly interview their famous father. Later, they'd have their doubts as Kunstler embraced mob boss John Gotti in public and represented the man who killed Zionist militant Meier Kahane. Yet the filmmakers don't find space in the movie for many people who shared those doubts. The principal on-screen critic is Alan Dershowitz, who appears only briefly — and whose own career hasn't exactly remained free of showboating and controversy.

Disturbing the Universe could have gone in a number of more interesting directions. It might have given equal (or at least more) time to Kunstler's antagonists, or analyzed how the attorney got high on '60s-radical self-righteousness. (In some fist-pumping clips, he comes on like a one-man Baader-Meinhof Gang, firing rhetoric rather than guns.)

The Kunstler sisters also could have turned inward, offering more insight into how their lightning-rod dad shaped their own lives. Despite the first-person viewpoint, the movie isn't especially personal.

If an introduction to William Kunstler's career is needed, Disturbing the Universe will serve. But the revolutionary attorney, who died in 1994, deserves the attention of a filmmaker who has thought harder about his legacy that his own daughters have.