Accessibility links
A Familiar Enemy For Platoon In Afghanistan When a roadside bomb last week destroyed an American armored vehicle in southern Afghanistan, it was an all-too-familiar scene for the soldiers of 2nd Platoon — an explosion, a firefight, a Medevac helicopter and a prayer. The Army platoon, part of the 5th Stryker Brigade Combat Team, has lost 11 soldiers, about one-third of the force.

One of the most lethal areas in Afghanistan for U.S. troops is the Arghandab Valley, a Taliban stronghold just outside the southern city of Kandahar. The Army's 5th Stryker Brigade Combat Team from Fort Lewis, Wash., patrols the area, facing the risk of huge roadside bombs.

One platoon already has lost 11 soldiers, and several more were seriously wounded — about one-third of the force.

One day last week, more bad news crackled over the radio: a Taliban attack and casualties in 2nd Platoon.

Responding to the call, 1st Sgt. Charles Burrow of Charlie Company orders soldiers to mount their eight-wheeled armored vehicles, called Strykers. They race toward a plume of smoke, rising above the trees just a half-mile away.

"When we get there, I need you to bring medic and link up with me. Bring whatever first aid stuff you got, and a smoke grenade," Burrow says into the radio.

The Strykers cross a bridge. A cluster of Afghan men and children look nervously at the passing convoy.

The Army vehicles bounce through a wide and barren field, alongside a dirt road. In the middle of that road, they see every soldier's nightmare: a Stryker flipped over, flames and thick black smoke pouring out — the work of a roadside bomb.

An Explosion, Then Gunfire

Bursts of automatic rifle fire rattle. Other soldiers are crouched in a drainage ditch, firing their weapons toward a tree line about 300 yards away. The Taliban have mounted what is called a "complex attack," a roadside bomb followed by a wave of fire from AK-47s. 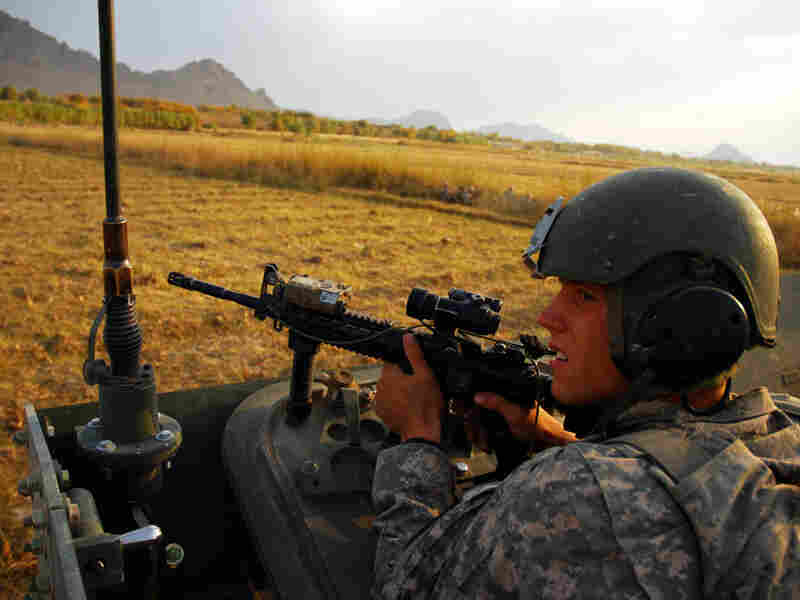 Spc. Riley Sheffield of Boise, Idaho, looks toward a tree line as insurgents fire on the convoy, just after the roadside bomb exploded. Soldiers from Charlie Company exchanged fire with insurgents for over an hour. Graham Smith/NPR hide caption 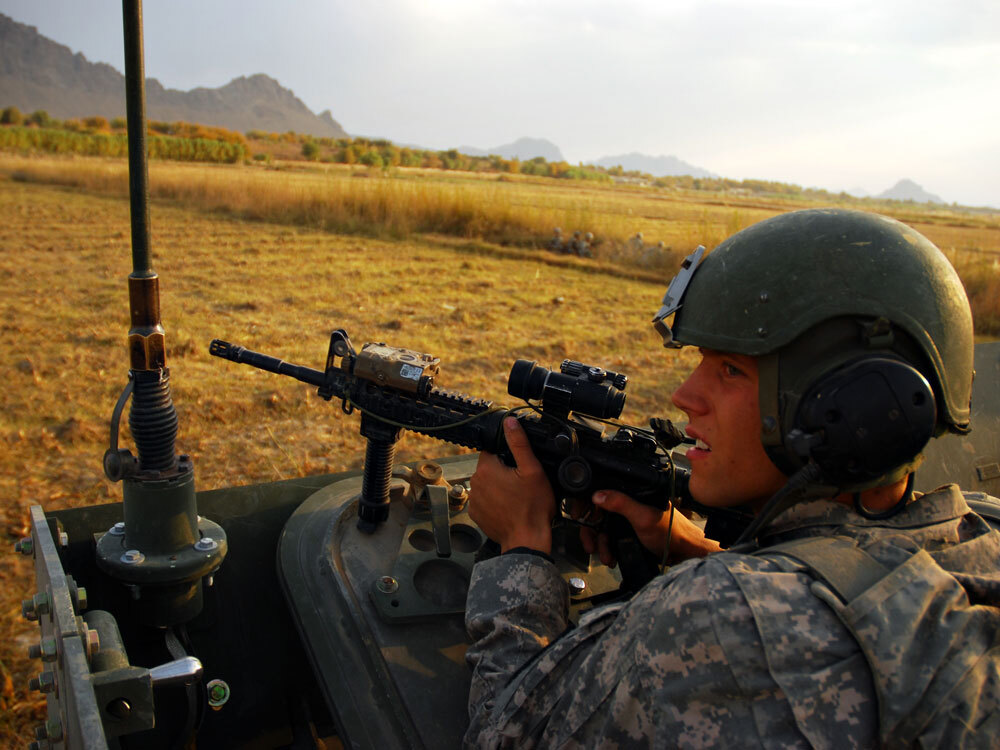 Spc. Riley Sheffield of Boise, Idaho, looks toward a tree line as insurgents fire on the convoy, just after the roadside bomb exploded. Soldiers from Charlie Company exchanged fire with insurgents for over an hour.

Gunfire crackles from both sides as the Strykers open up with their machine guns and grenade launchers.

Burrow and others move up the road, under fire, toward the wounded. Two Kiowa helicopters come over the mountains and buzz angrily just above the tree line, keeping watch for the soldiers on the ground and looking for enemies to strike.

Some of the soldiers have already jumped into the bomb crater and dug out two survivors from the roadside blast.

This platoon was supposed to be on light duty back at their base. They had lost seven men just the week before in another roadside bomb attack. On this day, they were out on a routine resupply mission down a road they often use, and got hit again.

The soldiers are still taking enemy fire, but Burrow tries to bring some order, telling some of his men to shoot toward the tree line, while directing others to take care of two wounded soldiers.

"You doin' OK?" Burrow asks one of his wounded comrades.

Lt. Brian Giroux was riding in the back of the Stryker when it flipped over, leaving him partially trapped in a crater 7 feet deep and some 28 feet across. Giroux has two broken bones in his leg.

Burrow still doesn't know how many people were in the Stryker that was hit. So he asks the other wounded soldier, Sgt. Marquel Mendiola, who is face down on a stretcher, a trace of blood crusted on his lips.

"How many total were in the truck?" Burrow asks.

"There were four of us," the wounded sergeant responds, identifying the two others: Spc. Gary Gooch and Spc. Aaron Aamot.

Gooch, 22 of Ocala, Fla., and Aamot, 22, of Custer, Wash., were in the front of the Stryker when the bomb exploded. The body of one is trapped under the burning vehicle. The other body is nowhere to be seen.

"Gooch, Aamot, you and LT — that's it, right?" Burrow says, confirming that four were in the vehicle.

While some soldiers look for their missing comrades, others attend to the wounded. Mendiola is lucky; he only has a broken ankle.

A medical evacuation helicopter lands in the field, and soldiers carry the sergeant and the lieutenant to the chopper.

Back at the Stryker vehicle, soldiers work desperately to put out the flames around the body of Gooch. They pry a piece of metal away and pull him out into the open. The other soldiers find the body of Aamot out in a field.

As one of the bodies is put into a body bag, another soldier leans over and touches the bag and says: "God bless you, brother."

Meanwhile, some soldiers are in a ditch and pointing their weapons toward a mud hut in the distance, about 500 yards away. Rounds of ammunition inside the burning Stryker are basically cooking — popping off every few minutes.

Other soldiers are collecting pieces of the Stryker. A transmission sitting in the dirt road was blown about 50 yards away from the blast site.

More than an hour passes. The firefight is over. The soldiers move quietly through the fields, carefully gathering remnants: another piece of the engine, a helmet, a single combat boot. It will be dark soon, and they will have to return tomorrow to finish the job.

Sunset, A Flight And A Prayer

As the sun begins to set, Burrow says it is time for the "angel flight" for the two men killed in action. "Angel flight" is the term for the helicopter that carries away the dead — the first step that will bring these men back to their families. The helicopter lifts off with the bodies of the two soldiers from the Stryker brigade.

Later that night, back at their base on a hill just above the road where the Stryker was hit, the battalion's chaplain, Gary Lewis, gathers soldiers from Charlie Company. He heaves a sigh and begins: "All right, let's pray for our brothers now."

The soldiers huddle together in twos and threes, sharing a prayer written on slips of white paper. Their faces are illuminated in a circle of flashlights.

"We just saw them today, having fun with them, with the puppies and that. Now we have to let them go. God the Father," the chaplain continues with his prayer.

In the morning, many of the soldiers will rise before dawn and make their way down the mountain to recover the Stryker, which continues to burn.