Accessibility links
'Hallowed Ground': A Final Resting Place At Arlington Thousands of people will visit Arlington National Cemetery on Veteran's Day — just a snapshot of the four million visitors who pass through America's revered burial ground each year. Author Robert M. Poole discusses his new book, On Hallowed Ground, which traces the history of the nation's most celebrated military cemetery. 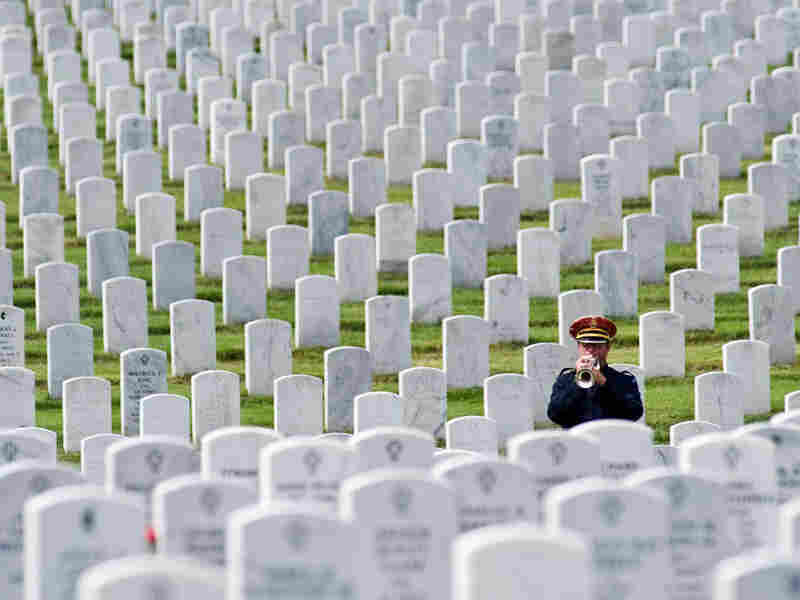 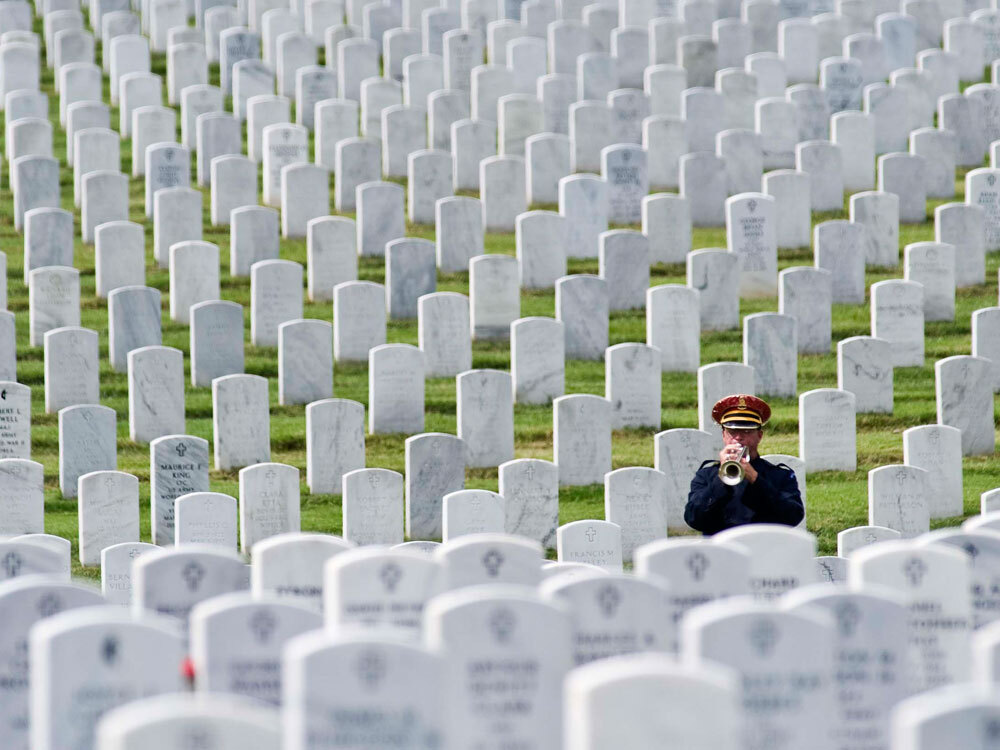 A bugler plays taps during burial services at Arlington National Cemetery in September 2009.

Thousands of people will visit Arlington National Cemetery on Veteran's Day — just a snapshot of the four million visitors who pass through America's revered burial ground each year. Author Robert M. Poole discusses his new book, On Hallowed Ground, which traces the history of the nation's most celebrated military cemetery.

"For many visitors," Poole writes, "a pilgrimage to Arlington is a devotional act — to seek out a buried relative, to pay respects to a treasured friend, to leave a promised beer or cigarette at the tomb of an Army buddy, to brush off a wife's grave and bring her up to date on the latest headlines. ... Few images linger in the national imagination as vividly as this hallowed ground, with its ghostly white tombstones, its deep green turf, its gnarled trees alive with songbirds and cicadas." 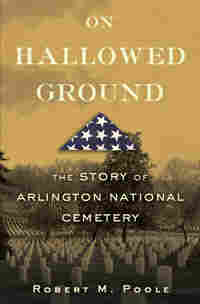 It was a beautiful day for a funeral. The last of the season's cherry blossoms drifted on a cool breeze, which carried the scent of freshly cut grass and wet stone over Arlington National Cemetery. Somewhere in the distance, the early morning mowing subsided, soon to be overtaken by the all-day crack of rifles, the rattle of horse-drawn caissons, and the mournful sound of taps floating among the tombstones.

Along Eisenhower Drive, as far as the eye could see, the grave markers formed into bone-white brigades, climbed from the flats of the Potomac River and scattered over the green Virginia hills in perfect order. They reached Arlington's highest point, where they encircled an old cream-colored mansion with thick columns and commanding views of the cemetery, the river, and the city beyond. The mansion's flag, just lowered to half-staff, signaled that it was time to start another day of funerals, which would add more than twenty new conscripts to Arlington's army of the dead, now more than 300,000 strong.

This day at Arlington--May 10, 2005--would be much like any other, with funerals taking place from morning until evening. Most of the ceremonies would be small affairs honoring the aging veterans of World War II and Vietnam. Other burials would be for young combatants returning from Afghanistan or Iraq, now headed for Section 60 of the cemetery, where their numbers had grown in recent years. Every funeral, run by specialty units from the uniformed services, was made memorable by the solemn ritual and the attention to detail that crisply pressed young soldiers, sailors, marines, airmen, or coastguardsmen brought to the assignment--carrying caskets, firing salutes, slow-marching in formation, driving caissons, folding flags, and offering comfort to friends and family around the grave.

No other nation goes to the effort the United States does to recover and pay tribute to its war dead, a military tradition older than ancient Athens. There, in 431 B.C., selected warriors were returned from the Peloponnesian battlefield with great ceremony, each tribe represented by a dead fighter borne home in a cypress coffin, with one empty bier representing all of the missing, "that is, for those whose bodies could not be recovered," wrote Thucydides. "The bones are laid in the public burial place, which is in the most beautiful quarter outside the city walls. Here the Athenians always bury those who have fallen in war."

The historian might have been describing Arlington. Since the time of Thucydides, societies have developed countless ways of honoring their war dead--by building monuments to those they could not recover, by elevating one unknown warrior to stand for all who sacrificed, by designating holidays for decorating graves with flowers, by establishing national cemeteries on foreign soil to recognize those who died far from home.

Thousands who sleep at Arlington today were brought there by the Civil War, a national trauma so unexpected and so extensive that, five years after Appomattox, recovery teams were still combing old battlefields around Washington to find, identify, and reinter thousands of casualties from both sides. Learning from the mistakes of that war, the United States created a national cemetery system, with Arlington at its heart, and slowly developed expertise in treating its war dead with exquisite care. That tradition continues, as the United States dispatches specialty teams around the world to recover its dead from active theaters of conflict, as well as those from earlier wars.

It was such an effort that finally brought the members of Breaker Patrol, 3rd Reconnaissance Battalion, 3rd Marine Division, to Arlington for a long-delayed homecoming on May 10, 2005--exactly thirty eight years after they disappeared in Vietnam: They were Navy Petty Officer 3rd Class Malcolm T. Miller, Marine 2nd Lt. Heinz Ahlmeyer Jr., Marine Sgt. James N. Tycz, and Marine Lance Cpl. Samuel A. Sharp Jr. All had died in a fierce fight for the high ground near Khe Sanh on May 10, 1967. While their wounded comrades were evacuated by helicopter, it was too late for Miller, Ahlmeyer, Tycz, and Sharp--left behind but not forgotten. Years after the war ended, forensic teams returned to the battlefield in 2002 and 2003 and recovered thirty one bone fragments, some teeth, and enough supporting evidence to make positive identifications of the four men. Corporal Sharp was the first to reach home, where he was buried in his native California a few days before the Arlington ceremony. He would be remembered at Arlington, where four caskets stood ready for burial in Section 60--one for Miller, one for Ahlmeyer, one for Tycz, and one for unidentifiable remains representing all of the dead from Breaker Patrol.

The fourth casket containing commingled bones was on its way down to Section 60 from the chapel at Fort Myer. You could gauge its progress by the rattle of drums drawing closer, setting the pace for a slow parade of 200 mourners, a Marine rifle platoon in dress blues and white trousers, a Marine band in gold braid and scarlet, and, bringing up the rear, a squadron of Rolling Thunder--Vietnam veterans on Harleys. This mismatched procession streamed down the hills in brilliant sunlight, turned left on Marshall Drive, and came to a halt on Bradley Drive, where the earth was laid open to make four new graves.

Six burly marines from the burial detail drew the fourth casket from a silver hearse, marched it across the grass, and stopped by the last grave. The Marine Band struck up the Navy Hymn. The body bearers hoisted the last casket shoulder high until the song was done, then eased it onto a catafalque, lifted away its flag, pulled the edges tight, and held it there as a Navy chaplain began to murmur the familiar words of comfort, but these were snatched away by the sounds of life intruding from all around the cemetery, in the drone of commuter traffic just outside the stone walls, in the whine of jets straining up from Reagan National Airport, in the thump of helicopters lumbering to and from the Pentagon. No matter how solemn the rituals at Arlington, life continued asserting itself from outside. And even in the cemetery, the living formed a link with all of the dead who had gone before--by speaking their names, by recounting their acts of duty and valor, by suspending the other imperatives of life for a few minutes of ritual and reflection. These acts convey a sort of immortality upon the dead, who continue to live as long as they are remembered.

Out among the tombstones, the long journey of Breaker Patrol was drawing to its conclusion. A firing party snapped off a three-gun volley, a lone bugler stepped forward to sound taps, and the honor guard began folding the last flag, pulling the fabric taut, creasing it, gathering it, and passing it down the line until it formed a tight blue triangle. With a sharp salute, the flag passed to a gunnery sergeant, who cradled it like a baby, marched it across the turf, and presented it to a chaplain. The chaplain, in turn, passed it to a retired Marine commandant acting as next of kin for all of those in Breaker Patrol.

Last of all, the motorcycle vets padded onto the grass and knelt, one by one, at each of the caskets to retire their MIA bracelets. Dressed in faded jeans and camouflage, the bikers looked incongruous among the spit-and-polish crowd that day, but when they stepped up to a grave, stood straight, and snapped off a salute, you could see that they had been soldiers too, and some of them were crying.

From On Hallowed Ground: The Story of Arlington Cemetery by Robert M. Poole, excerpted by permission of the publisher, Walker & Company. 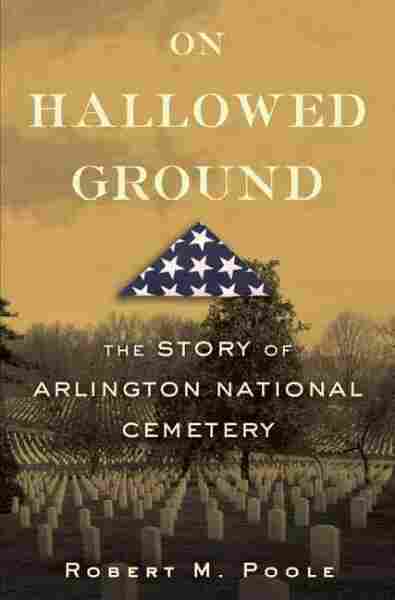 The Story of Arlington National Cemetery