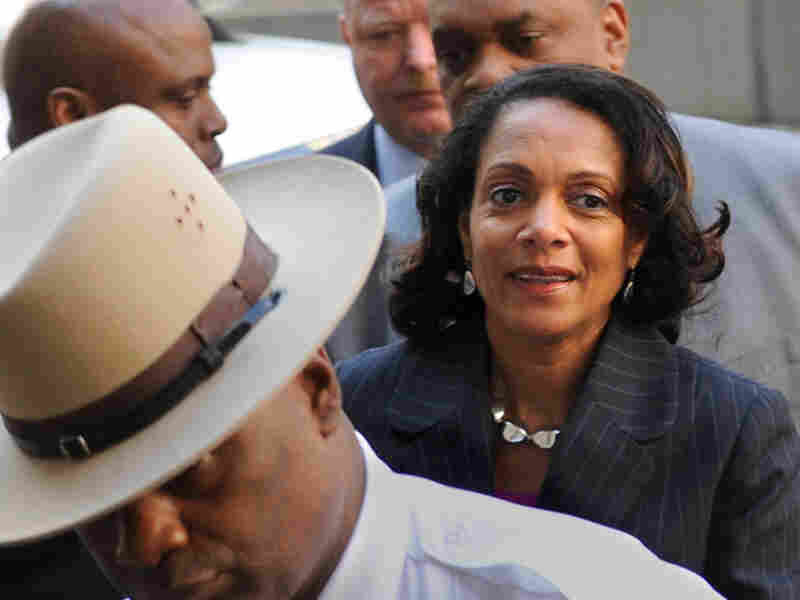 Baltimore Mayor Sheila Dixon arrives at court for the first day of jury selection on Monday. She's accused of personally using gift cards given by Baltimore developers that were meant for the poor. Jed Kirschbaum/Baltimore Sun/Washington Examiner/AP hide caption 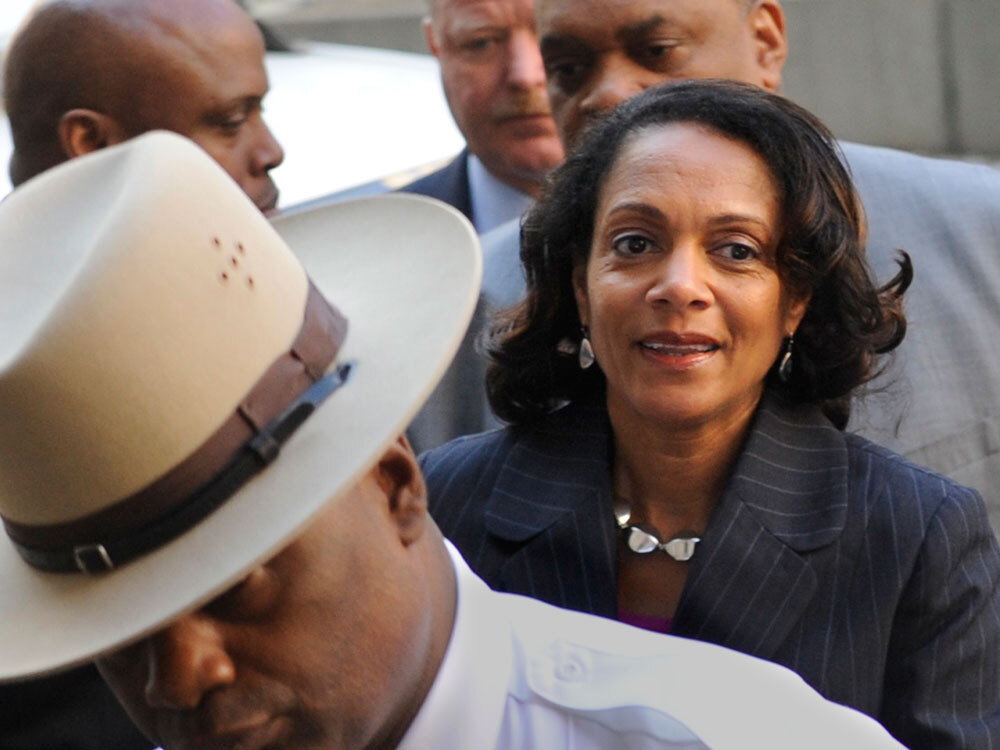 Baltimore Mayor Sheila Dixon arrives at court for the first day of jury selection on Monday. She's accused of personally using gift cards given by Baltimore developers that were meant for the poor.

Opening statements are slated to begin Thursday in the first of two corruption trials for Baltimore Mayor Sheila Dixon, the first African-American woman to lead the city.

Across the city of Baltimore, the corruption trial of Dixon has residents like Stephanie Williams talking.

"I don't think anyone in the city hasn't heard about it," Williams said.

Public opinion here hasn't focused on the mayor's race or gender, but whether she can run the city while she stands trial. That said, residents like John Cheatham, who's African-American, sense racial overtones.

Dixon, 55, took office in 2007. She faces seven criminal counts, including felony theft, misappropriation of funds and misconduct in office.

The charges date back to the mayor's former role as president of Baltimore's City Council. Prosecutors allege that Dixon used gift cards intended for the needy at Christmas to purchase clothing and electronics for herself and others.

The cards were donated by developers engaged in multimillion-dollar deals with the city. One of them — Ronald Lipscomb — is a former boyfriend of Dixon. He recently reached a plea deal in a separate bribery case, and has agreed to testify against the mayor.

So far, Dixon and her defense team have said little during these early trial proceedings. But the mayor has professed her innocence at various press events over the past few months.

"I would love to have a timely resolution of this," Dixon said. "Because this is clouding a lot of good work that's going on. I've been asking for this now for the last several years."

Dixon also faces a second trial on perjury charges next year. In that case, she's accused of failing to report lavish trips and designer shoes and clothing from her ex-boyfriend Lipscomb, the developer. Prosecutors say the law required Dixon to report the gifts, though her lawyers have cited a loophole. She's been unapologetic about the shopping sprees.

A Career At Stake

If convicted of the felony charges, Dixon would have to step down and could face jail time. Matthew Crenson, a political science professor at Johns Hopkins University, says that the mayor's entire political career is at stake.

"It's true that the kinds of crimes that've been alleged here are fairly trivial by comparison with other political scandals," Crenson said. "This is no Teapot Dome, no Watergate; it is not even Rod Blagojevich. But they're important because they reflect on the mayor's integrity."

Stealing gift cards? Come on! She's got better things to do, like run the city.

Dixon is a Democrat, who says the case is politically motivated by a Republican-appointed prosecutor. That office has spent nearly three years and millions of taxpayer dollars investigating City Hall.

"Stealing gift cards? Come on!" said Williams. "She's got better things to do, like run the city, make sure that our trash is picked up, make sure that the police are fully staffed [and] that everybody's working. I mean, there are more important things to do. Potholes, in my opinion, hold a higher priority than wasting all this money on this trial."

But resident Doug Meyers counters that the case does have merit. The charges don't surprise him.

"It just seemed like the good old boy system in Baltimore [is] once again hooking people up," Meyers said. "It doesn't seem any different from past mayoral administrations over the last billion years."

Dixon's trial is expected to last about three weeks. The jury is made up of three men and nine women — most of them African-American. That composition is something the defense hopes will help the city's first female mayor protect both her job — and her freedom.