Accessibility links
Battle over Method Thwarts Bottle Recycling Less than one-quarter of the billions of plastic bottles Americans purchase every year are recycled. But bottlers, environmental activists and others disagree on the best way to increase that amount. 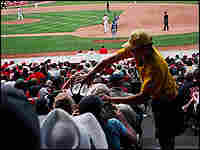 A vendor sells bottled water to fans at Boston's Fenway Park. Despite all the beverages consumed in the stadium, there are no recycling containers in sight. Nancy Cohen for NPR hide caption 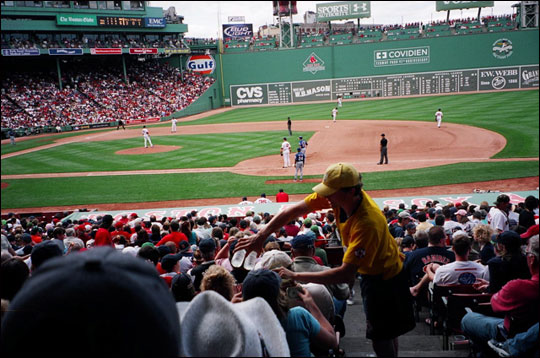 A vendor sells bottled water to fans at Boston's Fenway Park. Despite all the beverages consumed in the stadium, there are no recycling containers in sight. 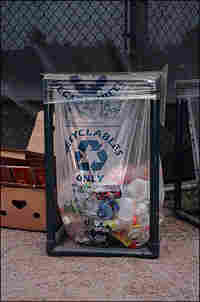 Containers like this one at a Mansfield, Conn., ball field have increased recycling of bottles and cans there by about 60 percent. Nancy Cohen for NPR hide caption 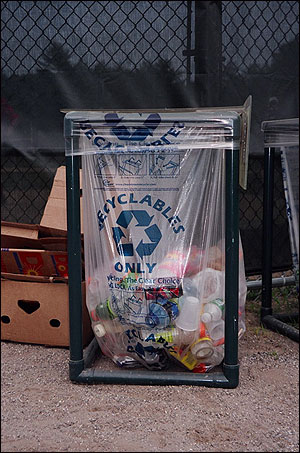 Containers like this one at a Mansfield, Conn., ball field have increased recycling of bottles and cans there by about 60 percent.

Companies that reclaim the plastic resin from empty beverage bottles say they can't get enough of the stuff. However, fewer than one-quarter of the billions of plastic bottles Americans purchase every year are recycled.

Some of the worst places for recycling are large public events. For instance, baseball games at Boston's Fenway Park draw more than 36,000 fans, but there are no recycling containers in sight.

A Little League park in Mansfield, Conn., may have a better game plan — a transparent receptacle with a recycling symbol stamped on the outside. The containers have increased the recycling of bottles and cans in town parks by about 60 percent.

"It was like 'Yes! This is the answer to public events!'" says Virginia Walton, Mansfield's recycling coordinator.

Walton says the key to getting people to recycle more is to give them a way to do it — and make it a no-brainer.

'Bottomless' Demand for Bottles to Recycle

Public recycling bins of any kind are rare in the United States, but the industry that recycles the bottles' plastic resin, known as PET, is hungry for more to make fabric, carpets and new bottles, says Michael Schedler of the National Association for PET Container Resources.

"The demand is almost bottomless at this point," Schedler says. "There's so much new demand coming on and existing demand can't be met."

Across the country, recycling programs for plastic bottles are a hodgepodge — each state and town does its own thing. Some recycle plastic at the curb; others at drop-off centers. Some don't recycle at all.

"People realize in bottle-bill states that throwing out a can with a deposit on it is, in effect, throwing out a dime or a nickel," Hershkowitz says.

The 11 states with bottle bills account for more than 60 percent of the PET plastic recycled in the United States. But many grocers are against deposits.

"It's somewhat dirty, it's inconvenient and it actually costs us money," says Ken Capano, who owns two ShopRite stores in Connecticut.

Capano says the deposit law in his state places too much of the burden of recycling on grocers, who have to provide space and machines to take the bottles back. It costs each of his stores about $20,000 a year, he says.

"The key is a comprehensive program that draws in not just bottles and cans but milk jugs and newspapers and magazines and detergent bottles and all the things that make up the waste in our communities," Neely says.

In California, the deposit program funds curbside recycling. Jim Hill of the California Department of Conservation says the state uses the money from bottles and cans that aren't returned. That adds up to $250 million a year.

"Curbside systems, drop-off systems all working together, I think, is the best approach to get the best bang for your buck," Hill says.

California also addresses some of the grocers' concerns. Instead of supermarkets taking back the bottles, independent redemption centers do. The state also puts a deposit on all beverage containers except milk and wine.

Some Say Laws Should Target More Than Bottles

Kim Jeffery, president and CEO of Nestle Waters North America, says he's not against container deposits, but he says beverages should not be the only containers targeted.

"Everybody that sells a plastic container that's recyclable should have some deposit on it if we're going to do this thing the right way," Jeffery says.

And he means everybody.

Hershkowitz says that if Americans don't recycle more plastic, other problems will get worse.

"Petroleum-based plastics emit enormous amounts of hazardous emissions and greenhouse gases during the acquisition of the petroleum and the transformation of that petroleum into a plastic product," he says.

Hershkowitz says recycling avoids that pollution, but making recycling work isn't a national priority. However, the growing market demand for empties may trigger a new commitment.