Accessibility links
Soldiers Pick Up Wreckage After Afghanistan Bombing The day after a massive bomb tore apart an armored vehicle, killing two soldiers of the Army's 5th Stryker Brigade Combat Team, the troops head out to recover the still-smoldering vehicle in Afghanistan's Arghandab Valley. The soldiers struggle to stay focused on their mission as they lose friends on the battlefield.

It's still pitch black on Nov. 6 when the Stryker armored vehicles roll out of their hilltop compound in Afghanistan's Arghandab Valley, a Taliban stronghold outside the southern city of Kandahar. The soldiers of the Army's 5th Stryker Brigade Combat Team out of Fort Lewis, Wash., know the Taliban is out there, watching, so they are using the cover of darkness to begin this recovery mission.

The day before, a massive bomb tore apart an armored vehicle, killing two soldiers of the 2nd Platoon. Now, the troops are heading out of their outpost to recover their still-smoldering Stryker.

Pvt. Dylan Higden bounces along inside the tight crew compartment of his Stryker. Along the way, he talks about his unit -- and the attacks it has endured -- in the first three months of its yearlong deployment.

Just over a week earlier, on Oct. 27, he says, another huge bomb had hit their unit in a dry riverbed less than a mile from the latest attack. 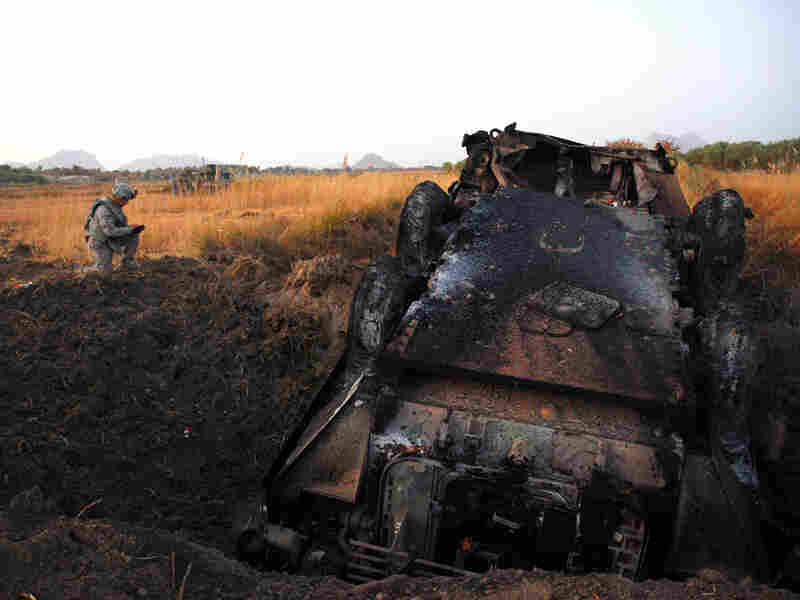 Battalion Chaplain Gary Lewis says a prayer over the Stryker where Spc. Aaron Aamot and Spc. Gary Gooch died the previous day. The wheels were still burning, and the soldiers later had a difficult time pulling the massive vehicle out of the blast crater. Graham Smith/NPR hide caption 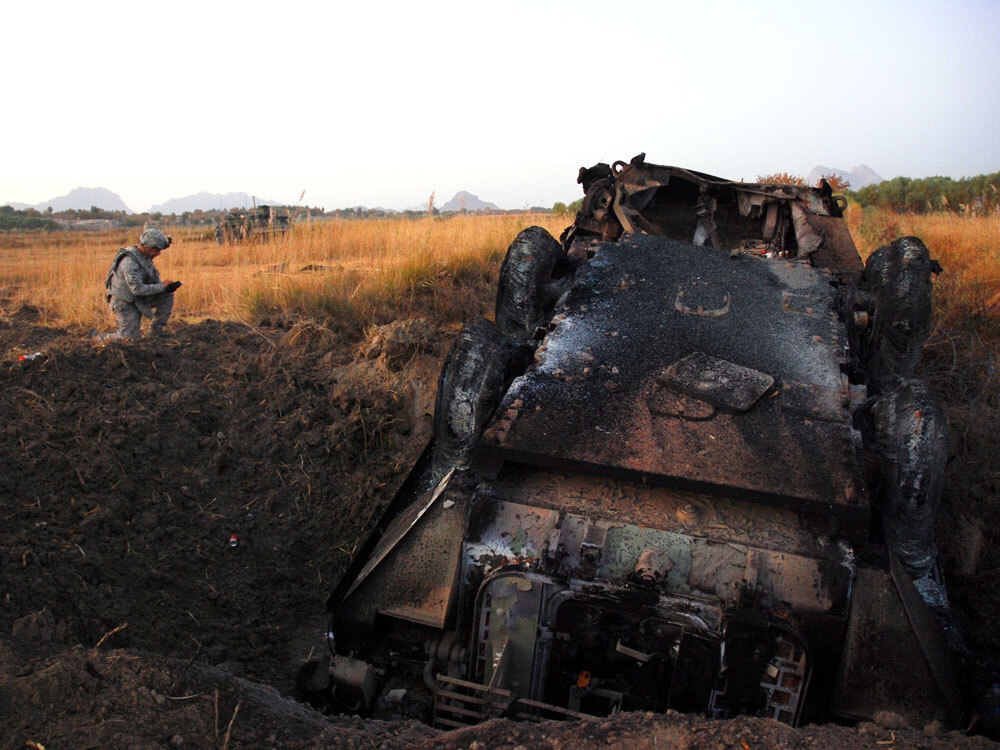 Battalion Chaplain Gary Lewis says a prayer over the Stryker where Spc. Aaron Aamot and Spc. Gary Gooch died the previous day. The wheels were still burning, and the soldiers later had a difficult time pulling the massive vehicle out of the blast crater.

Higden, a 21-year-old soldier from North Carolina, says military service is a family tradition. But with the repeated bomb attacks, he regrets even joining the Army. He just wants to go home.

"I think you just take all of us out and let them run their own country," he says. "That's my opinion."

It's an opinion shared by many of these soldiers.

The night before the recovery mission, Pvt. Demetri Handerhan poked his head through the hatch of his vehicle, keeping watch and gazing at the burning Stryker.

Read More About
The Bombing

A Familiar Enemy For Platoon In Afghanistan Nov. 11, 2009

Already, the battalion has lost more than 20 men.

"It's scary. It's really scary," Handerhan says. "I get scared all the time just driving the Stryker. I never know when I'm going to get blown up, whether -- am I going to survive or the people inside going to survive?"

'I Hate Being A Mine Detector'

Now, the task comes down to this: How do you remove a 20-ton vehicle on its back from inside a muddy crater?

The rubber of the massive tires has burned away, leaving only the steel belts, still glowing orange.

"I don't know how we're going to get it out. This may be beyond my level of expertise," says 1st Sgt. Charles Burrow. Burrow is tired, having spent the night in the field.

Standing nearby, watching, is Sgt. Josh Stokes. He was right behind the Stryker that got hit. He watched it fly into the air and then he jumped into the crater to pull out his wounded comrades. He has fought in Iraq and Afghanistan.

"I'm a soldier and I know how to fight -- done it before, been in plenty of situations where I needed to fight -- but I hate being a mine detector," he says.

He questions whether Strykers are right for Afghanistan. They did well in the cities of Iraq, on well-paved roads. But in Afghanistan, they often get stuck in loose soil or muddy fields.

"In my opinion, Strykers don't need to be in this country. You look from here all the way up to Bagram -- if you drive up Route 1, you see nothing but littered Russian vehicles from when the Russians were here," he says. "This has to be air power."

The problem is there aren't enough helicopters -- or crews -- to go around, which forces soldiers to drive.

While the Strykers are more mobile, without the heavier armor of a tank, they are more vulnerable to the massive bombs buried under the roads here.

Military officials say the security situation can be improved only if they can win over the population, or at least get them to tell the Americans where the bombs are.

That's the view of the battalion commander, Lt. Col. Jonathan Neumann. It's his job to make sure his troops stay focused on the mission -- protecting the Afghan people here in the lush Arghandab Valley.

He admits it is difficult right now.

"Just in the last week, C Company's really taken a beating here," Neumann says. The second platoon of C Company has suffered the most: With 11 killed and a handful seriously wounded, about 30 percent of the 2nd Platoon is gone.

"That platoon's done for. ... It doesn't even exist really anymore," he says. "I mean, just so many guys. ... We moved some folks around, but we've got to kind of absolutely scramble those guys."

And that's one more thing making it hard for these soldiers to keep focused on their mission.

"The challenge is to keep demonstrating or showing them the successes we're having," he says. "All caches in the world and those kinds of things don't make up for losing our brothers on the battlefield. But you've got to be able to show them that we are accomplishing our mission as assigned to us and that we are making things better a day at a time. On a day like today, it's tough, and you know they're wavering and questioning that."

Yet the soldiers out in this field say they get it. They know protecting the Afghan people is the way to fight the insurgency. They also know it's tough.

Sanders watches as two armored tow trucks finally pull the Stryker from the crater. He's amazed these soldiers don't go on a rampage after something like this, when local farmers must have known a massive bomb had been planted.

"I can't cite another army in history that is more disciplined than the American Army now," Sanders says. "The stuff we've been through, this platoon. You look back, it would just be retribution. ... It would be wholesale slaughter."

Now on his third tour here, Sanders says he wants to help Afghans, but keeping that feeling of compassion alive is a struggle.

"It's really hard. It's really hard. I mean, I just gave a eulogy last week for one of my guys, you know, but I know the way not to win this war is to kill everybody," Sanders says. "Didn't Vietnam prove that? You know what I mean, like, it's not just genocide, it's inch by inch ... but it's s - - - like this that makes it very, very, very, very difficult to keep that line of thought."

After several hours, the destroyed Stryker is being dragged down the dirt road, carving a wide gash. It will be placed on a flatbed truck and make its way to Kandahar Airfield, a half-hour down the highway.

Stokes and others from his squad are asked to hop aboard a Stryker and roll back to the district center. He decides against it.

"I'd rather walk, I'll be honest with you. When we leave this field, I'm going to walk," he says.

Stokes and several other soldiers from 2nd Platoon head across the open field, keeping a safe distance from the road -- and their vehicles.