Accessibility links
NASA Unveils Plan To Unstick A Mars Rover The space agency announced plans for freeing the rover Spirit, which has been stuck in a Martian sand trap since April. Spirit has six wheels, though one, being inspected here by the rover's robotic arm, stopped working in 2006. NASA engineers will begin transmitting commands to the robot's five working wheels on Monday, but escape efforts could last into early next year.

NASA has announced a plan to extricate its rover Spirit, which has been stuck in a Martian sand trap since April.

The space agency will begin transmitting commands to the exploration robot on Monday. Based on tests conducted on Earth this spring that simulated conditions at the Martian site, researchers do not expect the effort to be quick or easy. 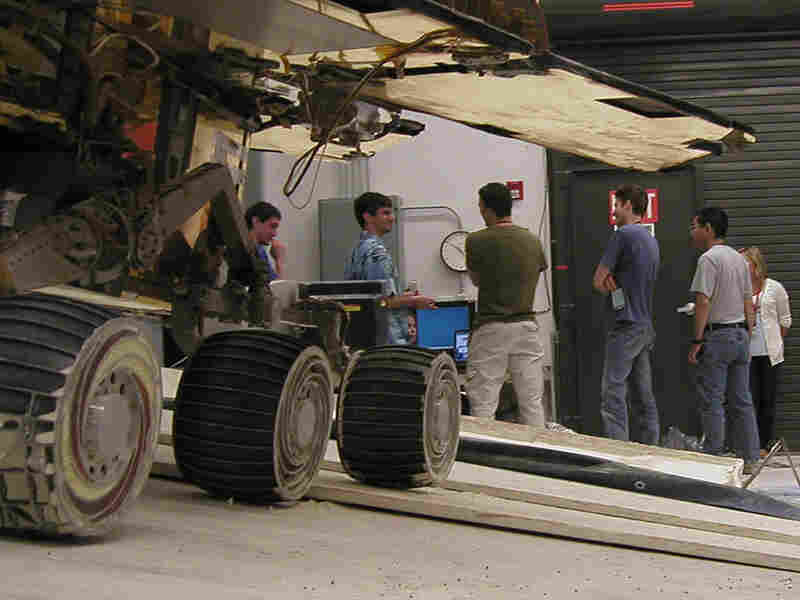 A team at NASA tests possible maneuvers for the Mars rover Spirit to use to escape the soft soil it has been stuck in since April. NASA/JPL-Caltech hide caption 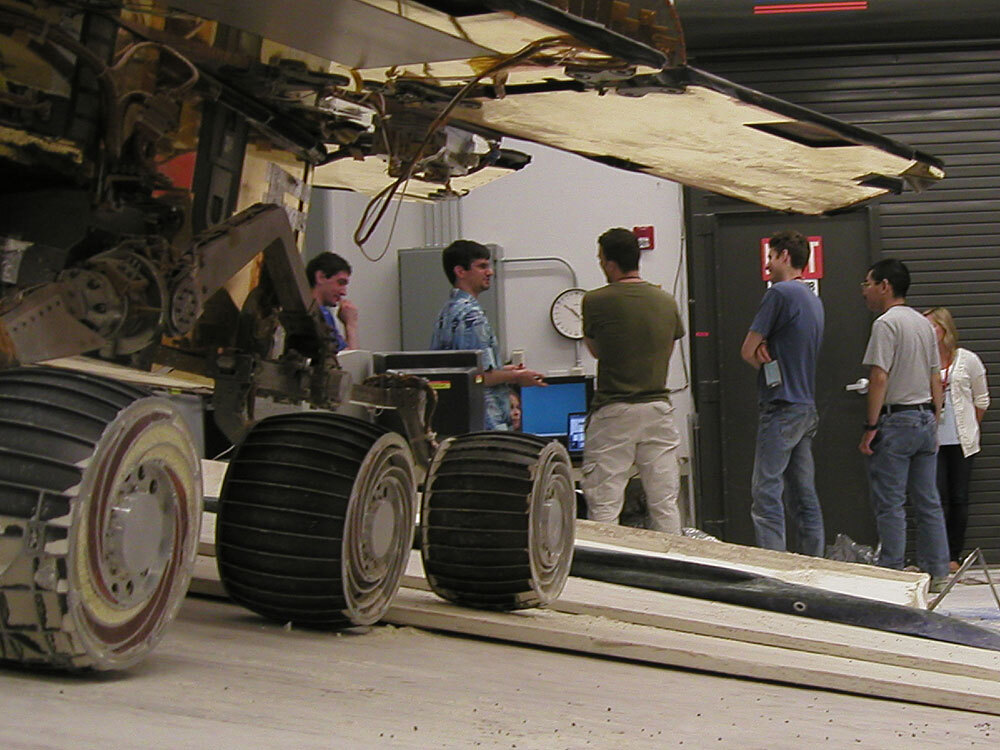 A team at NASA tests possible maneuvers for the Mars rover Spirit to use to escape the soft soil it has been stuck in since April.

"This is going to be a lengthy process, and there's a high probability attempts to free Spirit will not be successful," said Doug McCuistion, director of the Mars Exploration Program.

Spirit has six wheels, though one stopped working in 2006. The first commands will tell the rover to rotate its five working wheels forward approximately six turns. NASA engineers expect that severe wheel slippage is likely, with barely perceptible forward progress in this initial attempt.

When Spirit returns data the next day, engineers will look at the results, and use that information to develop and send commands for a second attempt. NASA plans to continue escape efforts, if necessary, until early 2010.

"Mobility on Mars is challenging, and whatever the outcome, lessons from the work to free Spirit will enhance our knowledge about how to analyze Martian terrain and drive future Mars rovers," McCuistion said. "Spirit has provided outstanding scientific discoveries and shown us astounding vistas during its long life on Mars, which is more than 22 times longer than its designed life."

The two Mars rovers, Spirit and Opportunity, have been at work on Mars since January 2004. The mission was originally designed to be only three months long.

Jim Bell of Cornell University is the scientists in charge of the panoramic cameras, or PanCams. These are the stereo cameras that have been sending back remarkable pictures.

"We never imagined, of course, that they will be doing this well. But the PanCams passed our quarter-million image mark," said Bell.

When asked whether the rover's technology was designed to last this long, or if it's just luck, Bell said: "I mean you can't really talk about overdesigning for something that you never built before. Sony can tell you exactly how long any of its TVs are going to last, because they've built millions of them. But with space vehicles, they're one-offs, they're one-shot deals."

Or this case two-shot deals, because there are two PanCams working on Mars: one on the rover Opportunity, and the other on Spirit.

And it's Spirit that's gone and got itself into trouble.

Stuck In A Sand Trap

Last April, as it was driving south, it broke through a thin layer of crusty soil. What was underneath was extremely fine-grain soil, and Spirit's wheels quickly got stuck.

"We haven't found a clear solution how to get Spirit out of its predicament," said John Callas, the rover project manager. He said the situation is challenging. One of the six rover wheels stopped working three years ago, so moving has been tough for a while.

Now another wheel may be stuck. And the rover's underbelly, what Callas calls "the belly pan," is perilously close to some rocks beneath the rover.

And perhaps worst of all, every time they've tried to move the rover, it's sunk a little deeper. Sinking much farther would be disastrous.

So after months of working on the problem, Callas said on Monday, the team will send the rover instructions to try moving out of the sand the way it came in. NASA managers sound hopeful — but not optimistic — that this will work

On the other side of Mars, rover Opportunity is still rolling along. It's on a 12-mile trek across a sandy plain to a large crater, called Endeavor, that scientists want to explore.

Bell said Opportunity is still making cool discoveries. Just the other day it came across a large rock.

"The hope is that this is a piece of Mars that comes from somewhere else," Bell said. "It was thrown out by a big impact crater, and it just happens to have landed in our path. And this is kind of a free way to sample more of Mars than we have been sampling where we are."

One more feather in the rovers' already well-decorated caps.