Accessibility links
Ramen Noodles Serve Up A Bowl Of Nostalgia Last week, NPR asked listeners to send in ramen noodle stories. And they flooded in. Those cheap little packages of instant noodles with the silver foil flavor packets served up a big bowl of nostalgia. 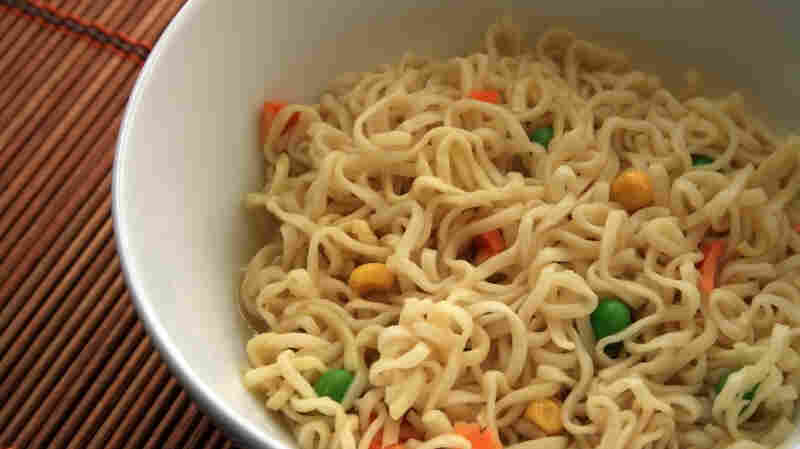 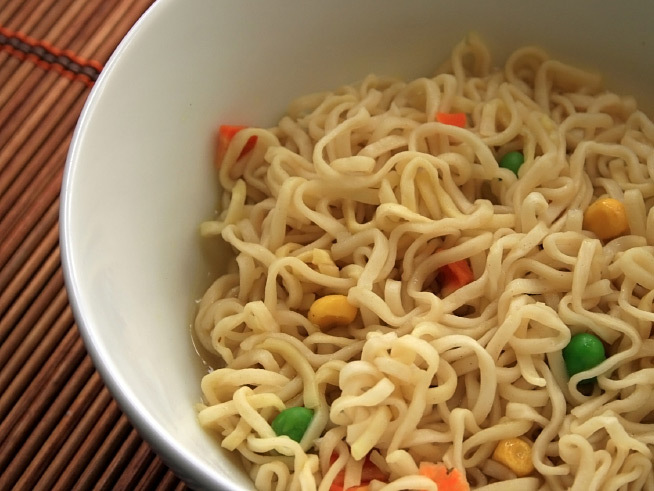 Last week, NPR asked listeners to send in ramen noodle stories. And the noodle stories flooded in — those cheap little packages of instant noodles with the silver foil flavor packets served up a big bowl of nostalgia. Here are a few of them.

I was visiting an out-of-town friend and he began boiling up a pot of ramen on the stove while we were catching up. He then went on to plug in the waffle maker which I assumed was for something unrelated. I was taken completely by surprise when he mixed the cooked ramen noodles with sesame oil and dropped them on the heated waffle iron. They sizzled for a while and when he deemed they were done he took the "waffle," cut it in half, plated the halves and poured maple syrup and sesame seeds on each piece, offering me one. The most surprising part ... it was actually kind of good. Much like a pan-fried noodle. But I think it would have gone better under a nice stir-fry. It occurs to me I now have a waffle maker of my own. Perhaps I'll give it a try.

While teaching middle school in the mid '80s, I had a definitely memorable experience with ramen. For some reason, at least in our school, ramen became a popular snack for sixth-graders to bring to school. I think instant ramen hadn't been around too long and the kids loved the idea of eating it fresh out of the bag, crunchy and uncooked. They would also open the seasoning packet and pour some of that into their mouths along with the crunchy ramen.

Well, it drove the teachers crazy! Here are the reasons: First, they were eating it dry so they would be thirsty for hours afterward as the noodles swelled in their stomachs; and second — and maybe the worst thing about it — they ended up with terribly bad breath from eating the seasoning packets without water. We teachers, along with other students, got the brunt of the bad breath. So even though there were far worse snacks nutritionally than noodles, we finally had to ban ramen as a snack! Who would think it would come to that!

When my husband was in college, he ate a lot of ramen. He wanted to stretch the meal, so he would add things to the ramen such as frozen veggies or chili. The chili/ramen dish became a staple of his diet until the chili started giving him excessive gas. To keep peace with his roommates he switched to Dinty Moore Beef Stew, and Stoodles was born.

Stoodles in our house is an event. We empty the stew into a bowl and heat it in the microwave. After crushing the ramen in the bag, we open it, throw out the flavor packet and put the crushed noodles into the now empty stew can. We pour boiling water over the noodles and let them cook while the stew heats up. Then the noodles are drained and stirred into the stew, becoming Stoodles.

This is my family's favorite meal. When I ask what they want for their birthday meal this is what they ask for. It's a special treat because I don't buy the Dinty Moore Stew very often and I would like to keep it that way because it's so darn easy.

My own favorite experience with ramen began when my teenage son, out fishing with a group of family and friends near our cabin, called to ask me if he could bring home a trout he caught but unintentionally killed at a nearby lake, which happened to be a catch-and-release-only lake. The all-teenage group on the other end of the phone clearly wanted to show off and eat their catch. I said sure, but I knew we had nothing in our meager stores at the time (no flour, no breadcrumbs, etc.) to use to prepare the fish. When they got home we decided to have some fun to see how creative we could be with what we had to prepare a batter. I pulled out a couple of packets of ramen (those that had not been nibbled on by the mice), opened one, and after fashioning a mortar and pestle with available utensils, began to grind the noodles into a flour, or I should say into a chunky flourlike compound. I had some bad beer so we added a little of that to make it pasty enough to stick on the fish, and oh yeah, the flavor packets (chicken flavor I believe), we of course had to throw that in too for the proper seasoning. We dipped the rainbow fillets in the homemade batter, grilled them, and they were delicious! Even the doubters I think were impressed. Ramen: the duct tape of fast food.

I love ramen burritos! I made them a lot when I was in college. My favorite flavor was chicken, but vegetable was good. I'd prepare the ramen like the package says, then mix in a little bit of garlic, sour cream and soy sauce, and wrap it all up in a warm flour tortilla. Initially those things were all random items from in my kitchen when I hadn't been to the grocery store in a while, but I found myself eating that concoction rather regularly for a while!

After listening to the piece about ramen noodles, I had to share my memories with you. I was a "starving" flight attendant in my youth, and a fellow flight attendant taught me how to make a tuna casserole with ramen noodles ... in flight. In the early days, there were no ovens on our aircraft and after a long (12-14 hours) day we often had no access to a hot meal. My friend, Melody Evans, showed me how to take ramen noodles, hot water, tuna and mayo packets and create a warm delicious meal. We could also add canned veggies. All the ingredients could easily be carried around for days, if not weeks, without spoiling. This recipe was a lifesaver for me and on more than one occasion I was the recipient of envious looks as I ate my green chili and corn tuna casserole huddled in the back galley!

I lived in Tokyo and can't describe how good the ramen there is and how much I miss it here, since the only restaurant that made it in Philly has closed. I like to make kimchi ramen. I buy fresh kimchi from the Korean supermarket and a product called kimchi moto or kimchi base (although it is not in fact used in making kimchi). I break an egg into the boiling water along with the noodles and add the kimchi base to the regular "Oriental" ramen flavor packet in the bowl. Place the fresh kimchi, a little pork or ham, and some scallions on top when it's done. It comes out pretty close to what I used to get in Japan.

It was gratifying to hear David Chang confirm for me that the pronunciation of the dish is "rahm-yen" as I learned it in Korea in 1967-68. At 50 won per package (about 7 cents back then) ramen was a staple. We could cook it in a canteen cup on the kerosene-fired space heater in the barracks or dispensary when it was way too cold near the Korean demilitarized zone to walk to the mess hall. Pop in an egg or a big spoonful of peanut butter from one's mess hall "procurements." Properly done, doctored ramen nearly always beat whatever mostly unidentifiable culinary delight was on the camp's lunch menu.

I don't think that I would've afforded to have made it through college if it weren't for ramen noodles. I would buy them in something like 24-packs, for about 10 cents per pack. As a soup, I would typically just add soy sauce. Another way of preparing them was to drain them and add Italian salad dressing. I have also used them dry and crushed them for Chinese chicken salad, but that was only after college when I could afford the rest of the ingredients of Chinese chicken salad, including chicken and mandarin oranges. But to this day (perhaps unfortunately), I cannot eat ramen. As a result of college, it was just too much ramen, sort of like how I can't drink tequila anymore.

My dad would cook ramen noodles for my brother and sister and me. We called the meal "roman numerals." My dad would mix the noodles with a can of mixed vegetable soup. We thought it was a delicacy.