Accessibility links
For Obama, Ceremonies Emphasize Weight Of War From his stop at Dover Air Force base to a visit to Walter Reed Army Medical Center to Wednesday's private visit to military grave sites, President Obama appears to feel the weight of war acutely as he considers U.S. options for Afghanistan. None are likely to be welcomed by the American public. 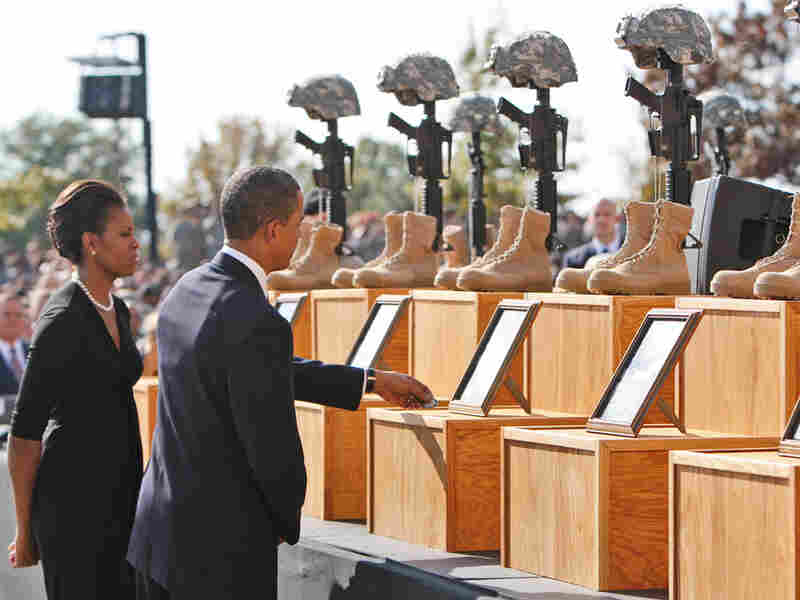 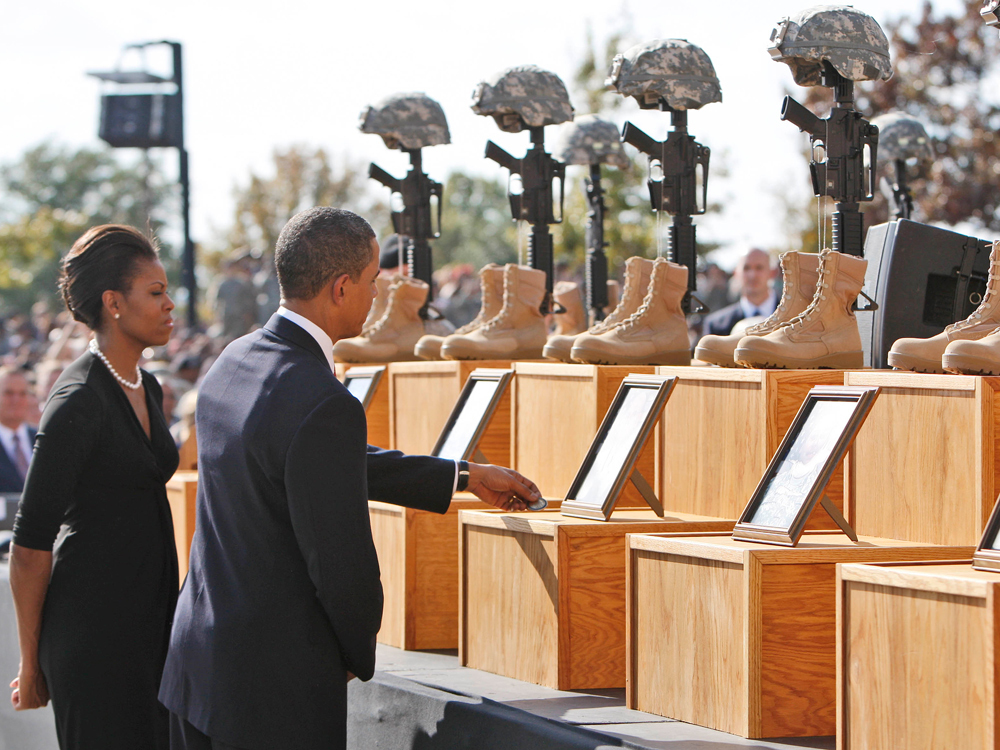 For months now, President Obama has been holding top-level White House meetings with advisers as he considers his options for U.S. troop levels and military posture in Afghanistan.

Aides say Obama has not reached a decision. But it's also clear that amid all of the talk of strategic options, the president is also weighing the human cost of war and its impact on soldiers and their families.

Every president says the same thing: that the hardest and most profound part of the job is sending Americans into combat. However his decisions play out in the grand scheme of things — militarily and geopolitically — they will cost American soldiers' lives.

"In this time of war, we gather here mindful that the generation serving today already deserves a place alongside previous generations for the courage they have shown and the sacrifices that they have made," Obama said.

The day at Arlington was overcast, the rain heavy at times. After his remarks, the president made an unannounced stop in a part of the cemetery where the headstones mark the graves of soldiers killed in Iraq and Afghanistan.

Obama and the first lady wandered in between the rows.They stopped to hold brief conversations with unsuspecting individuals and groups of people paying their respects to lost family members and friends buried there.

It was just the latest in a series of close-up encounters with the price of war that the president seems to have actively sought out in recent weeks.

Last month, the president made a middle-of-the-night trip to the tarmac in Dover, Del., where military planes bring the remains of U.S. soldiers killed in combat back to American soil. More recently, Obama visited wounded soldiers at the Walter Reed Army Medical Center. And just two days ago, he spoke in Texas at a memorial service for those killed in the shootings at Fort Hood.

Sen. Jack Reed is a Democrat from Rhode Island and a Vietnam veteran. Eighteen months ago, when President Obama was still in the Senate, the two men made a trip to Afghanistan together.

"He understands that the cost of war is not just in the budget but in the lives of so many American soldiers, sailors, Marines, airmen, their families," Reed says. "And any leader has to consider that. ... It's not just a question of pins on a map, and terminology and weaponry, etc. It's a human endeavor."

Presidential historian Robert Dallek says that just as the human cost is on display at Arlington, the historical stakes are, too. Dallek says there are lessons the president can take from mistakes in the way the U.S. handled the wars in Iraq and Vietnam, and Korea before that.

Dallek says what makes war decisions so daunting is that you can never know enough.That's what past presidents have learned.

"You're making your best judgment," Dallek says. "You're making your best guess. But some of these assumptions have been so wrong in the past, that it's got to make it all the more sobering for President Obama to make this judgment now, in light of the misjudgments that were made so repeatedly ... in the country's recent history."

Equally sobering: The thoughts the president is likely to have as he recalls the people he's met in recent weeks — at Dover and Arlington, at Walter Reed and at Fort Hood.