Accessibility links
Russian Convents Face Obstacles To Restoring Past Russia has seen an explosion in the number of Orthodox convents in the decades since the end of communist rule. There are now more than 240. Most of the renovated convents — many in remote areas — are based on their distant history and devotion to their particular icons. But for many reasons, reviving the past is far from easy. 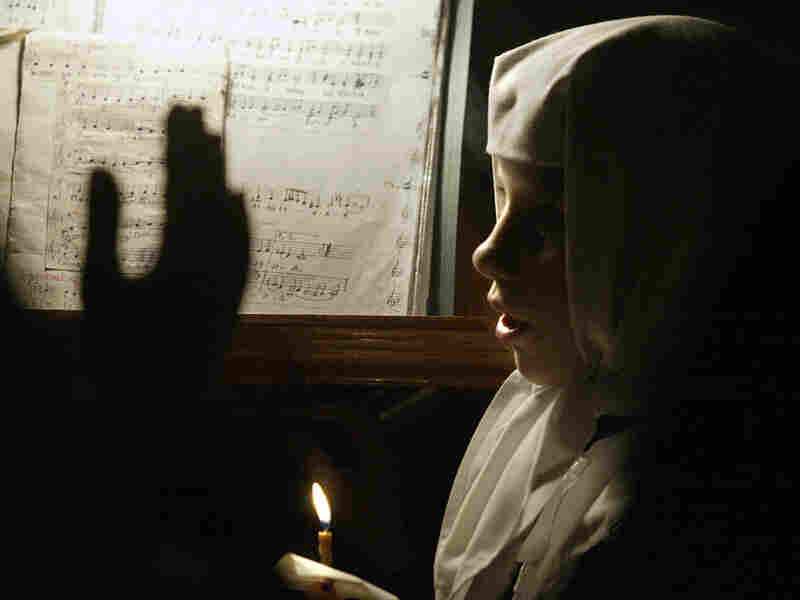 A young conventual sings during an Orthodox Easter celebration Mass at the St. Nicholas convent in the town of Maloyaroslavets, about 80 miles southwest of Moscow, in April 2004. Denis Sinyakov/AFP/Getty Images hide caption 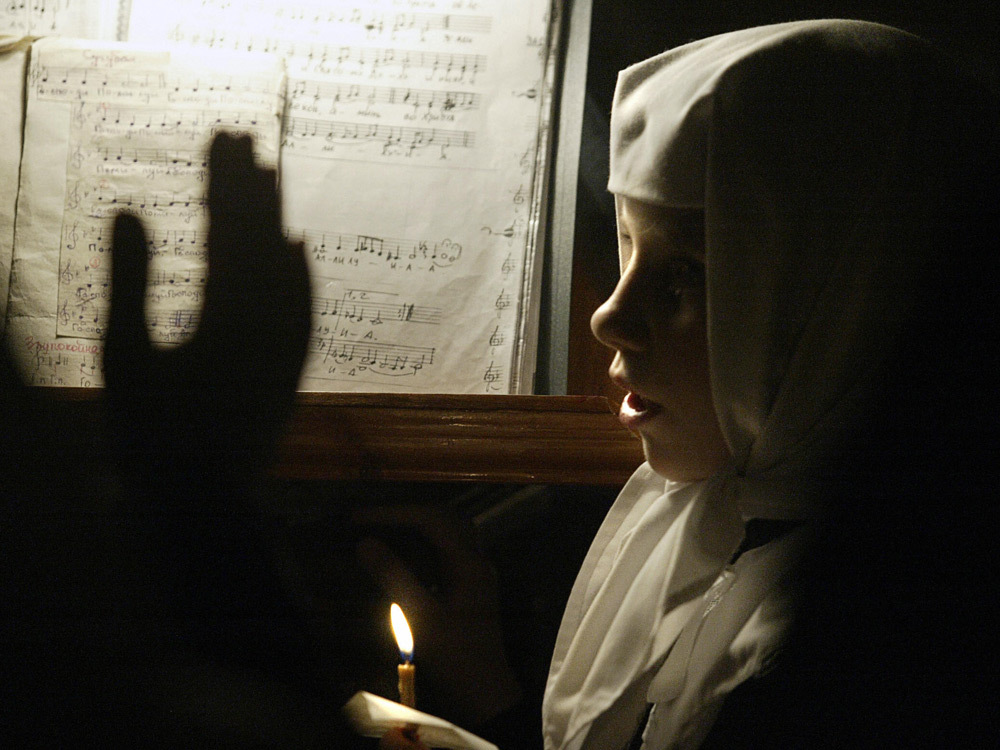 A young conventual sings during an Orthodox Easter celebration Mass at the St. Nicholas convent in the town of Maloyaroslavets, about 80 miles southwest of Moscow, in April 2004.

Russia has seen an explosion in the number of Orthodox convents over the past two decades.

After the 1917 revolution, all were closed. Some women continued to live as nuns in secret, but with the end of communist rule, convents had to start from scratch. There are now more than 240, outnumbering monasteries.

Most of the renovated convents — many in remote areas — are based on their distant history and devotion to their particular icons. But for many reasons, restoring the past is far from easy.

The restored convent in the provincial town of Serpukhov, a two-hour train ride from Moscow, is jammed on a Sunday morning. Founded in the 14th century, the convent became known for its miracle-working icon, which the nuns say has long helped those trying to stop drinking.

They believe it can now also help those battling drug addictions — a growing Russian affliction — and they welcome those seeking spiritual rehabilitation.

Mother Superior Aleksiya, 45, was brought up during the Soviet Union, where she says she was unable to find out much about religion. It was only in the 1980s, as restrictions lifted, that she even dared enter a church. As convents reopened in the early 1990s, she decided to become a nun.

"If I was going to serve God, I had to do it completely," she says. "Maybe that's just my character."

Fifteen years ago, she was sent to resurrect the convent in Serpukhov. "There were nothing but ruins, skeletons of buildings, trash and debris," she remembers.

She has since restored one of two churches and a residence. Initially alone, she attracted helpers, then new nuns. Some have since died; two have been tapped to start their own convents. She now has 12 sisters — far fewer than convents in major centers like Moscow.

Nonetheless, the convent is considered a historic monument, and the government has paid for the rebuilding. For daily needs and upkeep, the convent depends on pilgrims, donations and the sale of icons, as well as its gardens and livestock.

Mother Aleksiya says attracting new nuns is not as easy as it was a decade ago.

"Enthusiasm for becoming a nun is not as great as it was with the first explosion of interest in the church," she explains. "But maybe that's not so bad. Some thought it was an escape from poverty in the villages, an alcoholic husband or the loneliness of old age. Now, women fully understand what they are really getting into."

Orthodox nuns live within convent walls, largely cut off from the world, wearing formal black habits and bound by centuries of tradition. While happy with her vocation, Mother Aleksiya still expresses a little frustration.

"The current church does not fully value the role of women. I do not think women should be priests, but in the past women could be deacons," she says. "It's the same in the church as society. Many men don't understand women. They tell us to be quiet. They are wrong."

Orthodox churches have been criticized for being standoffish. Another nun here, 33-year-old Mother Georgia, hopes the Serperkhov convent can be a comforting place.

"People finally come to church for the first time. They don't know what to do. It's not right when people snub them for their ignorance," she says.

Compared with the modest goals at Serpukhov, the Spaso-Yeleazarovsky convent in distant western Russia has far greater ambitions — and, with this, far greater problems.

"At first, people were delighted that the convent was restored," says Raisa Shumkina, head of the local government, "and they could live within the sound of its bells. But then the mother superior demanded the only store for miles be closed because it is on what is now convent land.

"She started to expand the convent territory even farther. People are confused and angry."

Wood is still what heats most houses here. There are 10 tiny, poor villages, a beautiful lake and an abandoned communist-era farm, where a century ago there were acres of church territory.

Mother Superior Elizaveta wants to get it all back. She says she is willing to relocate villagers.

Grigory Nikolaichuk, 72, who lives next to the convent, says she has intimidated residents.

"She told those who didn't want to sell her their houses they would end up on the hill — the hill is where the cemetery is," he says. "That's how she curses and threatens people."

Mother Elizaveta believes God is on her side. And she's also got big political support. With pressure from the governor, a recent Kremlin appointee, the entire area was recently declared a protected zone, putting limits on what villagers can build.

So much attention is focused on this remote place because it was here that a 16th century monk espoused what many believe is Russia's religious destiny. According to this thinking, ancient Rome fell because of heresy. The second Rome, Constantinople, was brought down by infidels. The third Rome, Russia, is to illuminate the world.

As Mother Elizaveta explains, there is to be no fourth Rome. "Russia is the hope for all mankind. We answer for the whole world," she says. "And through the help of the state, we have been able to restore Russia's spiritual legacy."

Though there are only 20 nuns here, she has rebuilt not only the church but eight substantial buildings, with plans for a lot more development.

Longtime resident Sergei Borodulin has no intention of being pushed out — even to an apartment with modern conveniences — and he is none too happy with how government funds are being spent.

"This is serious money — millions and millions," he says.

Irina Golubeva, a respected art historian who heads the Pskov branch of the Russian Society for Restoration, says ambition, nationalism and bad public relations have created a huge mess.

She agrees this convent has historical importance, but she says Mother Elizaveta has been allowed to create a Disneyland of a convent that may satisfy dreams of greatness, but has little to do with the past.

"And this just adds to the mess," says Golubeva. "The big two-story buildings in no way resemble what was once there. As a historian, I am not happy, the local people are unhappy and, ultimately, she has ill-served the church."

As Russia seeks to restore its past and its identity, nothing, not even a convent, is simple — certainly not where property, money and politics are concerned.