Accessibility links
To Help Healing, Doctors Pay More Attention To Pain Pain might seem like something doctors deal with all the time, but it's actually difficult for doctors to measure and can be hard to treat. Controlling pain early on can decrease a patient's risk of developing chronic pain later. 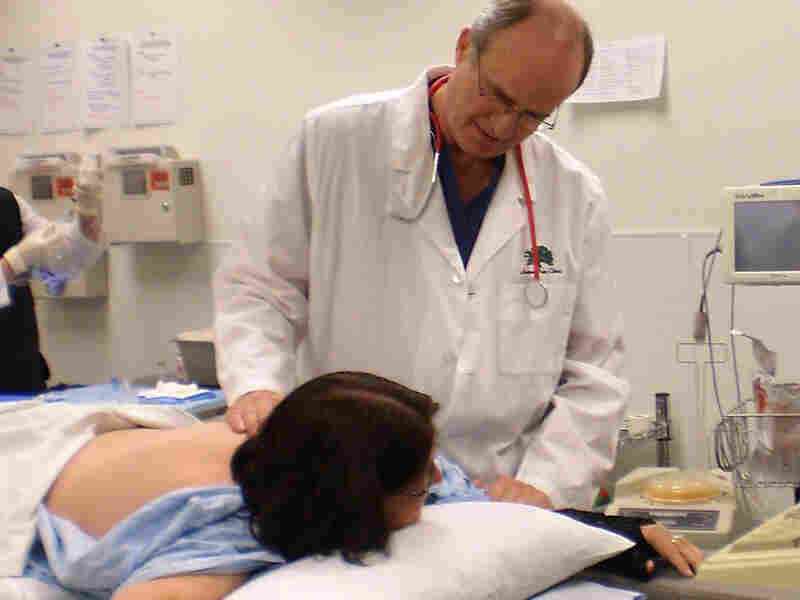 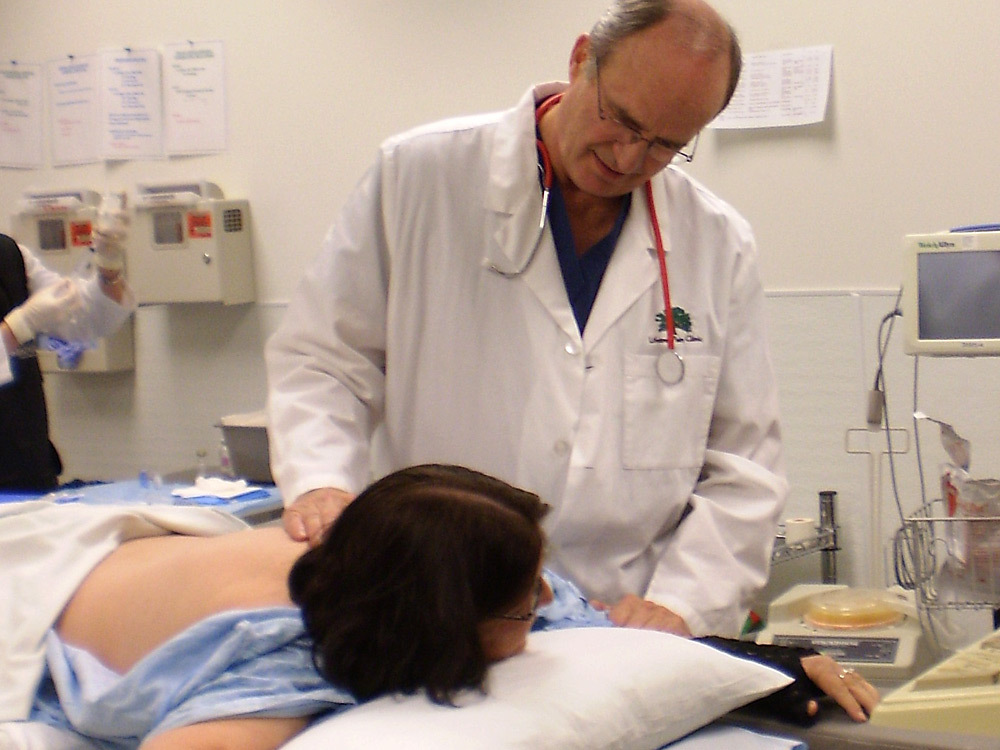 The old notion that pain is somehow "good" for you should be put to rest for good, say health officials. They are increasingly recognizing that control of pain leads to more rapid recovery for hospitalized patients, and can even cut costs.

While pain can function as the body's alarm that something is wrong, it can also be counterproductive, says Dr. Lynn Webster, who directs the Lifetree Clinical Research and Pain Clinic in Salt Lake City.

"Most of us just want to lie there, because if we move after an operation or major trauma, it hurts. So, it does seem intuitive that's the thing to do so we can heal," Webster says.

But when patients just lie there, Webster says they're putting themselves at risk. "Patients who have good post-op pain control are able to breathe better," says Webster. Deep breaths can prevent the development of pneumonia, which can lead to sepsis and, in severe cases, require that patients be put on a ventilator. If patients can get up and walk fairly quickly after a procedure, then they also decrease their risk of blood clots in the legs which, in some cases, can be fatal.

Controlling acute pain in the hospital setting can also decrease a patient's risk of developing chronic pain later on. When people begin to feel pain, Webster says the body begins to set up an inflammatory process in the central nervous system that's "hard to quiet down." For some people, that inflammation begins to feed on itself and, once discharged from the hospital, patients may go on to experience pain for months, even years afterward. 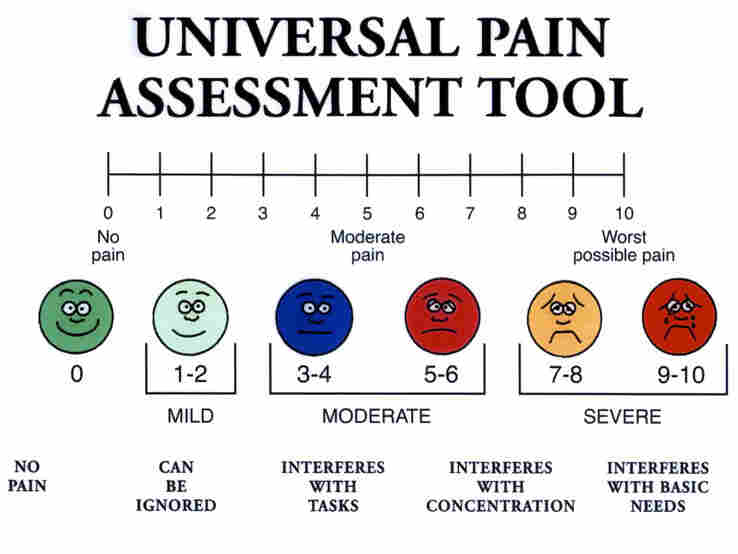 The Wong-Baker facial grimace scale is a common way for patients to let doctors know how much pain they are in. It goes from zero, which means happy and in no pain, to 10, which is unhappy and as much pain as you can imagine. UCLA hide caption 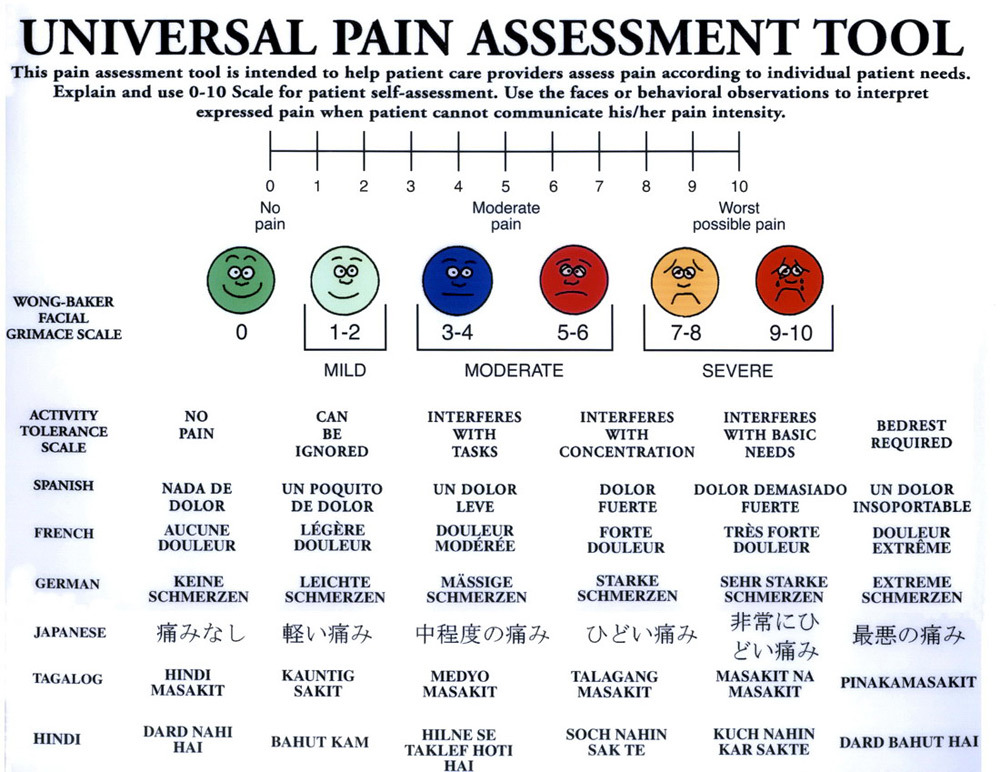 The Wong-Baker facial grimace scale is a common way for patients to let doctors know how much pain they are in. It goes from zero, which means happy and in no pain, to 10, which is unhappy and as much pain as you can imagine.

Nearly 10 years ago, the Joint Commission, which accredits hospitals, set new standards for how pain should be treated. It recommended that health providers routinely ask patients about the intensity of their pain — and then do something about it.

In fact, measuring pain has been coined the "fifth" vital sign, along with blood pressure, heart rate, temperature and respiration.

In most hospitals nationwide today, there is a 1 to 10 scale for patients to rate their pain. Compared to a decade ago, more hospitals are paying attention to pain management today, says Dr. Linda Hertzberg, an anesthesiologist at St. Agnes Medical Center in Fresno, Calif., and president of the California Society of Anesthesiologists.

The pain scale is often a visual image of a series of circles, starting with a smiley face that begins to diminish, circle by circle, until it becomes a full-blown tearful frown. Zero is no pain; 1 to 2 is considered mild pain; 3 to 6 is moderate pain; and 7 to 10 is severe pain.

It's nearly impossible to experience absolutely no pain after surgery or a procedure, says Hertzberg. And doctors do want patients to be conscious. Hertzberg says that when patients define their level of pain, it helps doctors target their treatment.

Methods for treating pain have advanced dramatically over the past decade, starting with the discovery in the mid-1980s that medication could be delivered directly into the spinal cord and prevent the brain from ever receiving information about pain, or even the surgery or procedure being performed — the medication literally stops the pain signals in their path.

"There's also peripheral nerve blocks, where you can, say, numb up someone's arm or shoulder, or numb up their leg for a period of up to 24 hours," adds Hertzberg. Advances in nonsteroidal anti-inflammatory pain medications have improved treatment, too, he says.

Webster describes all these changes as "revolutionary." Even so, they haven't filtered down to all hospitals and health care institutions. There are still "a lot of misconceptions" about pain, especially in the medical community, says Micke Brown, a nurse and the communications director for the American Pain Foundation. 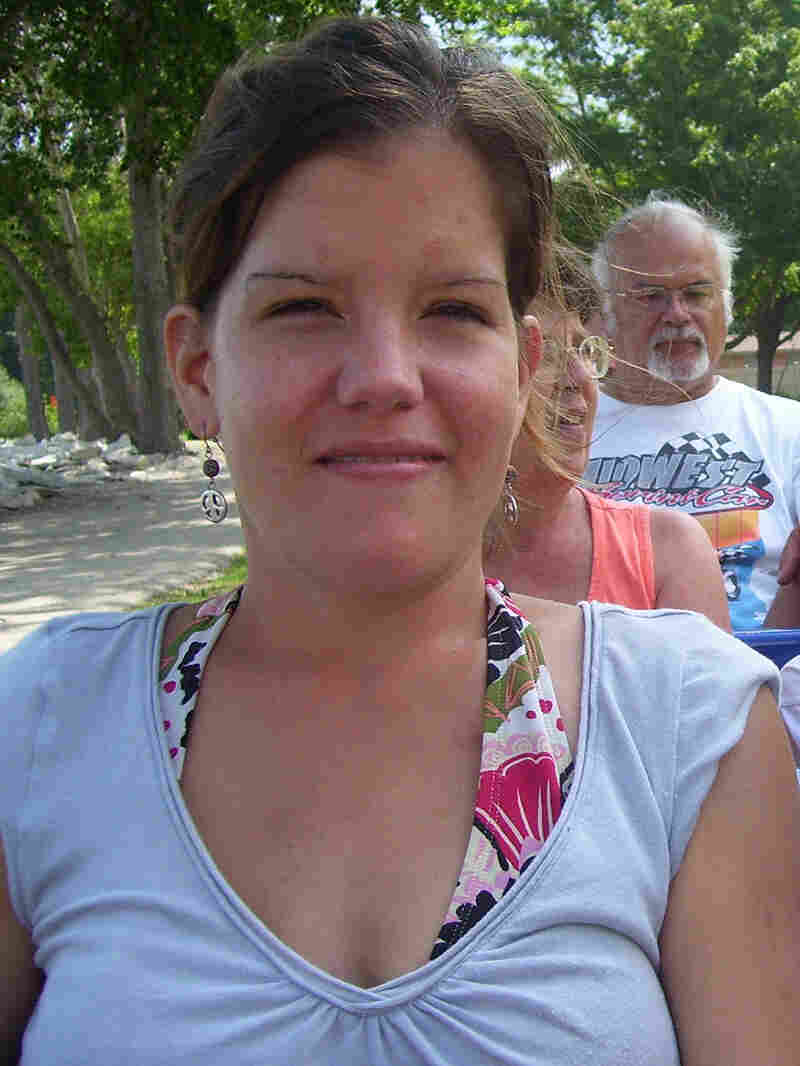 Erica Thiel, 26, has a rare genetic disorder called MPS I, or mucopolysaccharidosis I. The disorder affects many body systems and can lead to organ damage, so she has undergone multiple surgeries. Thiel now sees a pain specialist. Erica Thiel hide caption 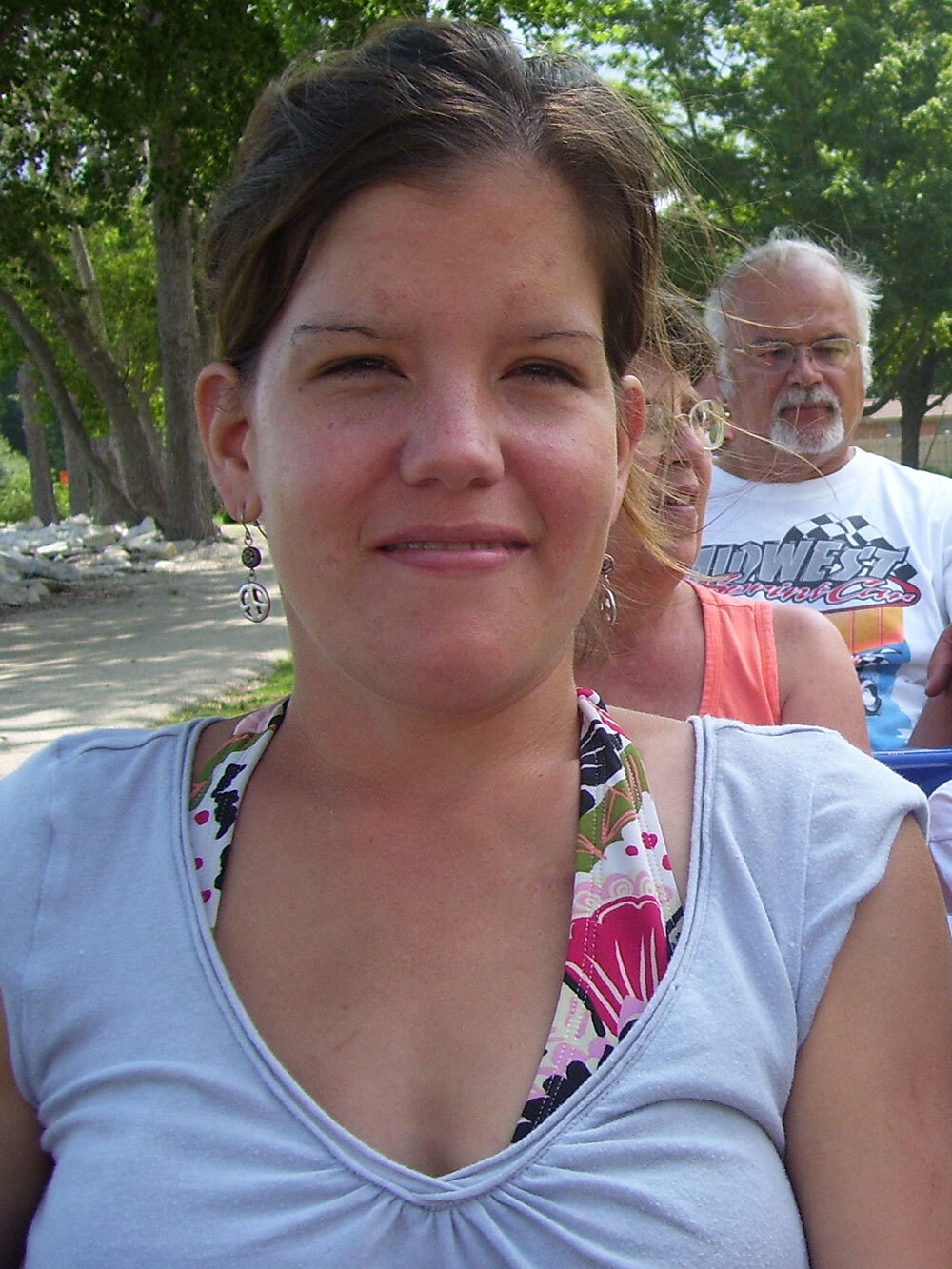 Erica Thiel, 26, has a rare genetic disorder called MPS I, or mucopolysaccharidosis I. The disorder affects many body systems and can lead to organ damage, so she has undergone multiple surgeries. Thiel now sees a pain specialist.

Erica Thiel, 26, who has a rare genetic disorder involving enzyme deficiency called mucopolysaccharidosis I (MPS I), fell victim to those misconceptions for years. Thiel has had dozens of surgeries and procedures for joint, heart, brain and spinal cord problems. And, she says, she's endured lots of pain in different hospitals, most recently from abdominal surgery.

During her hospital stay, Thiel was treated by a number of medical residents. "I just kept asking them if there was something different we could do for pain control. I felt awful," says Thiel. "I couldn't sleep. I couldn't roll from side to side. They kept telling me to go to sleep, try to relax. I spent hours that night in tears, really upset."

Thiel says she was nearly hysterical because she thought that nobody believed her — they thought her pain was all in her head.

Thiel now goes to a pain specialist who helps coordinate her care whenever she is admitted to the hospital.

Webster says it can be challenging for doctors to treat pain, because it's subjective and, therefore, difficult to measure. There's no physiological test or X-ray that can tell doctors exactly how much pain patients feel, and where.

No Universal Measure Or Fix

And, because we are all genetically different, we may respond to the same amount of pain in different ways, says Webster. Some patients feel severe pain as a result of certain types of surgery or procedures, while others feel only modest or mild pain. In addition, each patient has a different response to pain relievers.

"There may be a tenfold difference in our response from one individual to another with the same drug given for the same amount of pain stimulus," says Webster, adding that "this is not something that has been appreciated for long within the medical field, and probably is still not appreciated by most physicians who are not in our field."

Health professionals like Webster would like to see the treatment and management of pain standardized as a medical specialty that is as rigorous as cardiology or pulmonology. In the meantime, Webster says patients should be their own advocates, sitting down with their physician, surgeon or nurse before any surgery that's not an emergency, and talking about what kind of pain can be expected and the various options available to control it.