Accessibility links
Water Ice Hides In Moon's Dark Craters A rocket set on a collision course with the moon reveals it's not just a dull, dry satellite. Water lurking in its craters could someday provide everything from drinking water to rocket fuel for astronauts exploring the moon.

The presence of water on the moon could enable astronauts to make their own breathing oxygen and to use the moon as sort of a space-based filling station. NASA/AP hide caption

The presence of water on the moon could enable astronauts to make their own breathing oxygen and to use the moon as sort of a space-based filling station.

NASA has new evidence that dark craters on the moon contain hidden stores of water in the form of ice.

In October, the LCROSS mission sent an empty rocket hull crashing into a dark, cold crater near the moon's south pole. The idea was to kick up the lunar dust to see what might be hiding at the bottom of the moon's permanently shadowed craters, places that haven't seen sunlight for billions of years.

The impact created a hole about 60 to 100 feet wide, and sent dust and debris soaring up. The plume was analyzed by instruments on an observing spacecraft. That spacecraft sent the data back to Earth, and Colaprete says scientists have been studying it around the clock.

At a press conference, Colaprete holding up a white plastic bucket, said, in all the debris blasted out of the moon, they found enough water to be the equivalent of "maybe about a dozen of these two-gallon buckets." 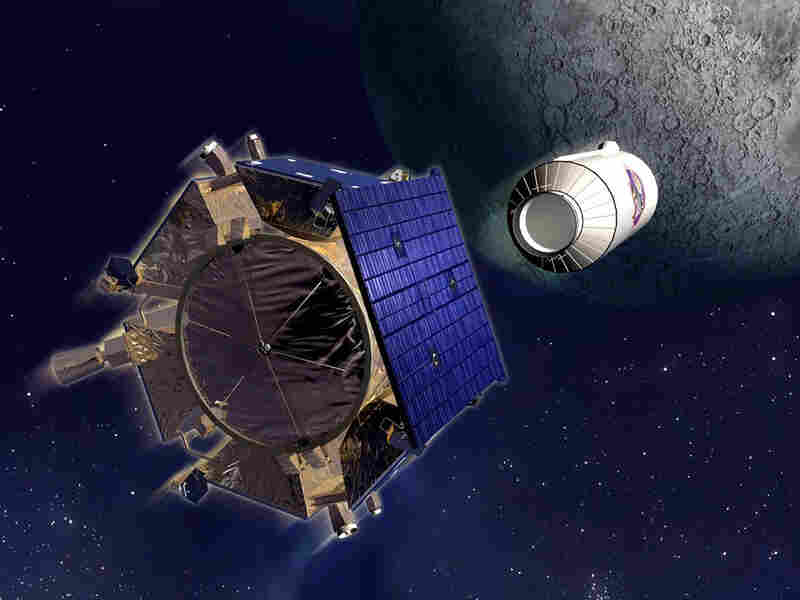 An artist's rendition of the LCROSS spacecraft separating from its rocket as it heads on a collision course with the moon. NASA/AP hide caption 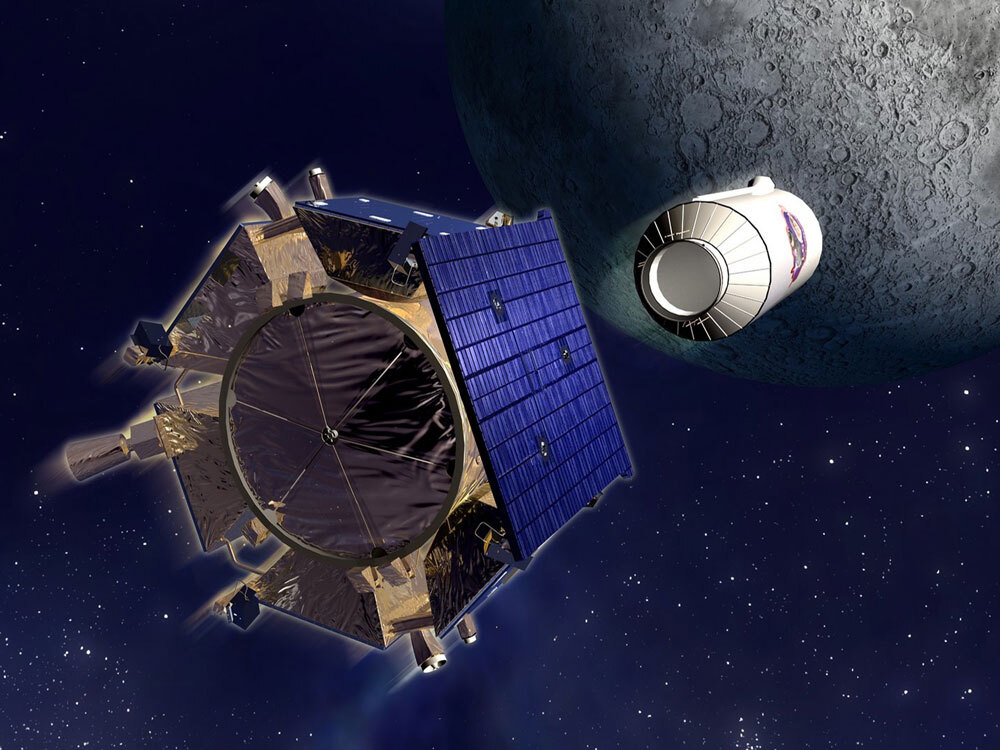 An artist's rendition of the LCROSS spacecraft separating from its rocket as it heads on a collision course with the moon.

The moon has been thought to be drier than the driest deserts here on Earth, but Colaprete calculates that the spot they hit is "wetter than some deserts on Earth." He specifically mentioned the Atacama desert in South America. "It would, I think, be probably safe to say that it is on par or maybe a little bit wetter than that desert," he said.

Now that researchers know that ice is in the moon's dark craters, they want to figure out where it came from. Greg Delory, a planetary scientist at the University of California, Berkeley, said it's possible icy comets dumped the material on the moon, or maybe it came from some kind of activity inside the moon.

This finding and other recent discoveries, such as the realization that tiny amounts of water are scattered all over the moon's surface, show that "this is not your father's moon," says Delory. "Rather than a dead and unchanging world, it could in fact be a very dynamic and interesting one."

And NASA officials interested in human exploration say water is also potentially a very handy resource, for everything from drinking water to rocket fuel. Michael Wargo, chief lunar scientist for exploration at NASA headquarters, says that the water in lunar craters "could be the key to sustainability for exploration. So having it there is going to be extremely valuable to us, even if right now we can't go swimming in it."

NASA currently aims to send astronauts back to the moon by 2020. But the Obama administration has been reconsidering those plans, after a blue-ribbon panel of independent experts said NASA can't meet that goal on its current budget.