Accessibility links
While U.S. Economy Struggles, China's Rises As the U.S. slowly recovers after sparking the global financial crisis, China appears to be leading the world out of recession. But some Chinese say their economy has a long way to go, and America still has some big advantages. 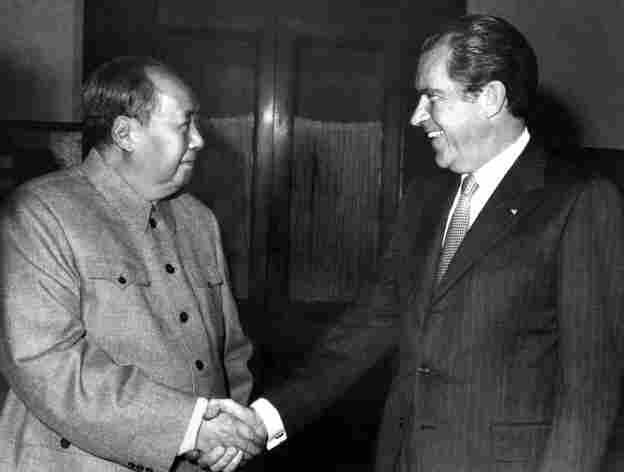 A humbled United States is slowly recovering after sparking the global financial crisis. China, on the other hand, has handled the downturn with ease and appears to be leading the world out of recession, while increasing its influence in Asia.

But Chinese people say their economy has a long way to go, and America still has some big advantages.

When President Nixon went to Beijing in 1972 to begin to establish relations, there was no sign that China would one day become an economic superpower.

In those early days, Chinese leaders insisted that they didn't need American products and didn't want to make them, either.

Gene Theroux traveled to China back then as special council to a congressional economic committee. He recalled General Electric executives pressing the Chinese to consider GE products at a trade fair.

"If they tried to leave an electric fan on a table and said, 'Just take a look at it and let us know if you want to make it,' it was returned to them," Theroux recalled, "even if Chinese officials had to chase them down a hallway to return it."

"They were not interested in manufacturing anything that would carry a brand name of an American company," he says.

China got over that. 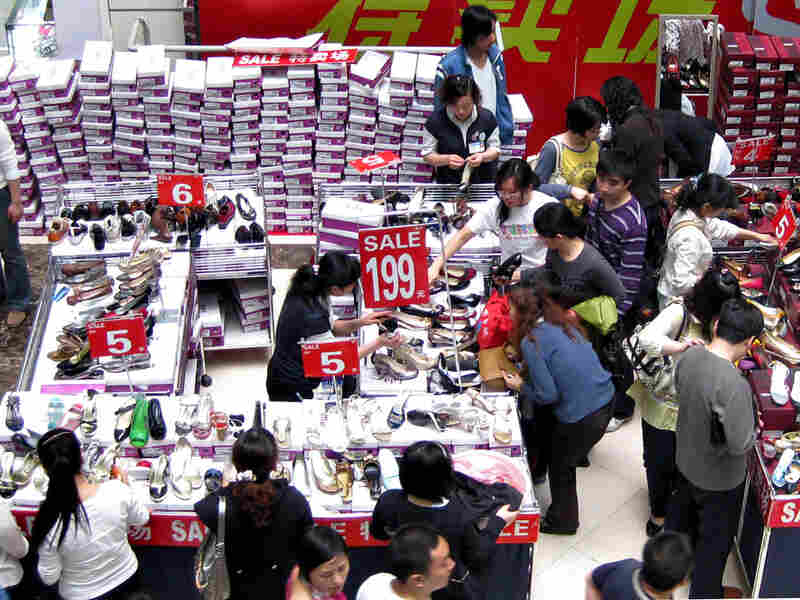 Chinese shoppers buy shoes on sale during a promotion at a shopping mall in Beijing, in April 2009. Imaginechina via AP Images hide caption 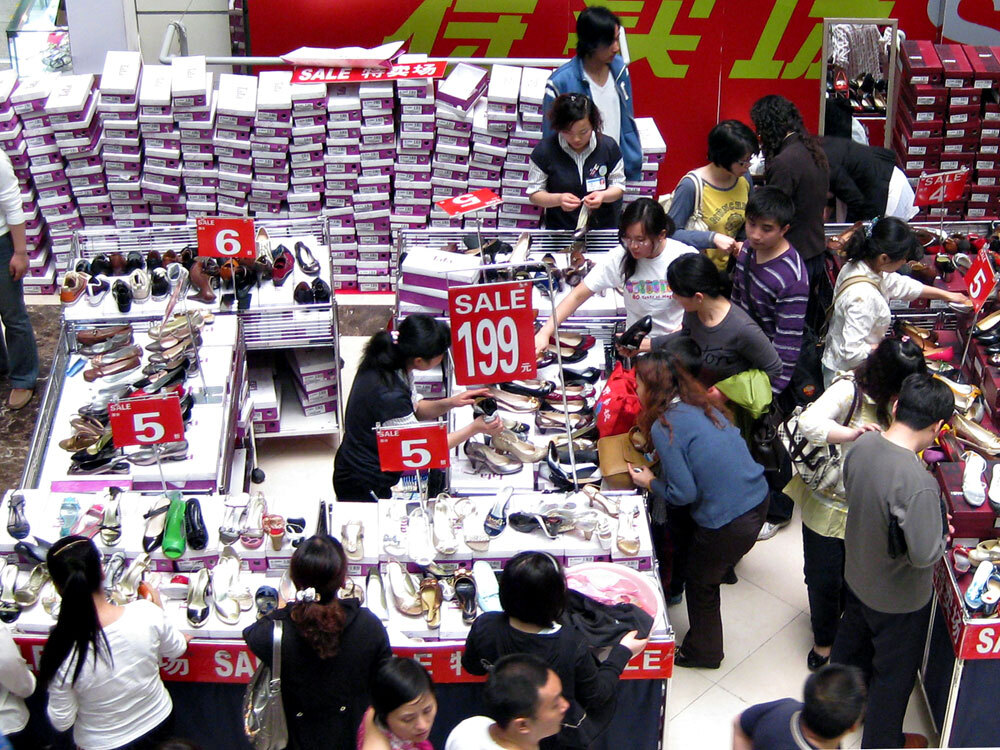 Chinese shoppers buy shoes on sale during a promotion at a shopping mall in Beijing, in April 2009.

In 1992, Chinese leader Deng Xiaoping flung open the doors to foreign investment. Since then, the Chinese have sold so many of those products back to Americans that China now has more than $2 trillion in foreign currency reserves — more than any other country.

Depending on the estimate, China is now either the second- or third-largest economy in the world.

During the financial crisis, the country has used some of its fortune to prop up its economy with stimulus spending. Yih-Chyi Chuang, an economics professor at Taiwan's National Politics University, says China has also provided nearly $30 billion in aid to neighboring countries in East Asia.

"Who else can do that but China at this critical point?" says Chuang, who adds that — at this moment — China's economy is more important in Asia than America's.

A New Confidence And Lots Of Big Money

China's rise is even influencing relations between American employers and Chinese workers. James McGregor, a Beijing-based U.S. businessman, says that most young, urban Chinese have only known prosperity. And, he adds, they aren't so impressed by working for an American company anymore.

"I used to hire people, and they would come and they would say, 'I will work for free, and I will work day and night, and I will prove myself,' " says McGregor, author of the book One Billion Customers. "Now, they're coming in like American kids, saying, 'What's your vacation policy, and when do I get a title and my own office?' "

You can find that same confidence today in the shopping malls of Shanghai and Beijing, where there is no evidence of last year's crisis. Li Wenjie is strolling through Beijing's Shin Kong Place, a luxury mall where stores include Burberry, Tag, Fendi and Coach.

A burly man, Li wears a sweater and is carrying shopping bags from Gucci and Chanel. "I bought a silk scarf, socks and underwear," says Li. "It's relatively expensive — nearly $600."

Li works in the telecom business. He says his company has done well laying fiber-optic cable as part of the government's massive stimulus program.

When asked if the recession in America has affected his life here, Li answers, "There's been no influence. There was probably some impact on foreign trade, but there was no problem domestically. I have a lot of confidence in the economy."

Zhao Ziying is visiting from Hong Kong and has just spent $600 on a blue Prada bag she can't find back home.

"The Chinese people, they come and buy everything, even apartments," she says. "Have you heard? Seventy-thousand Hong Kong dollars per square foot. Unimaginable!"

But Zhao is skeptical about all that spending. She thinks most of it is driven by the government stimulus program.

"Otherwise," she says, laughing, "they've got a machine back home printing money."

Andy Xie, a former economist with Morgan Stanley and a popular blogger, says China is actually caught up in a real estate bubble.

The government has poured billions of dollars into the mortgage market. Xie says that has sent prices skyrocketing, making the economy look better than it is.

In fact, exports — which make up roughly one-third of China's gross domestic product — plunged after the United States went into recession.

"The issue is how sustainable this property boom is," Xie says. "If you throw more money at a bubble, it does become larger in the short term and helps the economy. But if it bursts, it can bring disaster, as we're just witnessing now in the U.S."

In America, Fear Of Falling Behind

The last year has shaken Americans' confidence, and many fear China's economy will overtake and eventually dominate the United States. But Yi Xianrong, an economics professor at the Chinese Academy of Social Sciences, cautions people in the United States not to overreact.

"Americans don't have to worry at all," he says.

Instead, he says, Americans need to see China's economy in context. Even if it becomes bigger than America's — as most analysts expect — many Chinese will still be relatively poor.

For instance, the per capita income in the U.S. is more than $40,000, while in China, it is around $3,200. And in much of the rural part of the country, people still scratch a meager living from the earth.

"You have to go to the west to see how poor people are there," Yi says. "Sixty years after the Chinese revolution, people's life there would make you cry."

In some ways, that scene in the Beijing luxury mall is as dazzling as it is unrepresentative. And for Americans anxious about their country's future, Yi says the United States has several advantages that can't be underestimated.

"Why is America's economy so good?" he says. "The first is education. The world's best universities are in America."

The second advantage, Yi says: The U.S. has the best high-tech talent in the world.

Finally, Yi concludes, "you have a good political system: democracy" — one that Yi says allows the U.S. to solve problems quickly.

Like most Chinese, Yi is optimistic about China's economy in the long run.

But he notes that — of those three advantages fundamental to America's success — China has none of them.