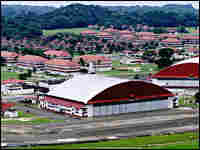 One of Panama's largest development projects will be constructed on the site of the former Howard U.S. Air Force Base. Joe Skipper/Reuters/CORBIS hide caption 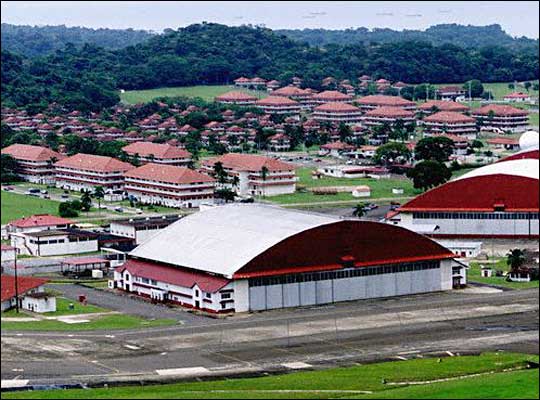 One of Panama's largest development projects will be constructed on the site of the former Howard U.S. Air Force Base. 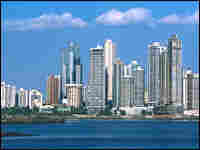 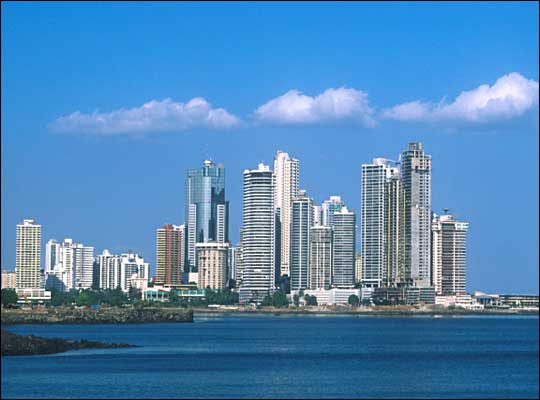 Panama City's skyline is testament to the nation's construction boom.

Fueled by a rash of new construction, Panama's economy is thriving and attracting notice all over the world, but some say that the country's economic surge is straining its infrastructure.

The tiny Central American country is now one of the fastest-growing economies in the region, experiencing a growth rate of 8 percent last year. That rate is expected to be even higher this year, making it the Latin American powerhouse.

The economic boom comes amid efforts by the Panamanian government to market itself as a financial haven in an area of instability, drawing investors from across the region and the world.

In a cavernous sweltering hall on the former Howard U.S. Air Force Base, all of Panama's ministers and President Martin Torrijos gathered to sign an agreement to construct what will become one of the largest development projects in the country's history.

The project, worth up to $10 billion, will include a media city, an industrial area and a residential town on the shores of the Panama Canal, the site of the former base. For a country of only 3 million, its scale – the size of central London — is massive.

British company London & Regional will manage the project, and Ian Livingstone, the company's managing director, says the expansion of the Panama Canal, new refinery and ports projects, and a possible free-trade agreement with the U.S., all make Panama attractive.

"Panama is going through a big economic boom at the moment. It is a stable oasis for investment in a part of the world that isn't always quite as stable as Panama. We see huge opportunities," Livingstone says.

American money is also pouring in, and the wealthy of Bolivia, Venezuela and Ecuador, nervous about the direction of their own governments, are also investing.

More than anything else, construction is driving the boom, and the Panama skyline is showing the result.

Many of the buildings are high-rises whose skeletons are making Panama City look like an out-of-water coral reef. More than 11,000 apartments are coming online this year, and already they have all been sold.

While positive in many respects, the economic boom is causing its own set of difficulties. At the main thoroughfare between the old and new sections of Panama City — where all the high-rise buildings are being constructed — traffic is bumper to bumper, and Panamanians have been noticing more and more that the new construction is placing a strain on the country.

Man says speculators are playing a huge role in the market, and some landmark projects have already been pulled because they simply weren't viable.

Though it's marketing itself as a first-world destination, Panama isn't there yet, Man says.

Panama is plagued by a high level of corruption and is run by a white oligarchy that is profiting from the economic boom. Its judicial system is in serious need of reform.

Countries in Latin America have a very poor track record of making sure that everyone benefits from economic growth, and Panama, with one of the most unequal distributions of wealth in the region, is no exception. Despite the money pouring in, so far that disparity has not changed.