Accessibility links
The Nation: Pro-Choicers Backing Down? Fat Chance The Stupak-Pitts amendment, banning abortion coverage from federally subsidized health insurance policies, is a hot topic. It's been encouraged that pro-choicers should take one for the team and let this slide, all in the name of greater health reform. But why should pro-choicers abandon their cause? 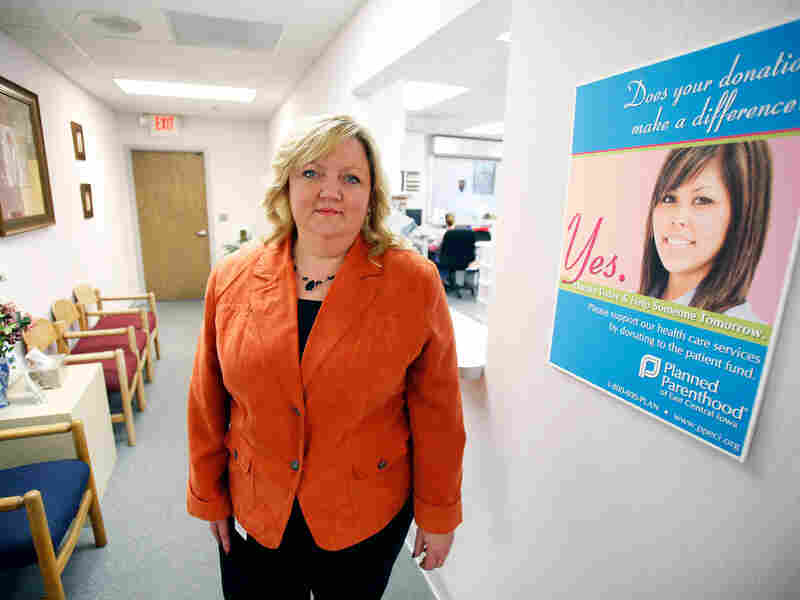 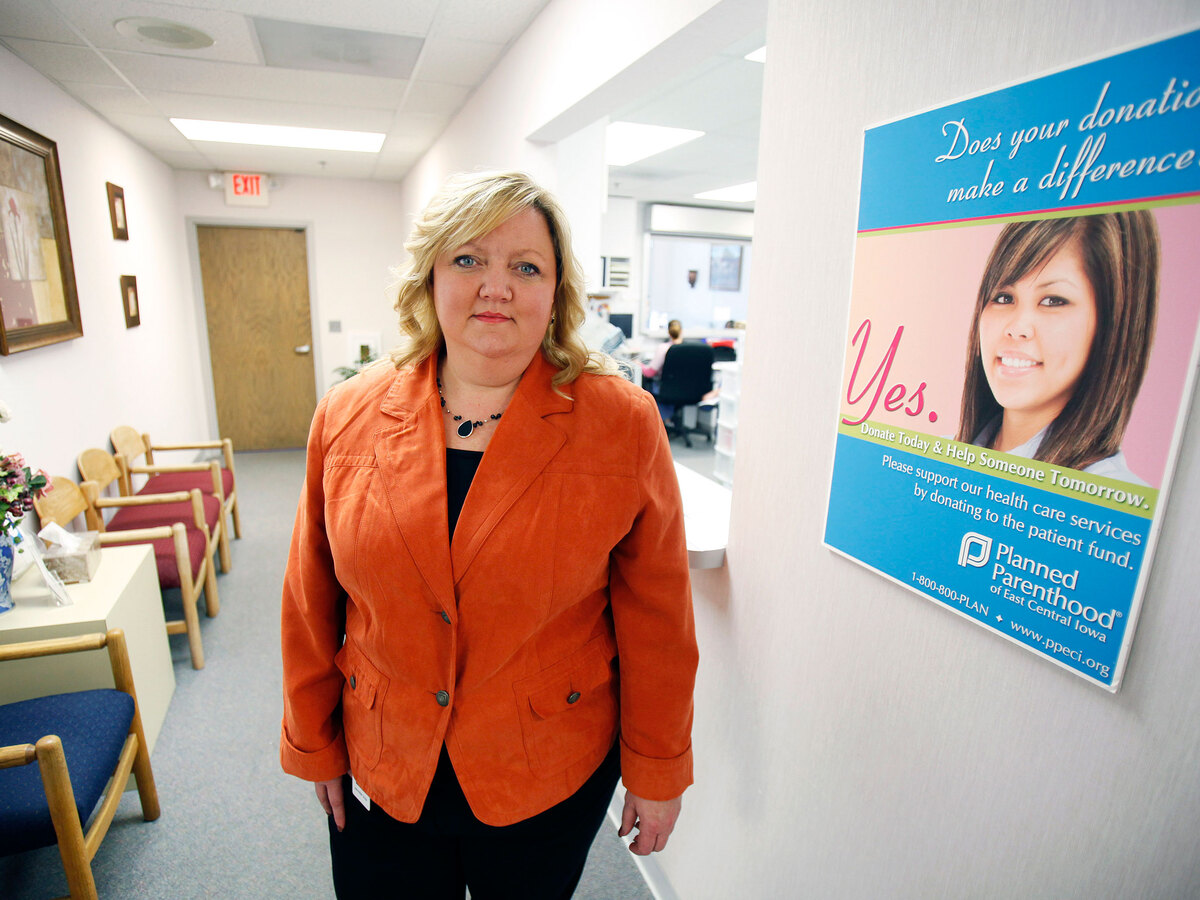 Spokeswoman Jenifer Vick stands in the hallway at the Planned Parenthood of East Central Iowa, March 24, 2009, in Cedar Rapids, Iowa.

You know what I don't want to hear right now about the Stupak-Pitts amendment banning abortion coverage from federally subsidized health insurance policies? That it's the price of reform, and prochoice women should shut up and take one for the team. "If you want to rebuild the American welfare state," Peter Beinart writes in the Daily Beast, "there is no alternative" than for Democrats to abandon "cultural" issues like gender and racial equality. Hey, Peter, Representative Stupak and your sixty-four Democratic supporters, Jim Wallis and other antichoice "progressive" Christians, men: why don't you take one for the team for a change and see how you like it?

For example, budget hawks in Congress say they'll vote against the bill because it's too expensive. Maybe you could win them over if you volunteered to cut out funding for male-exclusive stuff, like prostate cancer, Viagra, male infertility, vasectomies, growth-hormone shots for short little boys, long-term care for macho guys who won't wear motorcycle helmets and, I dunno, psychotherapy for pedophile priests. Men could always pay in advance for an insurance policy rider, as women are blithely told they can do if Stupak becomes part of the final bill.

President Obama, too, worries about the deficit. Maybe you could help him out by sacrificing your denomination's tax exemption. The Catholic Church would be a good place to start, and it wouldn't even be unfair, since the blatant politicking of the US Conference of Catholic Bishops on abortion violates the spirit of the ban on electoral meddling by tax-exempt religious institutions. Why should antichoicers be the only people who get to refuse to let their taxes support something they dislike? You don't want your tax dollars to pay, even in the most notional way, for women's abortion care, a legal medical procedure that one in three American women will have in her lifetime? I don't want to pay for your misogynist fairy tales and sour-old-man hierarchies.

Women Democrats have taken an awful lot of hits for the team lately. Many of us didn't vote for Hillary Clinton in the primary because the goal of electing a woman seemed less important than the goal of electing the best possible president. Only a self-hater or a featherhead didn't feel some pain about that. And although women are hardly alone in this, we've seen some pretty big hopes set aside in the first year of the Obama administration. The Paycheck Fairness Act, which would expand women's protections against sexism in the workplace, is on the back burner. Meanwhile, the Office of Faith-Based and Neighborhood Partnerships is not only alive and well; it's newly staffed with antichoicers like Alexia Kelley of Catholics in Alliance for the Common Good, who, as Frances Kissling notes in Salon, has compared abortion to torture.

I know what you're thinking: conservative Democrats like Stupak took Republican districts to win us both houses of Congress. Thanks a lot, Howard Dean, whose bright idea it was to recruit them, but those majorities would not be there, and Obama would not be in the White House, if not for prochoice women and men--their votes, talent, money, organizational capacity and shoe leather. We knocked ourselves out, and it wasn't so that religious reactionaries like Stupak--who, as Jeff Sharlet writes in Salon, is a member of the Family, the secretive right-wing Christian-supremacist Congressional coven--would control both parties. Elections have consequences, you say? Exactly: Obama, the prochoice, prowoman candidate, won. Stupak didn't put him in the White House, and neither did the Catholic bishops or the white antifeminist welfare staters of Beinart's imagination. We did. And we deserve better from Obama than sound bites like "this is a healthcare bill, not an abortion bill." Abortion is healthcare. That's the whole point.

What makes the Stupak fiasco especially pathetic is the fumbling response from prochoicers. Missouri Democrat Claire McCaskill would not be in the Senate today were it not for prochoice and feminist supporters like EMILY's List. How does she thank us? By telling Joe Scarborough that Stupak isn't so bad, that it won't affect "the majority of America" — just low-income women — and that it's "an example of having to govern with moderates." So people who'll tip healthcare reform into the trash unless it blocks abortion access are the moderates now! (McCaskill took it back later that day, but the damage was done.) If I ever give that woman another dime, shoot me.

The big prochoice and feminist organizations are up in arms — NOW and Planned Parenthood want to see healthcare reform voted down if Stupak is retained — but writing in the Daily Beast, Dana Goldstein nicely captures the bewilderment of leaders caught by surprise. "It's the feeling that you've been rolled," said Eleanor Smeal, of Feminist Majority. Or haven't been paying attention. Smeal was onto something, though, when she told Goldstein, "Here we are playing nice guy again, we didn't want to make a fuss." Consciously or unconsciously, by not organizing in advance to insist on coverage of abortion, prochoicers set themselves up to be out-maneuvered. In fact, as Sharon Lerner reported on TheNation.com, Democrats stood by while antichoicers kept contraception out of the reform bill's list of basic benefits all insurers must cover. So much for the "common ground" approach where we all agree that birth control is the way to lower the abortion rate.

Enough already. Prochoicers have been taking one for the team since 1976, when Congress passed the Hyde amendment, which Jimmy Carter would later defend with the immortal comment, "There are many things in life that are not fair." Time for the theocrats and male chauvinists to give something up for the greater good — to say nothing of the twenty prochoicers, all men, who supported Stupak out of sheer careerism. After all, if it weren't for prochoicers, there wouldn't be much of a team for them to play on.