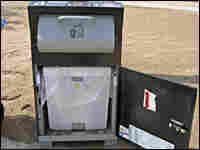 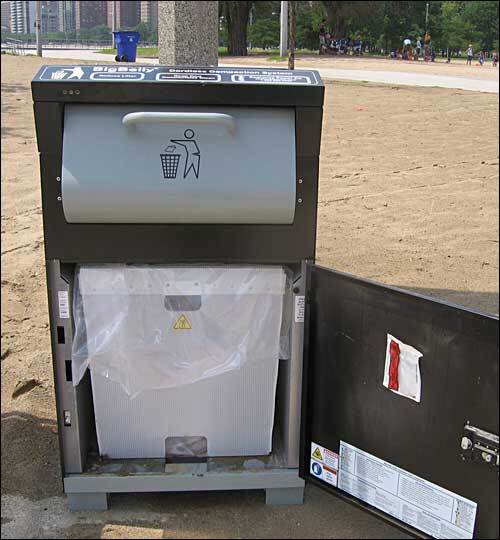 An open "Big Belly" trash compactor on the North Avenue Beach in Chicago.

In the summer months, Chicagoans flock to the city's beautiful Lake Michigan waterfront. Given the kinds of winters they have to put up with, you can understand why.

But one of the drawbacks to a day at the beach is the garbage.

"I think a lot of times, the beaches do get dirty," observed Dan Quinn of suburban Burr Ridge, Ill. on a recent afternoon.

Quinn's 4-year-old daughter, Ava, splashed around in the clear, shallow water, while he looked up and down the beach. He pointed to some ring-necked gulls digging in the sand.

" I just saw a seagull picking at a lime over there that someone must have dumped off a margarita they had last night," Quinn says.

The birds are a real problem. Their droppings contribute to high levels of E.coli bacteria in the water, which forces the Chicago Park District to ban swimming periodically on some beaches.

When the garbage cans fill up and overflow, the gulls have their own buffet.

And the 55-gallon drums the city used to use overflowed often. Gulls and pigeons perched on the open edges and picked through the food. Some beachgoers would just leave their garbage near the cans, not in them.

Last year, the city tried 95-gallon plastic carts with lids. But the wind often blew them over, and many people didn't close the lids.

So this summer, the Chicago Park District has turned to Big Bellies.

"A big belly is a trash can," says Ellen Sargent, the district's deputy director of natural resources. "These trash cans have a solar-powered trash compactor in them."

The trash compactor smashes down the garbage, reducing its volume so the receptacles don't have to be emptied as often. The Big Bellies are fully enclosed, so there's no overflow problem. And they're heavy and anchored down, so they can't be blown or knocked over. That limits the amount of trash strewn across the beach, and hopefully, forces gulls and pigeons to find lunch elsewhere.

Marcel Washington, the park district's north lakefront maintenance foreman, says Big Bellies are easy to use. They have a pull-down handle on a small door at the top, "like a mailbox," says Washington. "Once they put the trash in and close the door… the trash drops down."

The olive-colored Big Belly kind of looks a mailbox, too, but with a solar panel on top that recharges a 12-volt battery. Washington says garbage fills up the container until it reaches the level of an electric beam near the top.

"That will trigger the ram, which compacts it," he says. "That process happens several times until we reach the maximum volume of trash the machine can hold."

That's about 200 gallons of regular garbage. The park district saves money by making fewer trips to the beach with the city's big, smelly, inefficient garbage trucks.

The Big Belly is the brainchild of Jim Poss, a self-described gadget-lover from Needham, Mass. Poss was working on making electric cars when inspiration struck.

"The idea hit me probably about six years ago, when I was walking down a busy street in Boston," he says, "and I noticed that all the garbage cans were overflowing with mounds of garbage. And it just hit me that there's a better way."

In addition to the unsightly mess, Poss says he was also inspired by the diesel-devouring garbage trucks used to collect the trash: "They are the least efficient vehicles on the road…and they idle about 70 percent of the time."

Poss created a company called Seahorse Power, developed the first Big Belly and sold the first unit in 2005. Now there are Big Bellies on street corners, in parks and on beaches in several cities, including Boston, Baltimore, Cincinnati, New York and Vancouver. They're being used in some state and national parks, too.

On a beach or in a park, there is more than enough direct sunlight to power the Big Belly's battery. But Poss notes that his company did have trouble developing a trash compactor that would generate enough power on shadowy street corners or in cavernous alleys, amidst tall buildings.

"The sun doesn't find its way into the nooks and crannies of a city very well," Poss says.

With that problem solved, many municipalities are eager to try the high-tech trash compactors. Poss says Seahorse Power is developing bigger models and will soon be able to equip them with wireless technology that would alert workers when the bellies are full. That way, employees are not wasting fuel driving around to check on the compactors.

Big Bellies cost nearly $4,000 each. But Chicago and other cities hope they ultimately save money by tapping one of the beach's most plentiful resources.