Accessibility links
Movie Review - 'Defamation' - Exploring The Politics Of 'Defamation' Israeli filmmaker Yoav Shamir's documentary is a bracing inquiry into arguments about the prevalence of anti-Semitism today. If the filmmaker displays an anthropologist's openness to complicated truths, he also has a contrarian's impish appetite for the opposing view — the more intemperately expressed the better, it would seem.

Exploring The Politics Of 'Defamation'

Exploring The Politics Of 'Defamation' 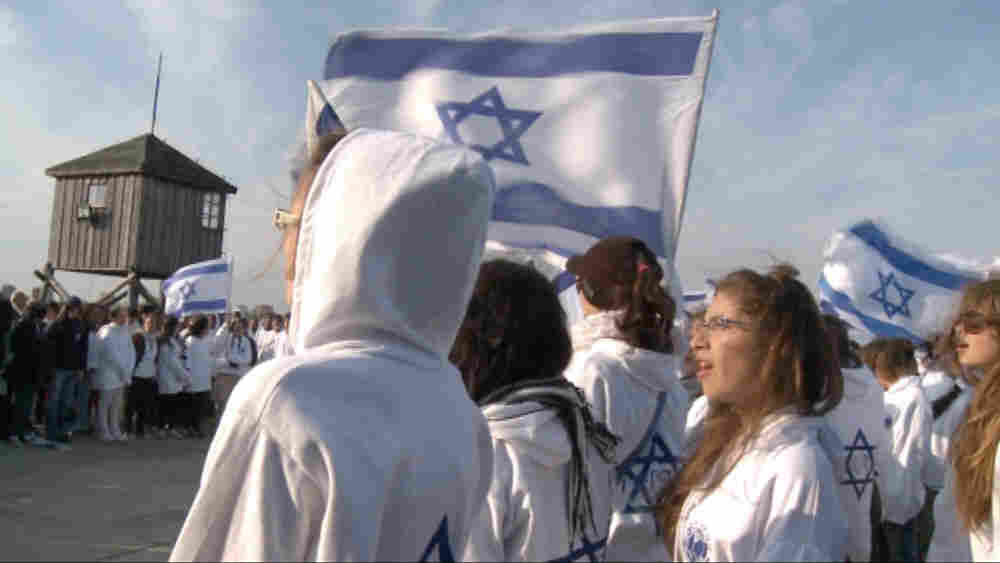 A Flag Is Borne: Filmmaker Yoav Shamir follows Israeli high-schoolers to Auschwitz as part of his inquiry into modern anti-Semitism — and whether some activists overstate its prevalence. First Run Features hide caption 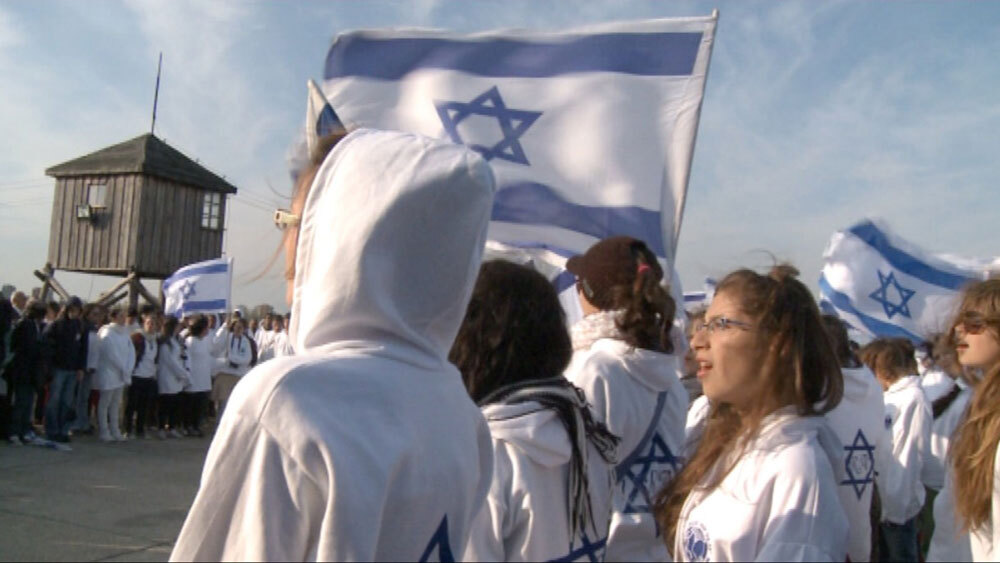 A Flag Is Borne: Filmmaker Yoav Shamir follows Israeli high-schoolers to Auschwitz as part of his inquiry into modern anti-Semitism — and whether some activists overstate its prevalence.

Showing the Israeli filmmaker Yoav Shamir around the New York offices of the Anti-Defamation League, the group's jovial national director, Abraham Foxman, tells a colleague, "He's a journalist, so he wants good stuff."

Shamir gets very good stuff for Defamation, a bracing inquiry into beliefs about the prevalence of world anti-Semitism today, but it's doubtful that Foxman will think so. Depending on which parts of the film you respond to, Foxman has either dedicated his life to making the world safe for the Jewish people or reaped a handsome living by stoking fears that hatred of Jews — far from being extinguished by the defeat of the Nazis — is alive and kicking all over the globe, including in the United States, long regarded as a safe haven for Jews and a staunch defender of Israel.

Shamir isn't out to get Foxman, who's a Holocaust survivor and one of the nation's most powerful pro-Israel lobbyists, but the filmmaker clearly takes a different view of what's good for the Jews and for the soul of Israel. A member of Israel's peace movement, Shamir garnered widespread acclaim for his verité film Checkpoint, which assessed the impact of border-control posts in the Israeli-occupied territories, both on the Israeli soldiers who manned them and on the Palestinians forced to pass through them. His superb 5 Days observed Israel's 2005 pullout from Gaza with approval — and with sympathy for the anguish of both the evicted settlers and the soldiers, whose orders were to remove resisters bodily from their homes.

Asked by a Sundance Film Festival audience member how he felt about the pullout, Shamir answered wryly, "As a peacenik, I was glad things went smoothly. As a filmmaker, I was hoping for more trouble."

Shamir instinctively goes where the drama is, but he also has a gadfly's sharp radar for the gap between rhetoric and reality. When he presses ADL staffers for evidence to back up their claims of a sharp spike in North American anti-Semitism in 2007, they can offer only wan transgressions — letters from employees denied time off for a Jewish holiday, or people offended by a cop's incautious use of the word "Jew" — that hardly stack up compared with the Holocaust, which is repeatedly invoked by ADL officials as something that could happen again anytime, anywhere.

In the Brooklyn neighborhood of Crown Heights, where tensions between blacks and Jews flared into a serious 1991 riot, Shamir finds Jewish residents on one side who are fearful for their safety, and blacks on the other who recommend a thorough read of the notorious anti-Jewish pamphlet The Protocols of the Elders of Zion. But he also finds an Orthodox rabbi who notes that when a black person robs a Jew, the crime isn't necessarily an anti-Semitic one. The rabbi ventures further that the hypervigilance of the ADL inflames already volatile relations between Jews and blacks.

Indeed, Shamir finds far more sensitivity to anti-Semitism among secular Jews than among their religious counterparts, both in the United States and in Israel. Accompanying Israeli teenagers on a school trip to concentration camps in Poland, Shamir watches as their teachers, guides and a zealous security detail whip up fears of rampant neo-Nazism among their charges. One student, hilariously, comes away from an encounter with elderly Polish locals (who speak not a word of English) with the firm conviction that they've called her a "monkey" and a "donkey."

If Shamir is gifted with an anthropologist's openness to complication, he also has a contrarian's impish appetite for the opposing argument, the more intemperately expressed the better. The leftist Israeli publisher Uri Avnery assures him that anti-Semitism in America is "a Jewish invention," while Norman Finkelstein — a professor and son of Holocaust survivors who argues in his controversial book The Holocaust Industry that Israel and its supporters play the Shoah card to justify the oppression of the Palestinians — denounces Foxman as a "thug and a hoodlum."

That's a lot further than the mild-mannered Shamir is willing to go. He airs without comment the view, expressed by Foxman's companions on a trip to a concentration camp, that the Holocaust could happen again anytime. But he's enough of a polemicist to question Foxman's equation of anti-Zionism with anti-Semitism. And he's shocked that American scholars Stephen M. Walt and John Mearsheimer have been labeled as anti-Semites for suggesting that the influence of pro-Israel lobbyists — the ADL prominent among them — is good for neither Israel nor the United States. (Walt and Mearsheimer have argued, among other things, that the Iraq war was "due in large part" to the influence of pro-Israel groups on the Bush administration.)

No doubt Shamir will be accused of claiming that anti-Semitism is dead. He doesn't, but the ambiguities in the title of Defamation suggest that, in an age of viral and often inaccurate media messaging, we have lost the capacity to distinguish between degrees of evil — between systematic racism and the minor slights that are the price we pay for living in democracies.

Shamir means to liberate Israelis and Diaspora Jews from the defensive crouch they inherited from the Shoah, an admirable goal he undermines only slightly when he suggests that Jews and Israelis "normalize" themselves by looking more to the present and the future than the past. Neglecting the lessons of the past may be throwing out the baby with the bath water, but it's hard to argue with Shamir's gentlemanly hint that when talking about anti-Semitism, shades of gray apply.

An earlier version of this review made reference to "Polish concentration camps." The camps in question, while located within Poland, were established and operated by occupying forces as part of Nazi Germany's systematic genocide targeting European Jews.