Accessibility links
Movie Review - Almodovar's 'Broken Embraces' - The Very Picture Of Romance Brace yourself: Things are about to get meta. Pedro Almodovar's latest picture strings a colorfully knotty love story across layers of dark film-within-a-film intrigue. Complex of plot, deft in its blending of comedy and melodrama, and a treasure trove of golden-age movie references, the film is what you might call a lushly tragic lark — a heartfelt, if not quite heartbreaking, paean to romance and to the romance of cinema. (Recommended) 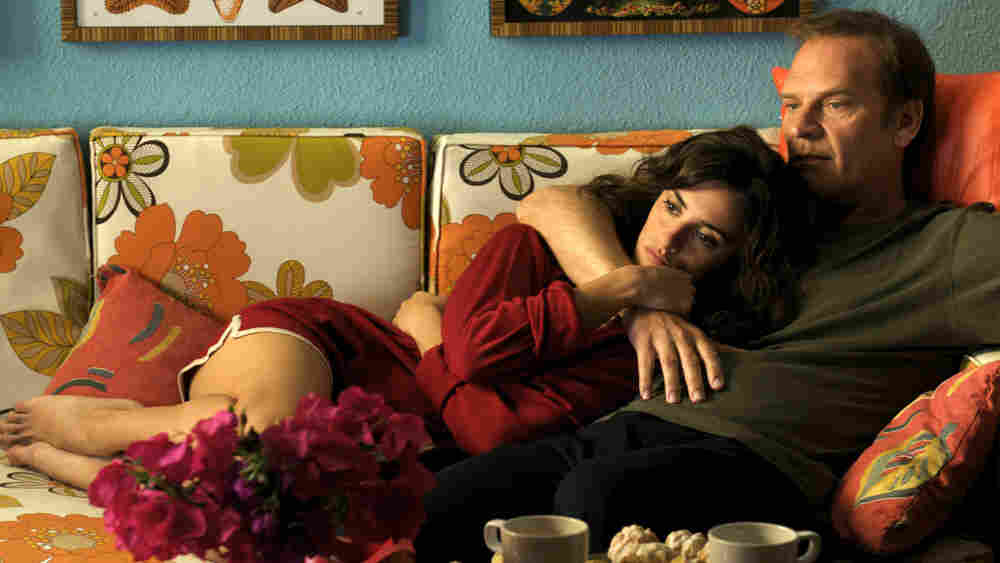 In Spanish with English subtitles

Even if Pedro Almodovar's Broken Embraces weren't ravishingly shot and passionate about everything from filmmaking to passion itself, you'd still have to marvel at its formal ingenuity as a faux cine-a-clef about a film director and his muse — starring Almodovar's current muse, Penelope Cruz. Complex of plot, deft in its blending of comedy and melodrama, and a treasure trove of golden-age movie references, the film is what you might term a lushly tragic lark — a heartfelt, if not quite heartbreaking, paean to romance and to the romance of cinema.

The story centers on screenwriter-turned-director Mateo Blanco (Lluis Homar) who, after an accidental blinding that ends his directing career, answers only to his screenwriting pen name: Harry Caine. In flashbacks, we learn how Mateo encountered the love of his life, Lena (Cruz), when she was a wealthy industrialist's mistress, auditioning for a role in Mateo's first comedy, Chicas y Maletas (Girls and Suitcases). She's not remotely happy with the industrialist, so acting perhaps comes naturally to her. Anyway, Mateo sees a spark, and using a fresh face fits with his plans for a breakout from his earlier films.

So she gets the part, and her indulgent but jealous tycoon agrees to finance the film, while also employing his pathetic teenage son to make a behind-the-scenes documentary, so he can view dailies daily and keep an eye on Lena. During the shoot, the lad develops a crush on Mateo, Mateo falls for Lena, and complications ensue when the tycoon becomes violent and the violence finds its way into the comedy's script.

If that sounds complicated, rest assured that I'm simplifying; the story of the film-within-a-film (and the filmmaking-about-filmmaking on the set of that film) is wrapped into a decade-later story featuring the now-blind Mateo/Harry, his protective longtime manager (Blanca Portillo) and her screenwriter-wannabe son (Tamar Novas), who reads and transcribes for Mateo when they're not collaborating on a nifty little vampires-running-a-blood-bank script. (Which sounds like exactly the sort of larky if less ambitious project Almodovar would have delighted in making a decade or so ago.)

Shot in vibrant hues — primary colors and geometric shapes for the film-within-a-film; darkly lurid washes for the rest — Broken Embraces begins with a rush of melodramatic incident, then slackens somewhat as the various storylines play out. Never less than engaging, the film nonetheless feels more thought-through than emotionally felt on occasion, especially once Mateo and Lena flee the close confines of movie sets and claustrophobic relationships to embark on a trek through Lanzarote, a breathtaking volcanic wasteland. The thrust gets lost in those wide-open spaces, as Almodovar's screenplay indulges in jokes — a cry of "Harry Caine, Harry Caine" on a particularly windswept beach, for instance — even as it's careening toward its emotional climax.

That said, there's plenty to savor along the way. Homar may not be the most charismatic of leading men (though he has a high old time using his character's blindness as a tool of seduction in the opening scene), but the other performances are showy and amusing. Cineastes will recognize scenes from Chicas y Maletas as riffs on Almodovar's own breakout comedy, Women on the Verge of a Nervous Breakdown, and there are many other cinematic references — to Michael Powell's Peeping Tom, to films by Bunuel and Rossellini, to the look of the young Audrey Hepburn.

All of which keeps the cinematic pot boiling, as Cruz lends an alternatingly sparkling and sad-eyed radiance to a character whose compromises may have made her miserable in her own skin, but who is nonetheless alluring to all comers — whether she's involved in frantic dressing-room gropery, a near-tragic staircase tumble or the unremarkable but somehow tear-inducing act of slicing tomatoes. (Recommended)