Accessibility links
College Graduates Struggle To Repay Loans The abysmal job market is making it hard for some to start making student loan payments, which come due this month for May graduates. A new law could ease the pain for some: It limits monthly payments to 15 percent of a graduate's income. 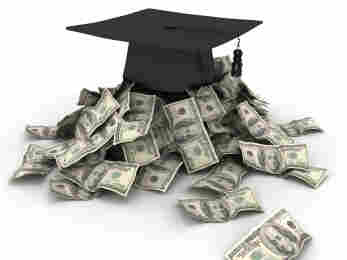 November brings a nerve-racking deadline for May's college graduates: It's time to make the first payment on their student loans.

With this year's tough job market, many graduates don't know how they'll come up with the money. Many are asking for deferments, and some may have to default.

But a new federal law designed to ease the pain of repayment may help some make it through this tough time.

Samantha Green graduated from Indiana University in May with a $50,000 debt, a degree in journalism and a burning desire to start her career in Chicago.

So far, the only job offers she has gotten are temporary or minimum-wage sales jobs.

"It's just not something that's a good fit for me," says Green, who is doing odd jobs to earn some money.

Her job prospects are so poor that her parents have been helping pay her rent, electric bills and groceries. Now they're covering her $300 monthly student loan payments, too.

"Fortunately, we have some money saved, so we're able help her," says Matt Green, Samantha's dad.

But unless she gets a job soon, he says, the new graduate might have to move back with her parents in a suburb of Boston.

"We knew the job market was tight, but we didn't expect it would take her this long to secure any kind of employment," Matt Green adds.

Student Loan Defaults On The Rise

An absolutely dismal job market has driven the student loan default rate to about 7 percent, nearly twice what it was in 2006. About a quarter of a million people who were supposed to start paying their student loans in 2007 still are not.

And that does not include 2009 or 2008 graduates, including Gregory Cendana.

It's difficult, and I feel like I shouldn't have to live paycheck to paycheck, especially with a UCLA degree.

Cendana was the first in his family to attend college, and his parents could not contribute much to his education. Even though he received the maximum amount of federal assistance, he still worked three jobs during college. He graduated from UCLA with $40,000 in loan and credit card debt.

With an annual salary of $35,000 and monthly loan payments of $350, Cendana doesn't have much left over to live on in pricey Washington, D.C. He doesn't have a car or cable TV, and buys only the "bare minimum" of food.

"It's difficult, and I feel like I shouldn't have to live paycheck to paycheck, especially with a UCLA degree," says Cendana, president of the United States Student Association.

Cendana's parents both took second jobs to help him avoid going into default.

When people do go into default, their loans are turned over to collection agencies, their wages can be garnished, the government can withhold Social Security benefits, and their credit is tarnished.

If graduates can prove that they are hardship cases, they can defer loan payments for up to three years. And since Congress passed the Income-Based Repayment Plan this summer, borrowers now can sign up for a program that will limit their payment to 15 percent of their incomes.

"It's going to be a great plan for borrowers who are in financial distress," says Mark Kantrowitz, publisher of FinAid.org, a Web site devoted to helping students find ways to pay for college. "The Income-Based Repayment Plan will prevent a lot of defaults."

Kantrowitz has a rule of thumb: Students should not borrow any more than they expect to earn right after they graduate. That's about $45,000 for the average graduate with a bachelor's degree.

That advice is not much help to Samantha Green in the Windy City. But she says she has a backup plan: applying to graduate school. Of course, that could heap on another $50,000 in loans.