Accessibility links
Movie Review - In 'Blind Side,' A Tunnel-Vision Take On A True Story Based on Michael Lewis' acclaimed book, John Lee Hancock's julep-sweet screenplay turns a well-told true story into a feel-good fantasy for white liberals — a movie that doesn't dig deep and too often seems content to trade in stereotype. But as ever in Hollywood, the based-on-reality defense will provide a certain amount of cover, and Hancock will probably have an audience pleaser on his hands. 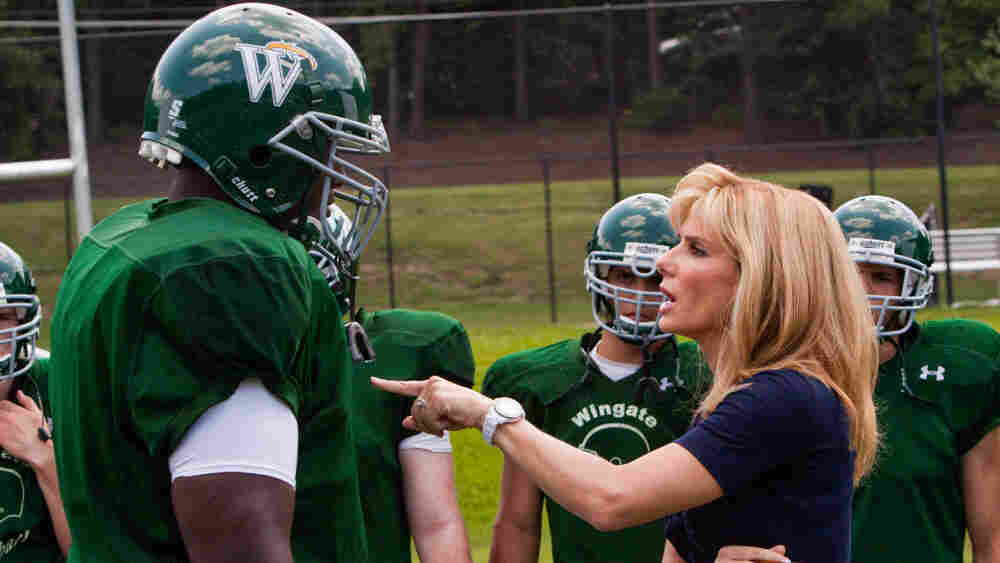 'Do You Have Anyplace To Stay Tonight?'

'Where Your Mother Lives'

'If He Gets His Grades Up'

'Does Michael Get The Family Discount?'

Two weeks after Precious opened to blockbuster grosses, along comes The Blind Side, another life-struggle chronicle centering on an uncommunicative, smart but stunted, 300-pound African-American teenager who overcomes enormous familial and social problems with the help of outsiders. Like Precious, The Blind Side features a domineering matriarch (played by an actress who's being touted as an Oscar contender), a well-known singer giving a persuasive performance in a supporting role, a concerned teacher going beyond the call of duty and a couple of supportive comic-relief buddies.

Unlike the tale told in Precious, however, The Blind Side's story is contrived, storybook sweet, credulity-straining and ... um, true.

It's based not on a novel, but on Michael Lewis' fact-based football book, The Blind Side: Evolution of a Game, roughly half of which is devoted to the rise of Michael Oher from impoverished circumstances in Memphis, Tenn., to college stardom at the University of Mississippi. (An end-credit sequence brings the story up to date: Oher was a first-round 2009 NFL draft pick for the Baltimore Ravens, where he currently plays right tackle.)

Near the start of the film, when feisty Memphis belle Leigh Anne Tuohy (Sandra Bullock) sees 16-year-old Big Mike (Quinton Aaron) wandering aimlessly in the rain after a function at the private Christian school her kids attend, she intuits that something's amiss. Her kids confirm that Big Mike attends the school, but he's essentially homeless, and when it becomes clear that he's got nowhere to spend the night, she invites him to bed down on a couch in her family's palatial manse.

The next morning, he gets up before the rest of the household, folds the sheets neatly and heads down the tree-lined driveway. But Leigh Anne, who's something of a good-cause force of nature, is not about to let him go back to wandering the streets. Instead, with the none-too-veiled racism of her affluent friends ringing in her ears, she's soon buying him clothes, installing him in his own bedroom and hiring a tutor to get his grades to a level where he can play football, a sport at which she and everyone else assumes — given Big Mike's enormous size — he'll be a natural.

Not so much, as it happens. But that just means that pint-sized, 10-year-old Tuohy son S.J. (Jae Head) can set himself up as amateur coach and get the family's newly recruited gentle giant into shape, as Mom works to make him more aggressive.

While Aaron comes across pleasantly enough as a reluctant jock, his Big Mike is almost incidental to a story that's framed less around him than around the family that adopts him (literally) and pushes him to succeed. The Blind Side is chiefly tailored as a vehicle for Bullock, whose hard-charging Leigh Anne is shown off, admired and allowed to walk off with almost every scene. At once irrepressibly sunny and pushy enough to seem a royal pain — and so fiercely implacable in defense of her young ward that you entirely understand why everyone from drug dealers to football coaches to country-club matrons would back down in her presence — she's the reason the story remains as engaging as it does on-screen.

Lest she seem too much of a pill, she's met everywhere by smiles, smiles and more smiles. Country-music star Tim McGraw is fine as Leigh Anne's affably acquiescent hubby, as is Ray McKinnon as an affably flustered football coach. Kathy Bates' affably liberal good-ol'-girl tutor has her moments, especially one in which she admits to being a closet Democrat. And Adriane Lenox makes a quick impression as Big Mike's neglectful but loving mom, one of the few characters depicted as not having much reason to be relentlessly upbeat.

John Lee Hancock's julep-sweet screenplay pretty much turns the book's measured account of Oher's story into a feel-good fantasy for white liberals. The film doesn't spend much time delving into big-picture questions, and it's content to trade in stereotypes when the camera wanders to the less affluent side of the Tennessee tracks.

But as ever in Hollywood, the based-on-a-true-story defense will probably provide a certain amount of cover. Hancock's only aiming for a crowd pleaser, and by not challenging the established playbook for inspirational sports dramas, he's no doubt got one.