Accessibility links
China's Newest Export: Punk Rock America is used to exporting its culture. It's called soft power, this ability to dominate the tastes of people in other countries. So it's not such a big deal for an American band to tour in China. But a Chinese rock band taking the stage in New York? That's new. 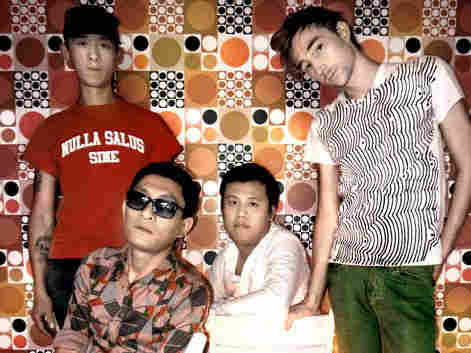 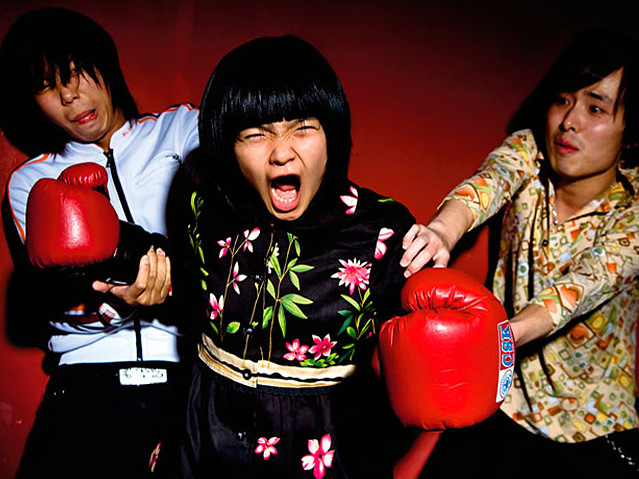 America is used to exporting its culture. It's called soft power, this ability to dominate the tastes of people in other countries. So an American band touring in China isn't such a big deal. But a Chinese rock band taking the stage in New York?

That's new. Everything about China's emerging rock scene is new — except for its inspiration. And one of the biggest rock bands in China right now has decidedly old-school roots.

The members of P.K. 14 are lost in Williamsburg, a Brooklyn neighborhood. They're searching for a store that sells used musical equipment. Lead singer Yang Hai Song doesn't stand out at all here, what with his tight peacoat, black skinny jeans and black framed glasses. Inside Main Drag Music, the band is trying to pick an amplifier for the night's show. They ask the clerk how each one is different. The floors are crowded with amplifiers, the musicians' eyes are wide, and they're giggling madly. The amp they like is bright orange, manufactured by the Orange Music Electronic Company.

The '60s is widely considered the heyday of rock 'n' roll in the West. Yang says that Beijing's rock-music development is in its own " '70s" now. There isn't much to look back on.

Yang is 36. He's restless, jerky, like a character in a silent movie — constantly smoking and jumping about.

"When we were growing up," he says, "everything's changing very fast. End of the Cultural Revolution and beginning of the economy revolution. It's like, you think of the McDonald's, it's exist[ed] a long time ... Actually, no. Actually, it exists a very short time. Past 20 years, it's crazy in China. It's chaos."

Yang grew up in Nanjing — a city west of coastal Shanghai. He dropped out of school, where he was studying to be an engineer.

"At that time, I start to listen to rock music," he says. "I think that's the reason."

Yes, the reason he dropped out of school is because he listened to rock. And, yes, his parents were horrified. He and the other would-be rockers in Nanjing found each other.

I ask Yang how "rock n' roll" — how rebellious — they really were back then. Remember, this is post-Tiananmen Square.

"If you choose to be a rock musician, it's an attitude; you know, the lifestyle's quite different," Yang says. "You don't need to say anything. Just the attitude is like that; [the] lifestyle is like that. Just listening to the rock music — that's a rebellion."

It's showtime at Glasslands, one of many places to see live music in Brooklyn. Back in Beijing, there are few major rock clubs. But there is a place called D-22, a 3-year-old dive bar in the university district. It's got dark red, chipped walls, and a messy, rude aesthetic. Opened by Westerners who craved a proper punk setting for the punk bands they were hearing, it's been called Beijing's CBGB. The club recently started a label, Maybe Mars. It's one of the few indie-rock record labels in the whole country. Xiao He, Carsick Cars and P.K. 14 are its stars. And that's who's playing at Glasslands on this night. The question is: Who shows up?

Answer: The place is packed. Standing in line is Vida Engstrand.

"Earlier tonight, when I was hanging out in a pizzeria in Williamsburg, [I was] telling the other people about which show we were going to," she says. "They were very jealous, because they were going to a slightly less cool show at Death By Audio, so I won tonight."

P.K. 14 kills. Yang grabs the mic stand like Elvis, and screams into it like Johnny Rotten. The Williamsburg crowd is cheering. After the show, Yang immediately heads outside to smoke.

"When we just form[ed] the band ... you never dream, like, 'Yeah, I'm gonna play outside of China,' " Yang says. "Even I cannot dream I can play on the stage. Just play by myself, try to learn some songs from Bob Dylan, Woody Guthrie, but it's like the dream, you know. Step by step. And now, finally, we play New York. It's, like, surreal."