Accessibility links
Panel: Begin Mammograms At 50, Not 40 Newly revised recommendations from a prominent health task force say most women under 50 don't need routine mammograms. New research shows the benefits are small for women 40 to 49, and don't outweigh the downsides. 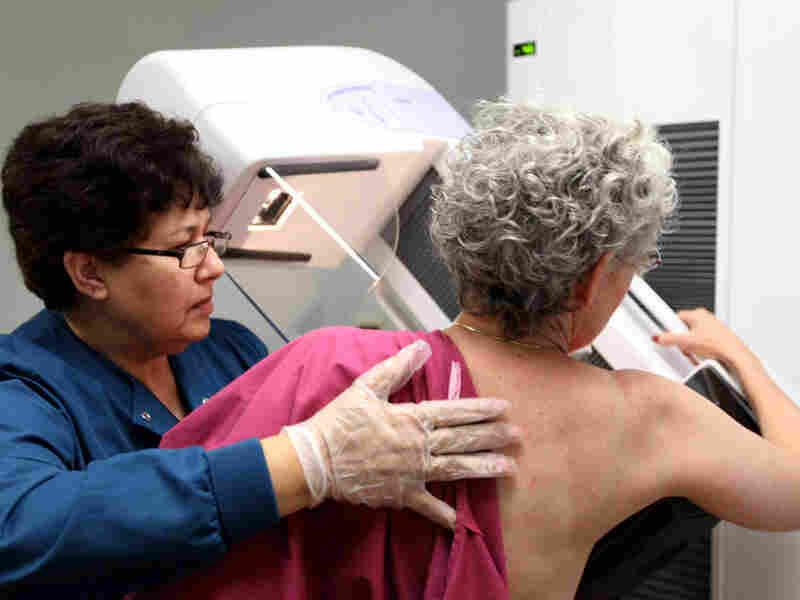 A 65-year-old patient gets a mammogram in Evanston, Ill., earlier this year. Chicago Tribune via Reuters hide caption 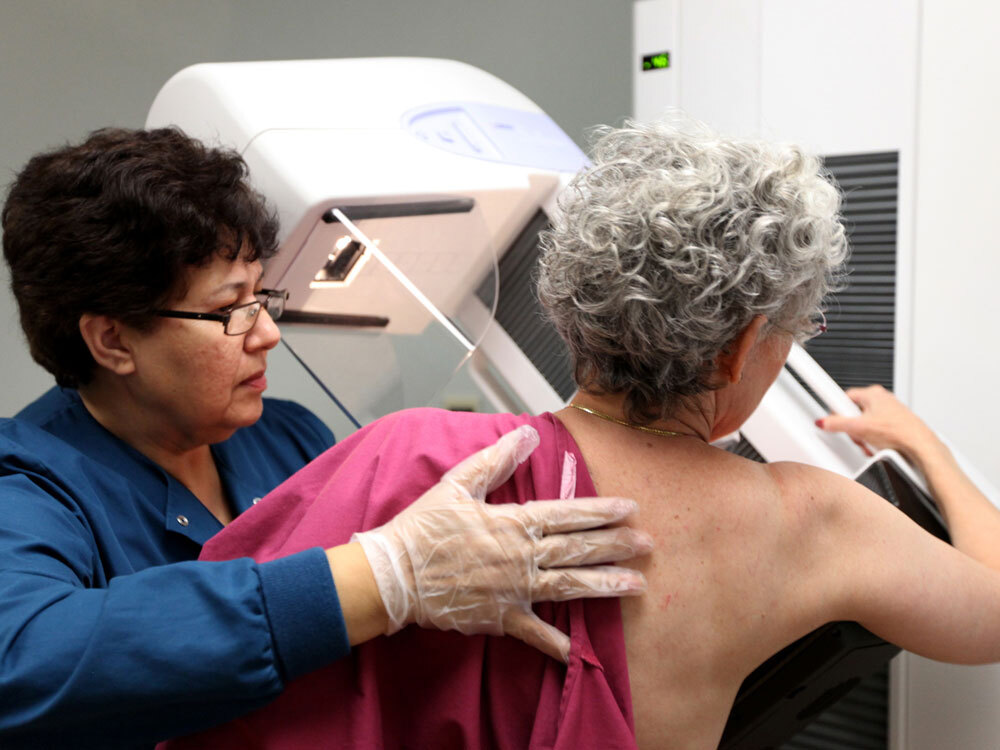 A 65-year-old patient gets a mammogram in Evanston, Ill., earlier this year.

In something of a reversal, the U.S. Preventive Services Task Force recommended that the average woman wait until age 50 to begin routine screening for breast cancer, and only get screened every two years. The previous recommendations — in place since 2002 and backed by the American Cancer Society, radiologists and health professionals — said women should begin routine screening at age 40. Now, to the consternation of some in those groups, the task force says the overall benefit of screening women aged 40 to 49 doesn't outweigh the risks.

The new guidelines also say that women need not perform breast self-examinations. Some studies find that they lead to more mammograms and biopsies that haven't been shown to have any benefit. Additionally, mammography screening of women older than 75 is not considered necessary, since those women may be diagnosed with a cancer that is unlikely to cause a problem in their lifetime.

Until now, the independent voluntary task force funded by the Department of Health and Human Services recommended mammography every one to two years for women aged 40 or older. The U.S. Preventive Services Task Force now advises against routine screening mammography in women between the ages of 40 and 49, saying the benefits are small, and the screenings could do harm.

* Note these recommendations are intended for those who do not have signs or symptoms, or family history of breast cancer.

More On The Recommendations:

— No more breast self-exams. The recent analysis found no evidence that self- or clinical examination reduces breast cancer death rates.

— More evidence is needed on whether mammography is beneficial after age 74.

— Not enough information to know whether newer types of mammography or magnetic resonance imaging are any better than regular film mammography results.

— Since the last recommendation in 2002, the task force has evaluated new studies on the three types of breast cancer screening, as well as commissioning research with computer-simulation models. That research compared the expected health outcomes of mammography screening at different ages and frequencies (every year or every two years).

— For women aged 50 and older, having a mammogram is associated with lower odds of dying of breast cancer.

— However, the analysis found that for women aged 40 to 49, the benefits were small, and not necessarily worth the risk. Mammogram screenings could have potentially harmful effects, including false-positive results that could lead to unnecessary procedures. Additionally, some results can lead to a diagnosis and treatment of cancer that never would have surfaced on its own within a woman's natural lifetime.

These guidelines are not for women who have a higher risk of breast cancer, says task force Vice Chairwoman Diane Petitti. Mammograms shouldn't be done without doctors fully informing women of the benefits and risks, she says. It's a conversation that they need to have before they make the decision.

The task force looked at a number of recent studies done in the United Kingdom, Sweden and at six cancer centers here in the United States, all of which achieved about the same result. They found that the deaths from breast cancer were reduced by about 15 percent for women who start screening both at age 40 and 50. But cases of breast cancer rise with age.

Women who start at 40, however, are much more likely to experience the anxiety of an abnormal mammogram, which suggests a woman might have cancer when she doesn't, and have to have additional screening. She may have to undergo a biopsy and not have cancer, or she could be overdiagnosed and have a tumor that never harms her.

"If saving lives is the only goal, then doing more screening will save more lives," says Jeanne Mandelblatt, of Georgetown University, the lead author of the modeling conducted by the cancer centers. A larger societal goal that has to be considered, she says, is whether the cost of saving lives is worth the harm caused.

It's a risk that the American Cancer Society's Terry Fontham is willing to live with. She has had an abnormal breast mammogram and had to be screened again. "Breast cancer is the most commonly diagnosed cancer in women. It's the No. 2 [cancer] killer," Fontham says. "Despite the increased anxiety, the bottom line is saving lives."

Women in the United States are being diagnosed with breast cancer earlier than their mothers were, as well as women in certain minority groups, says American College of Radiology chairwoman Dr. Constance Lehman. "Black women in the U.S. develop breast cancer at a significantly younger age than Caucasian women do." This was not addressed or acknowledged by the task force, she says.

Some groups and experts welcome the task force guidelines, including the American Academy of Family Physicians.

"There are no studies that indicate that mammograms will reduce the deaths from aggressive tumors in young women. "It's not whether women under 50 get breast cancer. They do," says Dr. Susan Love, an author and UCLA clinical professor of surgery.

"The question is whether mammography is the best way to find them and really change the outcome," she says. She would put more money into understanding why women develop breast cancer and in treating it.

More than half of all women between the ages of 40 to 65 get mammograms to screen for breast cancer. Mammography is considered one factor in the continuing decline of breast cancer deaths.