Accessibility links
Insurance Mandate Could Spur Walk-In Clinic Boom As it gets more difficult to see a primary care doctor, walk-in medical centers are picking up the slack. And if Congress succeeds in passing a nationwide health insurance mandate, the urgent care industry expects even more growth. 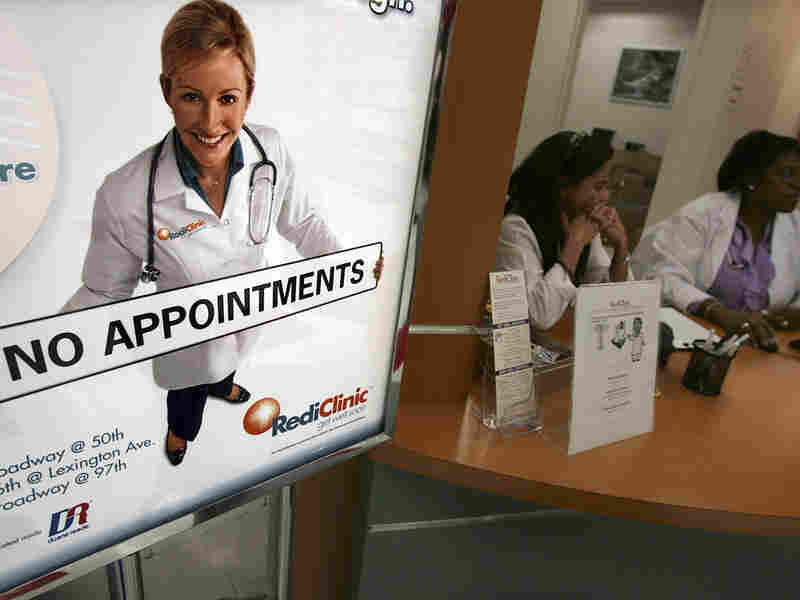 Walk-in medical centers like this RediClinic inside a New York City drugstore are increasingly treating people who either don't have a regular doctor or can't get in to see one when they need to. Spencer Platt/Getty Images hide caption 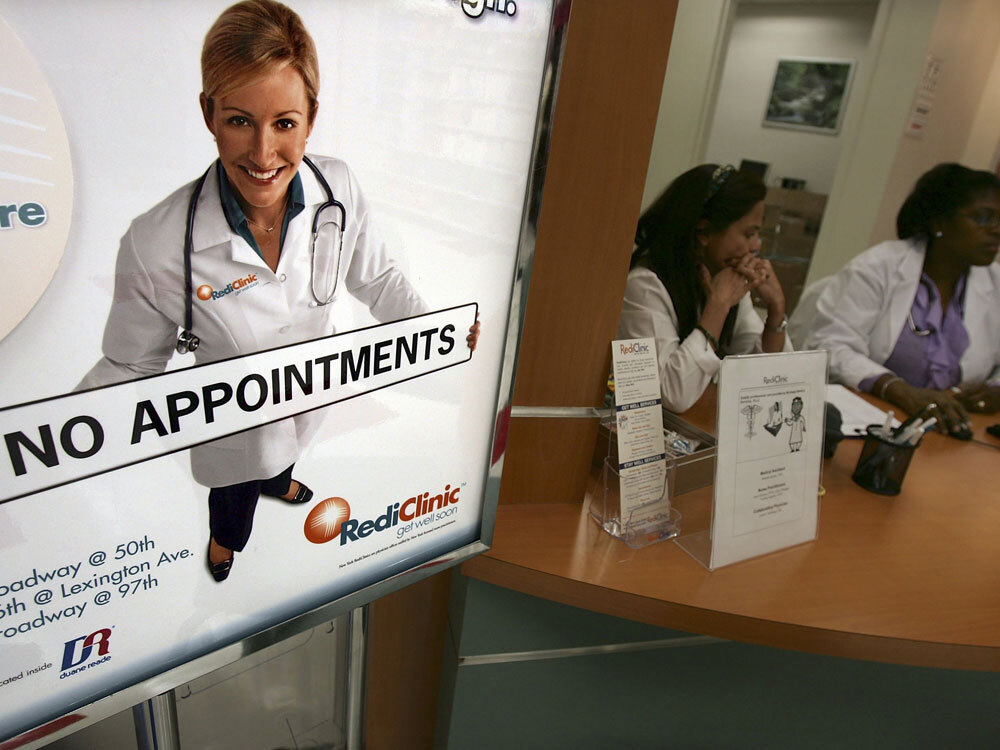 Walk-in medical centers like this RediClinic inside a New York City drugstore are increasingly treating people who either don't have a regular doctor or can't get in to see one when they need to.

As it gets more difficult to make an appointment with a primary care doctor, one business model is picking up the slack: walk-in medical centers.

Walk-in clinics — like drugstore chains that offer limited services from a nurse or stand-alone clinics operated by emergency room doctors — are increasingly treating people who either don't have a regular doctor or can't get in to see one when they need to. And if Congress succeeds in passing a nationwide health insurance mandate, the urgent care industry expects even more growth.

Recently, Denise Gagnier found herself in the Family Medical Care Center, a stand-alone urgent care clinic in Springfield, Mass. Gagnier had first gone to her primary care doctor to get checked out, but the office didn't have any appointments open.

"And they sent me here," Gagnier says.

It's Gagnier's first visit to the clinic, which is set up for minor but urgent problems like sprained ankles and strep throat — problems that people want treated quickly and that don't require a hospital setting.

There are about 8,300 urgent care centers nationwide, offering services that straddle emergency medicine and primary care.

Dr. Ira Helfand, who works at the Springfield, Mass., clinic, says most of his walk-in patients either don't have a primary care doctor or can't get in to see their doctor because of the overwhelming demand on general practices. In Massachusetts, doctors say that pressure has intensified since 2006, when the state required nearly all residents to have health insurance.

"We have a number of primary care physicians in the community who regularly use us as an escape valve for their practice," Helfand says. "They get a call from a patient who has a problem. They clearly need to be seen, but they don't have time to see them that day, so they refer them here."

Urgent care entrepreneurs are expecting this scenario to play out nationally if Congress succeeds in getting insurance coverage to most Americans.

"If there aren't enough physicians to see those folks, they're going to have to go somewhere else," Horwitz says.

And unlike primary care offices, she says urgent care clinics — which tend to refer out the most complicated cases — are ready for an onslaught.

"We're set up to take walk-ins. It's not as if our panel of patients would become full, and we can't take any more patients anymore. Urgent care doesn't work that way," Horwitz says.

In fact, as a business model, urgent care clinics rely on high volume. They are paid per patient at a rate much lower than emergency rooms, which is why Horwitz thinks urgent care centers offer one solution to rising health care costs.

"The difference between the cost of coming to us and the ER is tremendous. You multiply that over the number of visits we see per year [that] possibly would be seen in [the] ER, and you're in multiple billions of dollars pretty quickly," Horwitz says.

Of course, many doctors would rather see incentives put in place to retain and attract more people to primary care. Helfand of the Springfield clinic agrees that urgent care shouldn't replace regular checkups with a doctor who knows you — but at the moment, he says there are enough patients in line for care to fill all the waiting rooms to capacity.