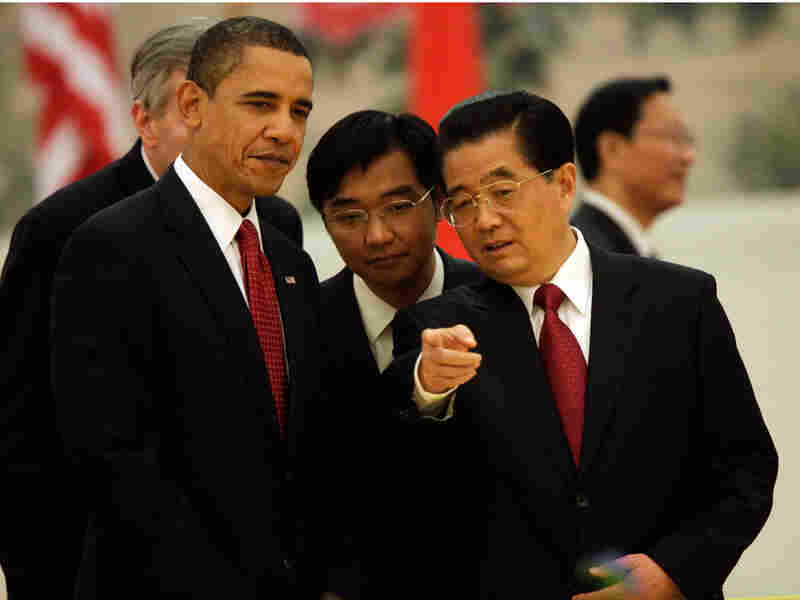 President Obama listens to Chinese President Hu Jintao as they attend a state dinner reception Tuesday at the Great Hall of the People in Beijing. Standing behind them are their translators. Pablo Martinez Monsivais/AP hide caption 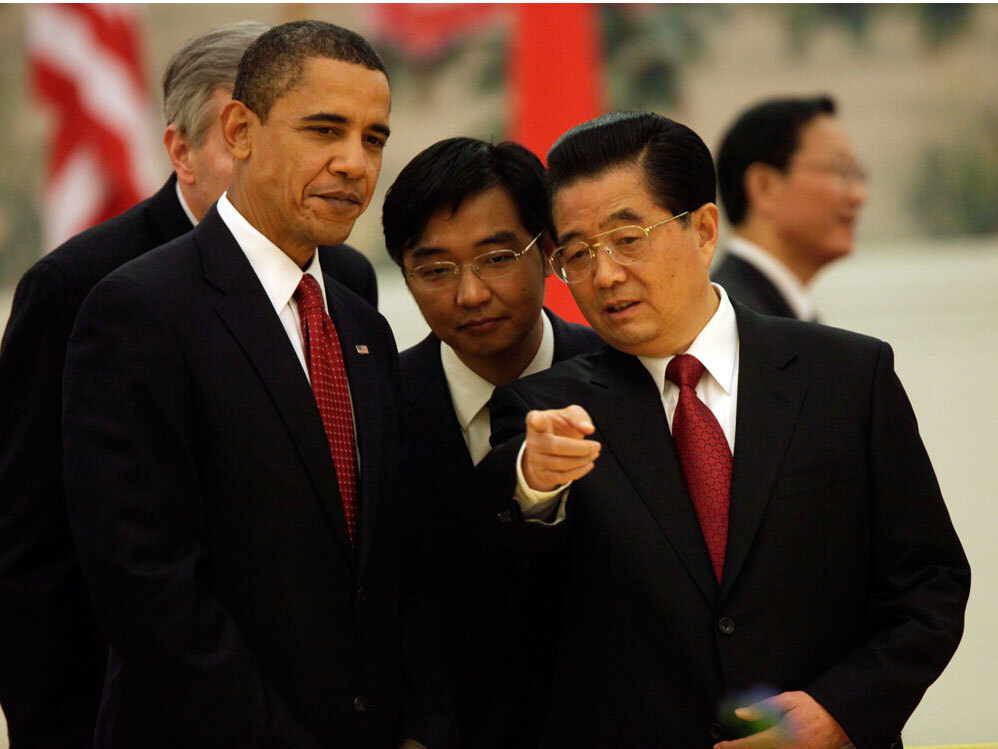 President Obama listens to Chinese President Hu Jintao as they attend a state dinner reception Tuesday at the Great Hall of the People in Beijing. Standing behind them are their translators.

After meeting Tuesday in Beijing's Great Hall of the People, President Obama and Chinese President Hu Jintao agreed to jointly tackle climate change, nuclear disarmament and other global issues, but remained apart on the sensitive issue of human rights.

After an arrival ceremony, Obama and Hu talked for several hours on a variety of global challenges. Addressing reporters afterward, the two leaders described a mostly positive meeting. The White House described the meetings as "an important first step" in building a U.S.-Sino partnership.

They spoke of moving beyond the divisiveness over human rights, trade and military tensions that have bedeviled relations in past decades.

But the U.S. president also pointedly raised the question of human rights, saying he did not believe certain principles were unique to America.

"They are universal rights and ... they should be available to all peoples, to all ethnic and religious minorities," he said in his only nationally televised remarks on the sensitive issue.

The two leaders stood side by side, but Hu still managed to avoid directly discussing the issue of human rights.

"Given our differences in national conditions, it is only normal that our two sides may disagree on some issues," Hu said through an interpreter. "What is important is to respect and accommodate each other's core issues and major concerns."

He acknowledged that "countries in today's world have become more and more interdependent" even as differences in approach exposed the limits of cooperation on some key issues.

Obama raised the subject of the Dalai Lama, the exiled Tibetan leader, directly with China's president. He also stressed Washington's commitment to human rights for all of China's ethnic and religious minorities.

At the joint appearance, Hu called on the U.S. to respect China's "core interests" — code for ending support for Taiwan and for the Dalai Lama, in his Tibetan government-in-exile. Obama obliged by saying Tibet was part of China, but he urged China to restart talks with the Dalai Lama's representatives — something Hu did not mention.

"This will lead to increased U.S. exports and jobs on the one hand, and higher living standards in China on the other," Obama said.

The two men also agreed to stop the spread of nuclear weapons in North Korea and Iran. They said Iran must show that its nuclear program is peaceful and transparent.

"Iran has an opportunity to present and demonstrate its peaceful intentions, but if it fails to take this opportunity, there will be consequences," Obama said.

Although Hu agreed on the need for Iran to climb down from its nuclear ambitions, he made no comment on the "consequences" that the U.S. president mentioned.

Jeffrey Bader of the National Security Council said the talks on Iran mean the "door is open to try to find a resolution.

"But if the Iranians do not agree, then we will turn to track two," he said. "And we expect the Chinese to be with us."

Obama said both countries were looking for a comprehensive deal that would rally the world during next month's climate change summit in Copenhagen. He said it should be an agreement with immediate operational effect, not just a political declaration.

On trade issues, Hu said that the two countries must shun protectionism. Obama called on China to relax controls that keep the Chinese currency relatively weak and thus help fuel exports — something Beijing officials have rejected in recent days.

White House aides called the meeting a success, despite the lack of a concrete agreement on some key issues.

From NPR and wire service reports.