Accessibility links
Florida Faces Drastic Change From Sea Level Rise Few places in the country are as vulnerable to sea level rise as Florida. Miami Beach, the Keys and Palm Beach are just a few of the communities that may be largely underwater if, as some are predicting, the sea level rises 3 or 4 feet over the next century. 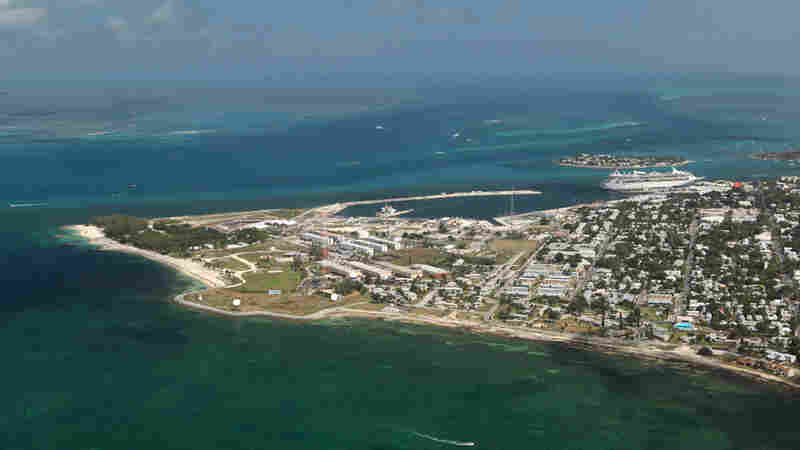 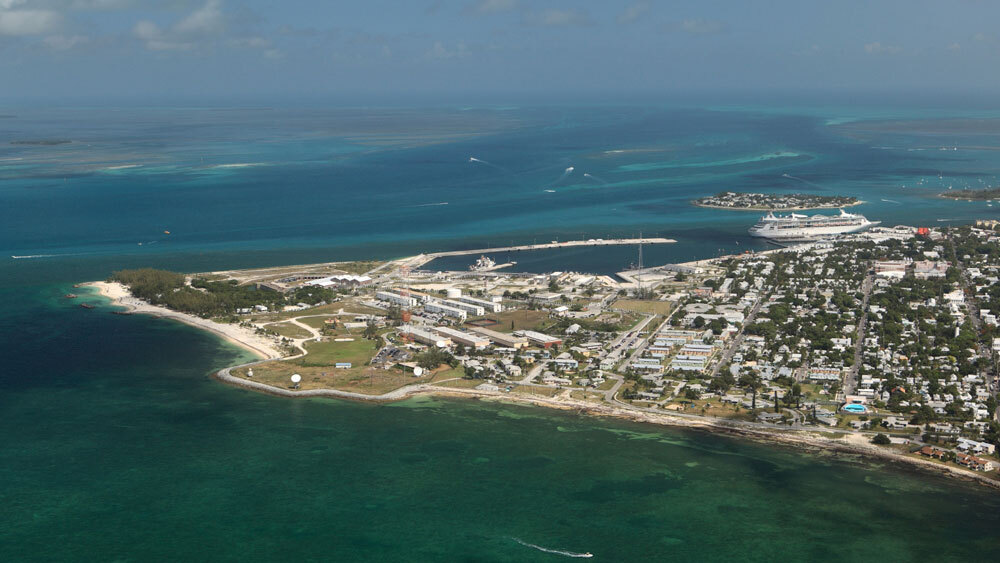 An aerial view of Ford Zachary Taylor Historic State Park and the Port of Key West.

Discussion of climate change — and what to do about it — is gaining urgency. It's being debated in Congress and is the focus of December's international summit in Copenhagen.

In South Florida, the issues of global warming and rising seas are more than theoretical. Florida is one of the parts of the country most vulnerable to a rise in sea level, and officials are beginning to plan how they'll cope with it.

Scientists say the sea level has been rising since the end of the last ice age. The concern now is how fast it's rising, and whether cities and natural ecosystems can adapt fast enough to avoid being devastated.

"You hear predictions of up to 3 or 4 feet over the next century," said Chris Bergh, of The Nature Conservancy's Florida Keys program. "It really makes you nervous for the future of this place."

With an average elevation of just 3 or 4 feet, there are few places in America where the rising sea level is a bigger threat than in the Keys.

On Big Pine Key, one of the chain's largest and most environmentally diverse islands, you can already see changes brought on by the accelerating sea level rise.

A spot not far from the island's coast used to be a pine forest. Now, it's tidal wetlands — home to a few salt-tolerant plant species and the desiccated remnants of the old forest. Bergh described some of the changes brought on by the rising sea level.

"This stump is a pine tree — was a pine tree," he said. "Now, it's an old weathered pine stump. And it's literally 100 feet or more away from the nearest living live pine. At one time, pines could live out here in what is now a mangrove marsh."

In the long run, the sea will cover the Florida Keys, no matter what we do.

At risk are more than a few pines. The Keys are home to many plants and animals that are found nowhere else in the world. The Nature Conservancy is working to develop special elevation maps for the Keys and other sensitive areas in Florida that will show which spots are most vulnerable and where action is needed to buy time for endangered ecosystems.

Bergh says it's hoped that with help, rare plants and animals may be able to migrate to higher ground before they're wiped out.

"In the long run, the sea will cover the Florida Keys, no matter what we do," said Bergh. "The question is, how long is it going to take, and are we willing to just turn our backs on all of the wildlife, plant life and human communities that live here and just take our lumps? Or, are we going to fight against it to the extent that we can?"

It's becoming increasingly clear in Florida that more than just a few islands will be affected by the rising sea level.

"It's like our map of the area vulnerable to 27 inches of sea level rise looks like someone took a razor to the state right above Miami and sliced off everything below that," said Frank Ackerman, a senior economist at the Stockholm Environment Institute, who has studied what impact climate change — and sea level rise — will have on Florida. His model calls for a sea level rise of just over 2 feet by 2060.

Under that scenario, Ackerman says Florida stands to lose almost 10 percent of its land area and the homes of 1.5 million people.

"The zone that's vulnerable to 27 inches turns out to include a whole lot of buildings that people would probably rather save," said Ackerman. "There's residential real estate worth $130 billion in that, half of Florida's beaches, two nuclear reactors, three prisons, 37 nursing homes, and on and on."

Ackerman has added up the impact that more powerful hurricanes, higher average temperatures and declining tourism will have on Florida. He says the cost of inaction — doing nothing to slow climate change and sea level rise — would add up to $345 billion, or 5 percent of Florida's total income, by 2100.

In South Florida, Miami-Dade County set up a task force to look at the issue. It's adopted some recommendations, such as greater use of hybrids, for example, but so far has shied away from tough decisions on zoning and development.

That worries Hal Wanless, chairman of the Geological Sciences department at the University of Miami and an adviser to the county on sea level rise.

In his office at the university, he brings up a map on his computer showing the impact a 5-foot sea level rise would have on South Florida. Miami Beach and nearly all of the Keys are gone. Most of Miami-Dade County and much of Broward County are underwater.

"And it's going to just become increasingly risky to live in a place like Florida. Our roads are going to have to be elevated," he said. "On this map, basically, Miami is an island."

In South Florida, keeping the sea at bay through the use of levees and pumps, along the lines of New Orleans or the Netherlands, is not really an option. This is a metropolitan region built on porous limestone that readily allows rainwater to soak in. Conversely, Wanless says, it also readily allows a rising water table to percolate up to the surface.

Representatives of South Florida's four counties recently met and agreed to work together on strategies to cope with climate change and sea level rise. Miami-Dade County Commissioner Katy Sorenson says that so far, communities have mostly focused on what they can do to stop contributing to global warming. Now, she says, it's time to begin thinking about how cities will adapt to the coming changes.

And the concerns are not just in South Florida. The Army Corps of Engineers recently published guidance for its staff members, directing them to consider the impact a rise in sea level will have on all corps projects nationwide.