Accessibility links
At Gaza Zoo, The Wild Things Return Almost a year after Israel's offensive against Hamas militants in the Gaza Strip, the coastal enclave is still struggling to recover. Most animals at the Gaza Zoo died during the fighting. Now, with the help of animal smugglers, the zoo is trying to rebuild. 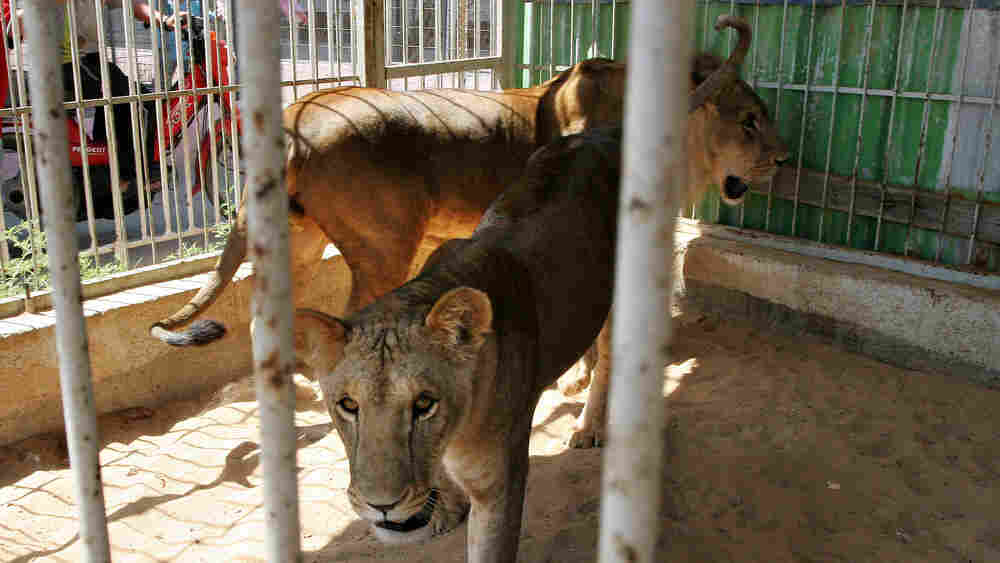 Lioness Sabrina (foreground) walks in her pen at the Gaza Zoo with her brother, Sakher, in 2007. The two lions are among the few animals at the zoo that survived the Israeli offensive against Hamas militants nearly a year ago. Hatem Moussa/AP hide caption 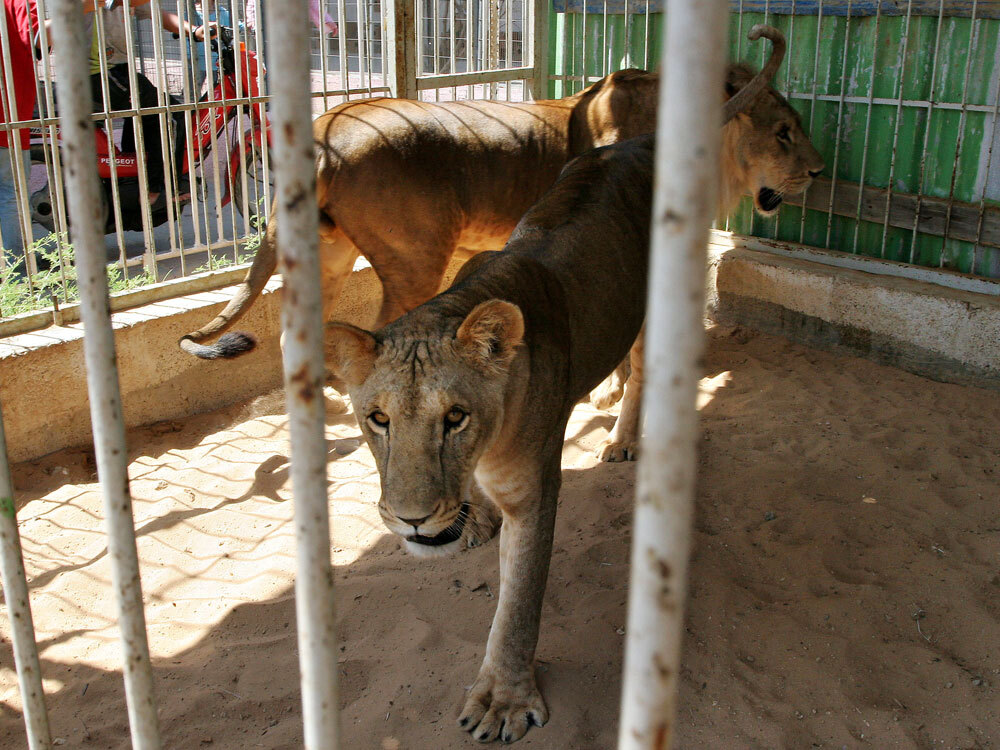 Lioness Sabrina (foreground) walks in her pen at the Gaza Zoo with her brother, Sakher, in 2007. The two lions are among the few animals at the zoo that survived the Israeli offensive against Hamas militants nearly a year ago.

Almost a year after Israel's offensive against Hamas militants in the Gaza Strip, the coastal enclave is still struggling to recover. One place that was hard hit during the war is the Gaza Zoo, where most of the animals were killed or died during the fighting.

The zoo's two lions, Sabrina and Sakher, still don't like to come near the bars of their cage. It has been nearly 10 months since the shooting stopped, but people and loud noises make them skittish.

Still, on a recent afternoon, children crowd around gaping at the exotic pair.

"This was the best zoo in all of Gaza," says Emad Qassim, director of the Gaza Zoo.

But then the war started, and the gunfire and missiles hit the zoo.

"Many animals died that way. Those that survived ate each other. We couldn't get here during the fighting. After 22 days, we were very shocked and sad when we finally entered the zoo," Qassim says.

What greeted them was horrific, he says.

Fewer than a dozen of the zoo's 200 animals survived. Rotting carcasses were everywhere.

During the war, the Israeli army released footage that it said showed that the zoo had been booby-trapped by militants. Qassim denies that, saying the zoo was a civilian institution that was unfairly targeted.

Israel launched its air and ground offensive last December in response to years of rocket and mortar fire from Gaza into southern Israel. About 1,400 Palestinians were killed in the war, which ended on Jan. 18.

Both sides acknowledge that there was fighting in the area of the zoo. The two lions, though, were lucky.

"The lions escaped. And when we came to the zoo, we were looking around and we found them in the bathrooms in the office building," Qassim says.

The doors had slammed behind them, and they were locked inside.

"We tried to give them food, but they didn't want any. They could barely drink, they were so emaciated. It took a month to rehabilitate them, and even then they were only eating one-tenth of what they ate before," Qassim says.

Qassim says Sabrina is no stranger to adversity. In 2005, she was kidnapped by a clan of bandits and was only rescued by Hamas fighters in 2007. She had been physically mistreated, and her captors were charging people to have their photographs taken with her.

These days, the lions are the central attraction as the zoo tries to rebuild. Qassim says the zoo suffered $200,000 in losses.

"We are facing a huge financial problem now. It's costing an enormous amount to replace the animals," he says.

The zoo already has baboons, ostriches and monkeys. But there are many empty cages; some pens have cats and dogs in them.

Israel maintains tight restrictions on what can be shipped into the Gaza Strip. The new animals are being brought into Gaza through a network of illicit tunnels that have sprung up on the border with Egypt for smuggling everything from household goods to weapons.

Qassim says the zoo puts in an order, and the smugglers take care of finding the animals. The baboons came from Alexandria, Egypt. Zoo staff are waiting for a bear, which is coming from Libya.

"The smugglers are very professional. The wild animals, for example, are put in a locked cage, and they transport them through the tunnels like that so they are safe. Some of the tunnels are very large, and animals like camels can walk through without difficulty," he says.

Qassim says he desperately needs the help of the international community to make the zoo into what it once was.

There are so few things to entertain children in Gaza, he says.