Accessibility links
When Football's Deadly Brutality Outraged America In just one season 100 years ago, 26 players died from injuries sustained in football games. The deaths sparked a national outcry and forced the new collegiate athletic association to take action to make the sport safer. 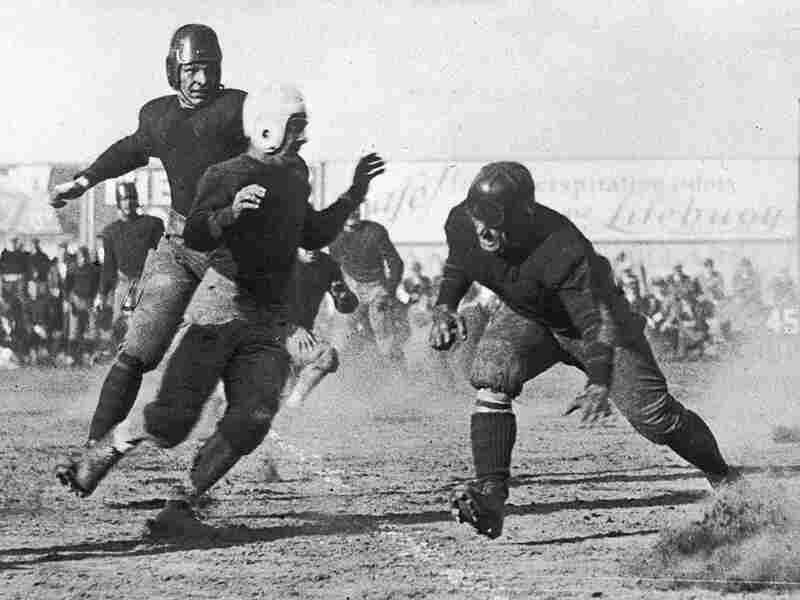 Before ESPN: Football has always been a contact sport — even in the 1930s, when this photo of players for Boston and Geneva College was taken. Hulton Archive/Getty Images hide caption 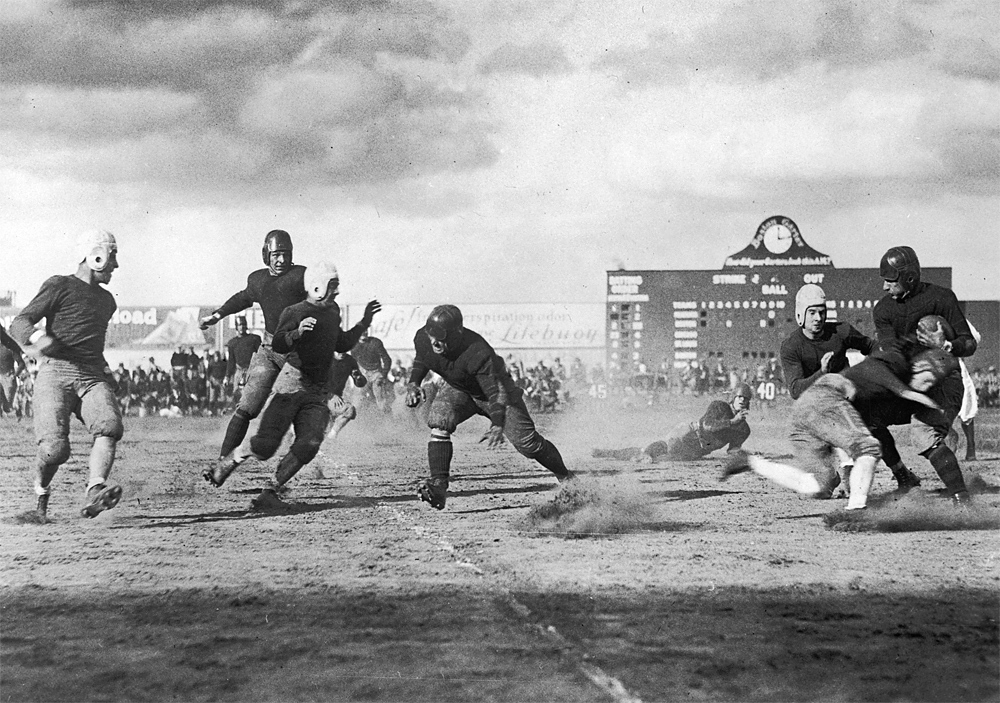 Before ESPN: Football has always been a contact sport — even in the 1930s, when this photo of players for Boston and Geneva College was taken.

This month is the centennial of what has all but been forgotten — a moment that could have ended football in America but instead forced the sport down a different, better path.

Football was so gruesome at the turn of the century that in 1905, no less than President Roosevelt himself demanded that the sport clean itself up, and the notorious flying wedge was banned.

However, by ought-nine, as they said back then, it was still a brutal battle royal. In the season's championship match — what may be called the first "game of the century" — The New York Times summed it up as "an indescribable tangle of bodies, arms and legs."

That game, on Nov. 20, between two undefeateds — Yale and Harvard — was typical of the era. There were no touchdowns. In fact, when Yale won 8-0, it finished its whole season completely unscored upon.

The forward pass had been legalized, in a limited fashion — but football was mostly just pounding scrimmage. Few players wore helmets, and a close observer declared that as Harvard and Yale pummeled each other, "It was the most magnificent sight ... every lineman's face was dripping with blood."

The old warrior called football a 'barbarous amusement' that 'develops the brute dormant in man's nature and puts the player on a level with ... a polar bear.'

But the great game of a hundred years ago was overshadowed by greater carnage at other major universities. Three weeks before, when Harvard played at West Point, an Army lineman named Eugene Byrne was killed. Then, two Saturdays after that, against Georgetown, in the nation's capital, star University of Virginia halfback Archer Christian met his death.

The Chicago Tribune reported that 26 players had been killed on the gridiron that year. How long would America allow its brave youth to perish for a silly game?

The president of Stanford, disgusted, called football "rugby's American pervert," and an even more fascinating critic was Col. John Mosby, who as the fabled Confederate "Gray Ghost" had certainly seen more than his share of death and mayhem during the Civil War.

The old warrior called football a "barbarous amusement" that "develops the brute dormant in man's nature and puts the player on a level with ... a polar bear."

In the face of such withering widespread criticism, the country's new collegiate athletic association was forced to find ways to reduce football's dangers.

Although some of the game's powers — not unlike the smug football aristocracy in the Bowl Championship Series today — were relatively content with the gory status quo, other colleges were more progressive.

Rules liberalizing the forward pass were instituted for the 1910 season, and soon it became the weapon that opened up a safer game.

Of course, some things never change for the better. Canny old Col. Mosby also made this point: "It is notorious that football teams are largely composed of professional mercenaries who are hired to advertise colleges. Gate money is the valuable consideration."

The Gray Ghost wrote that exactly a century ago, and though the NCAA could clean up the game on the field, it never has figured out how to manage the other abuses.