Accessibility links
Reef Conservation Strategy Backfires Conservationists worried about overfishing on the Pacific island of Kiribati persuaded fishermen to pick coconuts instead. The strategy backfired: Coconut oil production increased, but so did fishing. It turns out, fishermen who earned more money in coconut agriculture had more leisure time — which they spent fishing. 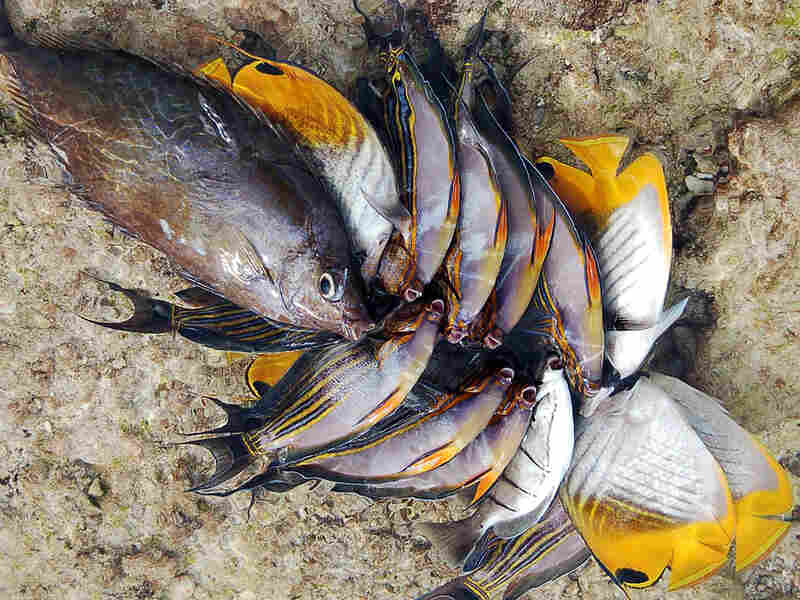 A day's catch on the Pacific island of Kiribati. Conservationists tried to prevent overfishing on the island by encouraging fishermen to do something else. Sheila Walsh hide caption 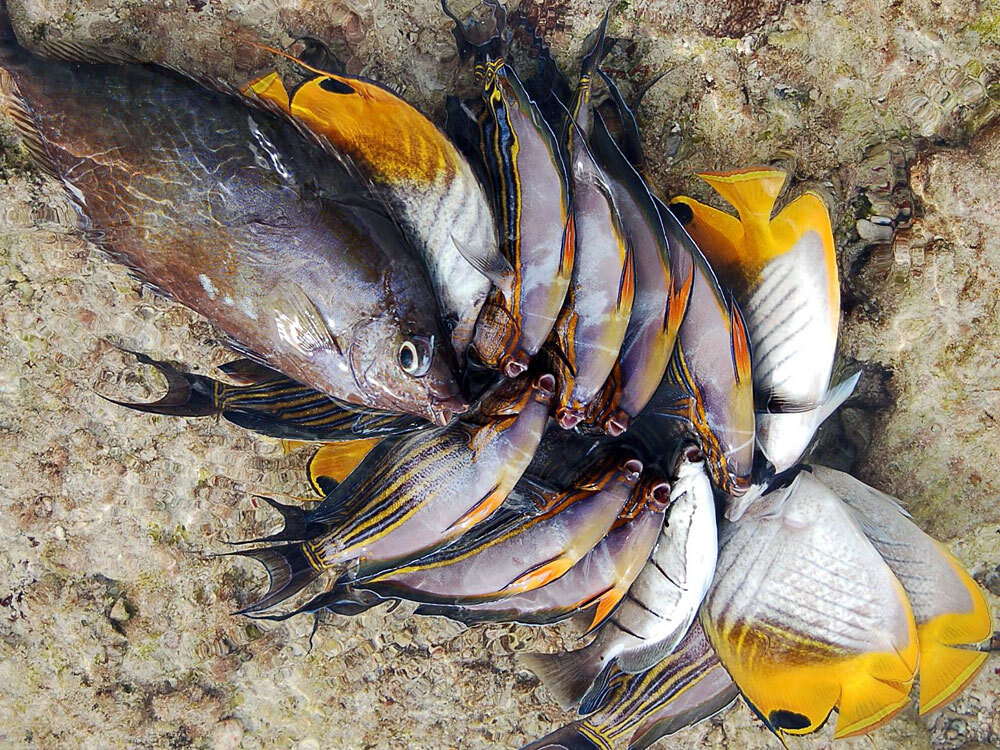 A day's catch on the Pacific island of Kiribati. Conservationists tried to prevent overfishing on the island by encouraging fishermen to do something else.

Aid organizations concerned about overfishing on tropical reefs often try to encourage fishermen out of their boats by offering them better-paying jobs on shore. But this strategy actually may make matters worse.

Take, for example, the story of Kiribati, an island nation in the central Pacific. Kiribati (pronounced KIR-a-bahs) has a simple economy. People either catch fish, or they pick coconuts from their trees and produce coconut oil. Sheila Walsh, a postdoctoral researcher at Brown University, says most people do a bit of each.

The Kiribati government was concerned about overfishing. So it came up with a plan: It would subsidize the coconut oil industry.

"The thought was that by paying people more to do coconut agriculture, they would do less fishing," says Walsh. "And this would fulfill two goals: One, they would reduce overfishing; and two, people would be better off. They would have higher incomes."

It hit us like a bumper sticker saying — a bad day fishing is better than a good day working. And that's sort of the story here.

Walsh wanted to know whether this plan was working, and the government invited her to study the issue. So, as part of her graduate work at the Scripps Institution of Oceanography, she flew to Kiribati to interview fishermen.

"And it turned out that, actually, the result of paying people more to do coconut agriculture was to increase fishing," she says. In fact, fishing increased by a startling 33 percent. The reef fish population dropped by an estimated 17 percent, putting the whole ecosystem at risk.

"It was a bit of a surprise, and we were wondering: What's going on here?"

The answer was simplicity itself. Walsh's study concludes that people earned more money making coconut oil, which meant they could work less to support themselves. And they spent their new leisure time fishing.

"It hit us like a bumper sticker saying — a bad day fishing is better than a good day working. And that's sort of the story here," Walsh says.

It turns out she had stumbled into a universal truth about fishing. Fishermen aren't just in it for the money. Anthropologist Richard Pollnac of the University of Rhode Island says, just think of those snazzy sport-fishing excursions.

"People pay big money to go sports-fishing," he notes. There aren't very many occupations that people will actually pay money to do in their leisure time, he says.

So fishing as an occupation provides psychic benefits, as well as money. Pollnac argues that not just individuals but whole cultures get hooked on the thrill of being out on the water, and the gamble of coming back with either a boatload or empty-handed.

"This type of an occupation selects for a certain type of personality, and that kind of personality will not be happy in many other occupations other than fishing," Pollnac says. As a result, attempts to get fishermen to do something else — even something that pays better — often end in failure.

"There have been projects where they had vessel buyback programs, and almost 50 percent of the fishermen used that money to buy another boat to do another type of fishing, and in some cases get right back into fishing," Pollnac says.

The track record for international projects is poorly studied, which makes Walsh's research notable. Pollnac says he can't point to any great successes.

"A great deal of the international development money, I would argue, is wasted."

This problem is not lost on Craig Leisher at the Nature Conservancy. His organization does spend money to help fishermen seek other livelihoods. But does it keep them out of their boats?

New Jobs Should Be On Water

He says the Nature Conservancy creates non-fishing jobs, but only as a tactic to help during a transition. For example, fishermen may need a temporary source of income when a new no-fishing zone is established. Fishermen lose their fishing income for a while — until fish populations in the no-fishing zone grow large enough to provide a new source of fish in the surrounding waters.

"What we have found with our research is that a lot of alternative income activities are not successful in the long term, so we look for activities that can benefit communities in the near term, just two or three years," Leisher says.

Which brings us back to the island nation of Kiribati. Walsh says she's trying to help the government figure out how to fix the problem of overfishing, which they'd accidentally made worse. Maybe, she says, the government can create new jobs out on the water by hiring the fishermen to patrol newly created nature preserves.