Accessibility links
100 Years Of Johnny Mercer, Pop Poet Laureate He wrote the words, and sometimes the music, for more than 1,500 songs, among them "Skylark," "Blues in the Night" and "Moon River." He had a few hits himself on Capitol Records — which he started. He was a great American lyricist, and today marks the 100th anniversary of his birth. 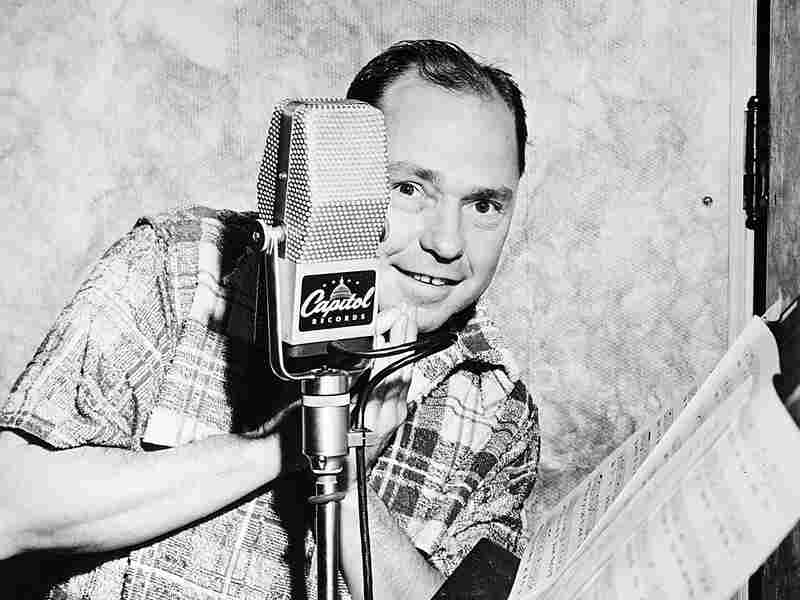 Johnny Mercer's hometown of Savannah, Ga., dedicated a monument to him on what would have been his 100th birthday. Special Collections and Archives, Georgia State University Library hide caption 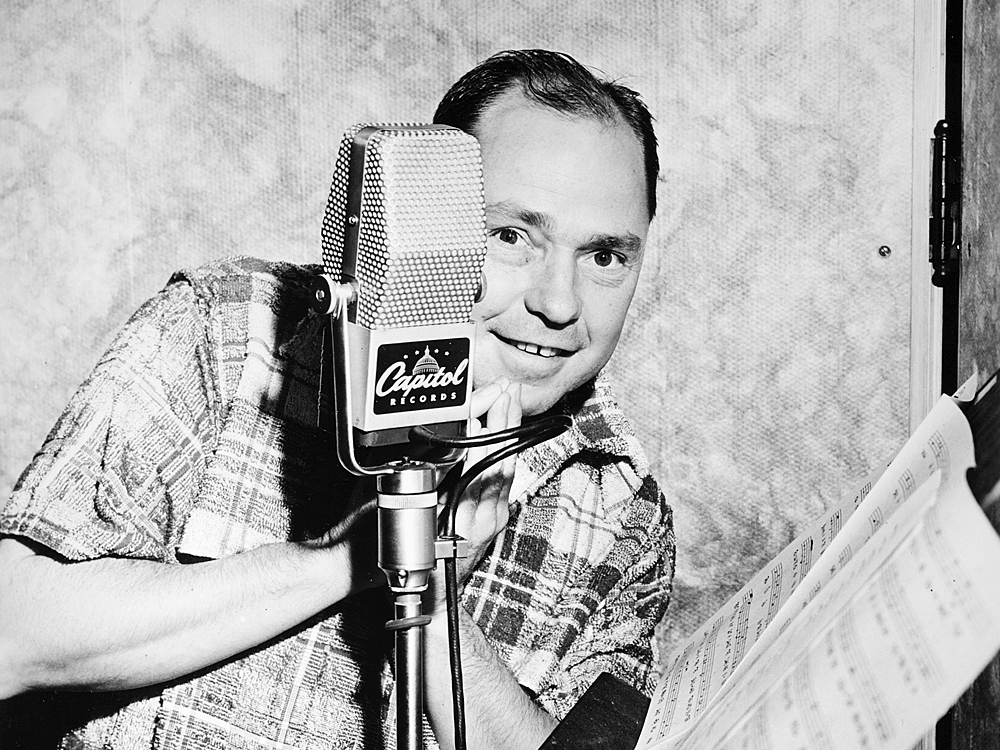 Johnny Mercer's hometown of Savannah, Ga., dedicated a monument to him on what would have been his 100th birthday.

In May 1971, songwriter Johnny Mercer appeared at New York's 92nd Street Y to sing and talk about his remarkable career. He told the audience what he tried to listen for when a composer first played the music for a new song.

"You get a little glimmer and you say, 'Ahhh!' " he told the crowd. "You don't even know if it's a word. And then it begins to ... you know, it's like you're tuning in to a musical instrument that's miles away. And you say, 'Oh, yeah, there's something there. If I just dig hard enough, I know it'll come.' "

For close to 50 years, Mercer dug hard, and the hits kept coming. "Ac-Cent-Tchu-Ate the Positive." "Skylark." "Laura." "Blues in the Night." "Moon River."

Mercer wrote the words, and sometimes the music, for more than 1,500 songs, with more than 200 collaborators, among them composers Harold Arlen, Hoagy Carmichael and Jerome Kern. He was nominated for 18 Academy Awards and won four.

One hundred years ago today, Johnny Mercer was born in Savannah, Ga. And he grew up to be one of the most popular lyricists of the American Songbook.

Robert Kimball recently co-edited The Complete Lyrics of Johnny Mercer. He says, in some ways, that Mercer was a pop-music poet laureate.

"He was a national writer," Kimball says. "Most of the writers were city people and Johnny came from the South, from a more rural part of America, and they're reflected in his work."

Savannah is a city, but Mercer's lyrics are filled with down-home turns of phrase, train whistles and bird calls. Mercer's niece, Nancy Gerard, grew up in the same house in Savannah where her uncle was raised.

"It's a slow, kind of easy, genteel demeanor that people just grow up with," Gerard says.

Mercer may have grown up in Georgia, but he spent most of his career in Hollywood. Not only did he write a string of hit songs for movies from the 1930s to the '50s, for performers from Fred Astaire to Bing Crosby to himself. According to Gerard, Mercer had 13 Top 10 hits as a singer.

Mercer recorded most of those hits for the label he helped found in L.A.: Capitol Records.

The Days Of Wine And Roses

Mercer wrote the lyrics for "On the Atchison, Topeka and the Santa Fe," for the film The Harvey Girls, starring Judy Garland. Though Mercer was married to the same woman, Ginger, from the age of 20 until his death at 66, Garland was the love of his life, historian Robert Kimball says.

" 'That Old Black Magic' is about Judy, 'One for My Baby' is about Judy and 'I Remember You' was about his relationship with Judy," Kimball says.

The love affair haunted Mercer and most likely didn't help his lifelong struggle with alcohol and anger. Andrea Marcovicci has researched Mercer's life for a cabaret show devoted to his songs.

"He could drink a certain amount, and then take one sip more, and out would come this extraordinary beast," Marcovicci says. "And he had a tendency to attack, but he always remembered everything that he did, unfortunately, and then apologized the next day. And he sent roses."

And The Angels Sing

Like many writers of his generation, Johnny Mercer found his kind of songwriting pushed aside with the rise of rock 'n' roll. Then in 1961, Henry Mancini called, asking him to write a song for the film Breakfast at Tiffany's.

"And, at that moment, he writes 'Moon River,' and he gets a brand-new career," Marcovicci says, laughing. "It was a wonderful arc for him, because Mancini truly resurrected Johnny Mercer."

Mercer died of a brain tumor on June 25, 1976. He's buried in Savannah's famous Bonaventure Ceremony with members of his family. And all of their tombstones have quotes from his lyrics, according to his niece.

"His has 'And the angels sing,' " Gerard says. "His wife, my aunt Ginger's, has 'You must've been a beautiful baby'; my mother's has 'Dream, when the day is through' — that was her favorite song — and my grandmother's has 'My mama done tol' me.' "

Gerard says hers will read: "Skylark, won't you lead me there." Today, the city of Savannah has unveiled a statue of Johnny Mercer, in honor of his 100th birthday. 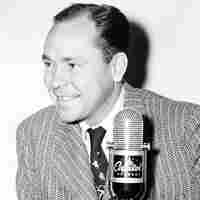 While Johnny Mercer's songs were covered by some of the greatest singers of the 20th century –- among them Ella Fitzgerald, Frank Sinatra and Bing Crosby -– there's nothing quite like hearing the songwriter performing his own work. Mercer was a truly distinctive singer, jazzy and soulful. In addition to writing countless hit songs, Mercer was a popular radio personality and recording artist. With songwriter Buddy DeSylva and music-store owner Glenn Wallichs, Mercer founded Capitol Records in 1942, and recorded many of his songs on the label. Here's one. 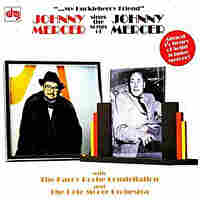 In 1974, Mercer recorded an album for Pye Records in England, revisiting some of his hits with some contemporary arrangements. While they're a bit too "groovy" for my tastes, it still gives listeners an opportunity to hear the songwriter sing some of his evergreens. 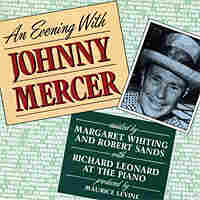 Out Of Breath (And Scared To Death Of You)

Out of Breath (and Scared to Death of You)

In 1971, Mercer appeared at New York's 92nd Street Y and spent an hour talking about his work and performing songs from throughout his career. This is an extraordinary recording: He sings a medley of his hits at the end of the evening that goes on and on and on. But he also performed the very first professional song he ever wrote, which gives you a sense of how accomplished he was as a lyricist, even at 21. 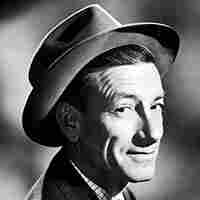 As an added bonus, here's Hoagy Carmichael, singing one of the hit songs he wrote with Johnny Mercer.