Accessibility links
Counting Stimulus Jobs Is Tough Work The Web site Recovery.gov says more than 640,000 jobs have been created or saved by the government stimulus. But the head of the board that tracks stimulus spending tells Congress he can't certify that number is "accurate and auditable." A reporter finds that counting the jobs created or saved isn't an easy task. 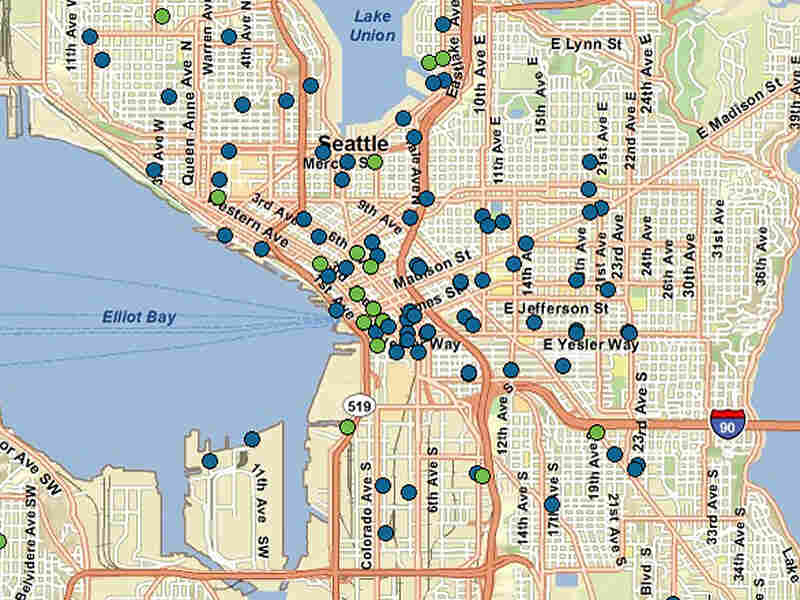 Recovery.gov allows users to zoom into cities like Seattle to find organizations and businesses that have received federal stimulus funds. NPR hide caption 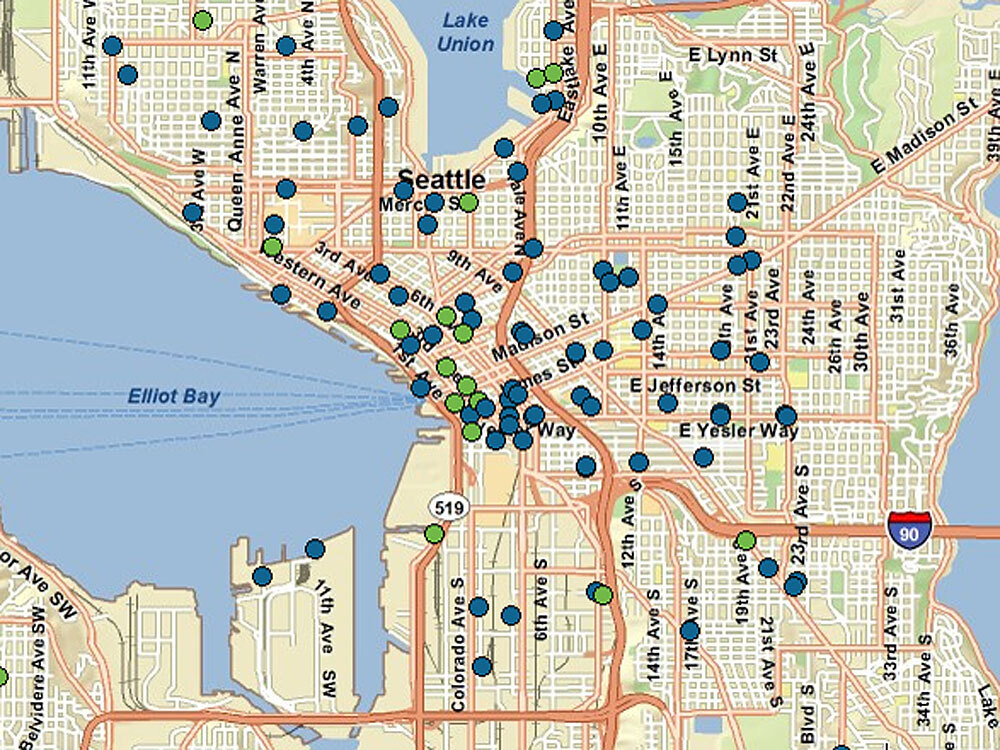 Recovery.gov allows users to zoom into cities like Seattle to find organizations and businesses that have received federal stimulus funds.

The massive economic stimulus bill may not be stimulating as many jobs as the government says.

The Web site Recovery.gov says that more than 640,000 jobs have been created or saved so far under the $787 billion stimulus package. But the head of the board that tracks stimulus spending tells Congress he can't certify that number is "accurate and auditable."

Over the past few days, there have been reports of major errors on the Web site, including jobs created in congressional districts that don't exist, and companies counting pay raises as jobs saved.

In search of stimulus jobs in Seattle, an NPR reporter went online and clicked dots on the Washington state map posted on Recovery.gov. These dots show where stimulus funds have been allocated.

Early Music America Inc., a nonprofit for people who enjoy the sound of lutes and sackbuts, received $25,000 in stimulus money. According to the government's Web site, the stimulus money saved 0.5 jobs at Early Music.

"It's actually two 0.25 jobs, to be honest," says Baroque flutist Maria Coldwell, the director of the group. "It's a quarter of my salary and a quarter of Patrick's salary." She waves at her colleague on the other side of the cramped office space.

But did the stimulus actually save their jobs?

"Before we got this money, we were projecting two-week furloughs for the whole staff, plus the cutback in hours," Coldwell says. "And this money made all of that unnecessary." 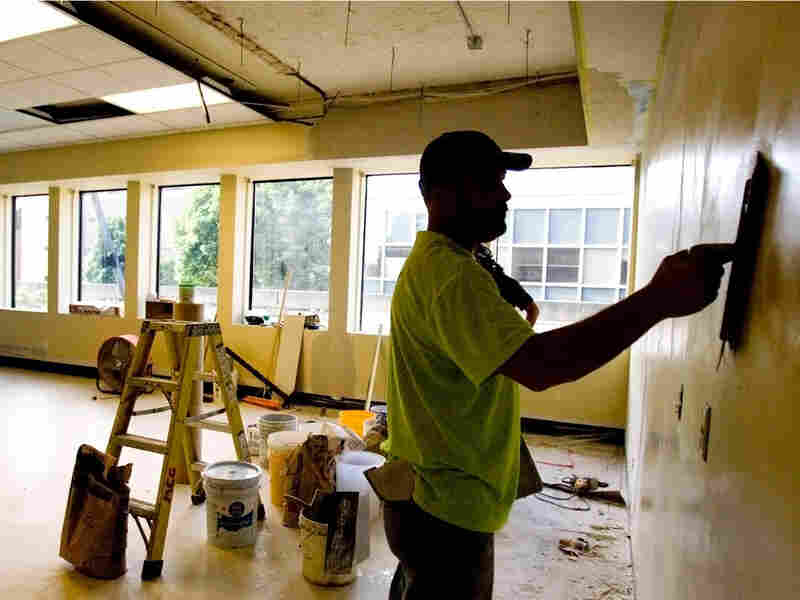 Kelly Plandel works on the renovation of a Portland State University classroom in Portland, Ore., in July. The renovations are part of Oregon's $176 million stimulus package. Don Ryan/AP hide caption 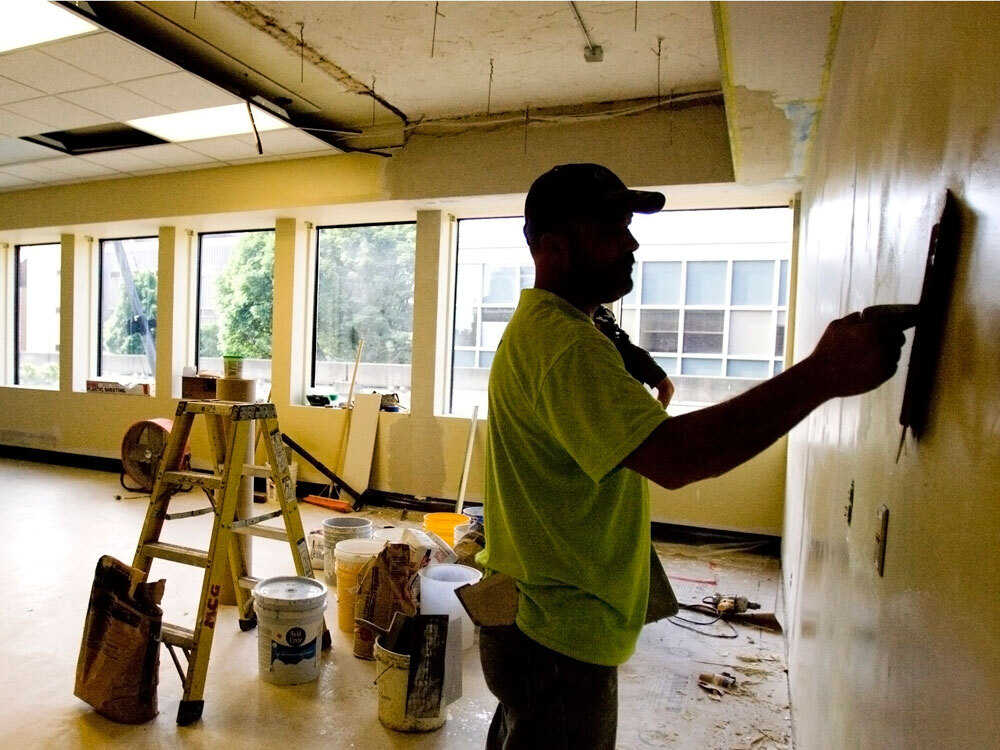 Kelly Plandel works on the renovation of a Portland State University classroom in Portland, Ore., in July. The renovations are part of Oregon's $176 million stimulus package.

So no job was saved, but some income was. This job-equivalency math gets more complicated at bigger organizations. Another click on a green dot on the government's map shows that as of Sept. 30, $417,000 of stimulus money went to a company called Amnis. That money created exactly one new job for the company, which makes super-microscopes.

Co-founder David Basiji says research labs are getting stimulus grants to buy more of its microscopes like the ImageStream-X, which images 1,000 cells a second and produces 12 images of each cell at a time.

"Right here, you can see almost a million dollars worth of product that would not have been sold if there had not been a stimulus program," Basiji says.

And when a government lab uses stimulus money to buy one of these, it's Amnis that gets stuck reporting to the government how many jobs have been created. Basiji says he has to file those reports quarterly. But he doesn't mind the task, since it means closing another sale.

It's hard to say why any job exists. The inaccuracies on Recovery.gov suggest that the government may be claiming credit for too many jobs. But Jill Satran, who oversees stimulus accountability in Washington state, says the opposite is true.

"I feel really comfortable in those numbers," Satran says.

Despite glitches in the data, she says the overall job count is conservative.

And in some cases, the government site fails to list even jobs directly funded by the stimulus. For instance, it lists zero jobs saved or created at a Seattle charity called Solid Ground.

Packing bags of groceries for shut-ins, Amy Sauls says the funding picture for this food program was looking bleak this summer.

But then a stimulus grant came through. Technically, the program won't tap the money until January, which means Sauls' job hasn't been counted yet. She's convinced that if it weren't for the stimulus, she'd be out of work right now.

It's hard to say what might have been. Multiply that across the country, and you start to see why the grand total of jobs saved and created by the stimulus is not so much a statistic as a matter of opinion.