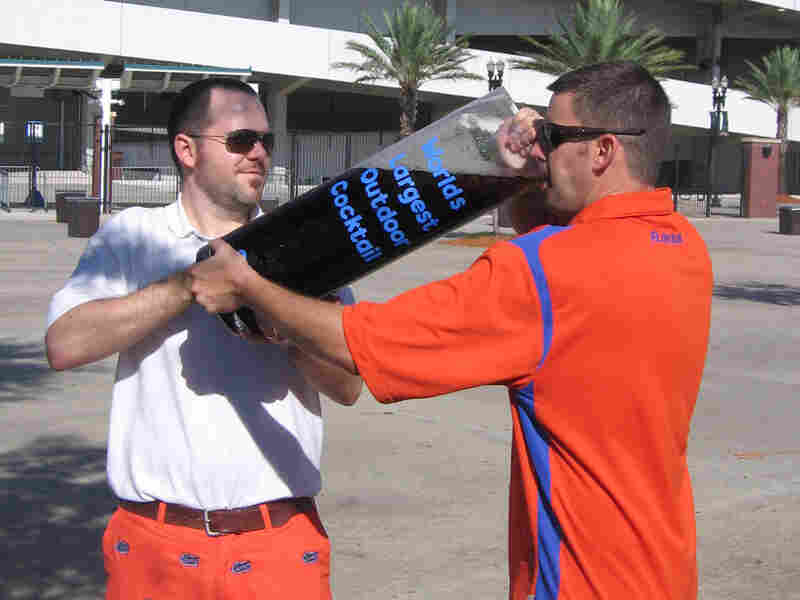 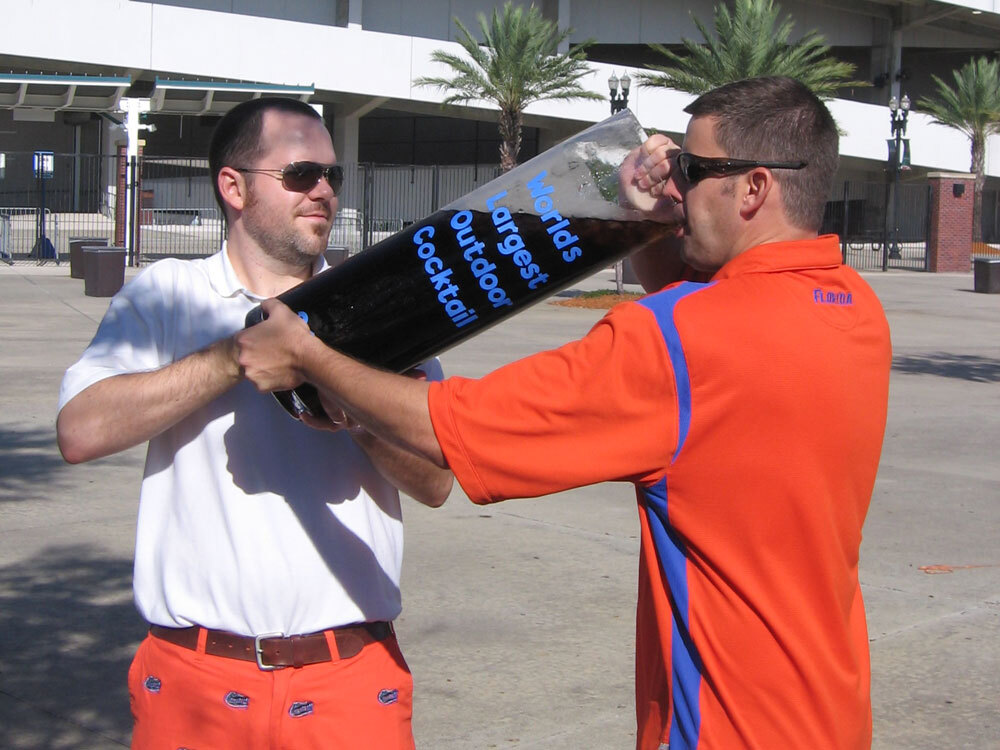 For hundreds of thousands of football fans, fall weekends are a time for tailgating. Part picnic, part pep rally, part drunken revelry, tailgating traces its roots to 1869 and what's believed to be the first intercollegiate football game — between Rutgers University and Princeton University. Fans arrived in carriages, bringing picnics.

Since then, tailgating has grown exponentially, to a point where officials say there are concerns for public safety at some games.

Jacksonville, Fla., hosts an annual event known as the World's Largest Outdoor Cocktail Party. It's an assault on the senses. People are milling, grills are smoking, music is blaring and it's only 10 a.m. It's game day in Jacksonville — and nearly 85,000 fans are here for the annual football matchup between the University of Florida's Gators and the University of Georgia's Bulldogs.

There are as many Bulldog fans as Gator fans here, and the tailgating setups are elaborate. Chip Williams' tailgate is practically palatial.

It's one of the big college football tailgating events of the year. The party traditionally starts the night before, in Jacksonville's Riverfront entertainment district, then moves to the municipal stadium, where parking lots open at 6 a.m.

It's a great football rivalry, and a great party. But in recent years, officials at the two universities have tried to rein in the celebration.

In 2004 and 2005, University of Florida students died in pre-game incidents. Southeastern Conference officials asked the television networks to stop referring to it as the World's Largest Outdoor Cocktail Party.

Try telling that to Tricia Starling. She says officials may pressure TV announcers to give up on the name, but they won't succeed with the tailgaters.

Any drinking, or abusive drinking I guess I should say, would create the potential for risky behavior. And when you have young people participating in risky behavior, it can compound those problems and issues for public safety.

"They never will," Starling says.

Describing the drinks she'd consume throughout the party, she says, "Well, in the morning, we do an orange juice drink, mimosas. We've just finished that, and now we're doing rum and Coke. It's going to be about, probably, 2 liters of Coke in there and a lot of rum."

Not to worry. People in this crowd say they have designated drivers.

All around the stadium, parties like this are in full swing. The city of Jacksonville welcomes the event and puts hundreds of police officers on overtime to keep order.

A big concern is underage drinking. This year, at the game, Florida's Division of Alcoholic Beverages made 252 arrests. The secretary who oversees the division, Charles Drago, says underage drinkers can be a hazard to themselves and others.

"Any drinking, or abusive drinking I guess I should say, would create the potential for risky behavior," Drago says. "And when you have young people participating in risky behavior, it can compound those problems and issues for public safety."

So far, although a number of colleges and even some professional sports teams have taken steps to rein in tailgating — by restricting the number of hours, for example — little attention has been paid to what happens once tailgaters get back on the road.

Traci Toomey, an associate professor at the University of Minnesota's School of Public Health, thinks that should change.

She and some colleagues recently conducted the first research on alcohol consumption by tailgaters. She says they measured the blood alcohol content of people as they left the game to go home.

Toomey says the results of the study have yet to be published. She hopes this and follow-up research will cast a light on the risk that can go along with the tradition and culture of tailgating.

But she acknowledges that taking on tailgating is not for the fainthearted — as some colleges have learned when they've moved to restrict it.

"The campus administrators really hear it from the alumni who come back to the campus for that — the joy of tailgating and then the sporting event," Toomey says. "I think that's a real issue for some of these campuses that are struggling with these alcohol issues with their students."

Many colleges and athletic conferences already have banned beer and alcohol sales in their stadiums. Much more difficult is determining what role schools — or professional teams — have in overseeing fans' behavior when they're outside the stadiums.