Accessibility links
Socialite's School Brings Hope To Brazilian Slum Brazil's ghettos are poverty stricken and violent. But there are people fighting against the odds to turn things around for the poor children of Rio de Janeiro. Among them is an unusual apostle: a Rio socialite who founded a school for slum-dwelling children and views education as an equalizer. 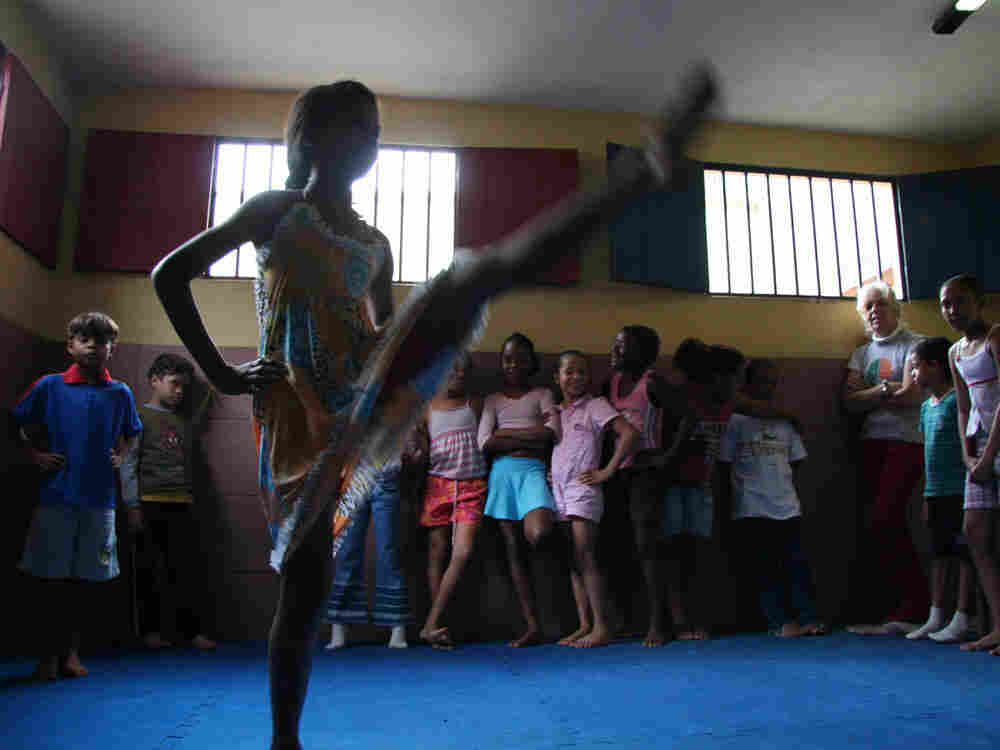 Reading and writing, singing and modern dance are taught at Children of the Golden Rainbow school in Rio de Janeiro. Yvonne Bezerra de Mello, a Rio socialite and the school's founder, hopes to encourage and engage the students, who have been written off by society. Peter Breslow/NPR hide caption 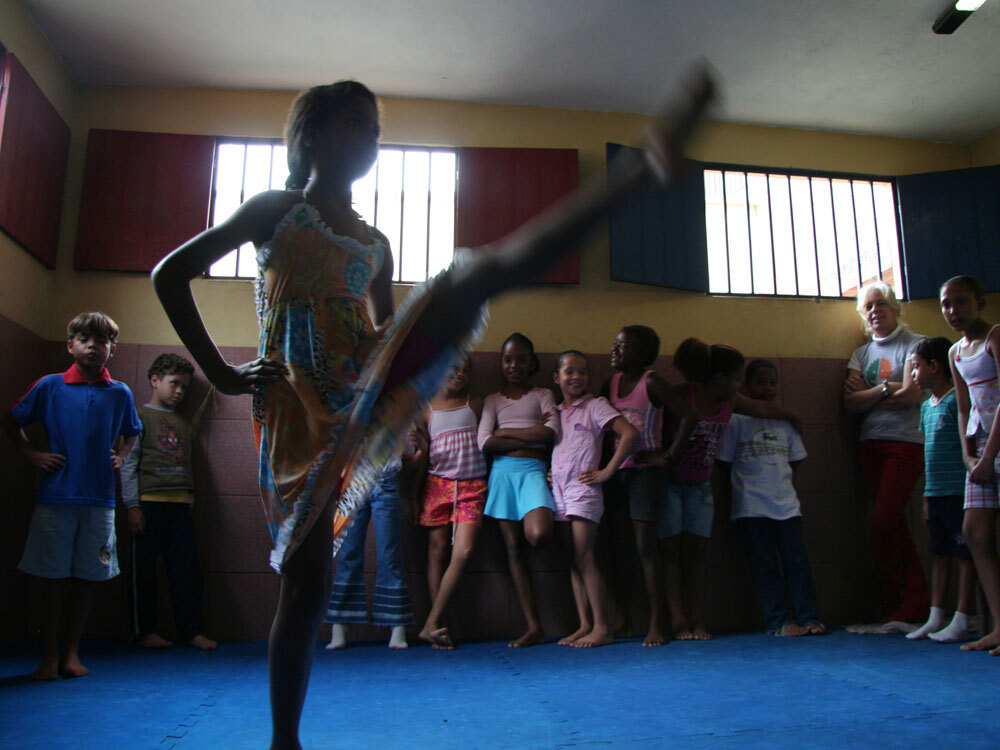 Reading and writing, singing and modern dance are taught at Children of the Golden Rainbow school in Rio de Janeiro. Yvonne Bezerra de Mello, a Rio socialite and the school's founder, hopes to encourage and engage the students, who have been written off by society.

Poverty and violence are part of every day life for children living in Brazil's slums, also known as favelas. But there are some people fighting to change that. One is Rio de Janeiro socialite Yvonne Bezerra de Mello, who dedicates her time and wealth to teaching the poorest of the poor in some of the worst neighborhoods.

Bezerra de Mello founded a school called Children of the Golden Rainbow. When she arrives in the mornings it is all hugs and kisses, but once classes start, it is all business. The children start off their day singing songs in French and English. After morning song is over, Bezerra de Mello plays memory games with the children. They are asked to repeat numbers or phrases as fast as they can.

Bezerra de Mello hopes to encourage and engage the students who have been written off by society.

The goal is to "diminish the intellectual gap between classes," Bezerra de Mello says.

"This is the issue for Brazil, for India, for it doesn't matter who," she says. "You can give food, you can give clothes, but the intellectual gap will be there, so no way of improving the country. Who takes care of the brain? I am taking care of the brain."

Wide Gap Between Rich And Poor

Lately, Brazil and its popular President Luiz Inacio Lula da Silva have been getting worldwide attention for lowering poverty and closing the gap between rich and poor. Economists say Brazil is a model for the developing world. 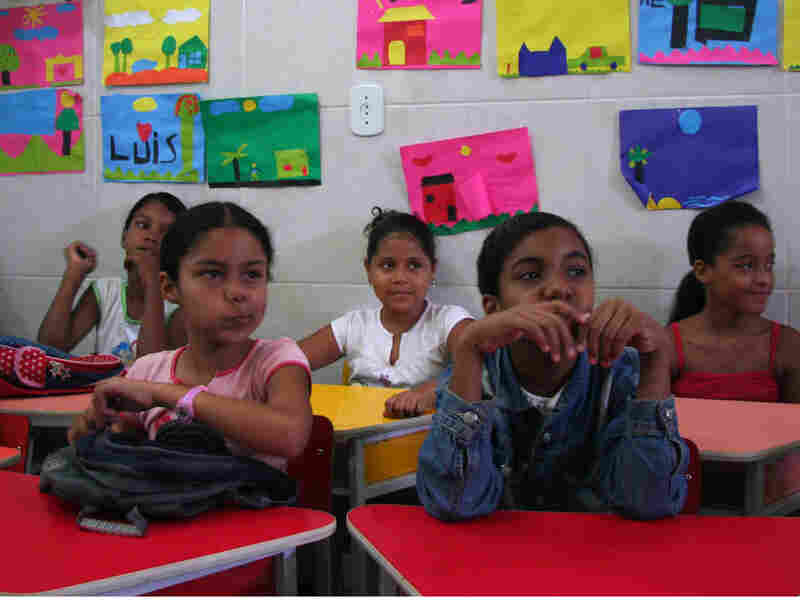 Students in a classroom at Children of the Golden Rainbow school. The school was founded 12 years ago in one of Rio's most notorious slums. Peter Breslow/NPR hide caption 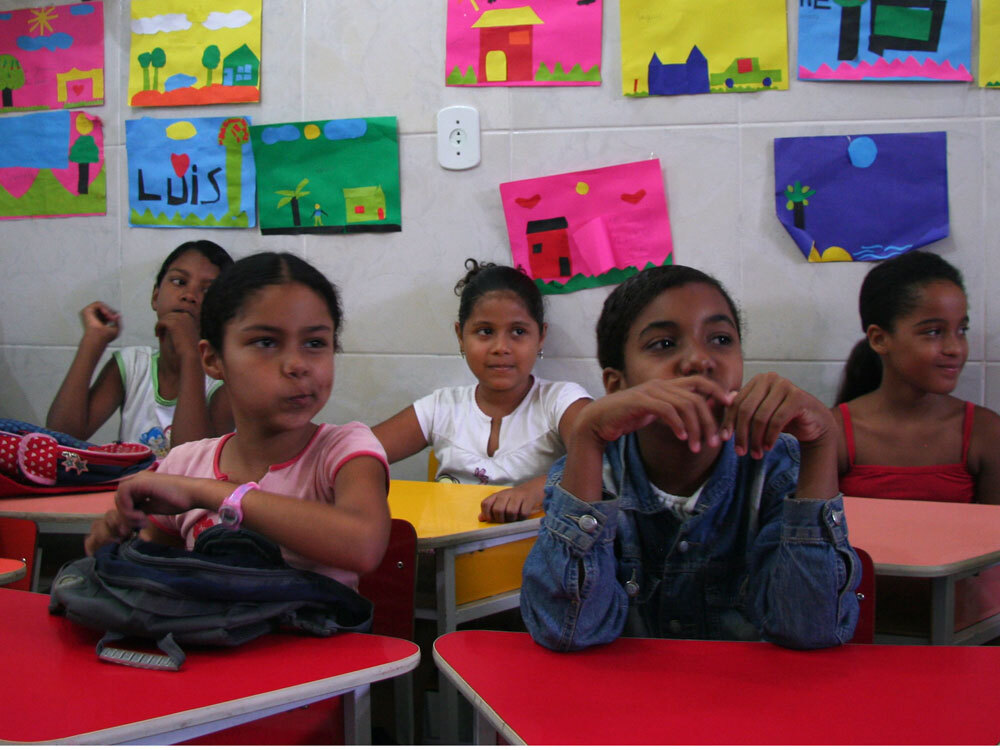 Students in a classroom at Children of the Golden Rainbow school. The school was founded 12 years ago in one of Rio's most notorious slums.

But this country, with a population of 190 million, remains a nation of stark inequalities — and Bezerra de Mello knows it better than most.

She was raised in affluence in Rio de Janeiro and studied in Sweden and Italy. She speaks six languages and her husband is a hotel magnate. Her home is in one of Rio's most elegant neighborhoods. On weekends, she rides show horses and relaxes in a country house in the mountains.

But her seemingly perfect life was shaken in 1993 when police opened fire on street children outside La Candelaria church in Rio. Eight children were killed. The brutality shocked the world and Bezerra de Mello went on a mission.

"From that day, my life changed very much," she says.

Committed to being an advocate for the children, "the question was what to do next, for me," she recalls. "That's why I took the survivors and I went down a bypass and built this project in the street, with the survivors."

Bezerra de Mello started a school with 62 children who were living on the streets around La Candelaria. The first school was positioned under a viaduct, which acted as a roof. The walls were made from flimsy planks of wood.

The school is now 12 years old and growing, thanks to donations from philanthropists from around the world. These days, modern dance has been added to the curriculum. The school is located on the edge of a favela called Mare, which was once a swamp. Now it's a neighborhood of dark, forbidding corridors where three drug gangs do battle.

Bezerra de Mello's school is not bright and airy — the classrooms are cramped and the stairwells are narrow. But it is stocked with books and has a computer lab, blackboards and desks. The teachers push the children hard, emphasizing not just book learning.

"If they want to go further in life, they have to speak correctly," Bezerra de Mello says. "What they do here is to learn. All those details we work out here. So, at the age of 10 they behave very good, they talk very good, they know things, they can hold a conversation, doesn't matter what subject, because we have their training since they are four years old."

It is still an uphill battle. Children in Mare suffer from AIDS and broken families. Violence is a fact of life. Bezerra de Mello says 360 children she has known and worked with have died.

But she won't give up. At 62, she looks 20 years younger seems to have as much energy as her students.

One boy, Brandon Santora da Silva, 6, arrived recently at the school barely able to talk. He lives with his mother and five siblings in a cinderblock room.

It has only one bed, no running water and no bathroom. His mother, Liria Gomes Almeida, says her boy used to fight and run away from home. Now he is obedient and calmer. She says he's even learned to write his own name.

Bezerra de Mello admits to being a blunt pragmatist and says that it is too early to call Brandon a success story. But she remains optimistic about "her children," as she calls them.

Bezerra de Mello says the elite often scorn the poor in their midst and blame them for the city's crime.

Increasingly, people are starting to listen. She was recently hired to coach 150 teachers from some of Rio's toughest public schools.