Accessibility links
On Two Wheels, The Road Looks Different As soon as Caroline Keem started commuting to work on a bike, she learned the hard lessons of the road. 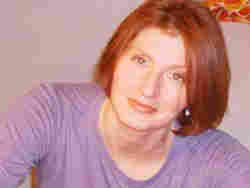 Caroline Keem is a painter, sculptor and designer who loves to garden, tinker with electronics and watch the sun come up on her bike ride to work. Courtesy of Caroline Keem hide caption

This summer I bought a bicycle and began commuting the nine miles to work in downtown Chicago on two wheels. I started hating the inventions of the cell phone and iPod as I saw bikers, walkers, joggers, even drivers rolling along determined to tune out the rest of the world.

"You can't block out the world while you're still in the middle of mine!" I thought angrily.

We gave our listeners 250 words to tell us about their gripes with the road. We picked the eight best essays, and we unveil them one by one this week.

Astonishingly, I often see bikers not doing what they ought to. They don't signal, they ride on the sidewalk and, worst of all, they don't wear the required lights so they can be seen. One night last week, I was walking in my neighborhood when out of an alley sped a biker. He chased me down the sidewalk, yelling. After he finally rode off, I realized why people hate cyclists.

My attacker was likely just passing on the aggression he had just received from some other person or driver.

But on the road, I feel I have to do better than just pass it on. I have to pay it forward.

What other people should or should not be doing on the road is none of my business. My only responsibility is to have manners, wave a "thank you" to the driver who lets me go first through the intersection, warn pedestrians that I'm passing them, to make sure that I'm seen and to remain alert to the world.

Caroline Keem is a painter, sculptor and designer who loves to garden, tinker with electronics and watch the sun come up on her bike ride to work.