Accessibility links
Senate Debates Through the Night on Iraq War As promised, Senate Democrats held a debate on the Iraq war that lasted through Tuesday night and into Wednesday morning. Still, they failed to get enough votes to consider a measure that would have called for U.S. troop withdrawal from Iraq in four months.

Listen
Senate Debates Through the Night on Iraq War

As promised, Senate Democrats held a debate on the Iraq war that lasted through Tuesday night and into Wednesday morning. Still, they failed to get enough votes to consider a measure that would have called for U.S. troop withdrawal from Iraq in four months.

The all-night debate is over, but the congressional deadlock over Iraq policy goes on. The Senate couldn't get enough votes today to consider a measure that would begin withdrawing U.S. troops from Iraq in four months. A small majority of the Senate supported consideration of the measure. Fifty-two senators voted aye, but 60 votes were needed. The outcome was not unexpected, but the long hours of debate were still intense and often impassioned.

Senator JOHN McCAIN (Republican, Arizona): Nothing we have done for the last 24 hours will have change any facts on the ground in Iraq or made the outcome of the war any more or less important to the security of our country.

Unidentified Man: The Levin amendment is not a credible alternative to the current strategy.

Senator HARRY REID (Democrat, Nevada): The American public is opposed to the surge. They're opposed to the war. They want our valiant troops to come home.

AMOS: David, what made this vote today, except for the part where they were up all night, different from debates over the last several months and years?

WELNA: Well, I think that there's a sense that this vote is really a vote on where the war in Iraq is going to go, and right now this is was a test of whether there are the votes in the Senate to force President Bush to change his policy in Iraq. That's why many Republicans did not want the amendment that would force troop withdrawals to begin within four months to even come up.

That's what the vote was about today. It was about just moving to that amendment, not even voting on the amendment. This was a filibuster. It's the right of the minority to use its minority status to demand 60 votes to go forward.

It was a sense of a very historic day and the fact that this amendment will not be taken up I think means that those who want a change in Iraq are probably going to have to wait a little bit longer.

AMOS: Well, and that is what is now key. We have a majority in the Senate and in the House who do want change, but there's no immediate prospect for that, so why?

WELNA: Well, it's a simple majority. There are a hundred members of the Senate and there were 52 votes to proceed to this troop withdrawal amendment, so if you were simply going by the simple majority, you would have enough senators.

But right now I think there are many Republicans with misgivings about Iraq, but they've agreed to stick with President Bush on this until mid-September, when General David Petraeus, the commander in Iraq, and Ambassador Ryan Crocker, who is in Baghdad, come and tell Congress how things are going there. At that point I think you might see a stampede away from the Iraq policy.

AMOS: So what we haven't talked about is the shadow of the president's veto. You can have a majority, but you need more than a majority.

WELNA: That's right. You need 67 votes in the Senate to override a presidential veto. It's not clear, even in September, whether there would be enough Republican departures from the White House to get that 67. But right now it looks like there are only four Republicans who are willing to openly vote against the president at this point.

AMOS: David, did this debate today, as it has now ended, did it change anything?

WELNA: Well, I think that one thing it really changed was that the defense authorization bill, which they were trying to amend with this troop withdrawal related amendments, has been pulled by Majority Leader Reid, and it's not clear when it will come back on the floor again. So there were other amendments also related to drawing down troops. They're all on ice, as it were for now, but Reid said he's hoping to bring it back and it may not be until September when we see that.

AMOS: Well, thank you very much. David Welna, who's reporting from Capitol Hill. 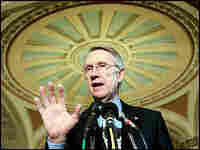 Senate Majority Leader Harry Reid (D-NV) speaks during a briefing. After an all-night debate, Republicans blocked an amendment to the Defense Authorization Bill that would require the start of withdrawing U.S. troops from Iraq in 120 days. Alex Wong/Getty Images hide caption 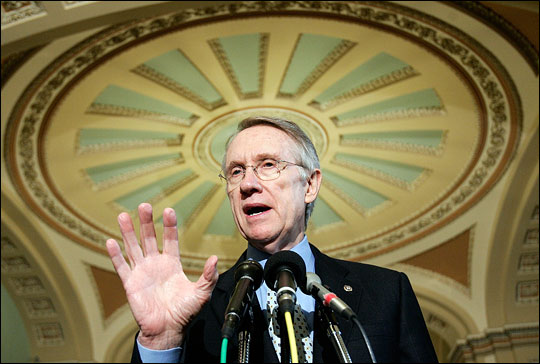 Senate Majority Leader Harry Reid (D-NV) speaks during a briefing. After an all-night debate, Republicans blocked an amendment to the Defense Authorization Bill that would require the start of withdrawing U.S. troops from Iraq in 120 days. 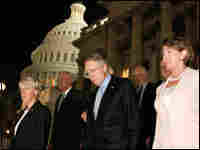 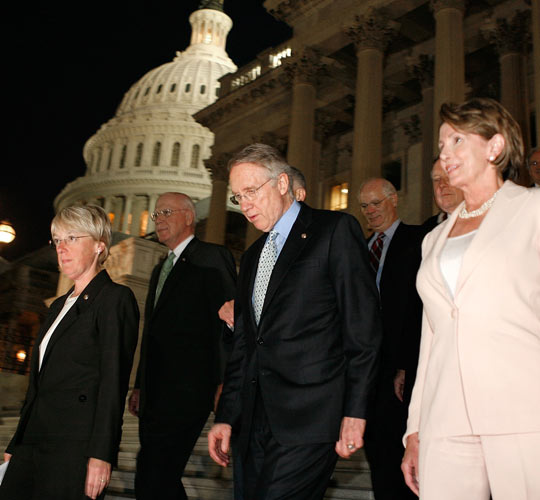 Senate Majority Leader Harry Reid walks with U.S. Speaker of the House Nancy Pelosi (right) of California and Sen. Patty Murray of Washington toward a rally on Capitol Hill on Tuesday night.

Senate Republicans on Wednesday blocked an effort by Democrats to bring U.S. troops home from Iraq by April.

After an all-night session, the 52-47 vote fell short of the 60 votes needed to cut off debate under Senate rules. It was a sound defeat for Democrats who say the U.S. military campaign, in its fifth year and requiring 158,000 troops, cannot quell the sectarian violence in Iraq.

"We have to get us out of a middle of a civil war," said Sen. Joseph Biden (D-DE), chairman of the Foreign Relations Committee. A political solution must be found "so when we leave Iraq, we don't just send our children home, we don't have to send our grandchildren back."

As members cast their votes, Secretary of State Condoleezza Rice hurried between private meetings with lawmakers in their Capitol Hill offices to make the administration's case for the war.

The Democratic proposal, by Sens. Carl Levin (D-MI) and Jack Reed (D-RI), would have required the president to start bringing home troops within 120 days and complete the pullout by April 30, 2008.

Under the bill, an unspecified number of troops could remain behind to conduct a narrow set of missions: counterterrorism, protection of U.S. assets and the training of Iraqi security forces.

Republicans were mostly unified in their opposition to setting a deadline for troop withdrawals, with a few exceptions. Three Republicans — Sens. Gordon Smith of Oregon, Olympia Snowe of Maine and Chuck Hagel of Nebraska — had announced previously that they would support the measure.

Sen. Susan Collins (R-Maine), who is up for re-election next year, also voted to advance the bill.

Other GOP members, while uneasy about the war, said they could not support legislation that would force President Bush to adhere to a firm pullout date.

"The amendment tells our enemies when they can take over in Iraq," said Sen. Saxby Chambliss (R-GA), who is also up for re-election next year.

The bill "is the wrong approach at the wrong time," he added.