Accessibility links
GlobalPost: A New Experiment In Foreign Coverage In recent years, budgets for permanent foreign staffs have been slashed in all but a handful of newsrooms. GlobalPost, an upstart online news outlet that relies on a network of more than 70 part-time contributors in 50 countries, is making the case for a new for-profit model for covering the world. 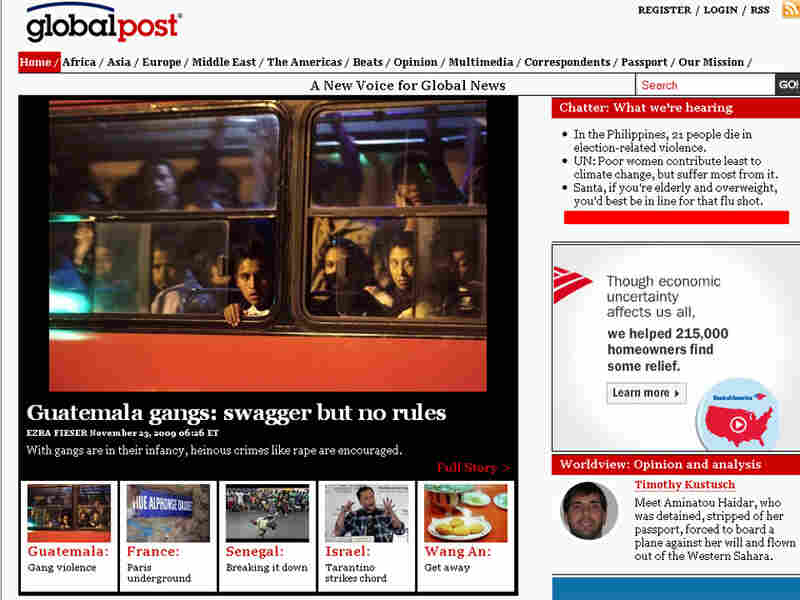 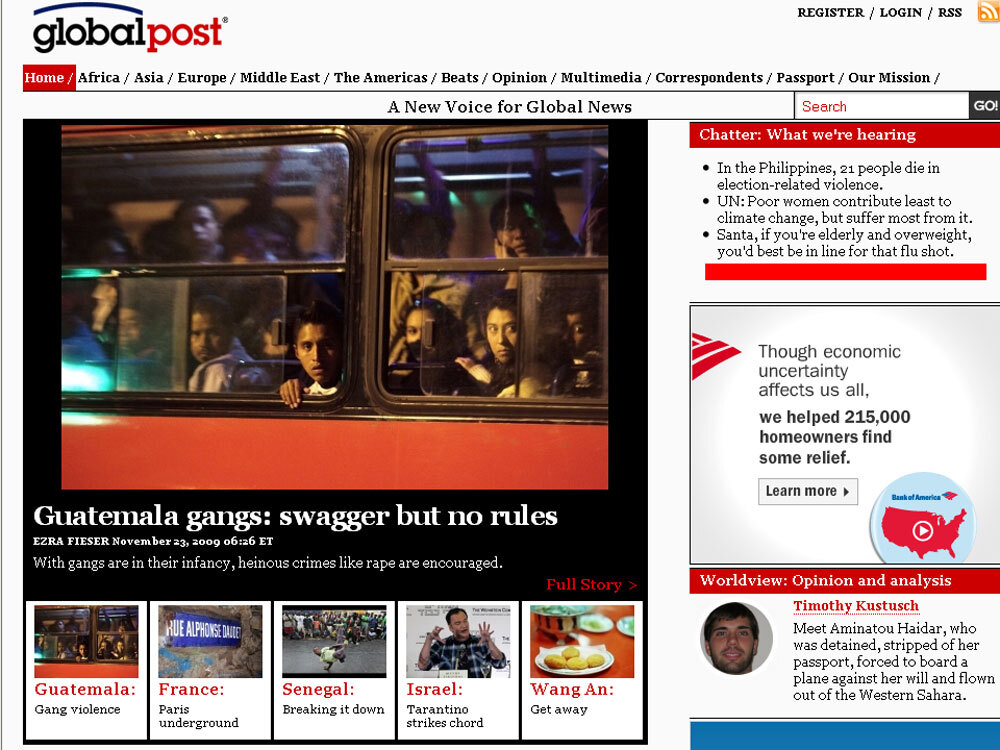 GlobalPost, an online, for-profit news outlet, relies on a network of 70 part-time contributors in 50 countries.

Two wars, one global economic mess and an ongoing concern about terrorism might reasonably add up to a desire by people to know what's going on in the world — and a journalistic imperative to tell them.

But the news business is suffering, and those wars are expensive to report on. In recent years, budgets for permanent foreign staffs have been slashed in all but a handful of newsrooms. If there were ever a time when an evangelist was needed for the cause of foreign news, it is now.

And that someone might sound a lot like Charles Sennott, a veteran of covering conflicts in 15 countries for the New York Daily News and his hometown Boston Globe. He is impatient and ferocious about his cause. And he's the executive editor of GlobalPost, an upstart online news outfit that's making the case for a new for-profit model for covering the world.

GlobalPost has 16 full-time employees in Boston, and more than 70 part-time correspondents scattered across 50 countries and all continents, a reflection of Sennott's promise of "ground truth" — the idea that the people doing the reporting will actually be based in the regions on which they report. Television networks typically ship reporters thousands of miles to "parachute in" on big stories. GlobalPost's reporters will already be there.

GlobalPost has signed up writers with impressive pedigrees. Jane Arraf reported for CNN and NBC News; Michael Goldfarb was a foreign correspondent for NPR; and Edward Gargan reported for Newsday and The New York Times.

Visitors to the GlobalPost Web site have found in-depth reports about the working conditions of people in developing countries who assemble iPhones, cell phones and laptops; a first-person account of a terrorist attack in Kabul; and the tale of the discovery of two unopened crates of whiskey left in Antarctica a century ago by the explorer Sir Ernest Shackleton.

"Quite honestly, when we heard about GlobalPost and they approached us, we were kind of intrigued by their operation," says CBS News foreign editor Ingrid Ciprian-Matthews. "It's a unique Web site, if you will. They have quite an impressive pool of freelance journalists, and so we saw it as an opportunity to expand our reach."

GlobalPost stories now run on the CBS Web site, but the paid partnership that has ensued has the possibility to yield far greater dividends. A GlobalPost reporter in Brazil helped coordinate the network's coverage when a French airliner went down earlier this year, for example.

And in September, a story by CBS reporter Nancy Cordes for the CBS Evening News was constructed around the reporting of GlobalPost's Jean MacKenzie, about the diversion of federal contracting dollars in Afghanistan as payoffs to the Taliban.

Both sides say GlobalPost's reporters serve as an added safety net, not the outsourcing of a network's own reporting.

But there is a catch. GlobalPost can afford to build its reporting corps so large only because it's paying so little. Correspondents are paid $1,000 for producing four articles a month. While they can earn more, reporters need to supplement that $12,000 minimum annual pay with sidelines that pay better. Many are stringers elsewhere, teach, find foundation grants or are working on books. It means they can't devote full time to GlobalPost, either.

Yet it does mean people have an outlet to report about many of the places and issues they care about most.

John Daniszewski, a senior managing editor for The Associated Press, calls the arrangement "a little bit exploitative," but says reporters are going in with open eyes. Many have been laid off or forced out as foreign staffs have been slashed. And, he says, GlobalPost serves up some intriguing stories.

"I would rate it at this stage as a noble experiment," Daniszewski says. "It provides an alternative that I do think is valuable because ... there aren't a lot of voices out there anymore."

No one expects GlobalPost to beat or become the enormous AP. But Daniszewski argues that GlobalPost's coverage needs to be more tangibly driven by hard news or specific developments abroad. He says internal studies at AP show that's what compels readers to take time out of their increasingly media-saturated lives to read about news from other countries.

"They're a little weak, because they're a little scattered and they don't really have the resources," says Daniszewski. "Let's face it, gathering news is a pretty expensive proposition, and they can't hope to be comprehensive."

But GlobalPost CEO Phil Balboni hopes to pay more, report more and earn more for the company. He is well-regarded as the creator of respected and profitable television news programming in Boston. Balboni says he first had the idea for a loose network much like GlobalPost when he graduated from journalism school in the early 1970s, but he didn't have the money to give it a try. This time around, his investors include former Boston Globe publisher Benjamin Taylor. And they say they believe they will be able to charge for some of the content generated by their journalists.

"In the online world, even though it began as 100 percent free and remains substantially free, we need to find ways to make a transition to a contribution by people," Balboni says.

In the online world, even though it began as 100 percent free and remains substantially free, we need to find ways to make a transition to a contribution by people.

The main Web site indeed offers most articles for free and charges advertisers to reach those readers. The international electronics powerhouse Siemens has signed up as a major new advertiser, and GlobalPost's internal figures are said to show its monthly traffic will exceed 600,000 unique visitors this month, though that was not independently verified.

Significantly, the site has also arranged for links to drive readers to its stories from a varied range of sites, including HuffingtonPost.com and BillOReilly.com. Newly struck deals now include the Web sites of Reuters and AOL.com, officials at those outlets confirm. Those alliances may also help drive up traffic to free stories.

But Balboni and other officials hope to charge some readers. A modest but growing number of members pay to participate in weekly conference calls with reporters on stories and the regions in which they report. News outlets including the New York Daily News, the Pittsburgh Post-Gazette, the South China Morning Post, a French language news agency and a major Cambodian newspaper are paying GlobalPost to republish its stories.

Perhaps most daringly, GlobalPost charges private clients thousands of dollars to commission specific reports for their own reading. In one instance, the investment analysis firm Riedel Research wanted information on credit card use in China. David Riedel, a GlobalPost reader who is president of the company, said he recently signed up his firm to pay for 10 such reports next year.

That use of journalists' energy might raise eyebrows among purists. Sennott and Balboni say they have created safeguards to protect the integrity of their reporters and their news outlets. First, they do not tell the reporters the identity of the client. Second, the pieces are intended to report, not advocate. Third, while clients have exclusive rights for several weeks, GlobalPost ultimately retains the right to publish any material it uncovers. And fourth, under the terms of the contract, it can always return the money and publish immediately if the news is hot enough.

Executives say they simply have to find new ways to pay for original reporting by driving up Web traffic and creating new streams of revenue.

And Sennott and his colleagues say they very much hope they have hit upon the way to pay for those eyes to stay focused on events in distant lands.