Accessibility links
The 'Wild And Woolly' World Of Bulletin Boards These days, if you want to find a fling, a friend or a cheap used sofa, you might check craigslist. But decades before Craig Newmark posted his first list, computer users all over the country were connecting through electronic bulletin boards. 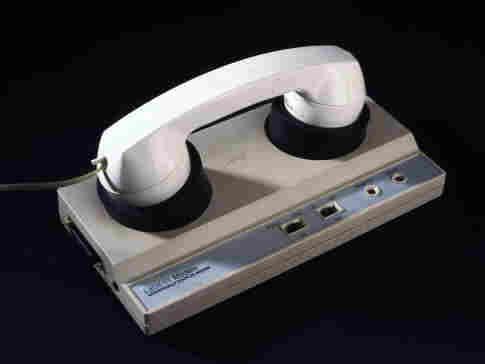 A modem from the '80s. Getty Images hide caption

These days, if you want to find a fling, a friend or a cheap used sofa, you might check out craigslist. But decades before Craig Newmark posted his first list, computer users all over the country were connecting through electronic bulletin boards.

Bulletin board systems — or BBS — were born in Chicago in 1978. Eventually, there were more than 100,000 of them across the country, a precursor of today's World Wide Web.

Tom Jennings was one of the earliest users, back in the 1970s. He describes BBS as sort of like a corkboard at the supermarket entrance. "You know, you've got a barbecue for sale? You put a 3-by-5 card with a description and your phone number, and you tack it to the wall," Jennings says. "And there's a whole collection of these things. It's a form of social commerce."

In the 1970s and '80s, you had to be at a university or a big corporation to have Internet access, but the boards were there for everyone. A lot of them were run by basement hobbyists with a computer and an extra phone line. If you had a phone and a modem, you could dial into a BBS and connect to a vast world outside.

"Any fool with a thousand bucks to put a machine together could be on the Net," Jennings says. "You didn't have to go through layers of academic or corporate access. So bulletin boards were wild and woolly." At first the domain of computer enthusiasts, the BBS expanded to cover a host of topics: sports, fantasy gaming, hobbies and, of course, sex.

Jennings went on to develop FidoNet, a way of letting individual boards connect with each other. FidoNet became one of the first strands in the World Wide Web — a development that eventually did in the traditional dial-up BBS.

These days, it's hard to find an old-fashioned dial-up BBS. Most of them disappeared in the mid-1990s, or transformed themselves into Web sites. But there are a few still out there for the dedicated user.

Michael Powell runs the Capitol City Online BBS from his home in Kentucky. He says most people who dial in do it for the nostalgia value. "Usually they'll compliment me on keeping it going," he says. "It's nice to know they appreciate that, and it's nice that I'm still here to provide that for them."