Accessibility links
'Emancipation,' A Story Of European Jews' Liberation Europe's Jews began to fight their way out of the ghettos during the tumult of the French Revolution. It's the focus of Michael Goldfarb's new book, Emancipation: How Liberating Europe's Jews from the Ghetto Led to Revolution and Renaissance. Guy Raz talks with Goldfarb about how that liberation paved the way for thinkers like Marx, Freud and Einstein.

Europe's Jews began to fight their way out of the ghettos during the tumult of the French Revolution. It's the focus of Michael Goldfarb's new book, Emancipation: How Liberating Europe's Jews from the Ghetto Led to Revolution and Renaissance. Guy Raz talks with Goldfarb about how that liberation paved the way for thinkers like Marx, Freud and Einstein.

Welcome back to ALL THINGS CONSIDERED from NPR News. I'm Guy Raz.

Shortly after the Jewish New Year in 1743, a desperately poor but academically gifted young boy named Moses Ben Mendel(ph) left the German village of Dassow and headed northwest to Berlin. After a few days trudging through the autumn mud, young Moses arrived in the Prussian capital.

Mr. MICHAEL GOLDFARB (Author, "Emancipation: How Liberating Europe's Jews from the Ghetto Led to Revolution and Renaissance"): (Reading) Moses Ben Mendel of Dassow found his way to the Rosenthaler Gate where a representative of the Jewish community decided whether to allow him to remain. And most poor young Jews turning up there were given a bowl of soup, a place to sleep for the night and then sent on their way the next morning.

But when interrogated by the Jewish guardian of the gate, Moses of Dassow had the right name to drop - Rabbi Frankel. So, the rabbi vouched for him and he was allowed in. The gatekeeper's log book for the day notes that at the Rosenthaler Gate, six oxen, seven pigs and one Jew entered the city.

RAZ: That's Michael Goldfarb reading from his new book, "Emancipation." It covers a period of time - from the French Revolution to the early 20th century - during which Jews were granted full social and civil rights in most of Europe. Moses Ben Mendel would eventually become the influential German Jewish philosopher known as Moses Mendelssohn. He is one of dozens of European Jews profiled in the book.

And many of you listening will no doubt recognize the voice of the author, Michael Goldfarb. For many years, he was NPR's correspondent in London. He's now an independent journalist and author. And Michael's with us.

Great to have you.

Mr. GOLDFARB: Thanks, Guy. Glad to be here.

RAZ: The story of Moses Mendelssohn is in some ways the story of how the Jews of Europe went from mostly living in ghettos to achieving incredible prominence in the arts and literature, academia, science, in the span of a few generations.

Mr. GOLDFARB: Yeah, it was a surprise to those who lived through it. The story really is about people who had been ghettoized, legally segregated, for the best part of half a millennium, and then overnight effectively were told, okay, well, now you can be French or now you can be German or whatever, and the process of coming out of this segregation and how it affected the community, but also how it affected the wider society.

RAZ: Michael, tell me how the idea of Jewish emancipation came about. When did it begin?

Mr. GOLDFARB: Well, it grew sort of organically out of the political theorizing that underpin the enlightenment. As the enlightenment went from its theoretical phase to its political phase with the French Revolution, there was the question of the Jews. What do we do with this religious and ethnic minority - Jews were seen as an ethnic minority at the time - in our midst?

And in France, where everything was up for discussion, people became, seems to me, kind of obsessed with the Jewish question. What do we do with them? Liberty, equality, fraternity. If all men are brothers, does that mean the Jews too? And the answer, as it was worked out in the constitution-writing phase of the French Revolution, was yes. And the changes that came out of that were phenomenal.

RAZ: And this is really the first time in European history when Jews are essentially emancipated.

Mr. GOLDFARB: Exactly right. There had always been business done, but now there was a challenge to their identity. And they were the first group, I think, in modern history to face, you know, questions that, you know, I think are part and parcel of the American experience for each new immigrant group that arrives. You know, am I an American? Am I Italian? Am I an American? Am I Mexican?

We've invented the hyphenate - you're a Mexican-American, you're a Jewish-American. In Europe, that wasn't quite the way things went.

RAZ: As you write, this all really begins during the period of the French Revolution and then is sort of unleashed by Napoleon. What was his motivation? Why was Napoleon so interested in granting the civil social rights to Europe's Jews?

Mr. GOLDFARB: Initially, when Napoleon went off over to the Alps into Italy -this is the first place he went outside France - he was bringing the ideals of the French Revolution to the peoples of Italy. By the time he became an egomaniac, motivations changed.

And there's a conversation recorded by his physician on the island of St. Helena where he was in exile - his final exile, said, well, you did many good things for the Jews. Why? And he said, what I wanted them to do was regard France as their country, and I wanted to attract their talents to France.

RAZ: Michael, there's a quote in your book from Isaac D'Israeli. He was the father of Benjamin who would go on to become the first and, I believe, only Jewish prime minister in Britain - he had already converted to Christianity at the time, but he was born Jewish. And Isaac D'Israeli says that essentially between the Babylonian exile and the time when Europe began to grant these rights to Jews, that he could count - this is a quote - all the Jewish men of genius or talent on his fingers.

But then, of course, this starts to change rapidly at the end of the 18th century.

Mr. GOLDFARB: Yes. I think that what happened was unimaginable tensions, the first really great genius of the emancipation era is Heinrich Heine�

Mr. GOLDFARB: The German poet and author, Heinrich Heine. Here was a man who was completely self aware of his dilemma. He was a law student at the same time he was becoming the most famous young poet in the German language. Because his family said to him, you know, well, look, you've got to get a law degree 'cause the writing thing may not last.

And it was like, you know, as if Bob Dylan, when he writing "Blowing in the Wind," was also going to NYU School of Law. It was a very weird time. When he finished his law degree, in order to practice law or to teach law, he had to be a Christian. And his family said, go ahead, it's all right with us, convert. We know what's in your heart. Convert, get the job. And�

RAZ: And that was very common.

Mr. GOLDFARB: It was very common. And he resisted it for a long time. In the end, he did convert and he spent the rest of his life regretting bitterly having done it. The point I'm making is that the tension between coming out of some way of life, very rigid, religious, looking inward life, and then suddenly not having that anymore but not being accepted by the majority was, for many people, almost impossible to bear.

And Heine was blessed with talent to try and work things out through this writing. Other people did other things. I mean, I think that one of the reasons that so many of the early theorists of modern socialism and communism were Jewish is they came from the same social class as Heine. Moses has Karl Marx and so on, Ferdinand Lassalle - and they too wanted to reshape Europe so that the words of equality and fraternity were more than a slogan.

RAZ: Michael Goldfarb is the author of "Emancipation: How Liberating Europe's Jews from the Ghetto Led to Revolution and Renaissance.

Michael, thanks so much for joining us. 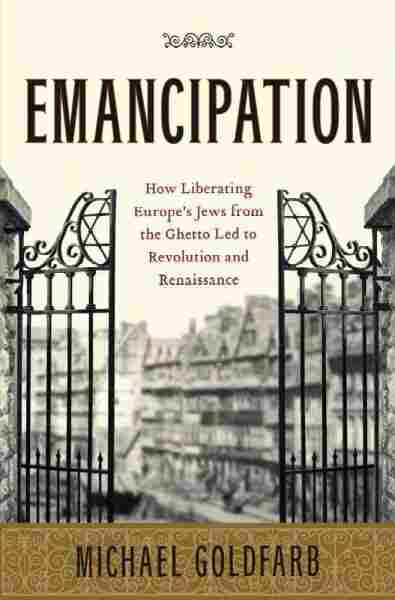