Accessibility links
Gigantic Cruise Ship Buoys Company's Hopes We're headed into the year's biggest travel week, and there's not much bigger than what's sitting in the port of Fort Lauderdale, Fla., right now. It's called the Oasis of the Seas, and it's the largest cruise ship ever built — five times the size of the Titanic, with a price tag of $1.5 billion. 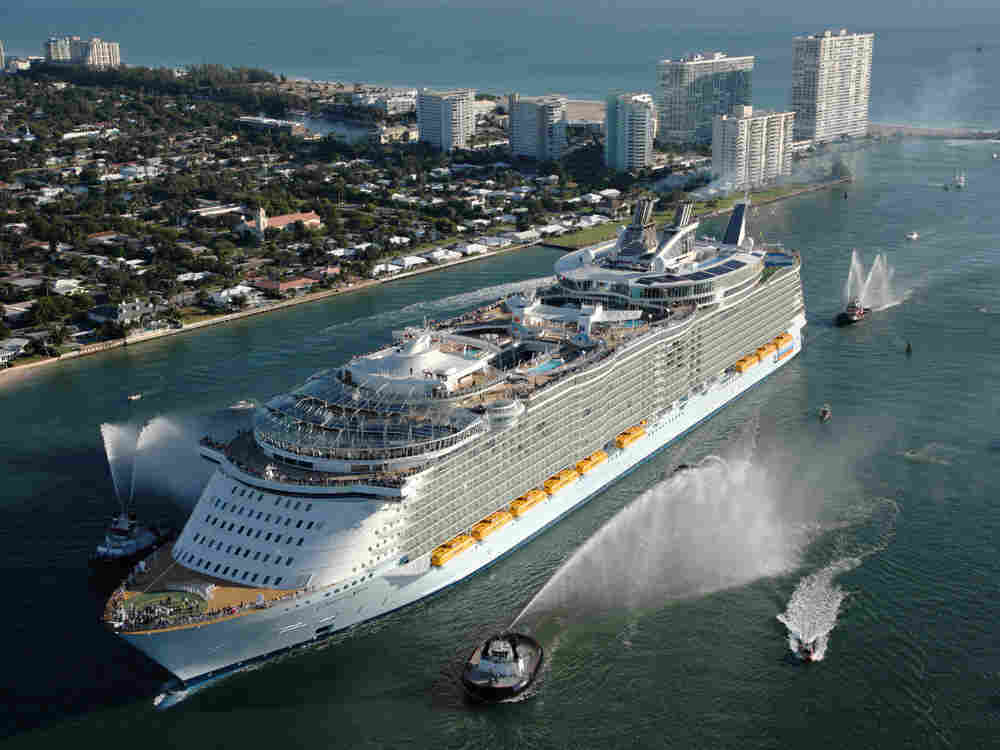 The Oasis of the Seas is five times the size of the Titanic and has room for 6,300 passengers. Courtesy of Royal Caribbean hide caption 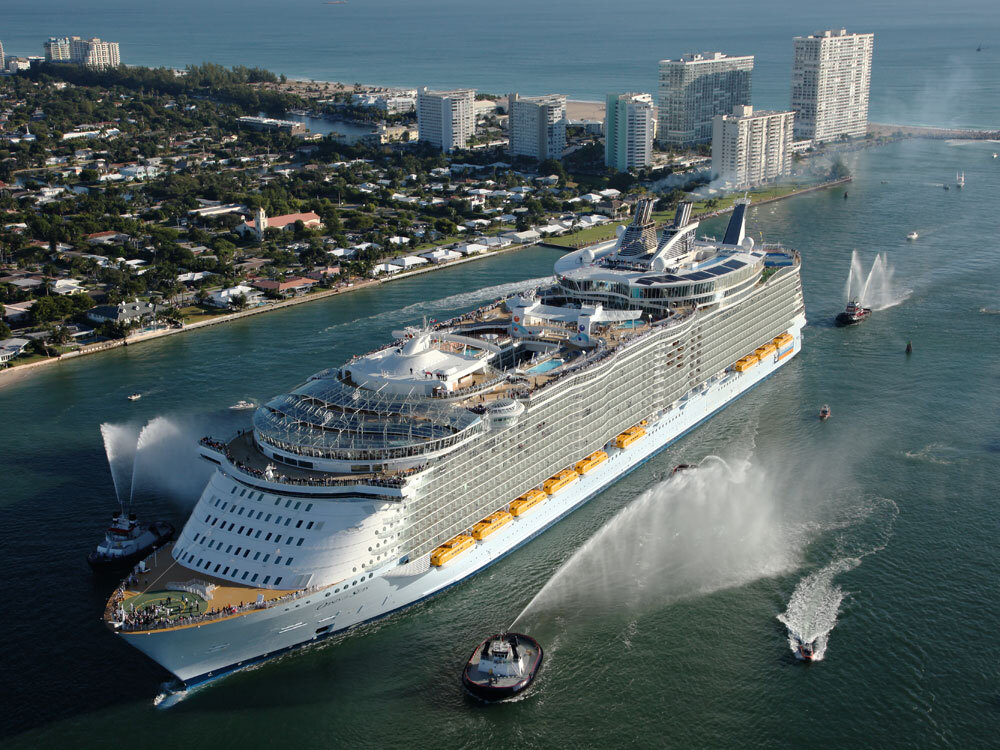 The Oasis of the Seas is five times the size of the Titanic and has room for 6,300 passengers. 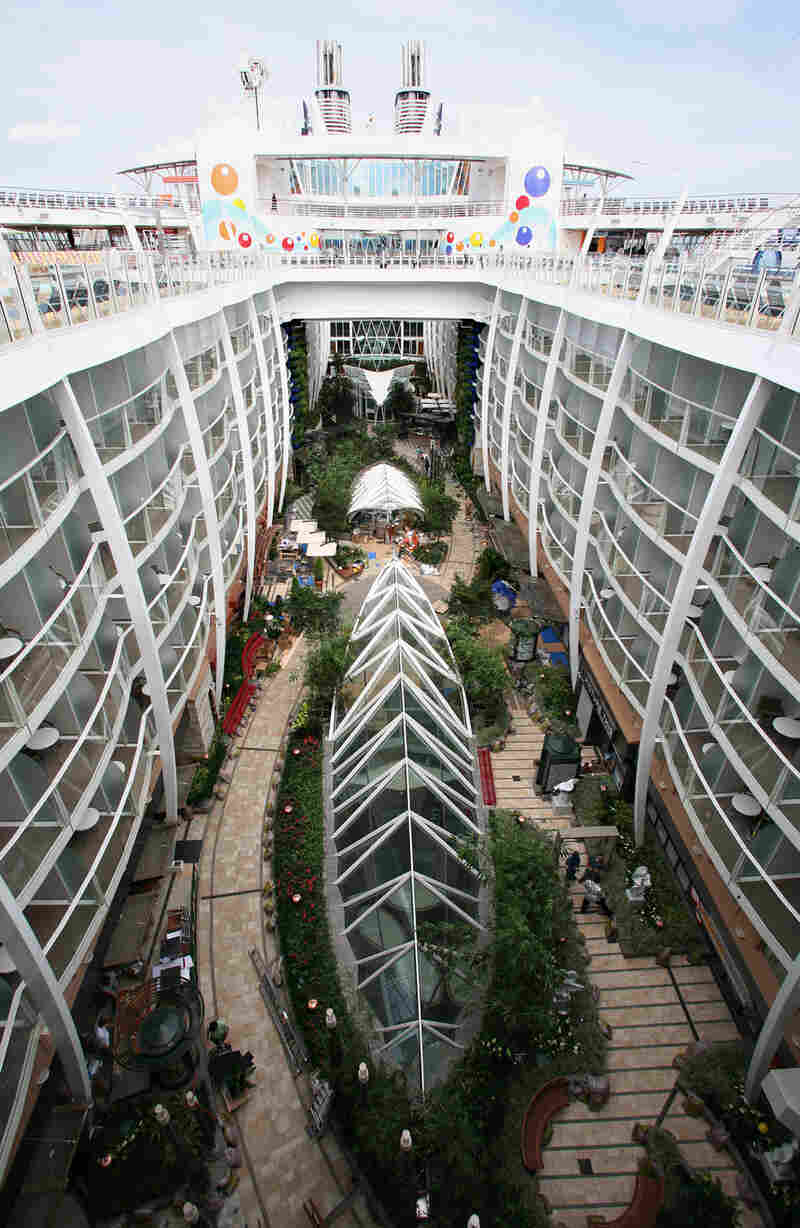 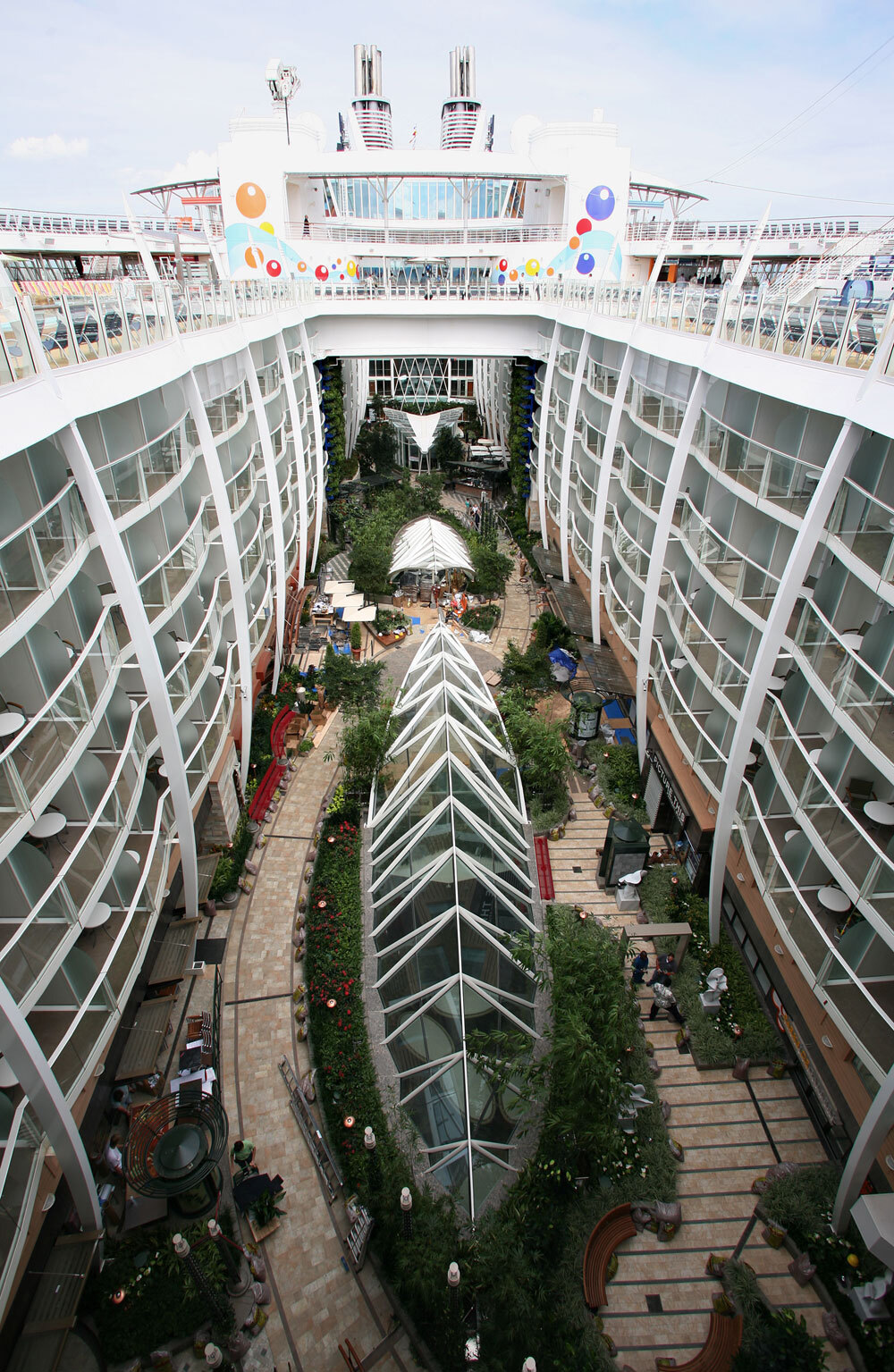 "Central Park," one of the Oasis' seven "neighborhoods," contains more than 12,000 live plants and trees.

We're headed into the year's biggest travel week, and there's not much bigger than what's sitting in the port of Fort Lauderdale, Fla., right now. It's called the Oasis of the Seas, and it's the largest cruise ship ever built — five times the size of the Titanic, with a price tag of $1.5 billion.

That's a lot to gamble in the middle of a cruise industry slump. Royal Caribbean, which commissioned the Oasis, has seen its sales drop by 15 percent from last year.

The Oasis is the first ship to offer two-story, loft-style cabins priced as high as $34,000 per week. It has room for 6,300 passengers. Royal Caribbean CEO Adam Goldstein says it's not just about being big; it's about giving the guests more options — in dining, recreation, even cabins.

"What guests are telling us is they want the variety and choices," he says. "That way, nothing is regimented, and they can choose the vacation that works best for them."

Almost as massive as the ship itself is the amount of buzz Royal Caribbean has created. Travel agents, cruise blogs and cruise fans have been able to follow the ship's progress from construction to its maiden voyage across the Atlantic in video posted on a special Web site. There was a live broadcast on Good Morning America and mentions on The Jay Leno Show and Saturday Night Live.

"We've all been so excited," says travel agent Melodie Williams of Knoxville, Tenn. "We really have. I think it's just going to be something people can't even imagine until they walk on board."

Williams was one of the travel agents on board for a complimentary outing last week before the ship sets sail with paying passengers next month.

While the Oasis of the Seas is taller than other ships, most of its size comes from its width. Building it wider than any other passenger vessel allowed designers to open up the ship's interior with a huge atrium. Another innovation, according to Royal Caribbean Vice President Ken Muskat, is a design concept that creates seven different "neighborhoods" aboard the ship.

The "boardwalk" neighborhood is intended to offer a Coney Island kind of experience, Muskat says, as he walks through it. "We have the ice cream shop, we have the doughnut shop, we've got a beautiful, life-size carousel with all these horses and tigers and rabbits." Those animals were hand-carved for the ship, he adds.

A person flies overhead as he talks. "We actually have a zip line," he says. "Nine stories up."

Another neighborhood is an entertainment zone, with ice shows, a jazz club and a 90-minute production of the Broadway show Hairspray. But the most impressive neighborhood might be Central Park — a large, landscaped garden, including trees, surrounded by shops and restaurants. It's easy to forget that you're actually on a ship.

It's part cruise ship, part theme park. For many cruisers, it's the ship, not the Caribbean ports it visits, that will be the destination.

In fact, only a handful of ports in the Caribbean are large enough to handle the Oasis and its sister ship, Allure of the Seas, set for delivery next year. 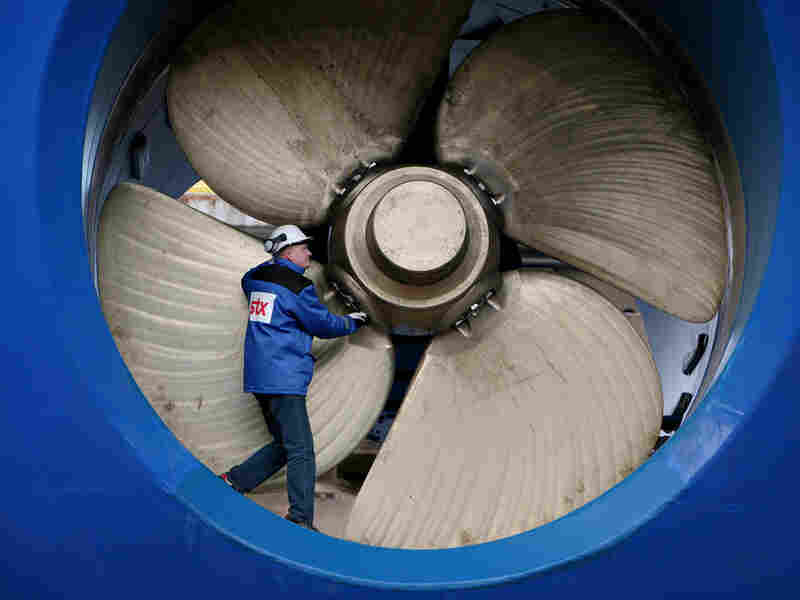 A shipyard worker inspects one of the ship's bow thrusters before the launch. Courtesy of Royal Caribbean hide caption 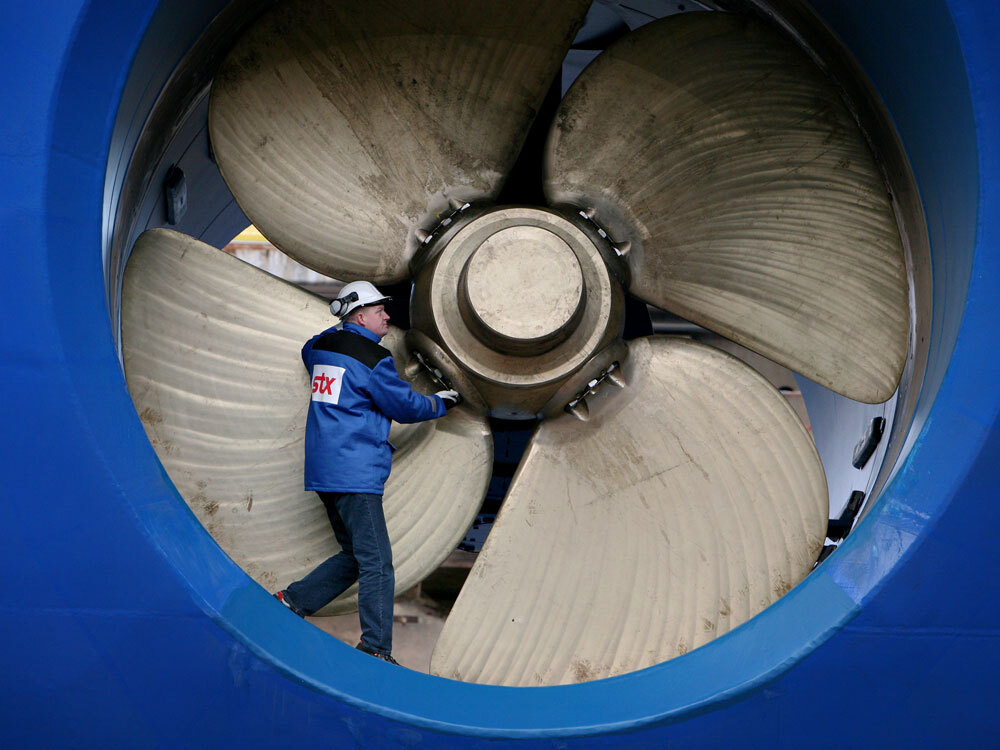 A shipyard worker inspects one of the ship's bow thrusters before the launch.

Royal Caribbean began planning the new mega-cruise ships some six years ago and had not anticipated taking delivery during a major recession. Goldstein says there was never any question about delaying the ship's construction and delivery.

"This is going to be the mainstay of our asset bases for a long time. So, we're very optimistic generally about the business we're in, and specifically about the performance of Oasis of the Seas."

It's a pricey ticket; the least expensive starts at $1,200 per person per week. But travel agents say there's a lot of demand for reservations, with some weeks and rooms in 2010 already in short supply.

Royal Caribbean says it already sees reservations rebounding from last year's lows — up 40 percent since September. It's a trend the company hopes to keep afloat.