Accessibility links
Chicago Teens Encourage Nonviolent Actions The brutal killing of a Chicago teenager in September brought U.S. Attorney General Eric Holder and Education Secretary Arne Duncan to the city to speak out about youth violence. Now that the Cabinet members are back in Washington, what is happening in the effort to stop youth violence? Some Chicago teenagers are taking on the issue themselves. 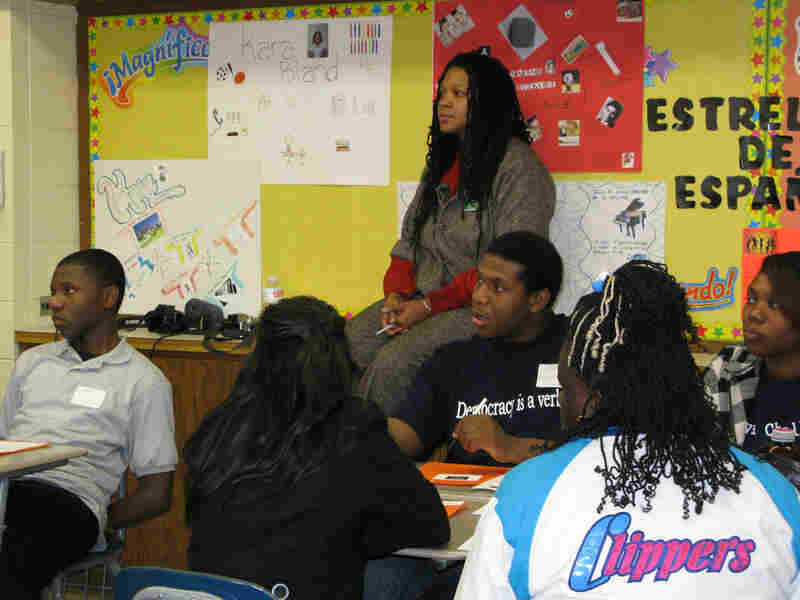 Chicago public high school students learning peace and non-violence strategies to take back to their schools in a recent workshop. After a string of beatings and deaths in the city, officials across the nation are calling for action to combat student violence. David Schaper for NPR hide caption 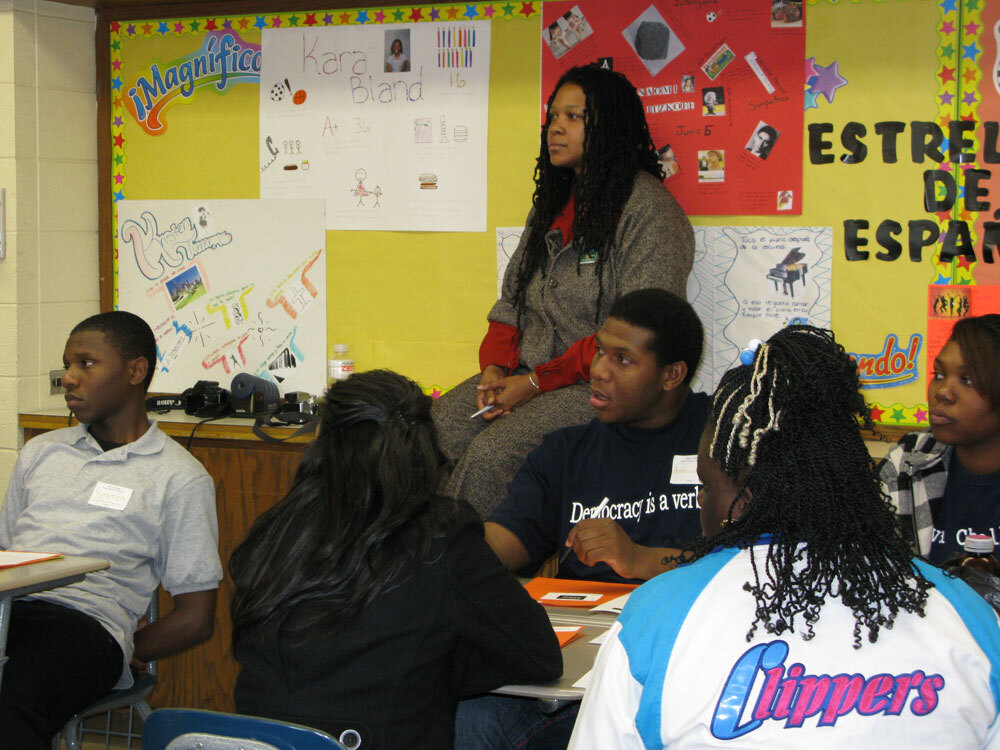 Chicago public high school students learning peace and non-violence strategies to take back to their schools in a recent workshop. After a string of beatings and deaths in the city, officials across the nation are calling for action to combat student violence.

In Chicago, the problem of youth violence is difficult to escape or ignore. After the highly publicized beating death of a Chicago teenager in September, U.S. Attorney General Eric Holder and Education Secretary Arne Duncan visited the city and called for a national conversation on youth violence.

More than a month later, Chicagoans are talking. Some teens are spending long hours strategizing about how to stop violence, but still others voice frustration over attacks that remain a constant in their lives.

In an alley on Chicago's northwest side, two teenage friends are playing around on bikes. Just about 36 hours earlier, a few feet away, a 15-year-old boy who police say admitted to being a gang member was shot and critically wounded.

"I heard the gunshots, but I honestly ignored them," says 17-year-old Eduardo Medina. He often hears gunshots in this part of the racially and economically diverse Albany Park neighborhood.

"I'm practically at risk for violence practically every single step I take in this neighborhood," adds Medina. "I'm not safe at all."

Medina and his friend Eric Correa say they're cautious, but they don't want to be too cautious — after all, they're teenagers and want to be able to enjoy an unseasonably warm afternoon like this one.

"You can't really get used to the violence," says Medina. "You have to adapt to the environment that you live in, because you can wish so much that the violence would go away and the gangs would go away, but they are just another pest."

Since the shooting, police say they've beefed up patrols in this neighborhood. And across the city, there is now a much greater police presence at Chicago high schools at dismissal time.

Chicago Public Schools officials are putting more resources into ensuring "safe passage" for students to and from school. A new program identifies the students most at risk for becoming a victim or perpetrator of violence, and provides them with mentors, counseling and jobs.

There appears to be a new urgency to addressing youth violence in Chicago. Since 16-year old Derrion Albert was killed in an after-school street fight, there have been peace summits, town hall meetings, panel discussions and forums.

Some high school students are taking on youth violence themselves. A South Side high school classroom is full on a recent day off from school.

Teenagers from all over Chicago got up early for this Youth Activism conference, gathering for discussions and workshops, some of which were aimed at giving them tools to be peacemakers in their schools and communities.

Leading a session called Peace Strategies, community organizer Justin Richardson tells the students that rather than accepting the violence all around them, they should start doing something about it, using nonviolent strategies.

Richardson also shows them how to better recognize the types and levels of conflict. Understanding how conflict starts can help them keep the peace, he says.

"It's gonna take a lot of work," says 18-year-old Armani Bell. The senior at Wendell Phillips High School in Chicago is one of several students who called the workshop worthwhile.

"It all starts on the street," says Bell. "You might have a couple of kids who [are] not having a good day, and they come at you and they be saying, 'You bump me on purpose.' They don't let stuff go, and that's something that kids will have to work on, including myself. Kids will have to work on that and learn how to work their problem out instead of just fighting."

But even the organizers caution that a couple of hours in a workshop won't suddenly make these teenagers superheroes who can stop every fight they see.

Jaime Arteaga is with a Chicago-based group called the Mikva Challenge, which works to increase teenage civic involvement. He says it will take much more than a visit from the attorney general and education secretary to bring change.

Arteaga adds that the solutions must involve the young people who live with this pervasive level of violence every day.