Accessibility links
'Teach For America' Teachers Learn On The Job New science teacher Tim Cooper trained with Teach For America for five weeks before flying solo in the front of his own classroom. Cooper couldn't wait to get into the classroom, so the group's short but intense training program working for him. 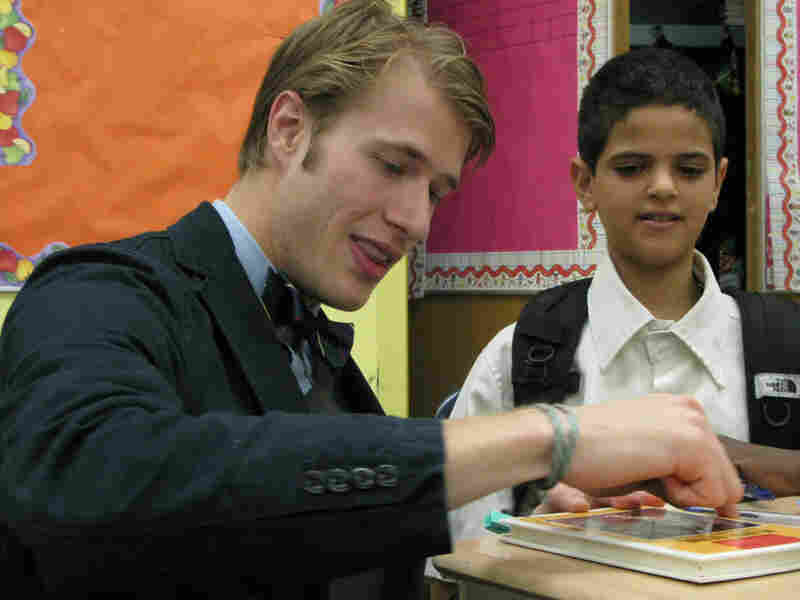 Cooper relies heavily on the many mentors and advisers the program and the school provide. Larry Abramson/NPR hide caption 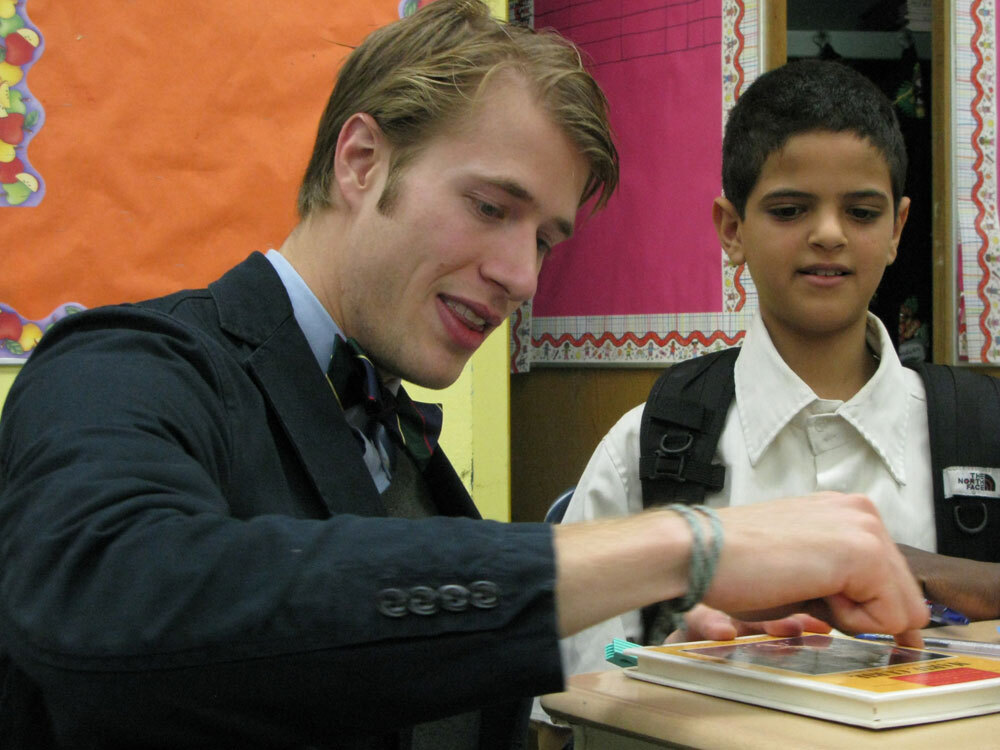 Cooper relies heavily on the many mentors and advisers the program and the school provide.

New science teacher Tim Cooper trained for a grand total of five weeks before flying solo in the front of his own classroom at Isaac Bildersee Middle School in Brooklyn, N.Y.

The Ohio native Cooper received his training from Teach For America, which recruits and places new teachers in underserved American public school systems. The short but intense training program wrapped up in August; now that he's in the classroom, he's learning on the fly.

And that's how TFA is supposed to work — Cooper learns on the job. He relies heavily on the many mentors and advisers the program and the school provide.

Isaac Bildersee Principal Alex Fralin says that new teachers like Cooper have the toughest time with classroom management. Cooper has developed his own elaborate system of punishments and rewards: When kids pay attention, he hands out tickets redeemable for a pizza party or some other treat. He got this idea by observing other teachers.

First year of Teach For America: 1990

Age that founder Wendy Kopp was when she created TFA: 21

How many plan to add over the next five years:

Corps members in its first year: 500

Percent that were from Ivy League seniors: 11 percent

Teach For America is extremely popular right now. The organization reports rapid growth in applications from recent college graduates, eager to devote at least two years of their lives to teaching. The program's goal is to send the most promising, idealistic young people into some of the nation's toughest schools. And it's highly selective. This past year, the program only had space for one out of seven applicants. And TFA only takes on people who can work independently.

Aylon Samoa, who manages the training program, says the 5-week course that TFA teachers go through might not be enough for everyone.

"This system is probably more set up for folks who are high-achieving, who can take challenge really well, and won't fold," Samoa says.

TFA teachers all have different stories about how they go to the program. But most had a kind of epiphany that led them to take on this very tough job. After studying biology at Denison University in Ohio, Cooper worked in a biomedical lab for a couple of years. Then he worked in the Ohio state senate. All along, he felt the draw of teaching. TFA's quick path to the classroom spoke to his desire to get to work.

"And for me the choice was: I want to get into the classroom and I want to do it now," Cooper says. "When I was working in the Ohio state senate, I saw firsthand, I had kids coming in saying they hadn't had a proper science teacher in four years. It floored me! I was like, I can't wait for two years to get a Masters and then get into a classroom."

Now that Cooper is here, the big question is: Will he stay? Teach for America only requires a 2-year commitment. But the organization has been working on that weak spot and says that two-thirds of all corps members have remained in education. Cooper say he's can't say for sure what he'll do in the future, but he says he is committed to teaching.

Fralin says he'd never hired a TFA teacher before Cooper because retaining teachers is so important to him.

"I really look for a 3-year minimum from anyone, particularly from new teachers because we spend so much time and so much money on their growth and development," Fralin says.

Others are concerned that TFA has created unrealistic expectations for schools and school systems.

Ric Hovda, dean of the education school at San Diego State University, says he can't afford to recruit the way TFA can. TFA, for example, conducts face-to-face interviews at schools around the country.

"Multi-millions of dollars, most of them private dollars, are supporting Teach For America work. Not to discount what it is that they have accomplished, but it hasn't been without financial support above and beyond what would typically be given to any other education enterprise," Hovda says.

So, TFA may not hold the solution for reforming teacher education nationwide. But for individual schools and for individuals like Cooper, it's a nice fit.