Accessibility links
Larry David's Dysfunctional Family Reunion The seventh season finale of Curb Your Enthusiasm capped a year-long storyline about Larry finally agreeing to a produce a reunion episode of Seinfeld which he co-created with Jerry Seinfeld. TV critic David Bianculli explains how both programs — the show and the show within the show — were a comedic coup and a perfect end to the season. 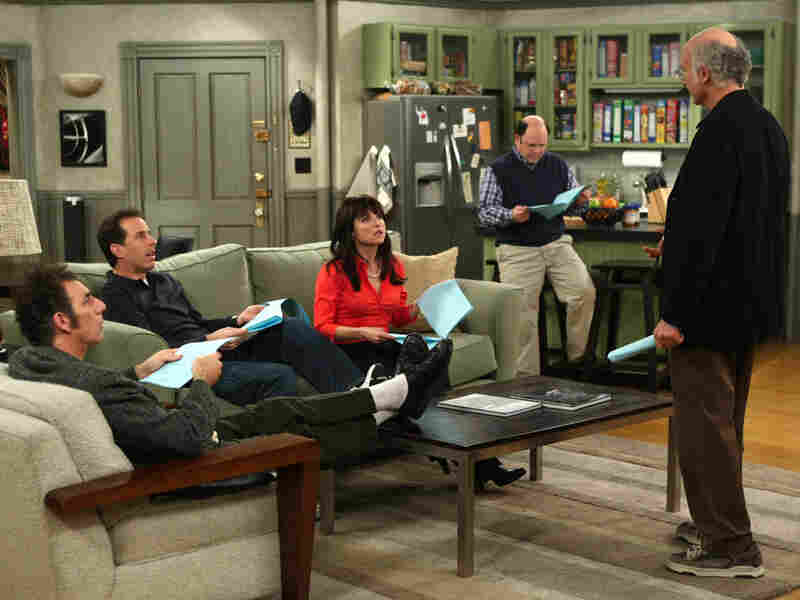 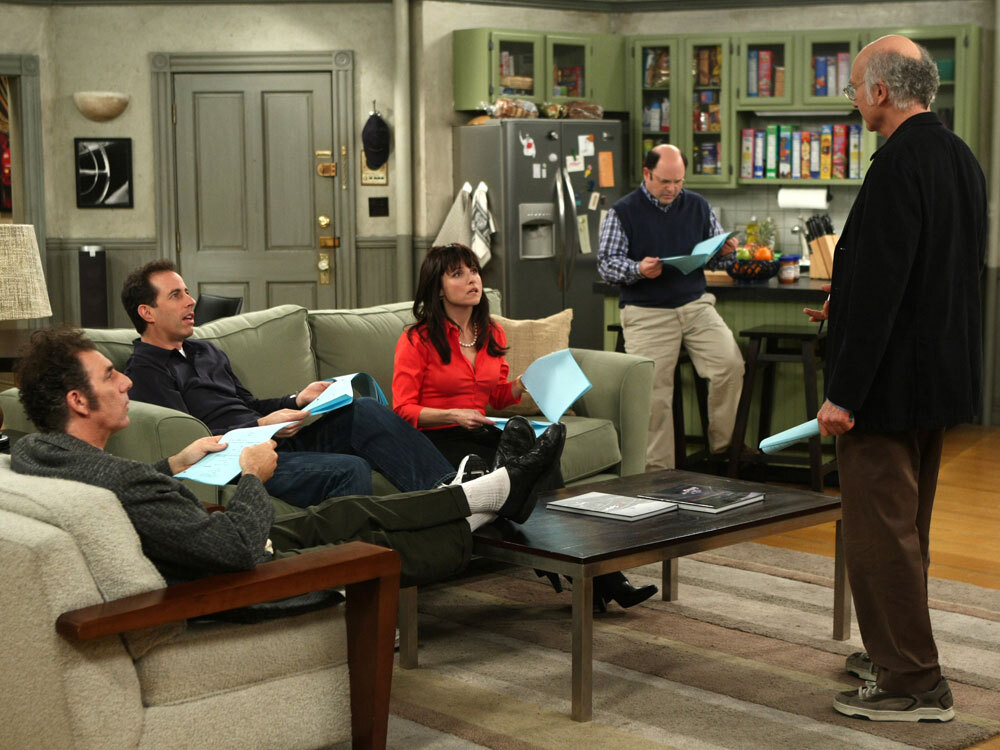 Only Larry David could have gotten away with what he just pulled off on Curb Your Enthusiasm. That's not just praise for his ability as a brilliant sitcom writer and improviser — it's also a plain fact. After Larry and Jerry Seinfeld ended Seinfeld when it was the top-rated show on television, Larry, the behind-the-scenes co-creator, went out on his own. He created Curb, playing an exaggerated version of himself: Larry David, the guy who co-created Seinfeld, made skillions of dollars, but still found endless irritations in everyday life.

He was the first of the Seinfeld gang to succeed in a new venture, and the premise set him up, years later, to attempt the unthinkable: to bring everyone back for a Seinfeld reunion show. He and Jerry would never think of doing it for NBC, their old bosses, for real. That would be too ordinary. But to do it for HBO, as part of a complicated plot that has the TV Larry agreeing to do an NBC reunion special only so he could get back together with his estranged wife — that's not only different. It's perverse.

With the old Seinfeld sets pulled out of storage, and the old cast members reunited, this entire season of "Curb" has been a flirtation with this alternate reality. And like some not-quite-real Bizarro world — a Superman reference the real Jerry Seinfeld no doubt would appreciate — the whole thing came to a head this weekend, when HBO bought ad time to promote — during NBC's Saturday Night Live — the Curb season finale.

Think of how much salt HBO was rubbing in NBC's wounds with that ad. Eleven years ago, Seinfeld was the hugest thing on TV, and NBC had it. But in 2009, the Seinfeld cast reunited on cable TV instead, while NBC's peacock has so little plumage left, it's in danger of being killed at and served at Thanksgiving.

But the amazing thing about this Curb-Seinfeld combo platter is how beautifully everyone delivered. Jerry and Larry worked together brilliantly, and you could actually sense the chemistry that made them such a creative team. Julia Louis-Dreyfus, who's doing her own stellar sitcom work on The New Adventures of Old Christine for CBS, was a riot as an older but still not wiser Elaine. Michael Richards, banished to show-biz limbo after his racist rant three years ago, allowed himself to be the butt of jokes on that very topic. And Jason Alexander, as Larry David's alter ego George Costanza, had an obvious ball portraying himself as someone who didn't like Larry all that much — and certainly didn't care for the original Seinfeld finale.

Slowly, over several episodes, the Curb version of the Seinfeld reunion began to take shape. Larry had to overcome several obstacles, but finally succeeded in casting his estranged wife Cheryl, played so endearingly by Cheryl Hines, in the show. That's the clever plot of Curb — but the plot of Seinfeld, the reunion show, was just as good. When we got to see all the actors at what's called a "table read" — the first pass at reading aloud a new script — what I was knocked out by was how well-written it was.

The reunion show plot, filling in the lives of the characters over the intervening years, had George marrying Amanda — the character to be played by Cheryl — becoming a mega-millionaire after developing a particularly useful i-Phone application, then divorcing Amanda and losing his money to Bernie Madoff. The table read, with Jason Alexander as George and Cheryl Hines as Amanda, made it clear: This would have made a terrific episode of Seinfeld. For real.

And then, last night, came the capper. I thought Larry David had reached his career peak with the season-long Producers story line of Curb, but last night's show was even better. It actually gave us, in miniature, another episode of Seinfeld. But it also gave us happy endings, and unhappy ones, when we didn't expect them — and also served up the delicious plot twist that had Cheryl becoming attracted to Jason. That meant Larry was competing with, and losing to, the guy who played Larry's doppelganger on Seinfeld — and he was losing her precisely because he cast her in the show. That's when, on this Curb season finale, Larry flips, Jason walks out, and to save the reunion show and his chances with Cheryl, Larry offers up a desperate solution, which the other cast members reject immediately. Jerry Seinfeld especially.

Actually, by this point, they're all icons — even Larry. Curb Your Enthusiasm is the best comedy of the year, and last night's finale didn't let me down. It lifted me up. And the fact that the Seinfeld reunion took place on cable, not broadcast, TV — well, that's a perfect analogy for quality TV as it exists today. More and more, cable TV is where it's at. Broadcast TV is where it was.

David Bianculli writes for TV Worth Watching and teaches TV and film at Rowan University.