Accessibility links
In Japan, 'Herbivore' Boys Subvert Ideas Of Manhood The sensitive New Age man has finally arrived in the land of the salaryman. Known as "herbivores," these Japanese men are drawn to a quieter, less competitive life. But their lack of interest in sex is a worry in Japan, where the declining birthrate is causing alarm. 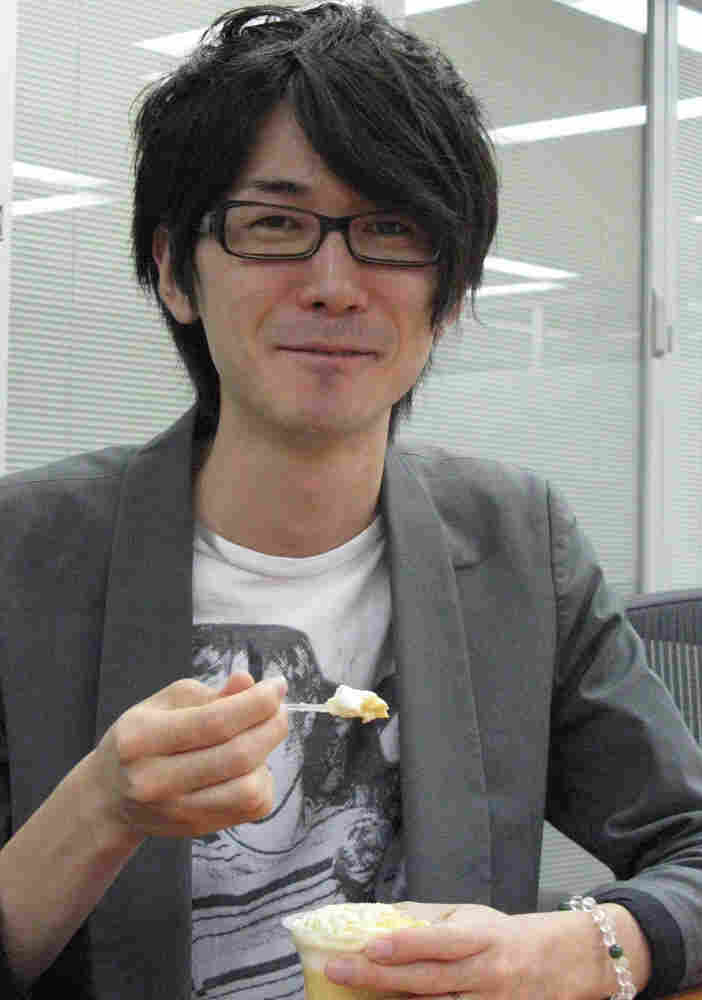 Yasuhito Sekine is a member of a new generation of mild-mannered, sensitive Japanese men known as "herbivores." He runs an online dessert club for men — something he says would have been unthinkable 20 years ago. Louisa Lim/NPR hide caption 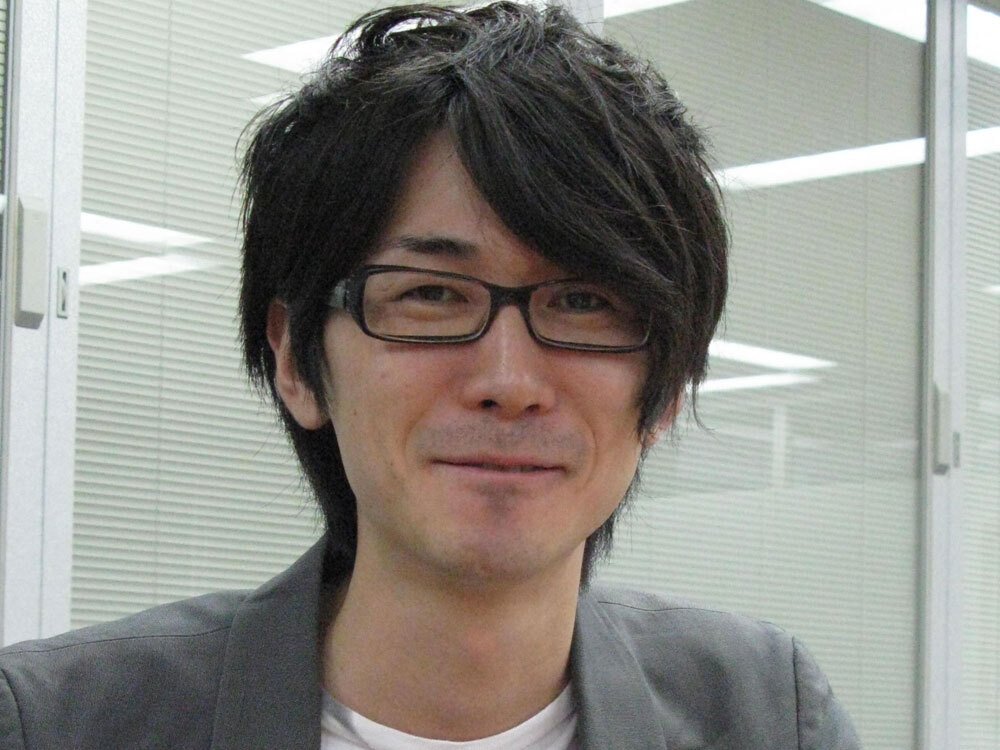 Yasuhito Sekine is a member of a new generation of mild-mannered, sensitive Japanese men known as "herbivores." He runs an online dessert club for men — something he says would have been unthinkable 20 years ago.

The sensitive New Age man has finally arrived in the land of the salaryman. But there is a catch — a particularly important one in Japan, where the declining birthrate has caused alarm: The new Japanese man doesn't appear to be interested in women or sex.

In Tokyo on the weekends, the trendy area of Harajuku is a melting pot of urban tribes: Lolita goths bat their fake eyelashes, while the punks glower.

Away from the strutting are the retiring wallflowers, a quiet army of sweet young men with floppy hair and skinny jeans. These young men are becoming known as Japan's "herbivores" — from the Japanese phrase for "grass-eating boys" — guys who are heterosexual but who say they aren't really interested in matters of the flesh.

They are drawn to a quieter, less competitive life, focusing on family and friends — and eschewing the macho ways of the traditional Japanese male.

They include men such as Yukihiro Yoshida, a 20-something economics student, who is a self-confessed herbivore. "I don't take initiative with women, I don't talk to them," he says, blushing. "I'd welcome it if a girl talked to me, but I never take the first step myself."

Multiple recent surveys suggest that about 60 percent of young Japanese men — in their 20s and early 30s — identify themselves as herbivores. Their Sex and the City is a television show called Otomen, or Girly Guys. The lead character is a martial arts expert, the manliest guy in the whole school. But his secret passions include sewing, baking and crocheting clothes for his stuffed animals.

"I will hide my true nature," he vows in the first episode, as he sews secretly, shut away in his living room. "At all times, I will be a man — a real Japanese man," he says.

But what does that mean?

"It's not so much that men are becoming more like women. It's that the concept of masculinity is changing," says Katsuhiko Kokobun. From his perch at Guzzle, the popular Harajuku hair salon he owns, Kokobun is at the front line of the latest trends.

Over the years, he has seen more and more men coming into the salon — men who he describes as "more modest, less demanding, kind of passive; they accept what they're told." He's noticed that nowadays they're demanding more traditionally female treatments. "We do have eyebrow plucking and facials for men," he says, smiling. "Eyebrow plucking is very popular among high school boys."

It is, perhaps, no coincidence that Yasuhito Sekine's eyebrows are perfectly groomed. The changing tastes of Japanese men are quite literally what take up his days. He works for an Internet service provider and operates Sweets Club, an online group for men who like desserts. Set up in January, it already has about 1,000 members who congregate — online and in person — to debate the virtues of different brands of strawberry shortcake. It's something that Sekine says would have been unthinkable 20 years ago.

Back [in the 1980s], Japanese men had to be passionate and aggressive, but now those characteristics are disliked. Our members have very mild personalities. They simply enjoy what they like without prejudice. They are not limited by expectations.

"Back then, lots of men liked desserts, but it was considered uncool. Cool men had to like alcohol or spicy food. I've discovered my father likes eating dessert, but he never showed it in the past," Sekine says.

Put through his paces with an impromptu taste test, Sekine praises peach gelatin as fresh-tasting. He is not so keen on coffee gelatin with cream — a macho dessert if ever there was one — labeling it "retro." He believes his dessert club shows that young Japanese men are asserting their individuality, reflecting a change in values from Japan's booming 1980s.

"Back then, Japanese men had to be passionate and aggressive, but now those characteristics are disliked. Our members have very mild personalities. They simply enjoy what they like without prejudice. They are not limited by expectations," Sekine says.

Japan's top expert on herbivores, Maki Fukasawa, believes they were born from the lost decade of economic stagnation. She christened the tribe in 2006 and recently wrote a book called The Herbivore Generation, which breaks herbivores down into 23 distinct subcategories. She argues that the herbivores are rebelling against the salaryman generation of their fathers, consciously turning away from the macho mores and conspicuous consumption of that era.

"They have some feelings of revulsion towards the older generation," says Fukasawa. "They don't want to have the same lives. And the impact of the herbivores on the economy is very big. They're such big news now because sales are down, especially of status products like cars and alcohol."

She says the advent of the herbivores could bring positive changes. Herbivores may lack ambition, but they are driven by a strong sense of community and family, which she believes many of them lacked while growing up.

"In a sense, their fathers neglected their families. They were involved in Japanese-style salaryman lifestyles, going out with their bosses every night, while herbivores are closer to their families and friends," Fukasawa says.

But there are fears about the financial and social impact of herbivores. Their low levels of spending and lack of interest in sex invoke two of Japan's biggest problems: its lackluster economy and declining birthrate. Herbivores like to be friends with women — but for many, that's as far as it goes.

In the streets of Harajuku, Alex Fujita explains why he is not interested in taking it any further.

And, of course, there is a name, too, for the economically empowered working Japanese women who know what they want: the carnivore women. With herbivore boys and carnivore girls, it seems the land of samurai, sumo wrestlers and geisha girls is remaking its gender landscape anew.