Conductor Alan Gilbert this week added a major milestone to his resume: At 40, he's been chosen to become the New York Philharmonic's next music director — the first native New Yorker ever to hold the position. Gilbert, the son of two of the orchestra's musicians as well as its occasional guest conductor, will succeed Lorin Maazel beginning in 2009. 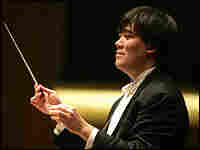 Alan Gilbert grew up with the New York Philharmonic in his blood. He is the son of two Philharmonic musicians: His father played violin with the orchestra for 30 years, and his mother is a longtime member of the first violin section.

Gilbert's childhood was filled with music and musicians.

"I was the 'little orchestra brat,'" he says. "I would accompany the orchestra on tours and I knew everybody's name so I would help hand passports out, things like that." He also recalls playing electronic football with Roland Kohloff, the Philharmonic's timpani player.

The grown-up Gilbert has a quickly rising career as one of today's most promising young conductors. Still in his 30s, he is the chief conductor of the Royal Stockholm Orchestra and music director of the Santa Fe Opera, and guest conducts with many major symphonies in the U.S. and abroad.

Gilbert has conducted the New York Philharmonic several times since 2001, and he just signed a three-year contract as one of the orchestra's regular guest conductors. That means he'll get to keep a sharp eye on his mother, Yoko Takabe, who sits not too far from the conductor's podium, in the first violin section.