Accessibility links
In Afghanistan, A Plan To Woo The Taliban The Afghan government and the U.S. military are pursuing an effort to lure low-level insurgents with job offers and other incentives, and split them from their Taliban leaders. In his second inaugural last week, President Hamid Karzai called on militants to lay down their arms and return to their homes. 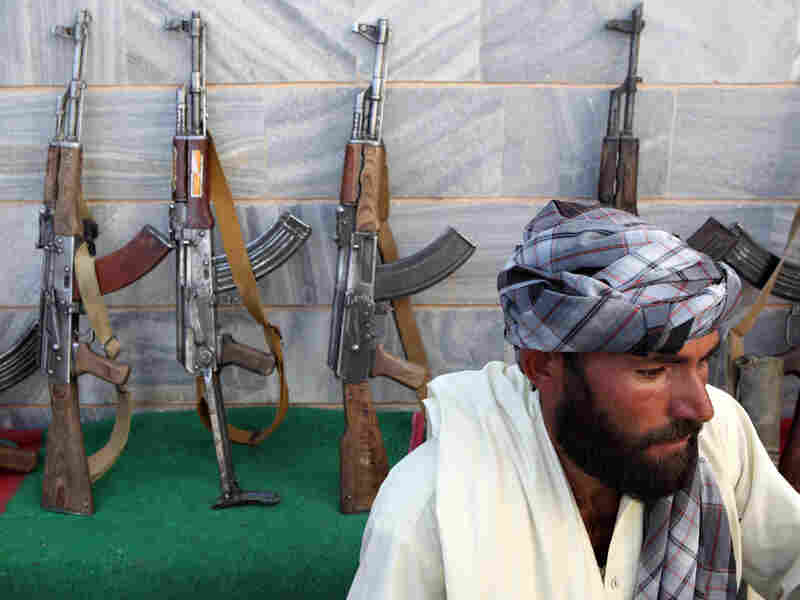 Taliban fighters lay down their weapons as they surrender to the government in Herat province on Oct. 14, 2009. Majid/Getty Images hide caption 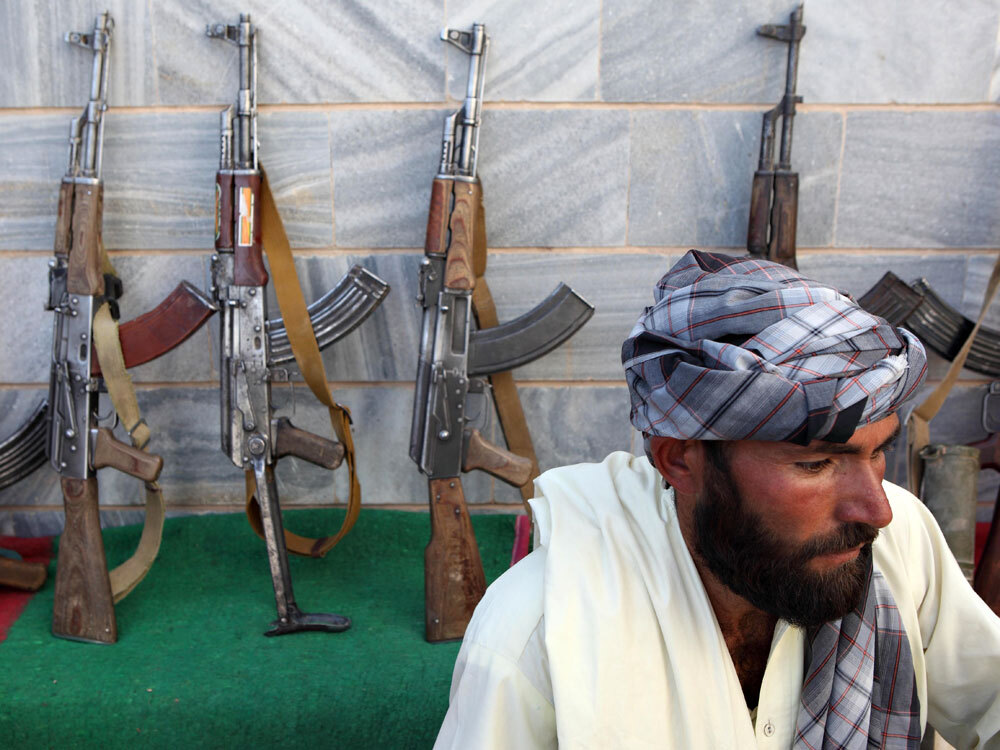 Taliban fighters lay down their weapons as they surrender to the government in Herat province on Oct. 14, 2009.

If you can't beat them, get them to join you. That's the idea behind a new effort by the Afghan government and the U.S. military to win over low-level insurgents and split them from their Taliban leaders.

Eight years have elapsed since the U.S. and other forces invaded Afghanistan and overthrew the Taliban government. This year, those forces suffered more losses than at any time since the conflict began.

Military measures have failed to stem a rising insurgency. So the Afghan government and its Western allies are exploring other ideas — including a grass-roots effort similar to the "Sons Of Iraq" program that wooed Sunni Muslims away from the Iraqi insurgency.

But Lamb says the two war zones are different.

"In Iraq, I had fighters on both sides. I had Shiite militia on one side, and I had Sunni insurgents on the other. Here, one seems to have this rather crude analysis where people talk about the Taliban as a single entity, which of course is a complete misunderstanding of those forces that are placed against us," Lamb says.

Lamb stresses that he has come to Afghanistan to assist President Hamid Karzai and his government, and that the Afghans are taking the lead on the initiative to lure insurgents with job opportunities and other incentives.

Last week, Karzai was sworn in for a second term. In his inaugural address, he appealed to militants to return home, renounce violence and accept the country's constitution.

Lamb says Karzai has long advocated reintegrating militants. "President Karzai, from his very first inauguration speech right till now, he's been absolutely consistent. We have not listened and worked out how we can support that intent," Lamb says.

When they go to war, governments use certain words to describe their enemies. They call them evil and describe them as fanatics, terrorists and criminals. When making peace, they must rehumanize their foes.

That's what Lamb does when he talks about low-level militants. Lamb says he believes most militants are not driven by ideology. Some fight because they believe foreign forces have come to occupy their lands forever, while others fight because of personal grievances.

"This was exactly the case in Iraq. They had personal grievances, where we had killed their families or their friends or their fathers or their brothers — whatever the case may be. What we needed to do was establish a point of dialogue," he says.

Afghans have a term for insurgents — "upset brothers" — words that Lamb particularly likes. "I think it is a very helpful term," he says.

On a recent afternoon, a small group of heavily bearded Afghan men awaits lunch in a run-down mansion in Kabul that is now the headquarters of Afghanistan's Peace and Reconciliation Commission. 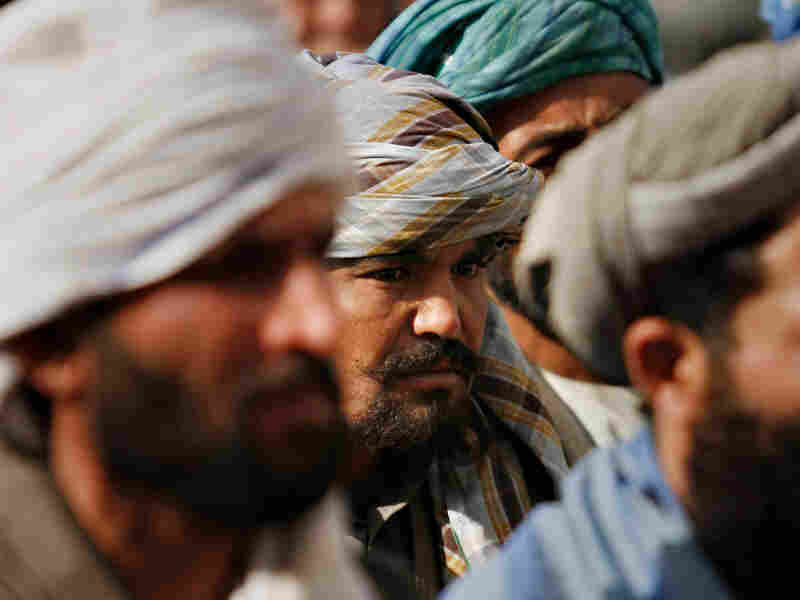 Former Taliban fighters attend an amnesty ceremony in western Herat province, with Afghan police and Italian and U.S. troops. The fighters surrendered their weapons just two days after President Hamid Karzai, in his inaugural speech on Nov. 19, asked his fellow countrymen to embrace the government and lay down their arms. Fraidoon Pooyaa/AP hide caption 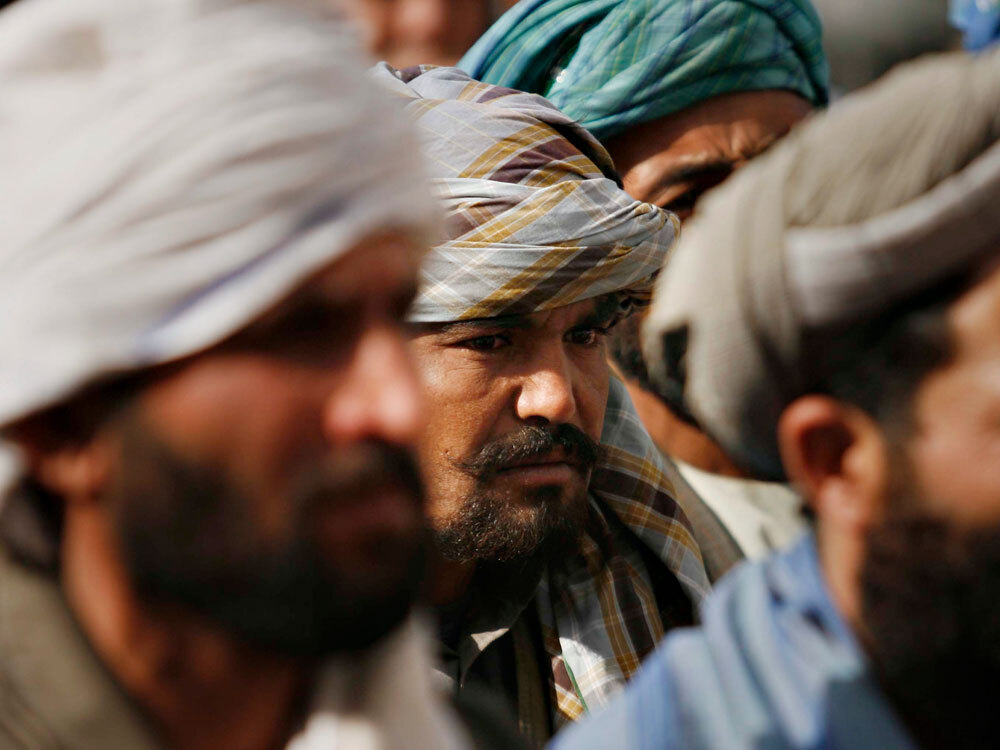 Former Taliban fighters attend an amnesty ceremony in western Herat province, with Afghan police and Italian and U.S. troops. The fighters surrendered their weapons just two days after President Hamid Karzai, in his inaugural speech on Nov. 19, asked his fellow countrymen to embrace the government and lay down their arms.

Haji Fazi Ahmed Tolwak, a commission official, points to a heap of well-worn Kalashnikov rifles stacked on an oriental rug beneath the chandeliers.

Tolwak says the men have just turned themselves into the commission.

One of the men, portly and middle-aged, says his name is Noor Mohammed. Fiddling nervously with his worry beads, he claims he is a Taliban fighter, but that he is quitting because he's tired of it.

The commission has paid him $100 to cover his transportation costs and is going to find him work.

"But we didn't surrender for the money," Mohammed insists. "I just don't want to see this country destroyed anymore."

The commission claims it has processed 8,000 militants in the past few years. But many people are not convinced that this is true. There are stories of Taliban surrendering one day, and then changing their minds.

Wakil Ahmad Mutawakil is one of the commission's greatest critics. He was Afghanistan's foreign minister when the Taliban was in power.

He says the commission has no authority, and he doesn't think that many Taliban will agree to stop fighting.

"I think the Taliban don't trust this. They think there is no willingness for peace. Everything happening now shows signs of war, like new troops coming and militias forming. This reduces the chance of reconciliation," he says.

Mutawakil doubts the militants will deal with an Afghan government widely seen as weak and corrupt. He thinks there's even less chance if the U.S. sends many more troops.

President Obama is weighing a request from McChrystal for 40,000 more U.S. troops, which would raise the total American force in Afghanistan to more than 100,000.

The Taliban leadership has already rejected reconciliation and direct negotiations with the Afghan government unless the international forces first withdraw.

But that hasn't deterred Lamb from trying to win over their foot soldiers.

Lamb says the Afghan and U.S. governments won't talk to Taliban officials directly linked to al-Qaida and international terrorism. But he says it seems they will talk to just about everyone else.

"On the fact that someone has, and the phrase that's often used, 'blood on their hands,' you know, we have all got blood on our hands," Lamb says. "So one needs to just get through that."