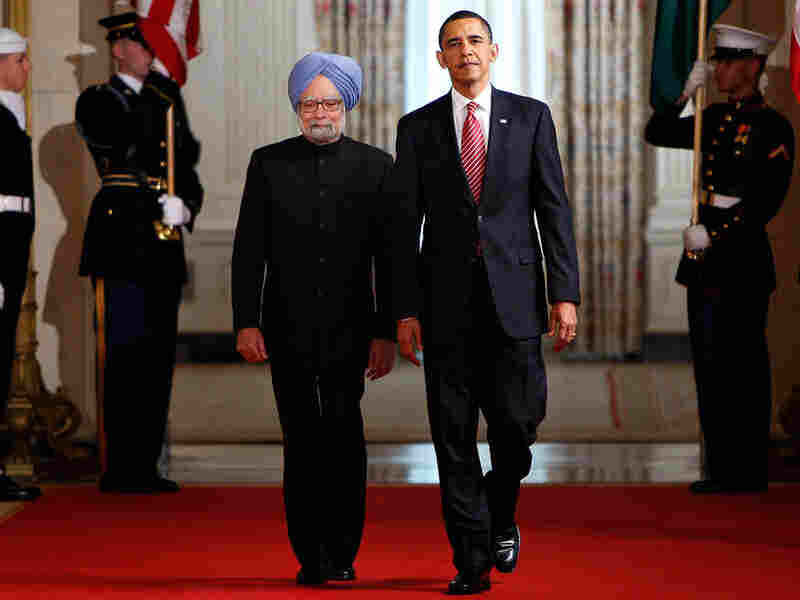 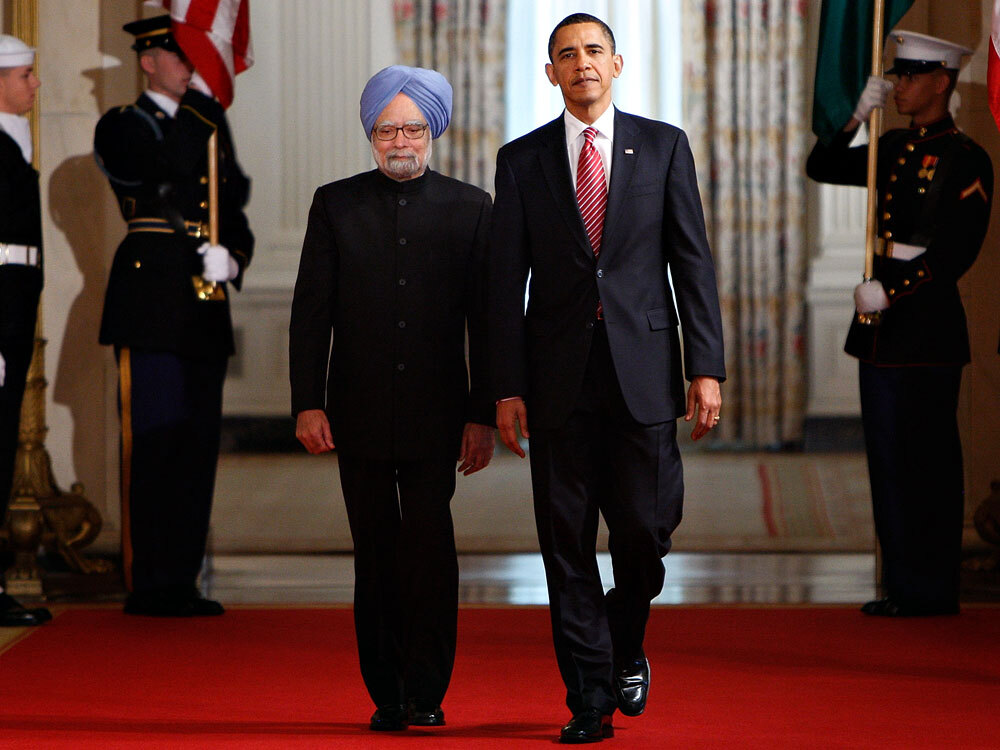 President Obama and Prime Minister Manmohan Singh of India at the state arrival ceremony Tuesday in the East Room of the White House.

President Obama called India and the United States "natural allies" after a meeting Tuesday with Indian Prime Minister Manmohan Singh at the White House, as the president hosts his first state visit.

Obama and Singh announced a wide range of new agreements in areas such as energy and agriculture as they tried to cement a relationship between the two countries that is perhaps the warmest and most productive it has ever been.

"I believe the relationship between India and the United States will be one of the defining partnerships of the 21st century," Obama said at a joint news conference with Singh.

Asked about the tense relationship between India and Pakistan, Obama said it was in America's interest that both countries feel secure, but that the U.S. cannot resolve the dispute. The U.S. and India agree "that our core goal is to achieve peace and security for all peoples in the region, not just one country or the other," the president said.

Indian leaders had gone into the meeting worried that Obama is distracted by issues like Pakistan that could prevent him from treating India as a true global power in the same way as his predecessor.

As such, Manmohan Singh, the Indian prime minister, is not head of state (he is head of government). That distinction goes to Pratibha Patil, India's president. Why then are most news reports calling Singh's trip a state visit? Because the president said so Tuesday.

"Mr. Prime Minister," President Obama said, "yours is the first official state visit of my presidency, and it is fitting that you and India be so recognized."

The Bush administration viewed India, the world's largest democracy, as a key strategic partner in Asia and as one of the world's most dynamic economies. Under Bush, Washington and New Delhi overcame decades of tension and mutual suspicion, signing a landmark deal in 2005 on civil nuclear cooperation.

"I don't think President Obama has convinced the Indians yet that he would be willing to go the extra mile for India that President Bush did," says Lisa Curtis, a former U.S. diplomat now at the Heritage Foundation. "They've seen the Obama administration very focused on Pakistan and Afghanistan, and there is uncertainty about how India fits in with President Obama's thinking."

The selection to host the Indian prime minister as Obama's first state visitor, complete with a formal state dinner on Tuesday night, was designed as a deliberate signal of India's prominence in Washington.

Singh emerged from his meeting with Obama offering warm words for his host.

"I was deeply impressed by President Obama's commitment to the U.S.-India strategic partnership," Singh said.

Singh's praise likely came as a relief to the Obama administration, which had some cleaning up to do after a few perceived missteps during the president's swing through Asia earlier this month.

Indian officials were worried after Obama delivered a major policy address in Tokyo on the "rising powers" of Asia without a single mention of India.

Separately, the formal statement issued by China and the United States during Obama's Beijing visit said the two countries would play a joint role in managing issues in South Asia. With no mention of India, the statement fueled additional doubts in New Delhi.

What India wants is that Obama will continue treating them as a center of power in Asia.

"What Bush did was, he treated India as one of the big two or three centers of power in Asia," says Ashley Tellis, a senior associate at the Carnegie Endowment for International Peace. "What India wants is that Obama will continue treating them as a center of power in Asia."

Still, the Obama administration has been cooperating actively with India in a number of areas, including energy, health, education and agriculture.

"That's going to be part of the story — that the U.S.-India relationship is no longer a single-issue relationship," says Tellis, a former State Department official. "It's moved beyond the old obsessions with the nuclear issue."

The two leaders announced several new initiatives in these areas during the visit, including ones to boost cooperation on energy security, clean energy, agriculture and climate change.

"This will open up new opportunities for our universities and laboratories, and create human capital to feed the global needs of the future," Singh said at the joint news conference.

But when it comes to climate change, there were no apparent breakthroughs. India remains opposed to accepting binding restrictions on its emissions.

Obama and Singh also discussed nonproliferation issues and the war in Afghanistan, as well as counterterrorism. India wants the U.S. to put additional pressure on Pakistan to crack down on the group believed to be responsible for the Mumbai attack last year.

But Pakistan watched the meeting anxiously for its own reasons.

"Pakistan is paranoid about the U.S. relationship with India," says Curtis. "They recognize that India is moving forward economically and is having much greater influence on a global scale, and, unfortunately, Pakistan seems to be moving in the opposite direction."

The U.S. has historically had close relations with Pakistan, but tensions over Islamabad's seriousness in tackling terrorism have strained the relationship in recent years.