Accessibility links
In China, Creating A Menagerie Through Mimicry Professional mimics in China used to imitate sounds as a form of entertainment. Not many practitioners are left, but one family is trying to preserve the art. Cheng Jiaqiang, who learned his skills from his grandfather, has a barnyard repertoire but specializes in bird songs. 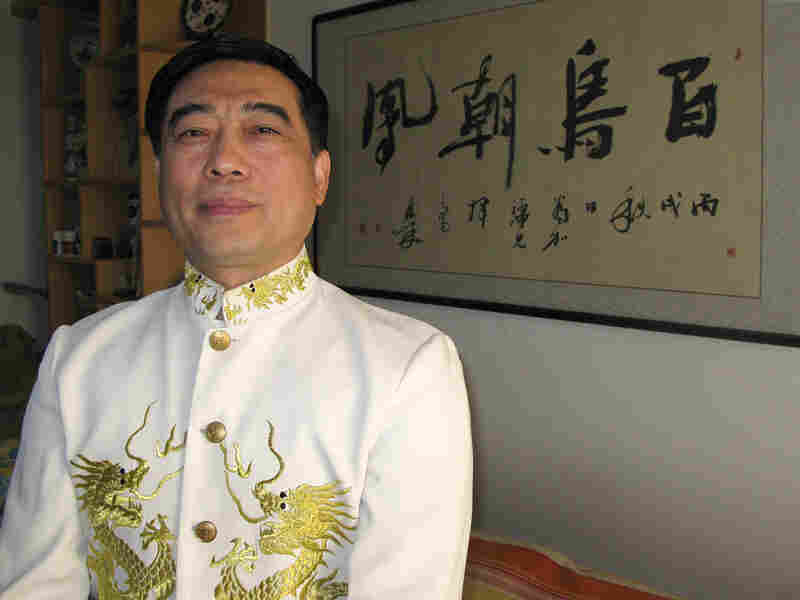 Professional mimic Cheng Jiaqiang, shown here in his Beijing apartment, learned his skills from his grandfather. The calligraphy on the wall behind Cheng refers to his signature act: Cheng imitates a bird imitating a musician imitating a bird. Anthony Kuhn/NPR hide caption 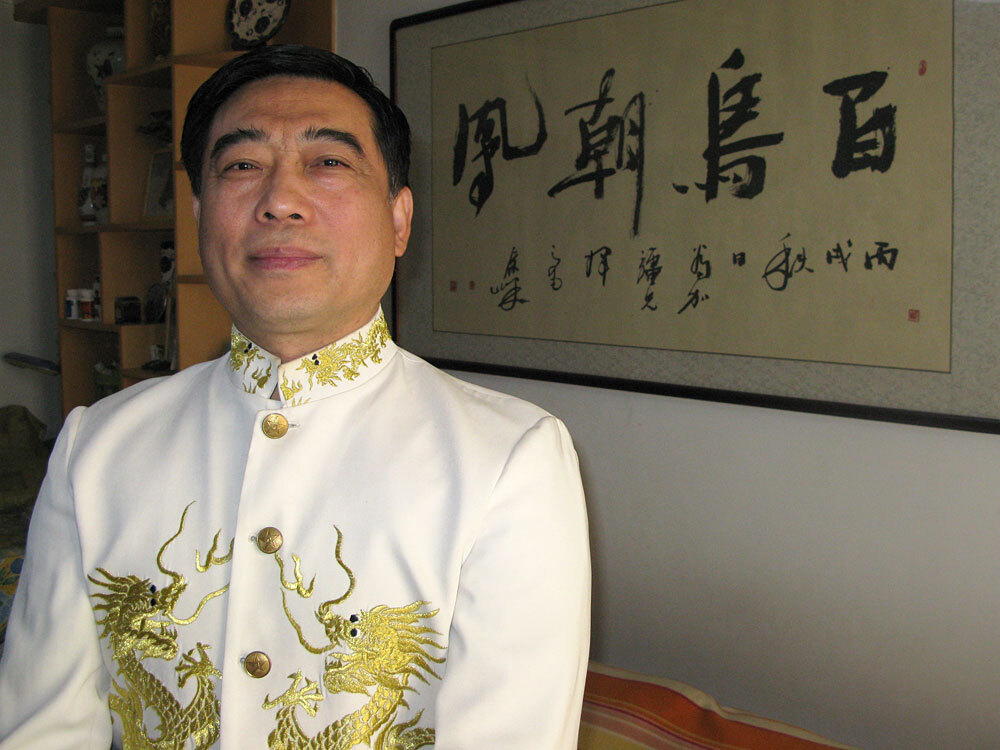 Professional mimic Cheng Jiaqiang, shown here in his Beijing apartment, learned his skills from his grandfather. The calligraphy on the wall behind Cheng refers to his signature act: Cheng imitates a bird imitating a musician imitating a bird.

In China, professional mimics used to imitate sounds as a form of entertainment. Not many practitioners are left, but the descendant of one master is trying to preserve the art.

At the end of the last imperial dynasty in the early 20th century, Cheng Kuan fell on hard times. He eked out a living as a street performer among the musicians and storytellers, contortionists and strongmen of Beijing's Tianqiao neighborhood. He performed a combination of acrobatics, magic and martial arts. But his specialty was mimicry, particularly imitating animal noises.

"When I was 7 years old, my grandfather would wake me and my brother up at 4:30 in the morning to practice our basic skills, such as handstands," he says during an interview in his apartment. "My grandfather's skill was superb."

Cheng's ancestors were Manchu bodyguards in the imperial court. With his heavyset physique, Cheng looks like he'd make a good bodyguard, too. In fact, he works for a state-run arts troupe.

Like a martial-arts master, Chen says his power is rooted in his dan tian, an acupressure point in his lower abdomen. As he summons his energy, his torso contracts, his mouth opens, and out comes the "cluck, cluck, cluck" of an agitated hen.

"To be a good mimic, you need a skinny tongue that can move left and right, up and down, clockwise and counter clockwise," he explains. "You have to practice until it's really agile. Like imitating a galloping horse — you make that sound by flicking your tongue."

But the Cheng family's real strength is bird songs, especially those of the thrushes and larks that elderly Beijingers carry to local parks in ornate wood and brass cages. Cheng tweets out a convincing high-pitched duet with his brother.

Cheng's art is in danger of dying out. From 1966 to 1976, during the Cultural Revolution, traditional art forms such as mimicry were banned, as were the master-disciple relations that kept them alive.

The master-disciple relationship is by nature conservative. It ensures that an art will not be widely taught. Cheng says the idea is to pass on your skills only to individuals whose talent, commitment and integrity will do justice to the art.

"Accepting a disciple is different from having a class with students," he says. "Most people don't have what it takes — lips, teeth, throat, tongue and nose. I'm very strict about this. You have to really love mimicry. You have to treat it like a job."

"It's not just playing around," he emphasizes.

Cheng has just accepted his first disciple, an earnest-looking young man named Jiao Jian. Jiao says he practices his skills for two hours a day and is happy to be making progress under his master's guidance.

"At first, practicing was quite lonely. I was just at home, making noises. But after a while, birds outside my home — especially magpies — would start chirping along with me," Jiao says

Cheng concludes with his signature act. He puts some Chinese folk music on in the background. Then he mimics a bird mimicking a musician — who is imitating a bird.