Accessibility links
Point, Click, Feed: Web Boosts Food Banks' Efficiency Food banks are looking for innovative ways to make sure they have enough of the right kinds of food at the right times. Virtual food drives allow donors to choose items that the food bank needs. And because food banks buy in bulk, they can get more bang for the donated buck. 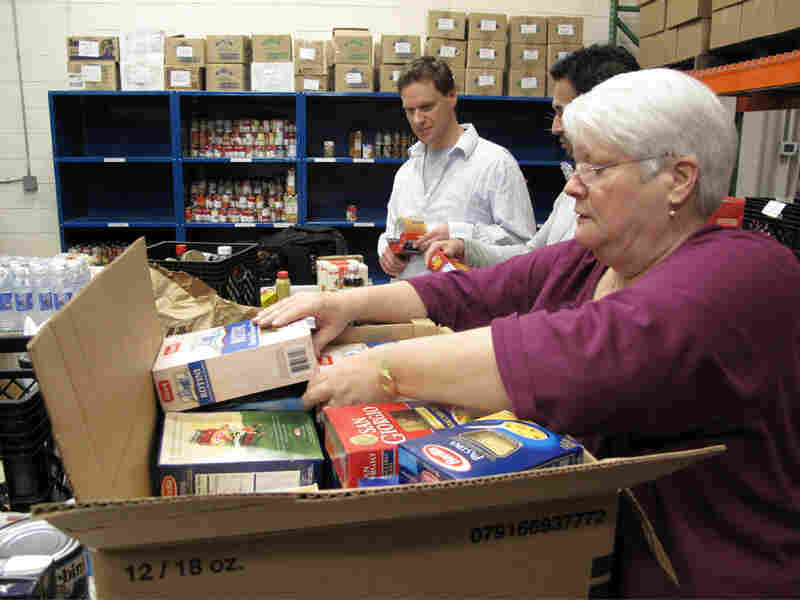 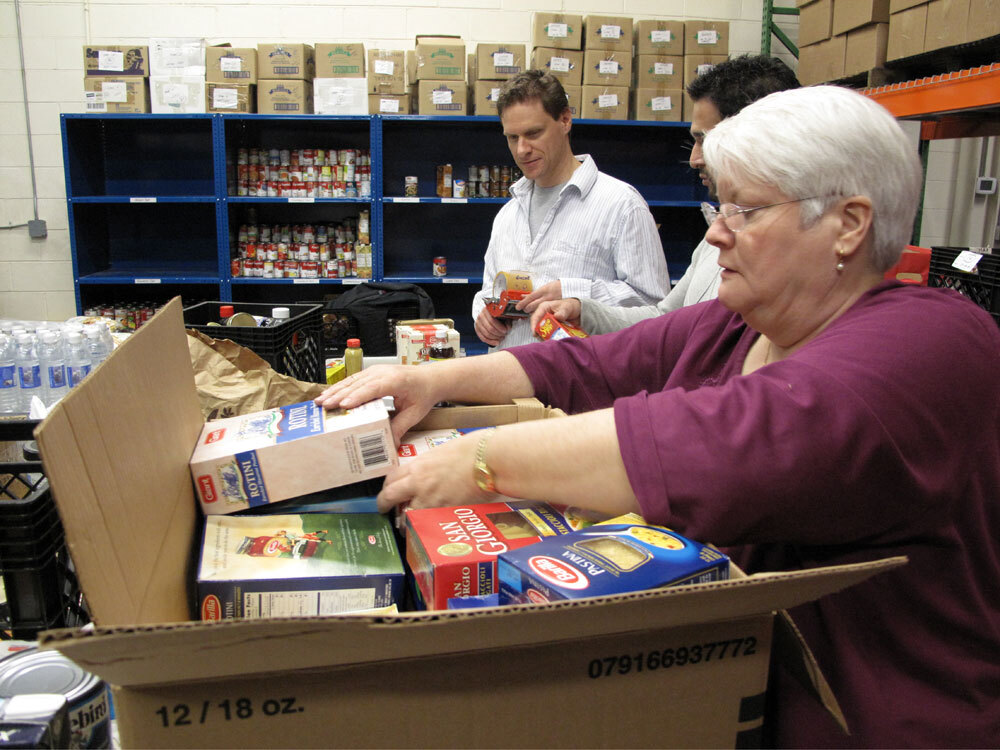 Food banks and soup kitchens get a lot of attention — and donations — this time of year. But it's keeping their shelves stocked after the holidays that those who feed the hungry worry about most.

At the Manna Food Center in Gaithersburg, Md., one group of volunteers fills cartons with cans of green beans and boxes of pasta. But they're not doing it for the people waiting outside the warehouse for food. Instead, they're packing up supplies for February and March, when Manna's executive director, Amy Ginsburg, says the shelves here will be a lot emptier.

"We're kind of like squirrels," says Ginsburg. "We store food, and then we have it when we need it."

And by all accounts, she'll be needing more and more. Food bank directors across the country are preparing for a long, hard year ahead. As they do, they're trying to juggle the ups and downs of donations with the unrelenting demand. Many are turning to the Internet to get the help they need when they need it.

Claudia Johnson is with the Community Harvest Food Bank of Northeast Indiana. She says her food bank still holds regular food drives, but it has also decided to hold a virtual food drive because of the added flexibility. Donors can go to the group's Web site and select from a long list of suggested items.

"We even have pictures of the things on our virtual food drive. So you can see a turkey sitting there and click on the turkey and that will add $13.35 to your shopping cart," says Johnson.

She says online donors can also help the food bank — which buys in bulk — to get a lot more bang for the buck. That same turkey would cost a donor $19.35 at the store. 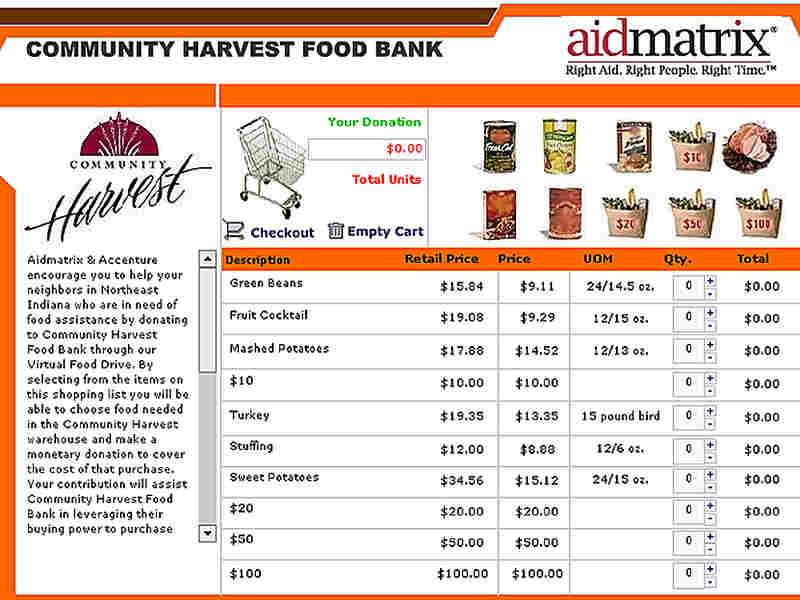 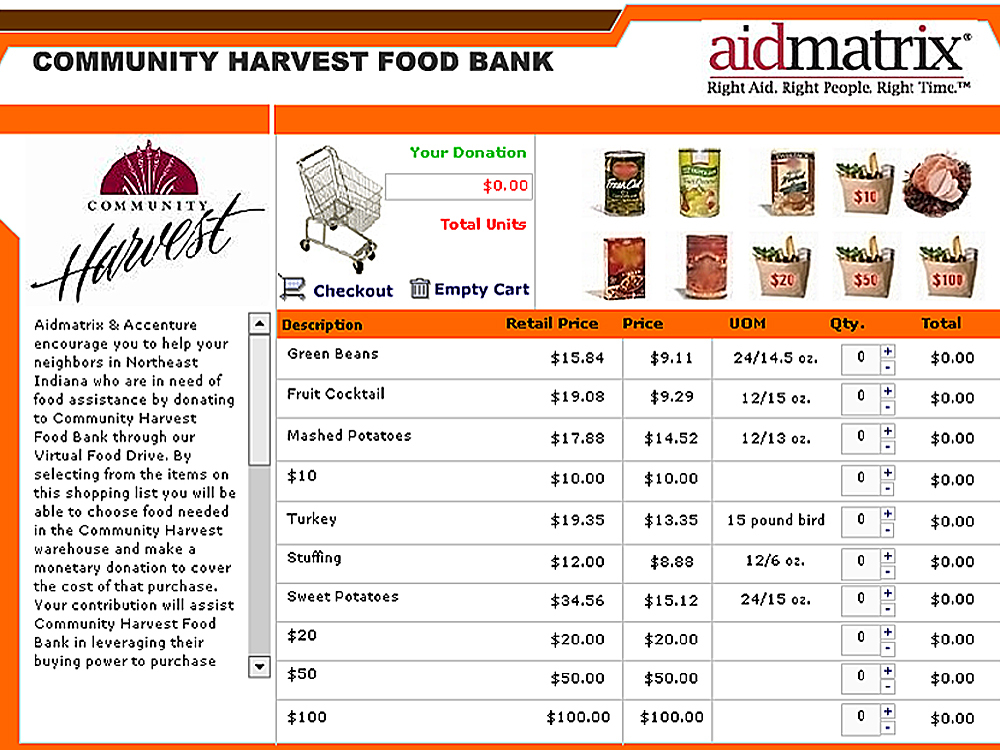 The Community Harvest Food Bank in Fort Wayne, Ind., features a shopping cart application on its Web site so that donors can select food items online.

Johnson says there are other advantages.

"Some of the food we receive in a food drive is just not good, for various reasons. And so, some of it goes to the dumpster, and that's unfortunate as well," she says. "This way we know it's fresh, and it's what we need exactly."

And most food banks and pantries are familiar with the problem. In a tour of the SERVE food pantry in Northern Virginia last year, then-CEO Cheri Villa showed a special shelf where they had some of the odder donations on display.

"We've gotten a can here, a 15-ounce can of quail eggs. We have grass jelly. We have jackfruit in syrup," she said. Villa then pointed to a small jar with a rusted lid. "We got a baby jar of prunes with tapioca. And that would be wonderful, only it has an expiration, it looks like it's from 1963 or something," she said.

With supplies tight, food banks say they can't afford such waste. The North Texas Food Bank in Dallas has been holding virtual drives since 2002 to help those who can't get to the stores themselves and to reduce the food bank's transportation costs of picking up food drive items.

But President and CEO Jan Pruitt says many people still prefer doing it the old-fashioned way, in part because of the emotional reward.

"What we're finding is that a lot of times families especially want to use that canned food drive as a teaching experience for the kids. Or it's just something that makes them feel real good to go to the store, buy the food and bring it to the food bank or take it to the canned food drive," she says.

Still, Pruitt wants to give donors as many options as possible because the need is so great.

Her food bank follows another trend, relying more on grocery stores for supplies. Many retailers donate products that are still fresh but hard to sell as the expiration date draws near. National networks, such as Feeding America, are encouraging Congress to extend tax breaks to make such donations more plentiful.

Ginsburg of Manna Food Center says she already gets about a third of her food from grocery stores. She points to a line of boxes filled with sweet potatoes, turnips and other items ready to be distributed to families.

"When the trucks return from the grocery store, then we'll add more to the boxes," she says. "They're going to have blueberries, chicken, lots of produce, probably a couple of sandwiches."

That should be enough to help the 315 families waiting in line today — an all-time record. But she still has to worry about tomorrow.