Accessibility links
Black Radio Fights Performance Royalties New legislation in Congress could drastically change music-industry economics. Musicians in the U.S. are not paid when their songs are played on the radio unless they wrote the songs, too. Only songwriters get radio royalties. Broadcasters are not happy. 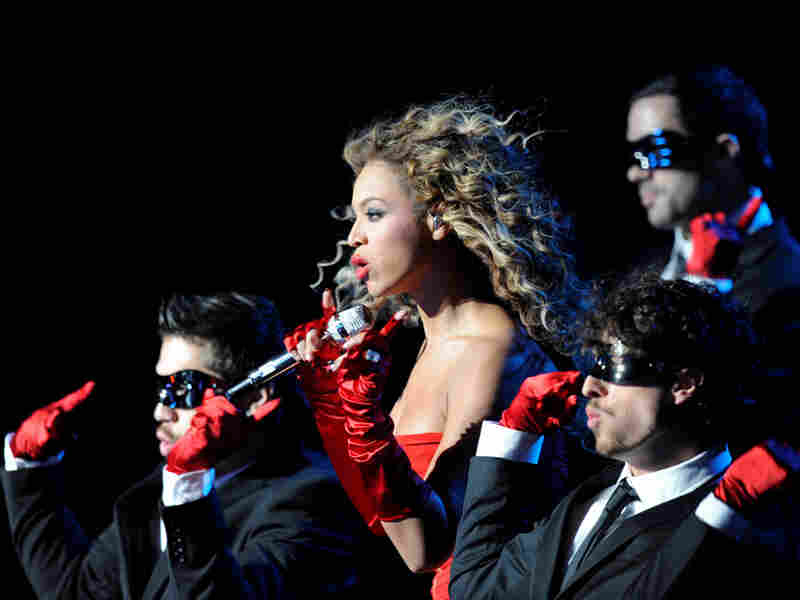 Right now, only songwriters are paid royalties for radio airplay. Under a proposed performance royalty bill, performers like Beyonce would be paid, as well. AFP/Getty Images hide caption 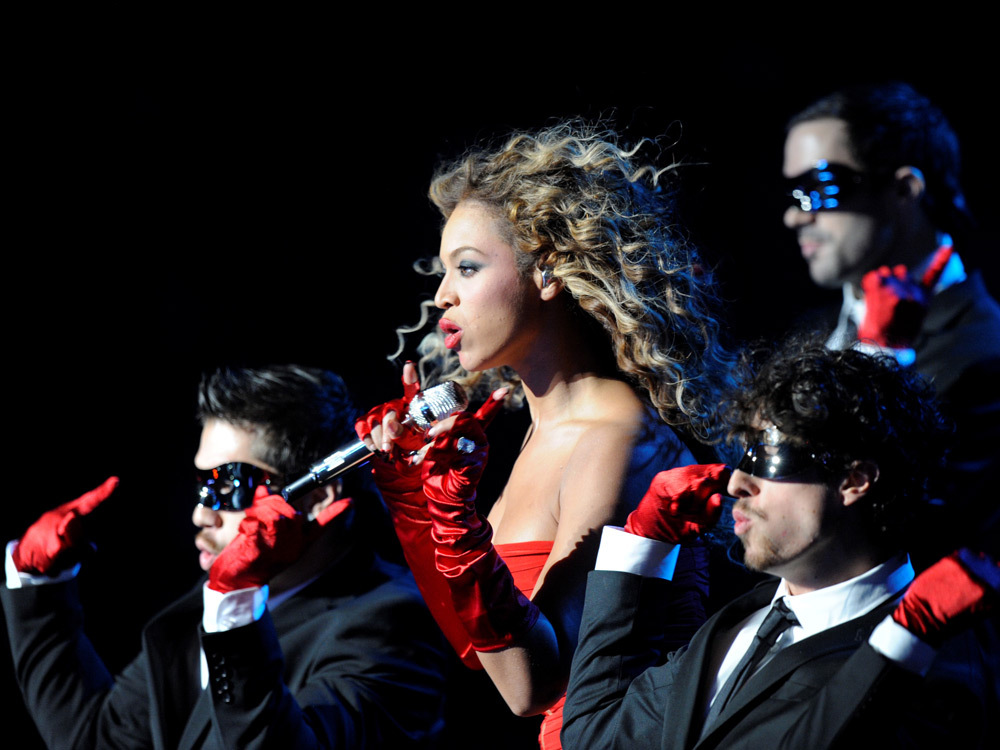 Right now, only songwriters are paid royalties for radio airplay. Under a proposed performance royalty bill, performers like Beyonce would be paid, as well.

New legislation in Congress could drastically change music-industry economics. As it currently stands, musicians in the U.S. aren't paid when their songs are played on the radio unless they wrote the songs, too. Only songwriters get radio royalties, not the folks who play and sing their tunes. Two bills moving through the House and Senate would change that, by making radio broadcasters pay royalties to musicians, too.

Radio broadcasters hate the idea of performance royalties — really, really hate it. They're speaking up in Congress and on air.

Cathy Hughes is the legendary founder of Radio One, the country's largest chain of black radio stations. For months, her stations have played her announcements against the performance-rights bill. Hughes complains, on air, about all the work it would take to comply.

"If the performance tax is passed, all radio stations will have to count how many times a song is played each day and each week," Hughes says in an on-air announcement. (The bills do not really propose a tax.)

Natalie Hopkinson says there's no escaping Hughes. Hopkinson is an editor for the popular online news blog The Root, which is geared toward African-Americans. She says just about everyone who listens to urban radio has heard Hughes' point of view.

"Radio One holds more than half of the top 30 black radio markets. They dominate," Hopkinson says.

Is This A Racial Issue?

In an essay on The Root, Hopkinson writes that she resents Hughes' attempts to paint proposed financial regulations as a racial, gender and social issue.

"You know, she's the little woman. You know, she's going up against the big recording industry," Hopkinson says. "No, you own 53 stations and this is a huge, huge, massive, multimillion-dollar company that is still bringing in quite a bit of money."

NPR was unable to get Hughes to comment. But James Winston, who heads the National Association of Black-Owned Broadcasters, says his organization's members can't be blamed for not wanting to pay royalties.

"Our revenues have been going down. We recognize we got problems," Winston says.

Across the industry, ad revenue has dropped 23 percent in the past year alone. Listeners are turning from radio to MP3 players, computers and cell phones. Winston says there's a giant paradigm shift across the entire music industry, but radio isn't trying to squeeze more money out of the recording industry.

"Miss Hughes didn't start the fight. It began with hearings in Congress, where these older performers — most of who happened to be African-American — were brought forward to tell their tales of woe that their songs were being played and they weren't being compensated," Winston says. "Now, nobody asked, 'Well, what deal did you have with your record company? Why weren't you being compensated by your record company for these records?' Instead, everyone pointed their fingers at broadcasters and said, 'You're the bad guys.' "

It's wrong to think in terms of good guys and bad guys, Hopkinson says. She says she doesn't want to see radio — especially black radio — making the same mistakes as the recording industry.

"They're just fighting over the scraps left over at this point, and I really think Miss Hughes' time would be better spent figuring out a new model and a way to evolve," Hopkinson says.

Chuck D has some ideas. He was working at a college radio station back when he founded Public Enemy in the 1980s. He says that, in order to survive, black radio should grow local talent.

But broadcasters would still have to pay those musicians royalties, as Chuck D says they should. He says he'd like to see people who own radio stations be a little less defensive about performance rights. (It should be noted that NPR has expressed concerns about the bills to Congress.) But he says that black broadcasters, like Cathy Hughes, are competing against more powerful networks that lack a real connection to black communities.

"I'm not saying Miss Hughes doesn't. But in order for her to stay in business, she has to be able to keep her head above the other corporations that probably don't give a doggone about the black community," Chuck D says.

In the end, it's corporations that will largely profit from a change in collecting performance royalties from radio stations. Fifty percent of the money will go to the rights holders — usually record labels — 45 percent to the stars who sing the songs, and 5 percent to the musicians who back them up.

In order to feel for black radio stations as they fight against paying new royalties for the songs they play, I'd first have to like them. Although I grew up with urban music — R&B, hip-hop and neo-soul — I am proudly anti-Top 40/urban radio. 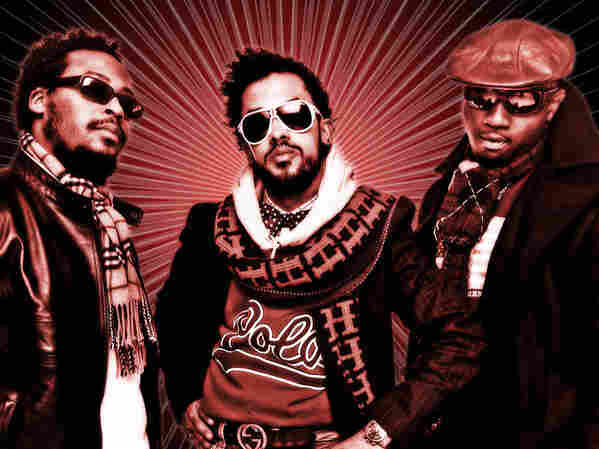 Why worry about the plight of black radio when creative, struggling artists like Sa-Ra won't see these new performance royalties, let alone get on the air? Courtesy of the artist hide caption 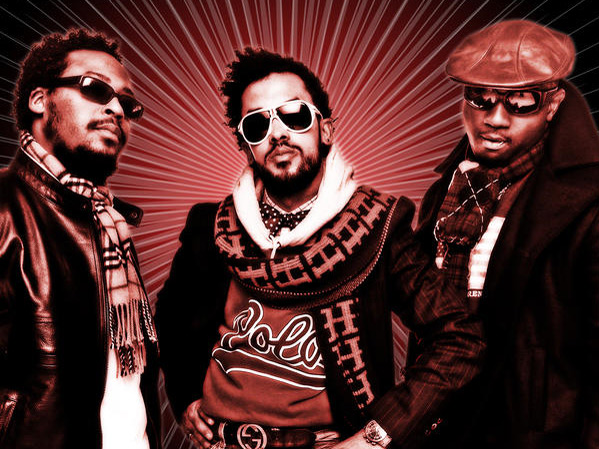 Why worry about the plight of black radio when creative, struggling artists like Sa-Ra won't see these new performance royalties, let alone get on the air?

For the past decade or so, I've seen a marked decrease in the quality and diversity of music played on black-themed urban radio stations. You know it's bad when you hear the same song on three different stations at once. It's even worse when you can't tell two different songs from each other.

Don't get me wrong: I am a big fan of popular music. I get the ubiquitous genius of Beyonce's larger-than-life "Single Ladies." I think Kanye West saved hip-hop from the dead earlier this decade. And I understand that Jay-Z, hip-hop's ambassador, with his 11 No. 1 records, is arguably bigger than Elvis.

But I am not convinced that popular black radio provides the best showcase of what modern urban music has to offer. And for that reason, I feel no remorse when I hear that urban stations might have to pay new royalties for the songs they play.

For one, the artists who would benefit the most from these new royalties are already successful. As more stations take fewer chances on what music they choose to play, we are guaranteed that the artists you hear on these stations are already tried-and-true, with a track record of success and the income that comes along with it. The most popular artists on urban radio today — Rihanna, Alicia Keys, Lil' Wayne and the three I mentioned a few paragraphs up — have been bona fide hits for years. And the new artists garnering equal amounts of radio love often mimic these artists or have their stamp of approval (see Drake). And, let's face it, these artists are making their money on touring and merchandising; everything else benefits the record company more than the performer.

The sad truth is that the struggling new artists changing the landscape of urban music probably won't be heard on urban radio. And these are the artists those in favor of new radio performance royalties claim to champion. But artists like Sa-Ra, Laura Izibor or Brother Ali, and even established critical darlings like Q-Tip, won't be heard on your favorite "black" radio station. Those who benefit from the new royalties, the Kanyes and Beyonces, most likely won't be the ones that need it.

So, ultimately, I'm not concerned with the plight of urban radio in the face of these proposed new fees, nor am I convinced of their usefulness to the new and struggling artists who actually need them. I couldn't really care less either way. For the past few years, I've been finding my music through blogs, critical reviews, word of mouth and live shows. But radio stations and record companies haven't seemed to realize that a lot of folks my age are doing that. And as they stick to an outdated formula, we get our music fix elsewhere. For a lot of us, radio play stopped mattering years ago. So this fierce debate over performance royalties is one many of us won't be listening to anyway.