Accessibility links
Neil Gaiman Asks: Heard Any Good Books Lately? The audiobook is here to stay — in one form or another. And that's fine with author Neil Gaiman, who has loved hearing stories since his childhood days. Gaiman talks to writer David Sedaris and reader Martin Jarvis about what makes a great audiobook — and a great reader. 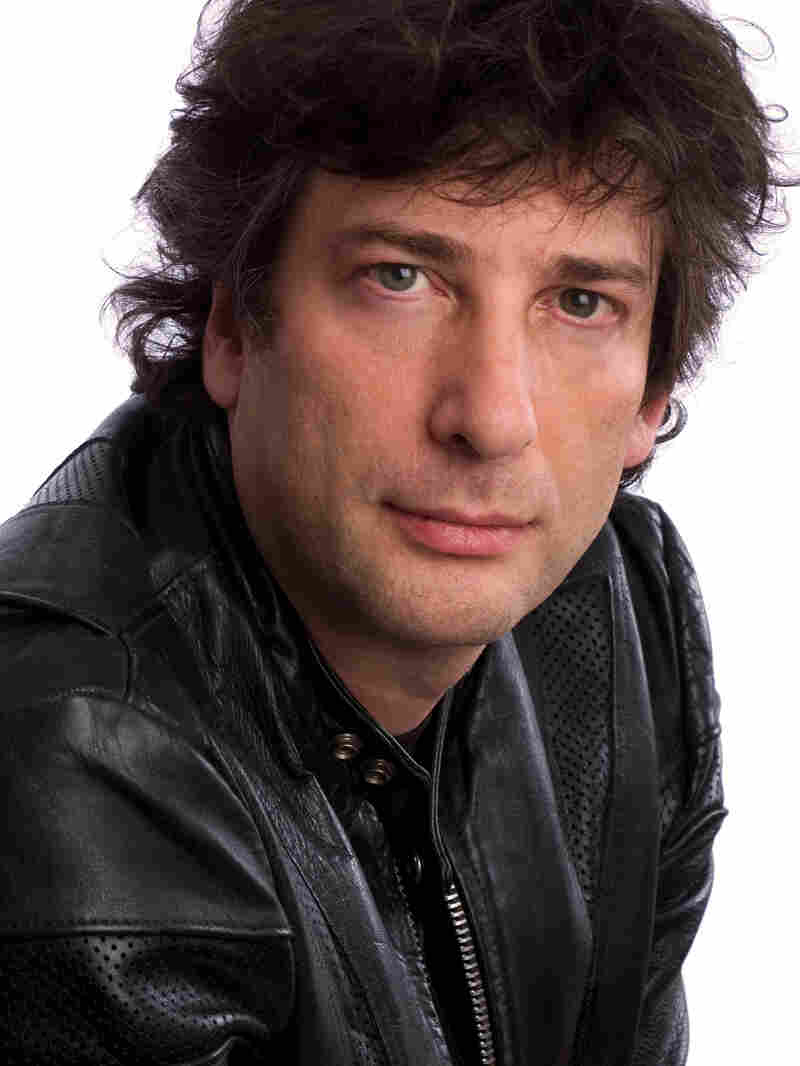 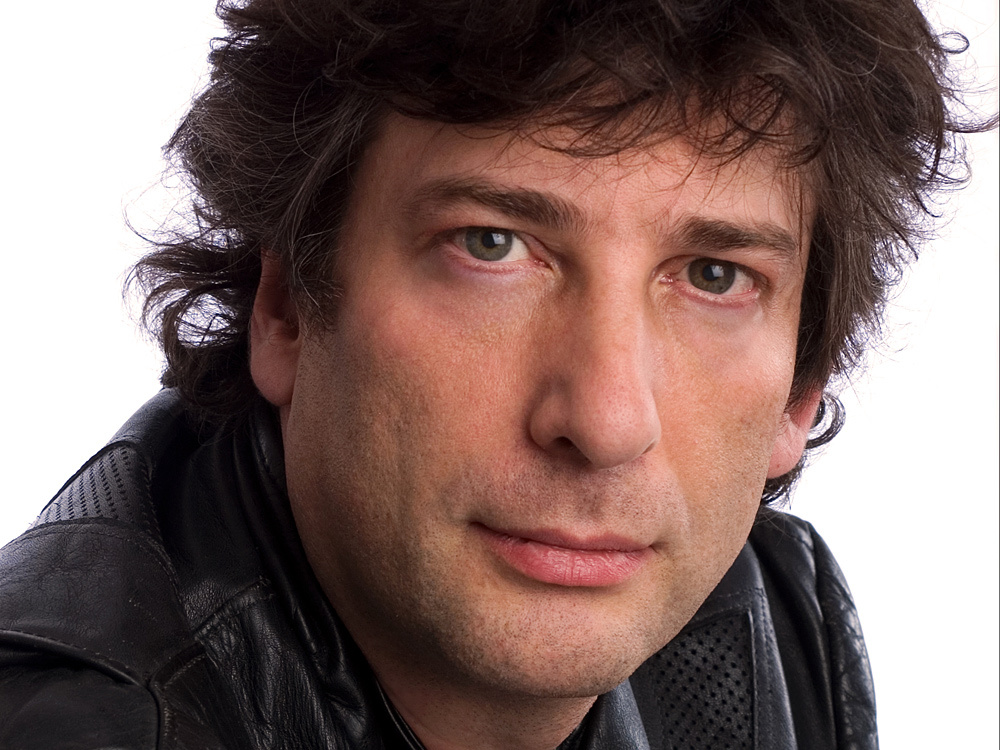 Neil Gaiman is an author and listener who loves a good tale. Here, he ponders the future of audiobooks:

I grew up in a world where stories were read aloud. My mother read to me. My father and grandparents invented stories, mostly about animals, which they would tell me at bedtime.

Some of my earliest memories are listening to stories on the radio as a boy in England. I had a record of Beatrice Lillie reading the poems of Edward Lear that I played until it was one long scratch.

I read aloud whenever I could. I would read to my sisters if they would sit still long enough. I still remember being played the original 1954 Under Milk Wood in English class, and rejoicing in the words and the lilt of the voices.

I didn't rediscover spoken-word stories until I was a parent. I would read to my children, and began to supplement that with cassette audiobooks. They made car journeys pass faster, more interestingly. And you knew you had a good one when nobody wanted to get out of the car at the end of the journey.

I began to buy, or rent, classics and new books and old favorites. A drive from Florida to Minneapolis became Stephen King reading his book Bag of Bones; a journey from Wisconsin to New York was Tom Parker reading an unabridged Huckleberry Finn. I realized I was experiencing the stories differently, word by word. Listening.

I was overjoyed the first time one of my publishers let me record one of my own audiobooks, though I was slightly saddened when she explained that there would soon be no more audiobooks: Cassette tape players were vanishing from cars, and packaging long books on CD was cost-prohibitive. The audiobook was going to go the way of the dodo. I began to treasure audiobooks as beautiful things that would soon be history. 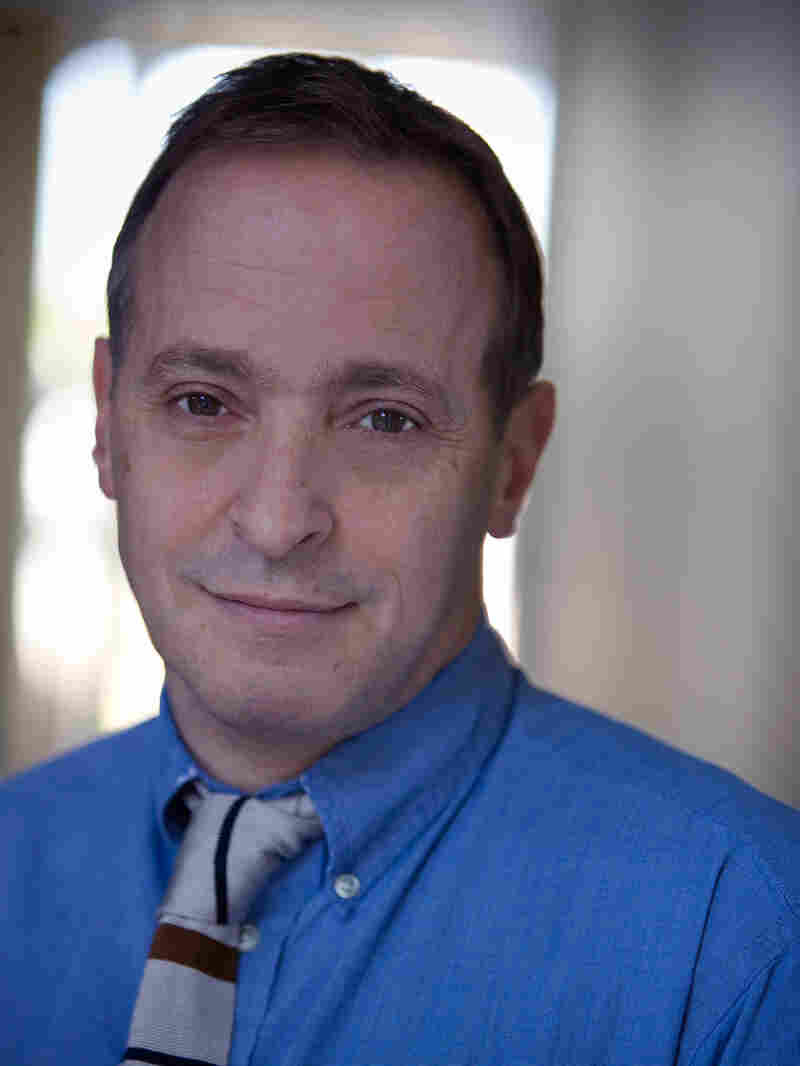 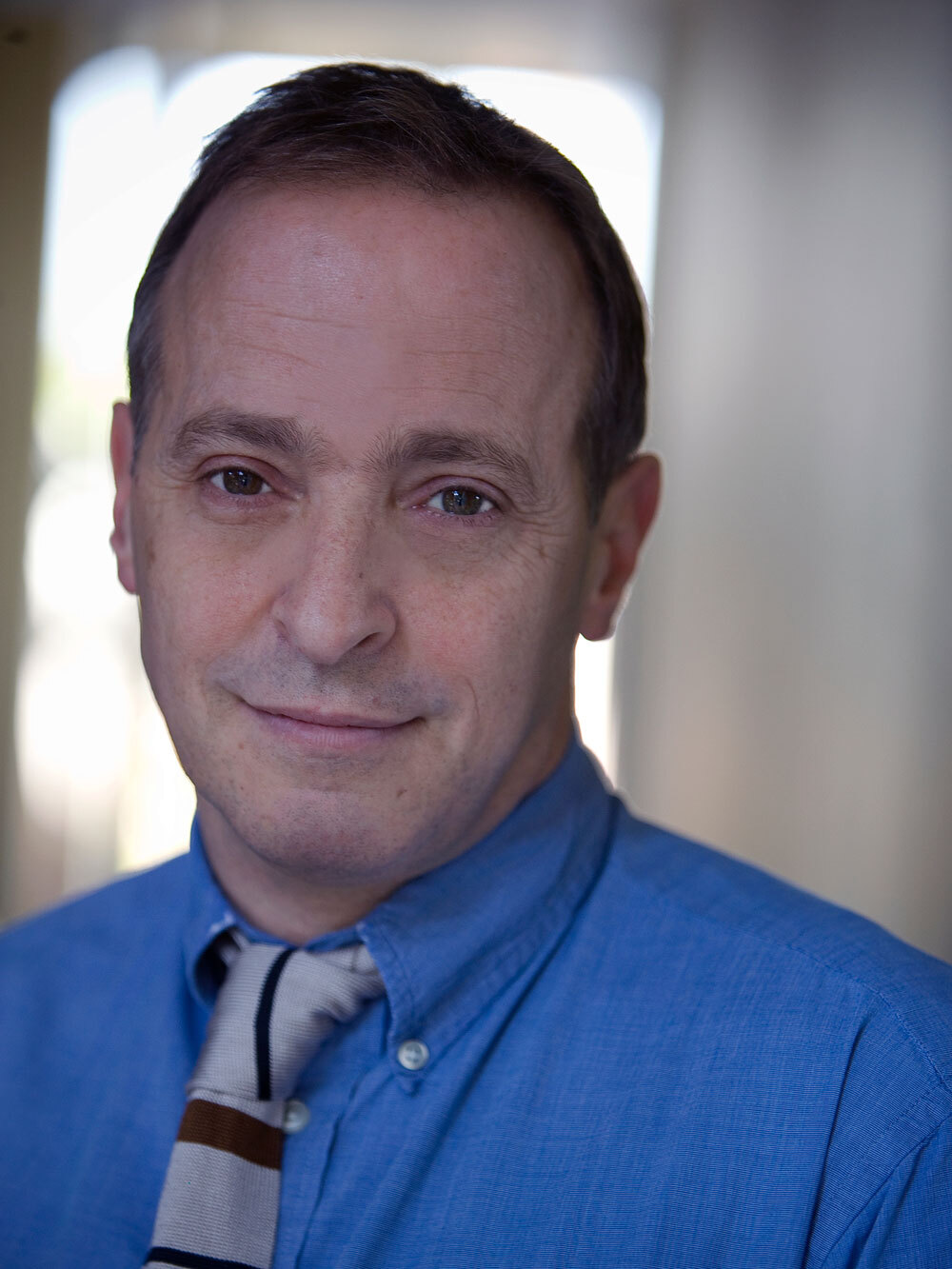 But the death of the audiobook never happened. In the past six years, I've recorded six audiobooks, and although it can be exhausting, I've loved the process and have been delighted with the result.

Author David Sedaris is someone else who records his own audiobooks, which will come as no surprise to anyone who has heard his NPR pieces. When I decided to investigate the world of audiobooks, I started with David.

"I'm a huge tapeworm," he said. "I think I heard my first one, it was one of those musty ones. Remember, you would find them at the library in boxes the size of a suitcase. They were actual tapes — and that's where I first started with audiobooks.

But audiobooks can vary wildly. The person reading makes all the difference.

"Sometimes you get an audiobook, and you realize too late that it's just the wrong reader," David said. "Like, I hate it when a guy is reading a book and he'll say, 'There was a knock on the door. It was Rebecca. Well, it was about time, she said,' " David now using a narrator's high-pitched voice.

A similar scenario came to the mind of English actor Martin Jarvis, one of the leading readers of audiobooks.

"It's possible with a thriller, let's say a very serious thriller, you can — I'm just inventing something out of my head now — let's say, 'A man is in a room. There is a knock at the door. Come in, he said. The door opened. An attractive young woman walked forward. Hello, she said, what is your name? My name is John. What's yours? Eileen.' In other words, I'm really not changing my voice at all." 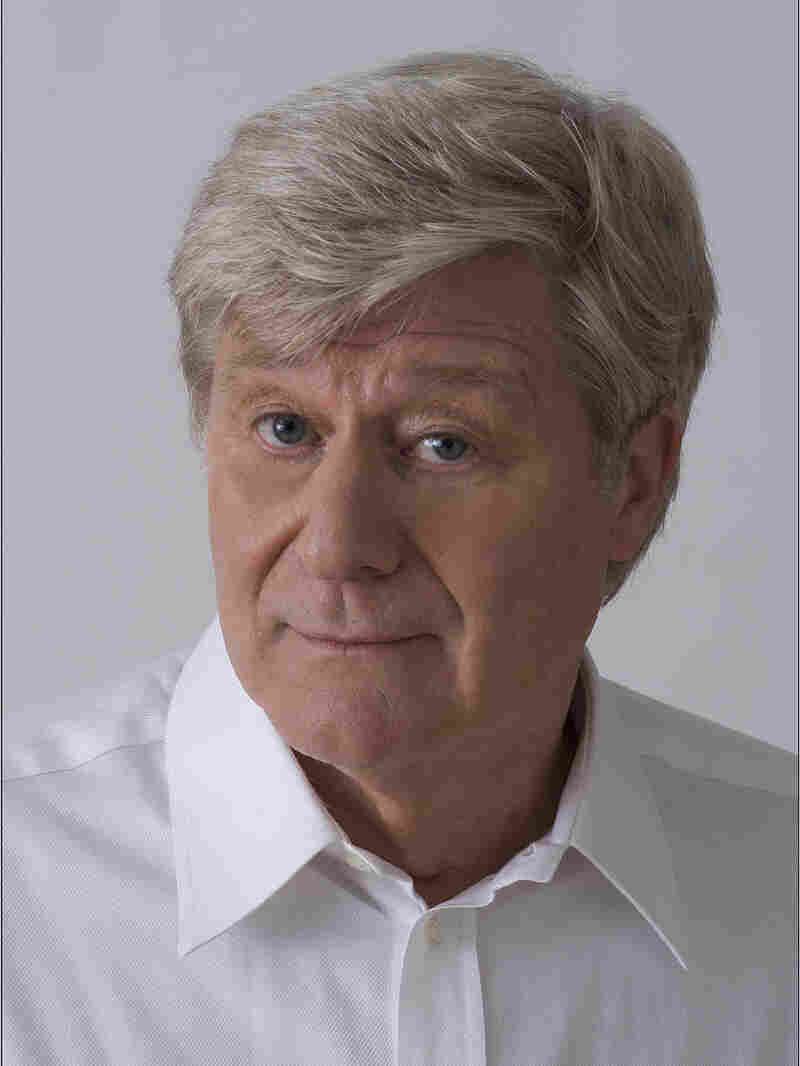 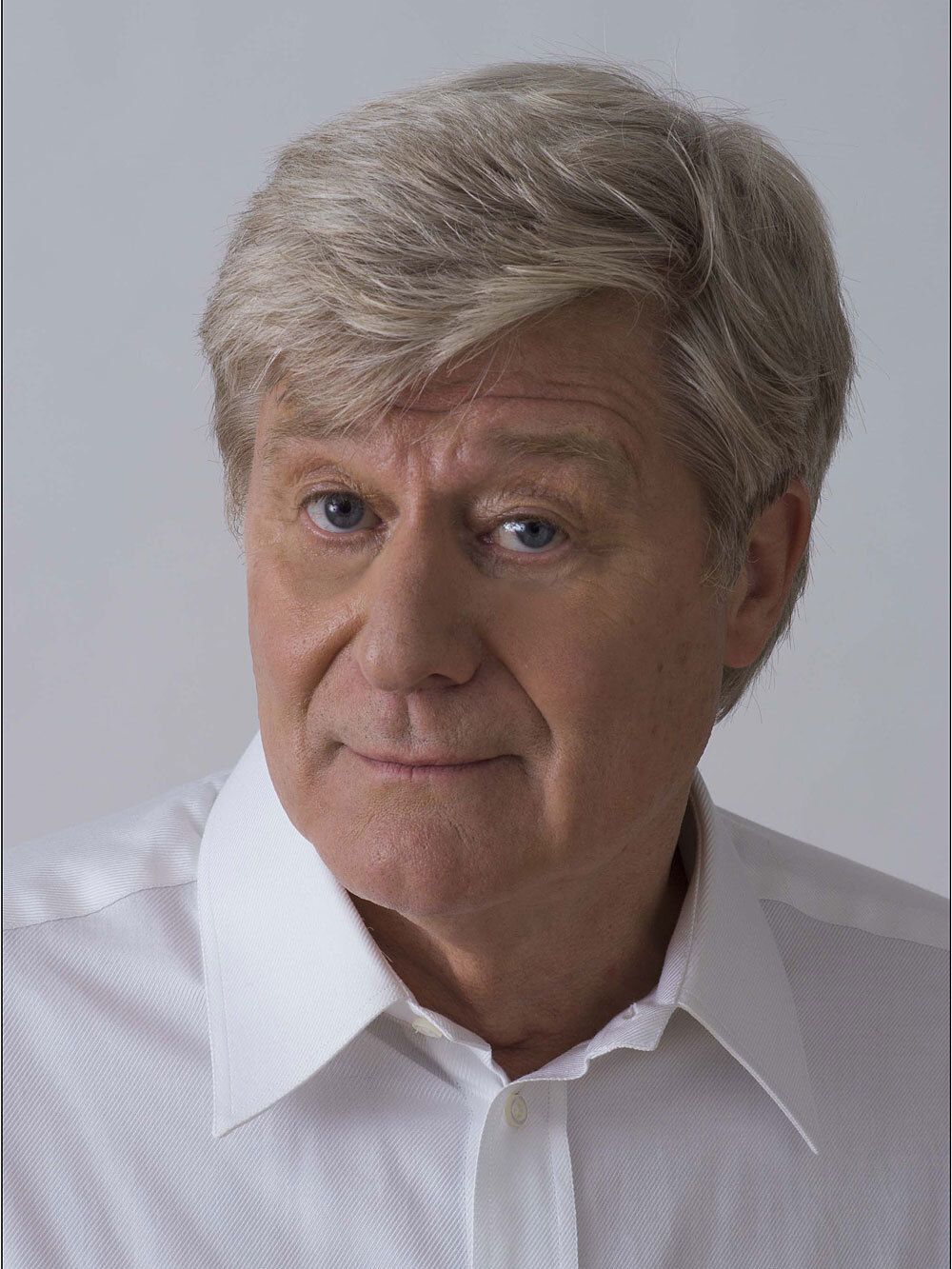 Martin Jarvis On Being A Reader

Martin has a company that produces audiobooks. And — full disclosure here — he recorded Good Omens, a novel I wrote with Terry Pratchett. Martin's read hundreds of audiobooks, been thousands of characters.

"Very often, if a character reminds me, say, of Mrs. Hilda Carden," Martin said, "I would think of Mrs. Carden and how she used to say, 'Oh, hello, Martin. Do you like cabbage better than you used to? Because you are coming to lunch on Sunday.' And I would just think of her, not put on her voice, but think of her, and hopefully her attitude, and the way she spoke, would come through.

"Sometimes I'll call upon an attitude of some of my old teachers. If there's a character of, say, a rather pompous man who lays down the law but is actually very amiable, I will think of a man called John Brantston. And say, 'May I have a word with you?'

"Or a rather more steely person, a teacher — I think his name was Dick Glen Jones: 'Come here, Jarvis. I have a bone to pick with you.' And that would provide a different color and tone."

The process of recording an audiobook is a long one: It takes a good three days to record a medium-sized novel. Just you and the words, for hour after hour.

There are pitfalls you really only discover when you're reading aloud. Inadvertent tongue twisters or clumsy sentences that make you curse the author, which for me, is me. So I'll sometimes rewrite sentences prior to publication. And then there are other problems. Rick Harris, a longtime audio director, said there are actors who are just known for their loud stomach noises.

"I won't mention any names — actually, I'll mention the deceased and very talented Jerry Orbach, who, on very short notice, came in to do something, a title, for me. He had been up playing cards the night before. And I'd say his stomach noises were about as loud as his voice.

And you do cope. My original publisher was half right. The cassette did fade away, but the audiobook didn't — until this year and the recession, and competition from electronic books. This year, sales dropped, although things picked up in the summer. But one part of the market has continued to do well: downloadable audiobooks, books you listen to on your iPod.

Don Katz, president of audible.com, a leading online supplier of spoken word material, says he is optimistic. "I absolutely think the audiobooks are getting better: the level of sophistication of the narrative formats; the ways they are interpreted; the variance in kinds of formats; the decisions within the format.

"It's something that adds a whole layer of experience," he said.

Of course, there are those who don't like audiobooks. Critic Harold Bloom said, "Deep reading really demands the inner ear as well as the outer ear. You need the whole cognitive process, that part of you which is open to wisdom. You need the text in front of you."

I find that astonishingly unconvincing. I think that you can have a close and perfectly valid relationship with the text when you hear it. But I've met a lot of people who, when asked if they've read a book, hesitate and say, "Well, I've listened to it."

So is an audiobook a book? I asked audio producer Rick Harris. "Well, my feeling is that it is not a book," he said.

"An audiobook is a separate entity that is absolutely true. And a novel can be seen as many things, and one of the things it can be seen as is a script for an audio performance."

"[Bloom is] utterly correct in saying it's not a book, but it is another thing," Harris said. "It is an audiobook, and that has its own validity, its own limitations, its own strengths. The ear's ability to perceive nuance. The human voice is unquestionably the most expressive musical instrument there is. You combine those two, and you get an audiobook.

An audiobook is its own thing, a unique medium that goes in through the ear, sometimes leaving you sitting in the driveway to find out how the story is going to end.