Accessibility links
Cooking For One: A Privilege, Not A Chore In the run-up to a holiday synonymous with cooking huge feasts for crowds of hungry loved ones, it's easy to lose sight of the joy of making dinner solo. Food writer Nicole Spiridakis says it's one of life's simple pleasures — a chance to ask, "What would I really like tonight?" 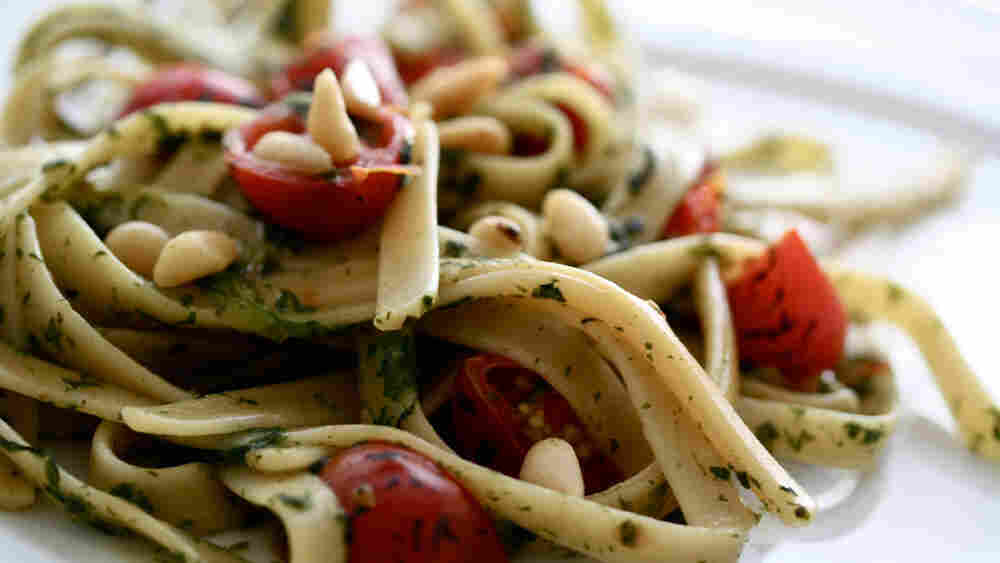 This fettuccine dish for one person is quick, easy and satisfying — and can easily be doubled for surprise guests. Nicole Spiridakis for NPR hide caption

The things we do for love: I've cooked eggplant for a boyfriend even though I hate it, experimented in vegan baking for Dad, banished my adored beets from salads because Mom can't stand them. But maybe the sweetest — and most surprising — love is discovering what a pleasure it can be to cook just for oneself.

I do love cooking for others. It's a way to provide not only simple nourishment, but also affection. I love the entire act of cooking dinner — from planning even the simplest Sunday supper of heirloom tomatoes simmered soft and slow with white beans, roasted potatoes and green beans from the market to actually cooking it, to then sitting down together.

Food is so often meant to be shared. 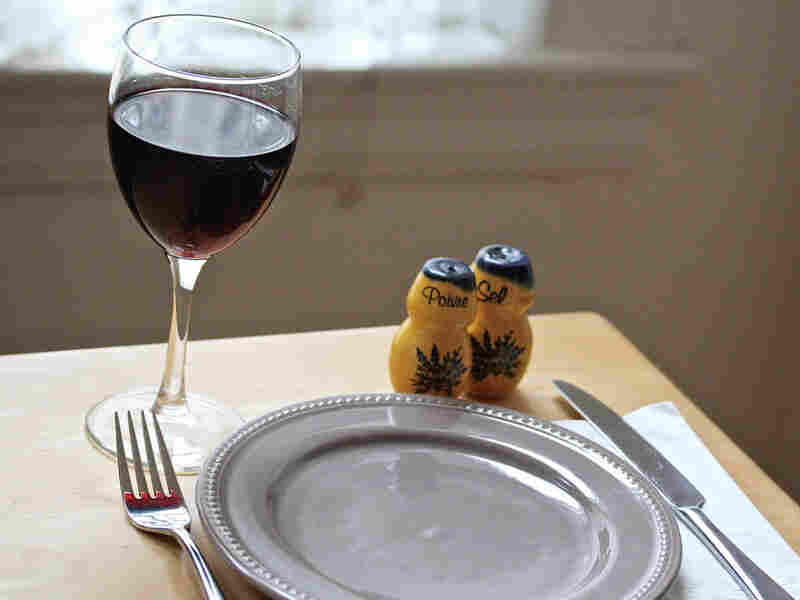 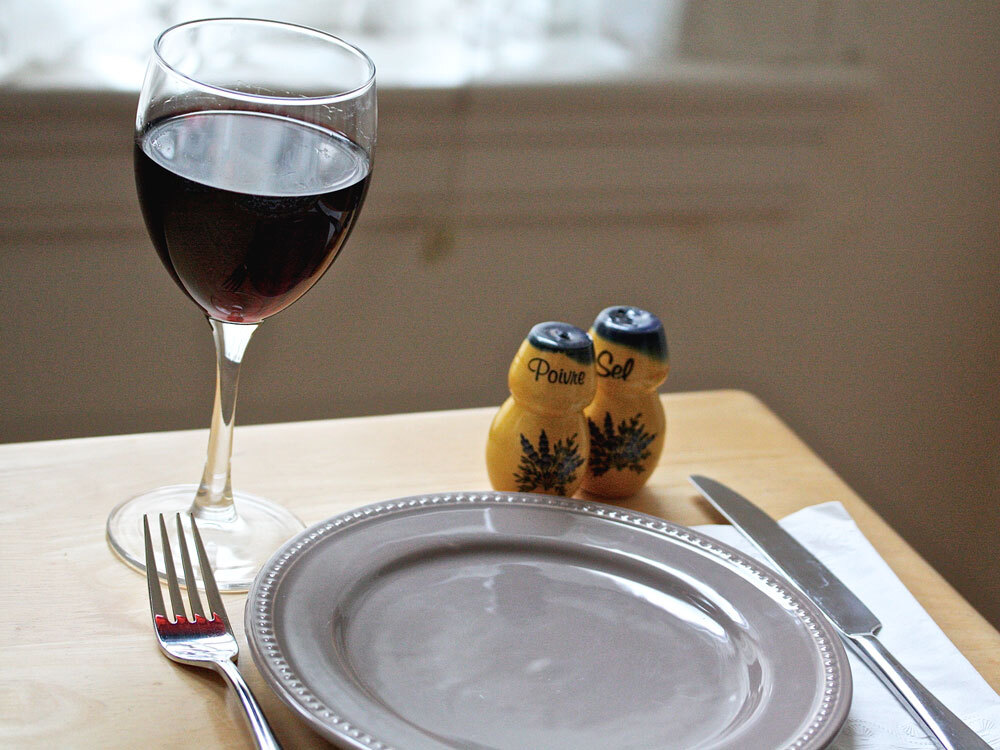 Get recipes for Fettuccine With Spinach Sauce, Sweet Potato With Black Beans, Tomato-Zucchini Bake and Fruit Crumble For One.

Yet there's also a joy in cooking alone. Judith Jones' The Pleasures of Cooking for One (Knopf 2009), which provides tips and tricks for the solo cook, and Deborah Madison and Patrick McFarlin's What We Eat When We Eat Alone, (Gibbs Smith 2009) crammed with stories and recipes about our secret (and sometimes guilty) pleasures, illustrate this theory. After a breakup last year — ending years of cooking for two — I found myself in the long-forgotten position of cooking mostly for one again. It was strange, but thrilling.

"What would I really like tonight?" I now ask myself while looking at the vegetables crammed in the drawer. What would make me — just me — happy to eat for dinner? Often it involves lots of roasted vegetables, quinoa, tahini, garlic, scrambled eggs with feta and pumpkin seeds.

Some Friday nights I arrive home late to the kitchen bare and still. The pots gleam, enticing me to rough them up a bit with olive oil, garlic and salt. After a long week, I might like nothing better than to flop down on the couch with a book and a bowl of potato chips, but I'm hungry and don't feel like going up the street to forage for dinner (potato chips, while delicious, do not a meal make).

Cooking solo also offers an opportunity to ... experiment with recipes ... taking a chance and substituting ingredients to make use of what's on hand. If it's not perfect, who's to know?

So I cook. I toss a handful of pine nuts in a frying pan and toast them on high heat, watching carefully to make sure they don't burn. Meanwhile, I boil water for whole-wheat penne, chop chard quickly in fine ribbons and wilt it in a bit of cooking water and tomato sauce. I throw in some feta and test the pasta. Almost. I pour myself a glass of wine, stir all the ingredients together and sit down at the table to watch night fall slow and sweet outside. Dinner just for me. It feels good.

Cooking just for me has led to roasted cauliflower and bread spread with good cheese, ravioli and a garlicky tomato sauce devoured so quickly it's good I don't have to worry about saving a lick for anyone else, salads full of radishes, broccoli, green beans, roasted portobello mushroom and red pepper sandwiches, big pots of vegetable soup to nibble on throughout the week — fairly easy dishes that make me feel as though cooking for one is a privilege rather than a chore.

The solo cook will be well served by a stocked pantry. Staples should include canned or dried beans, pastas, grains such as couscous and quinoa, olive oil and dried herbs. You also need a hearty appetite, a willingness to take a bit more time than heating up a pre-made meal and an immersion blender (for quick soups). Paring down and cooking dishes full of fresh ingredients nourishes both body and mind. Nearly every dish can be cut back for just one person.

Nicole Spiridakis lives in San Francisco and writes about food, travel and her native state on her blog, cucinanicolina.com. Her work has appeared in the New York Times, the San Francisco Chronicle, chow.com and other publications.

Cooking solo also offers an opportunity to page through neglected cookbooks and experiment with recipes that look appealing, adapting them to feed one or taking a chance and substituting ingredients to make use of what's on hand. If it's not perfect, who's to know?

I'm a vegetarian, so most of my meals involve beans or tofu as my main source of protein, but it's just as simple to bake a piece of fish with a little olive oil and lemon juice for about 15 minutes, and eat that along with a potato or a scoop of wild rice. A friend who regularly makes steak just for himself says it takes less than 20 minutes to go from pan to plate. There's no shame in cutting up a pile of fresh vegetables and eating them along with a bowl of hummus and some whole-wheat pita if that's all you find in the fridge. One key to successful cooking for one is flexibility.

Summer can be problematic for the solo cook because farmers markets are overflowing with fingerling potatoes, beets battered and sweet, stone fruits cheap enough to buy a whole flat and beautiful bunches of greens. This bounty is nearly impossible to resist, but I've finally learned prudence. (I've also learned to make good use of my freezer.) I'll make batches of pesto when basil is cheap. It makes a perfect quick meal. In the fall, I roast cauliflower from my favorite farmer with chickpeas and olive oil and pile it atop toasted bread. It's a nourishing and simple dinner that always satisfies.

Alone in my kitchen, time simmers and slows. The wind may bang against the windows, but inside, my oven hums along quietly. I leave butter to soften on the counter while I go for a run. I sift flour and brown sugar and core pears, hoping I have enough cinnamon in the jar to make an upside-down cake. I stir spinach into a pot of split pea soup and open a bottle of wine. It's a simple treat to cook by myself, with good music on in the other room, my apartment clean and cozy as I like it. It is mine, and I'm grateful to have it.

You may find yourself content as can be. As poet Daniel Halpern wrote, "Before you begin to eat, raise your glass in honor of yourself. The company is the best you'll ever have."

This is a sort of crustless quiche — perfect for a quick weeknight dinner along with slices of good bread or a handful of roasted potatoes. 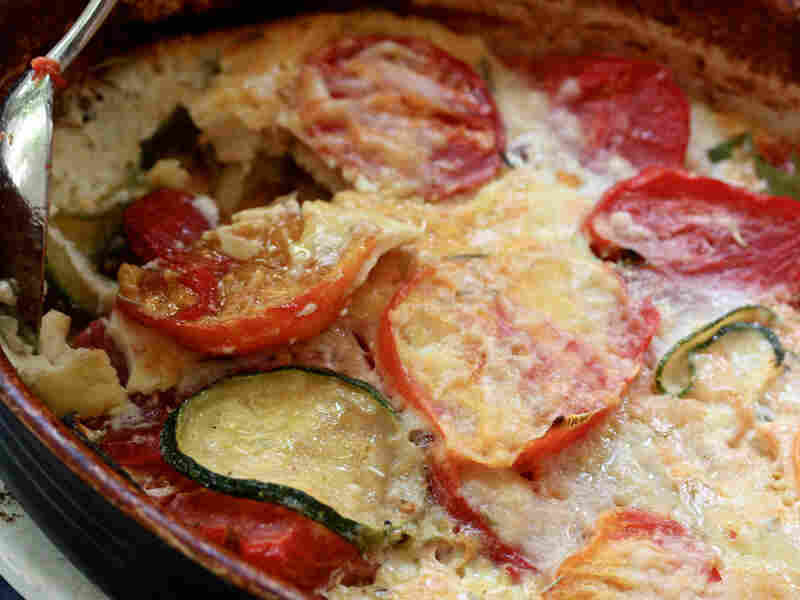 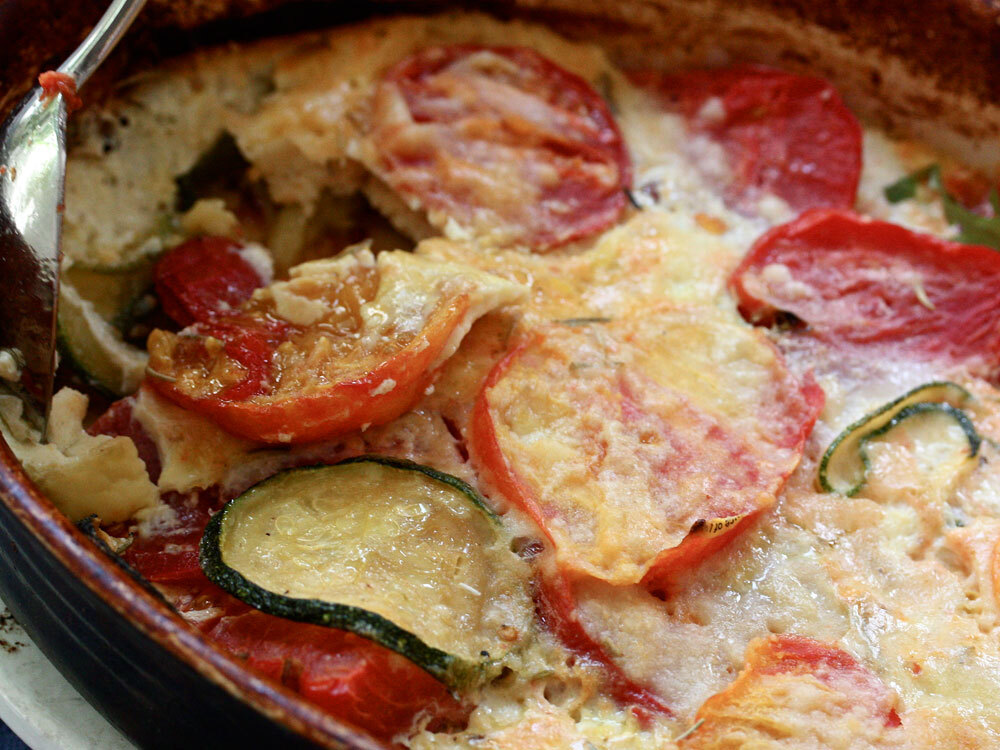 Put the vegetables in a bowl and add the flour, salt and pepper and basil and stir to combine. Add the egg and stir well. Pour into the prepared pan and bake for about 20 minutes, until the egg is set and the top is lightly browned.

This recipe is easily doubled if you have unexpected company or if you would just like leftovers for lunch the next day. The sauce can be made in advance and lasts for 5 days in the fridge. 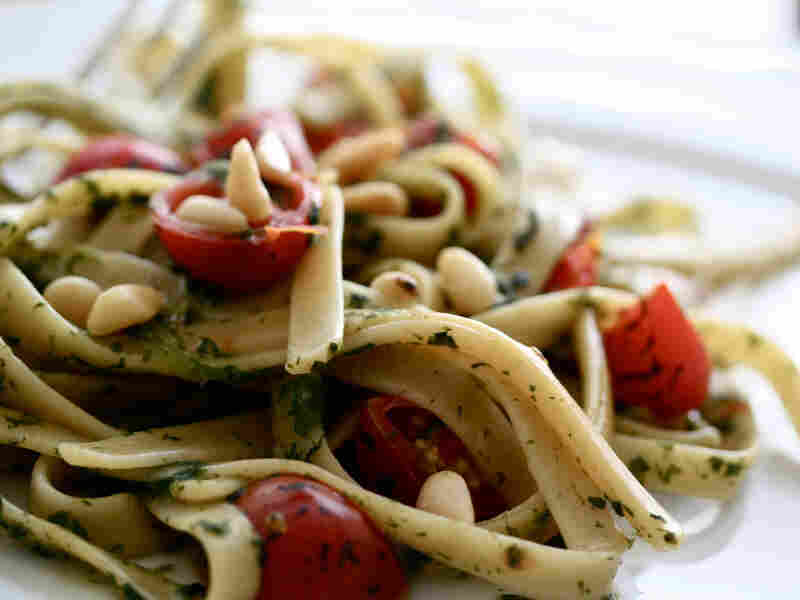 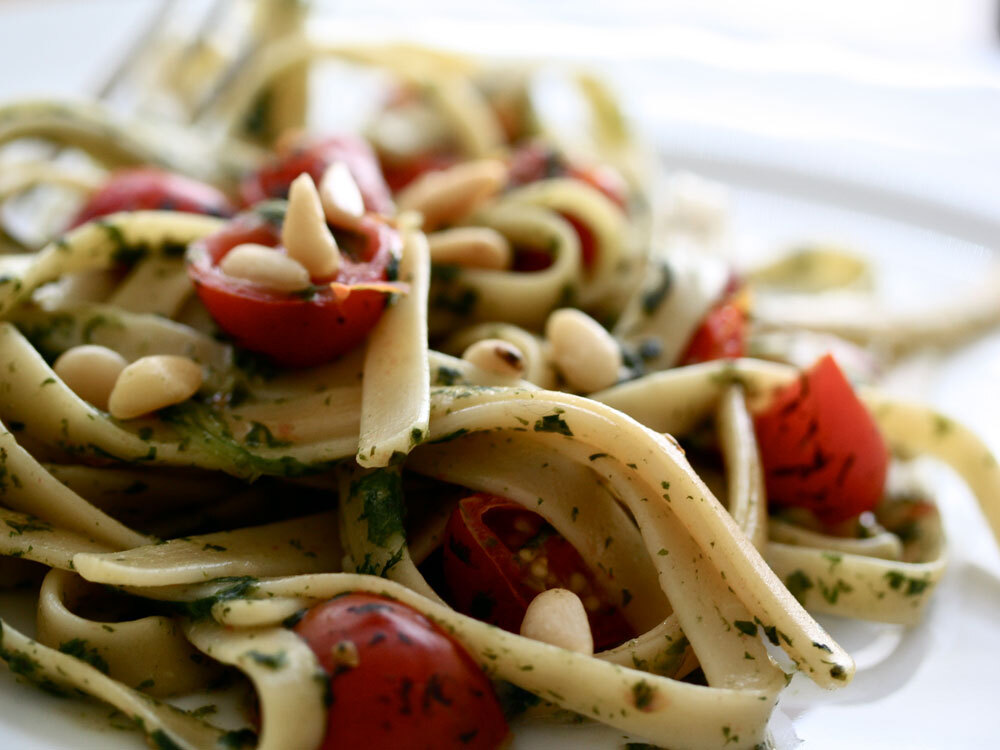 1 serving plus a little more fettucine

In a medium-sized pot, wilt the spinach in a splash of water over low heat, about 2 minutes. Add the milk and cheese and stir well until milk is hot and cheese is melted.

Remove from heat and, with an immersion blender or food processor, puree the sauce until smooth. Toss with the pasta to coat and add the tomatoes and pine nuts. Add salt and pepper to taste.

I think of this as one of the most compact — and satisfying dinners — I prepare for myself. Add a green salad, and it's a well-rounded meal. Other additions to the beans could include a handful of fresh or frozen corn or some chopped spinach or chard. 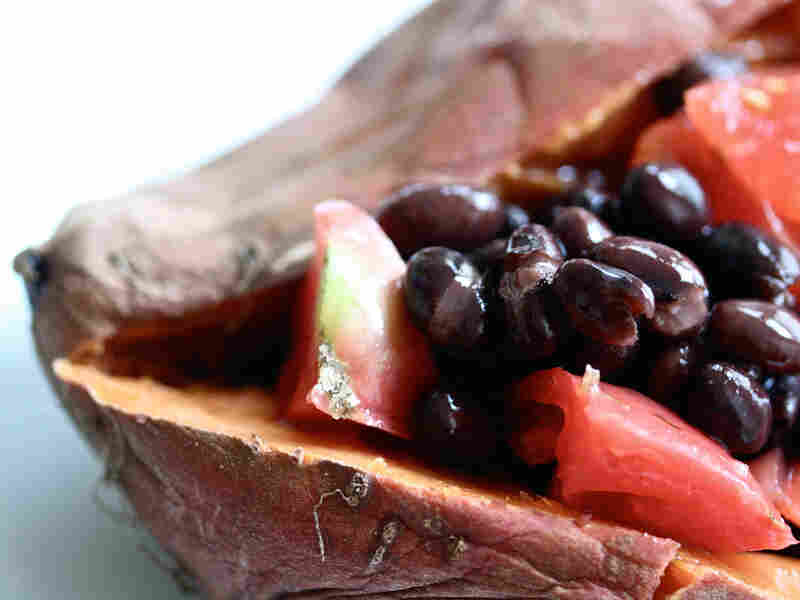 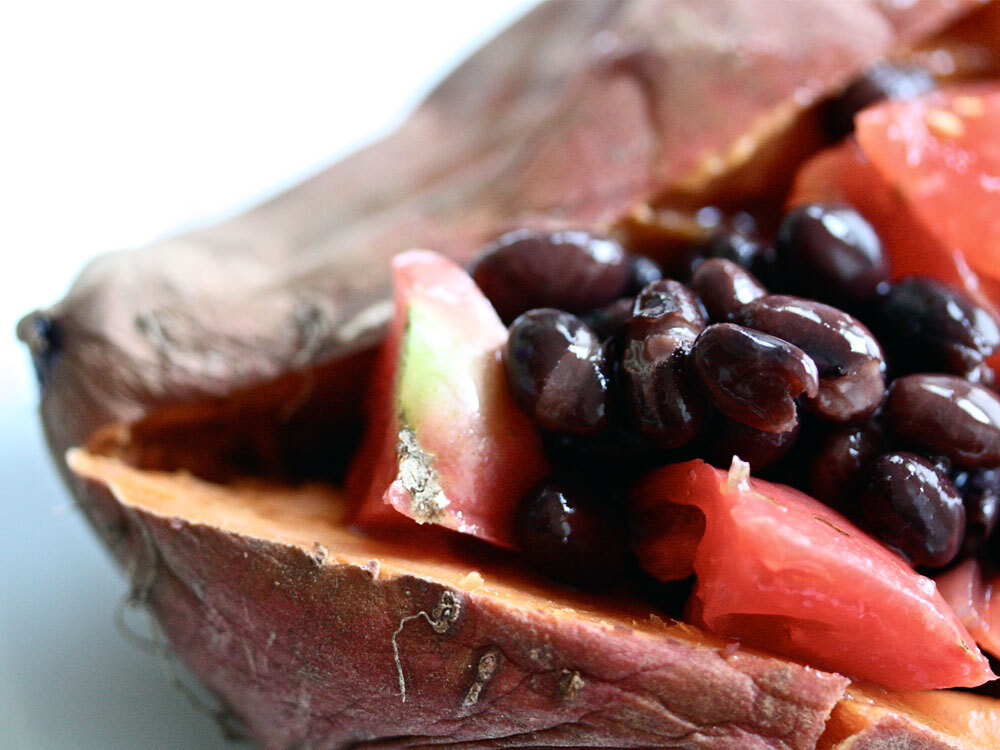 Prick the sweet potato with a fork and put it on an ungreased baking sheet. Bake for about an hour, until the flesh is tender and splitting.

In a medium-sized pot, heat the olive oil and saute the onion until translucent. Add the tomato and cook a few minutes more. Add the beans and lime juice and stir well to combine.

When the potato is cooked through, put on a plate and cut lengthwise. Spoon on the bean mixture and top with avocado slices.

Fruit Crumble For One

Desserts can be challenging for the solo cook. Should you really eat that whole cake yourself? Cookie dough can be made and frozen to make later in small batches, but this little crumble for one makes a sweet ending to any meal. 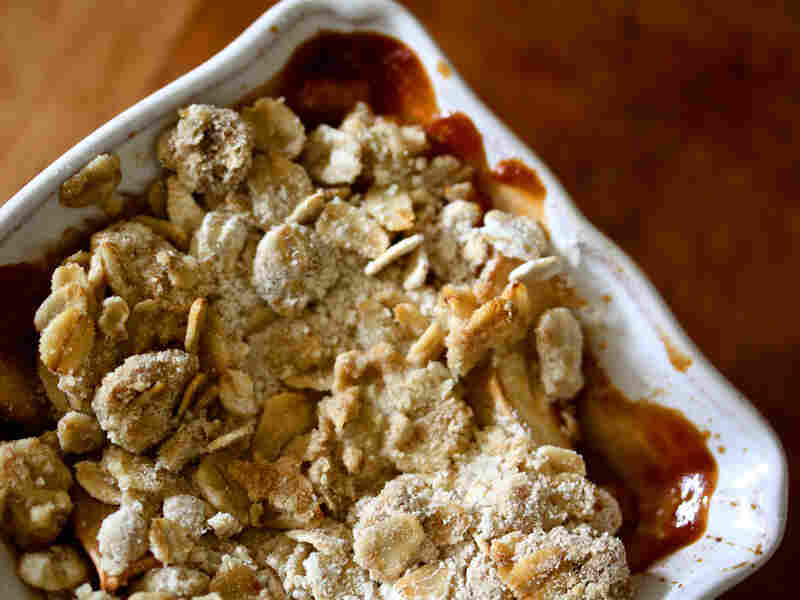 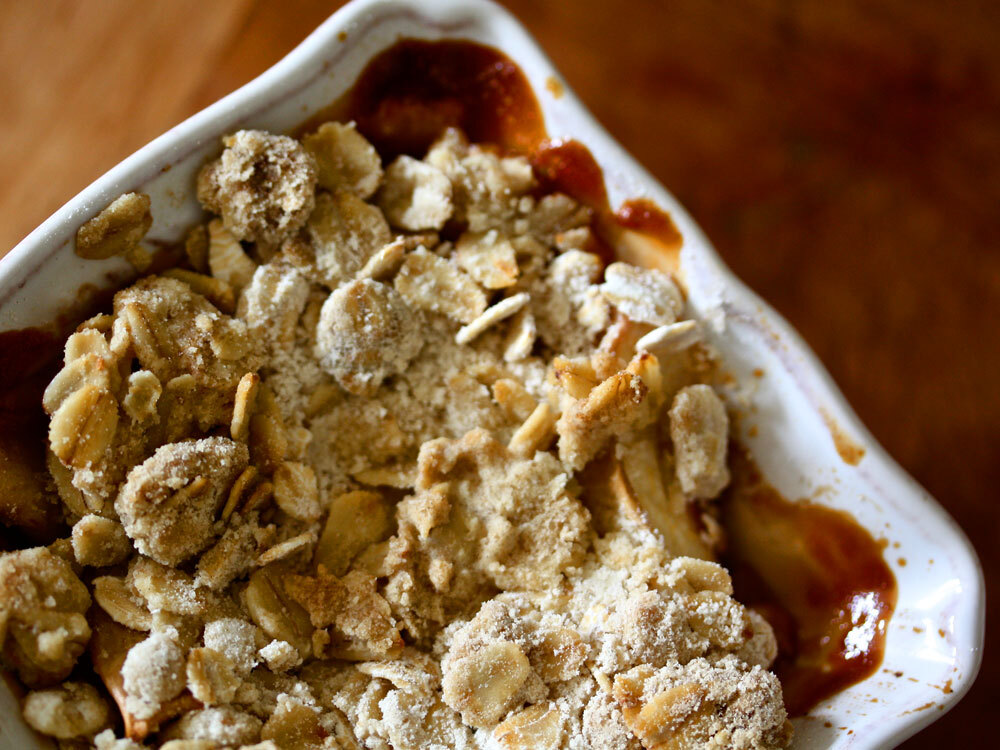 Position a rack in the center of your oven, and preheat the oven to 350 degrees. Oil a 10-ounce baking dish.

In a medium bowl, whisk together the brown sugar, flour, cinnamon and ginger. Add the fruit and gently stir to coat. Arrange the fruit skin side up in the dish.

In another medium bowl, whisk together the dry ingredients for the topping. Add the butter or olive oil and, using your hands, crumble together until it loosely holds together.

Spread the topping evenly over the fruit and bake for 15 to 20 minutes, until the top is browned and the fruit is bubbling.